After giving the LeMans token updates for several years, Moto Guzzi made some great modernizations in 1993 and named the result after another endurance racing classic – Daytona.  With help from the brilliant gentleman racer Dr. John Wittner, Guzzi fielded the four-valve per cylinder 1000cc engine in their long stable chassis.  Though built in low numbers and not that many years, the Daytona 1000 lives on, this one in new livery and some carbon bits. 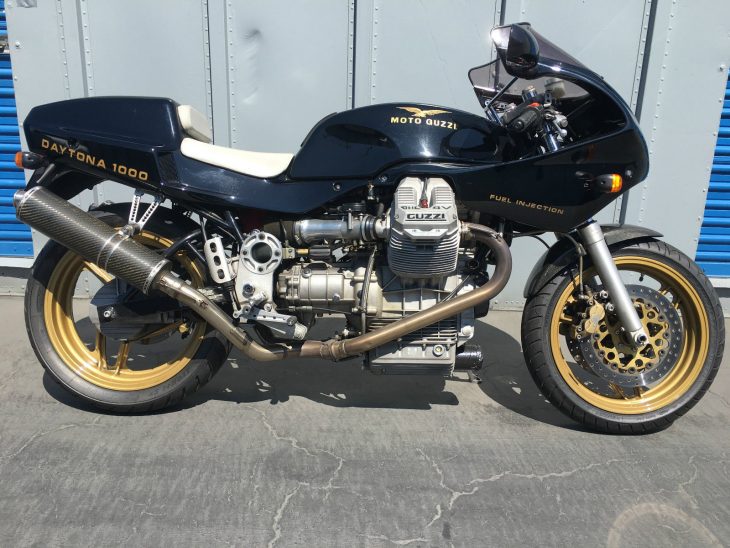 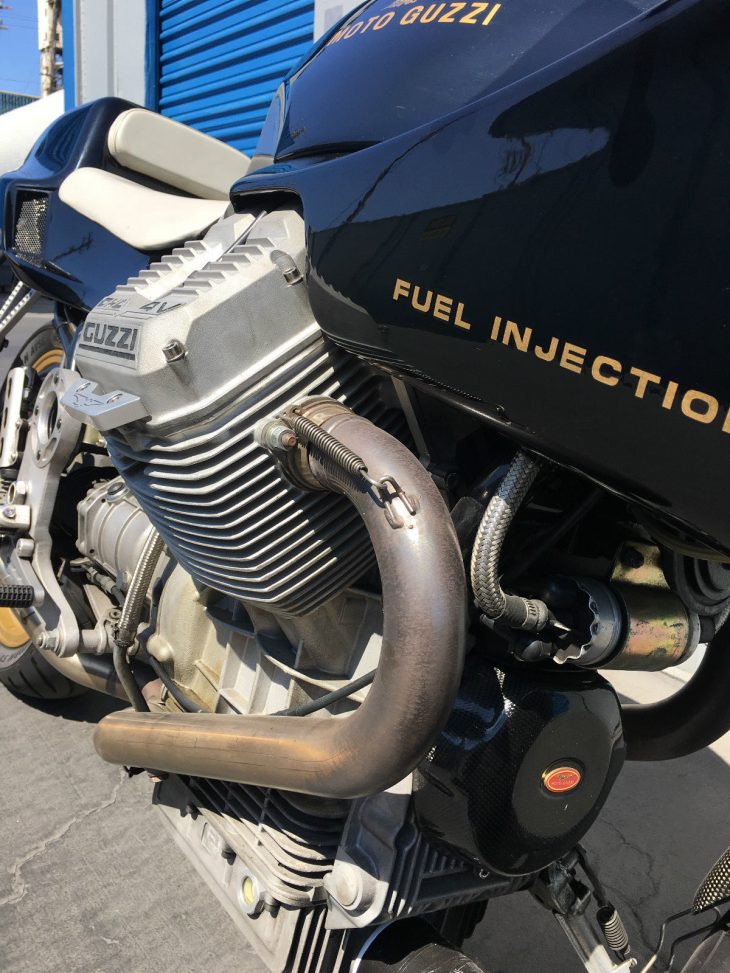 Fuel injected for the first time, the Daytona’s 992 cc’s generate 102 hp in a wide torque band, and only a 5-speed transmission is required.  While the new heads have belt-driven single overhead cams, the inboard arrangement leaves room for air-cooling fins, saving the water system and preserving the excellent sounds. 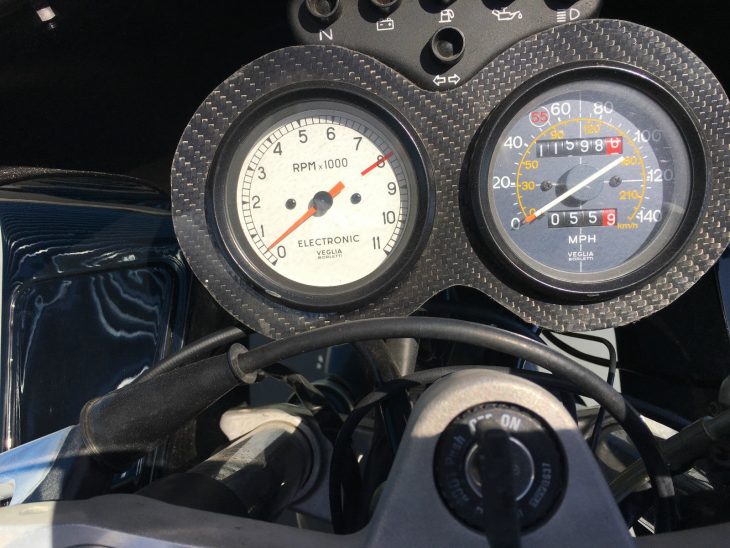 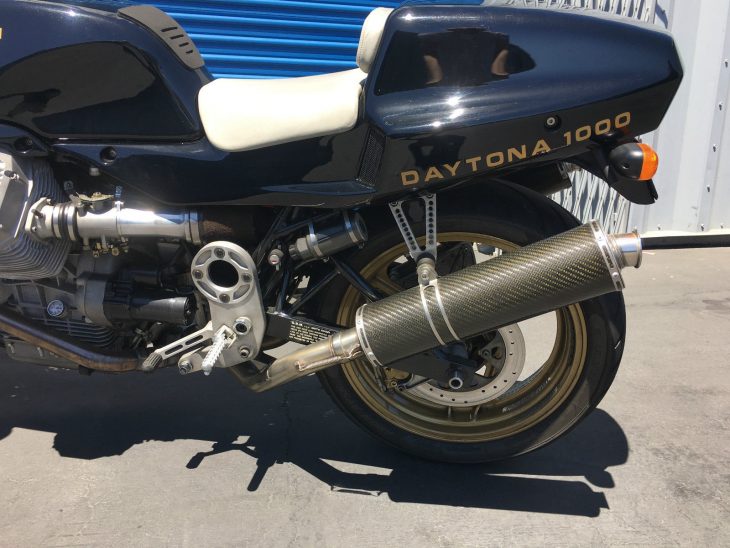 The engine is a stressed frame member, and the large frame / footpeg connectors have been made into more of a statement.  Up front are triple-adjustable Marzocchi forks, with WP monoshock supporting the shaft drive rear end.  Brembo supplies the linked brake system with 320mm front disks and 260mm rear.  Bodywork is a sharp upper-only fairing with a roomy monoposto seat fairing. 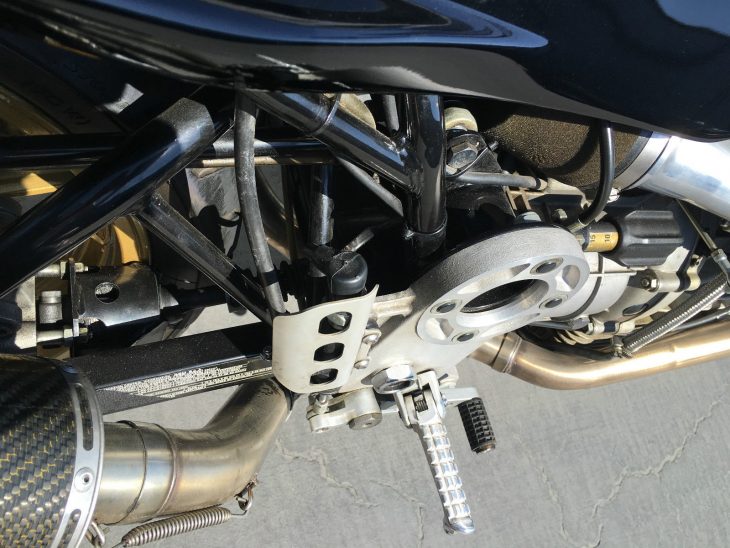 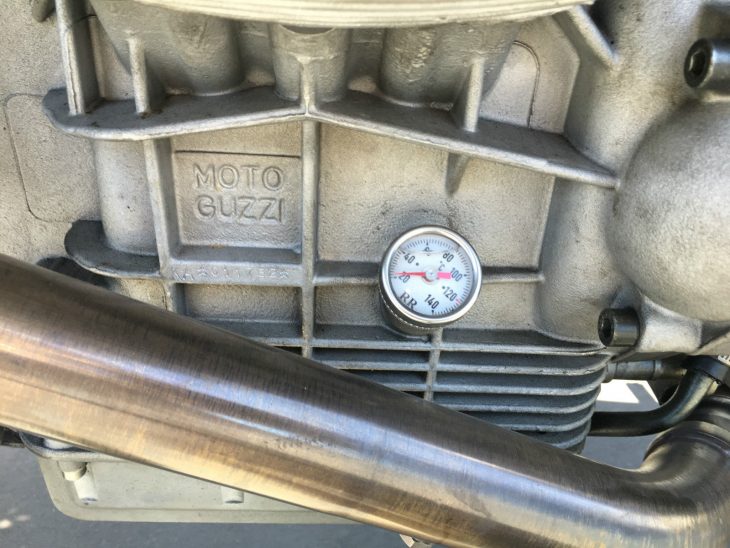 With a fan’s head guards and oil temperature guage, and at one time a cover model, this Daytona 1000 has been relieved of its red paint, now a stealthy black with carbon mufflers, front fender, and dash.  The gold highlights impart a retro-classic look.  From the eBay auction:

This bike features Termignoni mufflers, free-flowing exhaust header system (no can), Power Commander, Stage 1 engine performance kit, gorgeous black paint with gold logo transfers, gold powder-coated wheels, Marzocchi forks, Brembo brakes, and Works Performance rear mono shock.
Number 5 according to the VIN, it was featured on the cover of Mick Walker’s Moto Guzzi Buyer’s Guide, back when it was still red.  Stock HP was 98, this one definitely has more.  Tremendous exhaust note!
Included is a stack of receipts, including the original purchase receipt and a charming typewritten (!) letter from the factory to the buyer, thanking him for his purchase.  Also included is the stock black front fender. 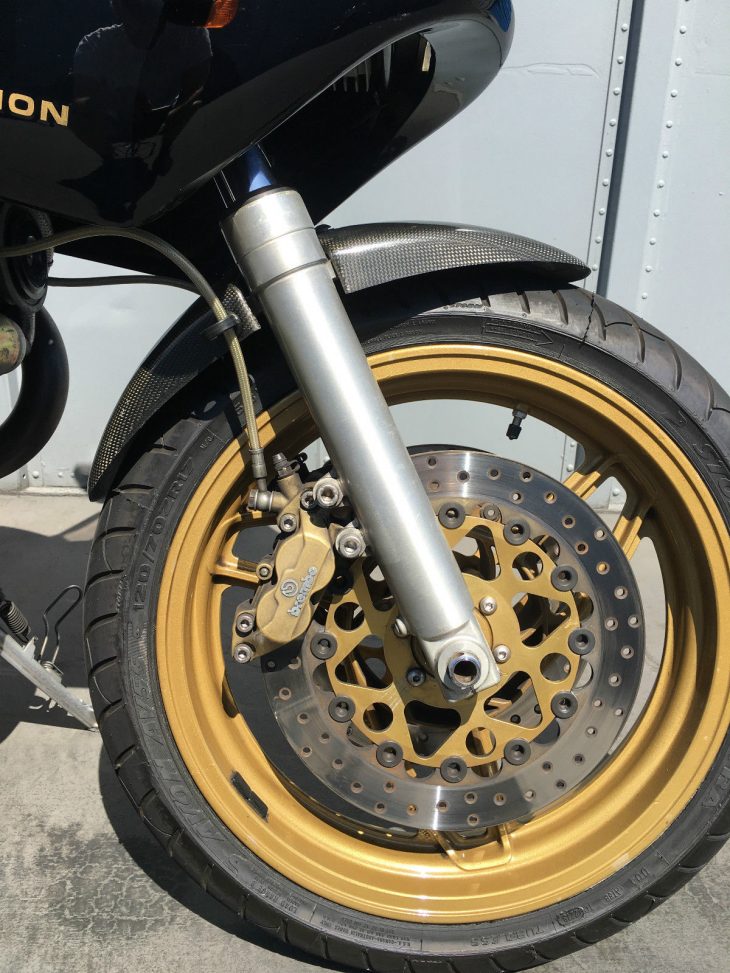 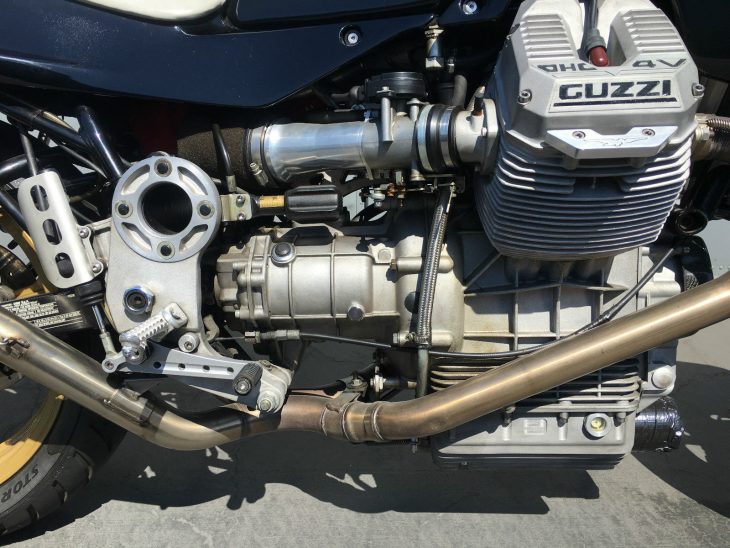 Though the Daytona’s arrival breathed a lot of performance into the big air-cooled twin, it only made up some of the ground to the fast-moving sportbike evolution, and the bikes remained an individualist statement.  They reviewed very well, with plenty of oomph, great stability, and only a smidgen of longitudinal twin or shaft-drive oddity.  This example would be a great find if your aim is more café than WSBK…