1994 brought a second generation of 900cc Kawasakis, with great carburetted power, the roadability blurring the sport / GT lines.  Here are two early ZX-9R’s, the ’94 with garaged forever and very nearly a show bike, the ’95 with some performance mods and miles but still excellent. Succeeding the legendary GPZ-900R, the ZX-9R’s designers left very little to chance.  Using the chassis configuration and ram air delivery developed for the ZXR-750, the 899cc machine is a stable handler and boasts 139hp at 10,000 rpm.  Front brakes are 310mm 4-pot Nissins, and wheels are 17-inch all around.  The full fairing protects a six foot rider and both of these are done up in Kawi’s green, white, and blue, though red and blue schemes were also available.

Our 1994 is in very special condition and seems to be a 1.1 owner bike, with very limited alterations. The new owner is about to return the rear fender to stock, and says this in the eBay auction:

For sale exceptional condition ZX9 with undamaged original parts with tastefully done additions.  Adult owned which you can tell by photos bike is in almost museum condition – original owner was 65 at time of purchase of this just two weeks ago.  Only modification done to this bike was a fender chop by the owner and it left the plastic under the seat opened at the extreme rear of the bike, storage still intact, but I found a used one uncut on Ebay that is on it’s way as I currently type this.  The bike is mechanically perfect No Issues at all.  Runs perfect, shifts great and runs cool – the owner really took pride in this bike.  I am only selling this bike because in it’s condition it would be best for someone who has to space to keep it exactly as it is now, and I don’t.  It is not a kid’s bike, it has a lot of torque. It has Vance and Hines carbon exhaust, a Vance and Hines ignition tuner and PM wheels that you see in pictures – these had to be purchased when it was new because you would never find those parts in the last fifteen years.  The bike had to be stored in a climate controlled area because it has NO sign of age period. Nothing faded or dry rotted – for the most part new condition other than 11,000 miles which I put the last 150 on it.  Ready to ride and respect – needs NOTHING.  I forgot it has a Corbin Seat front and rear that are in great condition, I know I don’t have pictures of the left side it’s the same as the right, perfect.  NO damage, period.  I added more pictures to see quality of paint and more details.

The 1995 has been used somewhat more, though still relatively low miles for the age.  The exhaust and Stage 1 jet kit indicate a bike that has been enjoyed more, with a couple of scuffs but certainly could be dolled up with ease.  This Ninja has the opposite owner history, changed hands early and has had the same owner since 1995. 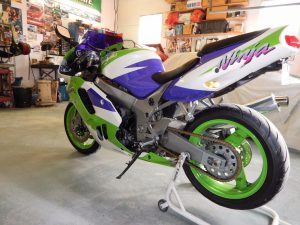 Selling my ’95 Ninja ZX9R. I bought this bike in the fall of ’95 from the original owner (a co-worker of mine). The bike is in great shape and wicked fast. Rarely ridden in the rain and garage kept with only 18k miles. Runs excellent. The large frame bike is slightly modified with a Stage One jet kit, Regina X-Ring chain, NGK racing wires, Vance and Hines SS2R complete exhaust, purple windscreen, rear tag LED’s, and K&N air filter. The stock front turn signals have been replaced with mini-stalks while the rear have been integrated into the fairing where fake venting used to be. The shock reservoir has also been re-routed from the right side frame to underneath the seat out of view. Tires are Dunlop Sportmax and the rear fender has been bobbed. Battery Tender also included.

Most of the photos were taken pre-inspection. Note the new EBC Vee-rotor rear brake rotor and pads, chain guard, as well as reflecting tape in one of the right side pics, all installed as a result of Maryland state inspection.

The ZX-9R reviewed as a deserving carrier of the Ninja mantle, a strong sportbike with street sensibilities, though its weight and factory suspension didn’t make it an out-of-the-box track weapon.  Ergonomics were a little friendlier than some others even without adjustability, and a somewhat clunky transmission was helped by a factory slipper system.  Both have reasonable buy-it-now’s, and peculiarly the creampuff 1994 is a little less.  Either would be great for a fan, a rider, or a concours buff – or buy both and have rider and show bike !