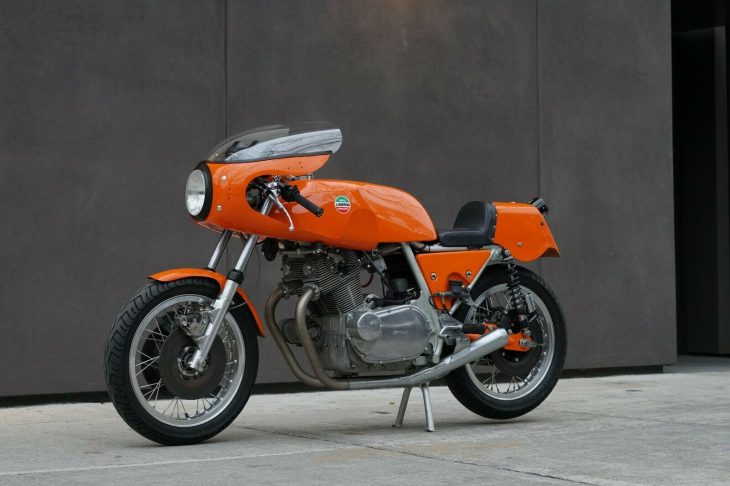 We don’t post a ton of “classic” sportbikes here, but some motorcycles transcend the era in which they were built: the bevel-drive Ducati 900SS, the Moto Guzzi V7 Sport, Norton Manx, Vincent Black Shadow, Kawasaki ELR, Honda CBX, and this bright orange Laverda SFC are iconic enough that they fit in just fine among machines decades newer. Quite literally a race bike with lights, the SFC or “Super Freni Competizione” was a high water mark for the marque, and always makes me sad they’re not currently in business. I think the world has room for a stylish, overbuilt motorcycle with great handling and Italian charisma. I picture something like a Triumph Thruxton R with Ducati SportClassic style… 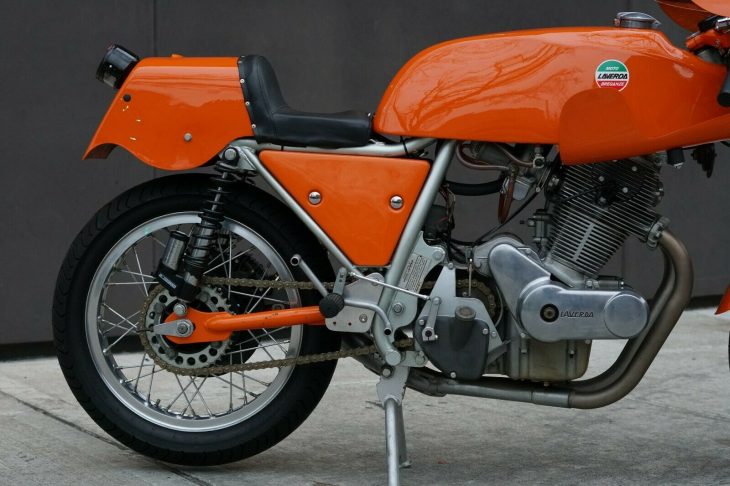 At the heart of the machine was an air-cooled, 744cc two-valve, overhead-cam parallel twin supposedly patterned after Honda’s CB77 Superhawk and built to last, with five main bearings. The SFC shared the same engine with the more street-oriented SF1, although the SFC included the usual period upgrades to improve performance: larger valves, head work, different cams, balanced and polished internals, bigger carbs… The result was somewhere between 71hp and 81hp, depending on the year. They were all hand-built and dyno-tested and rolled out pretty much ready to compete in endurance racing events. Just remove the lights and add a numberplate. 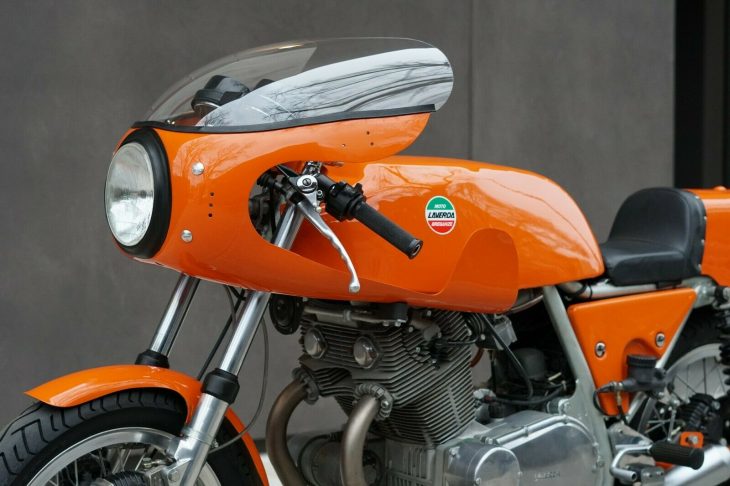 Unlike other Italian manufacturers of the period, Laverda’s goal was to use the very best parts in their motorcycles, regardless of origin. So while the suspension and frame were by Verlicchi and Ceriani or Marzocchi, respectively, they used Nippon-Denso electrics, and Bosch ignition components. It’s significant that Laverda named their bike after its braking ability: Super Freni Competizione basically means “super competition brakes” and the early machines featured a massive magnesium brake drum out front with a similar unit out back. 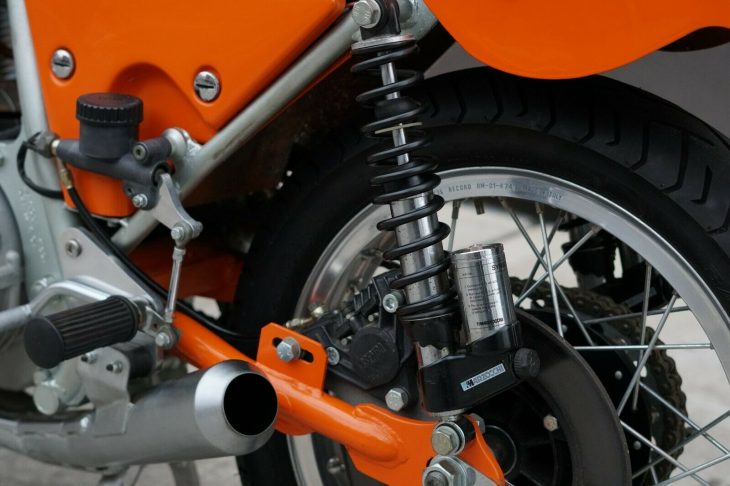 Later machines moved to twin discs out front, with a matching disc in the rear, but the result was the same and Laverdas stopped as well as they went. In 1974, the frame was updated to lower the center of gravity and reduce weight, and to improve handling with revised suspension geometry. Fewer than 600 SFCs were ever made, making this one of the rarest examples of an already exclusive marque. 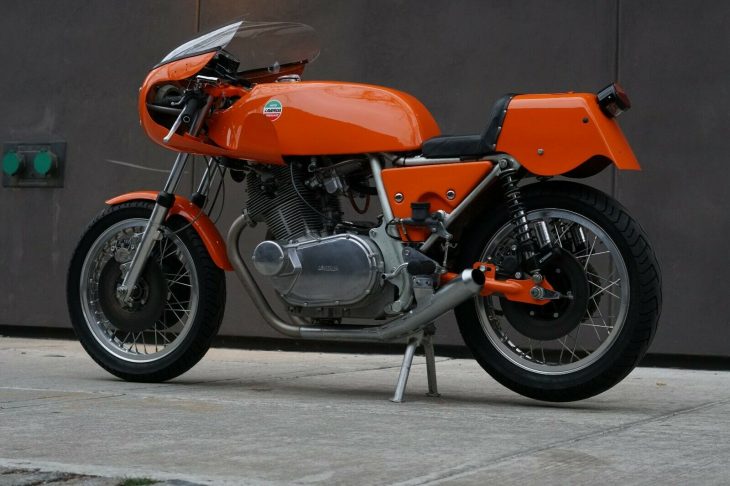 From the original eBay listing: 1974 Laverda SFC for Sale

At only approx 541 units produced, the Laverda SFC is one of the best bikes for the buck you can collect and ride! this is a street legal factory race bike that pumps out approx. 70HP, it’s fun, fast and vicious– to me the SFC is the pinnacle of 70’s Italian sport bikes, it hits all the marks and its built like a tank. This is the closest bike in feel to a Lamborghini Miura.

At this point I can say with some authority, that I have owned, bought and sold more SFC Laverda’s then just about anyone in the US, if you look in previous sales, this bike is just 12 bikes later than the last SFC that came through the shop.

Every SFC is slightly unique, every bike has a story. This particular example has been in private ownership for the last 10 years, the current owner had the noted Laverda craftsman Scott Potter do a complete frame up rebuild with the intention to ride her on the beautiful California coastal roads. At this point a new Steel tank was acquired and paint matched to the rest of the bodywork, new parts were used as needed and the rear shocks were upgraded.

As the bike had been sitting, I decided to give her a once over and clean and replace the jets, set the points. After putting in some fresh fuel, this BEAST roared back to life. The time and money spent on the rebuild was obvious as the quick pull of the throttle felt the parallel twin whip the bike back and forth, the feel of the SFC is unmistakable. BUY, RIDE, COLLECT. 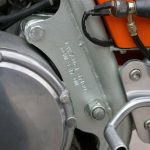 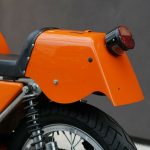 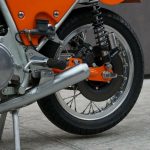 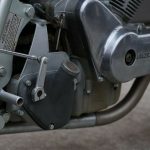 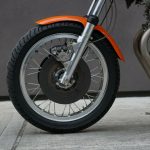 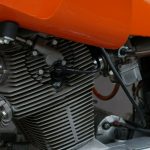 If you’re not familiar with Moto Borgotaro, they’re a restoration shop over in Brooklyn, New York and have had a number of very nice Laverdas pass through their hands. This example looks basically perfect, with just 4,304 miles on it, and the seller is asking $58,000. 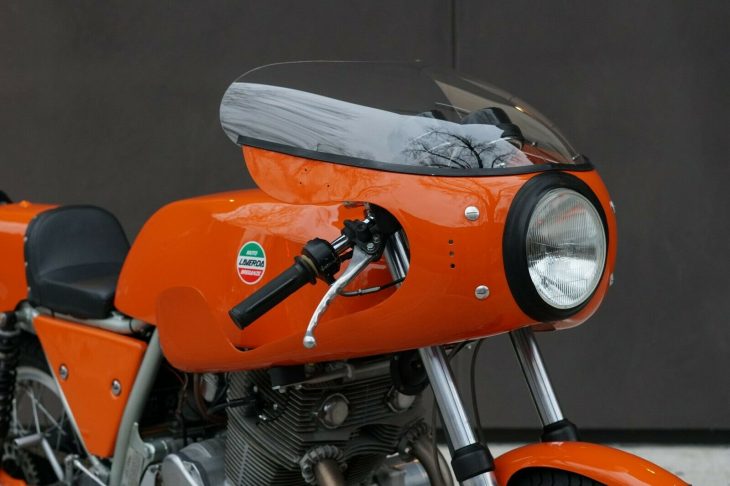