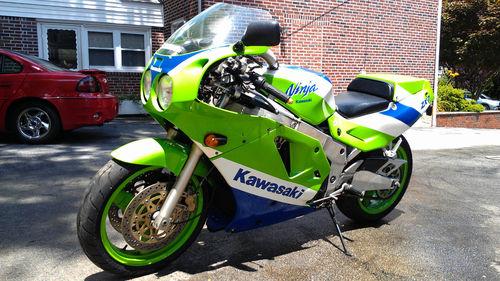 Remember the days when you could tell a motorcycle brand by the colors on the bike? Back in those days, Yamaha sportbikes were red/white and yellow/black, Honda was always Ride Red along with the red/white/blue Interceptor scheme, Suzuki was largely blue/red/white, and Kawi was *always* green. Today, this distinctive green paint scheme is the only color that screams brand recognition (although don’t get me started on the ZX14 metal flake & glitter look). 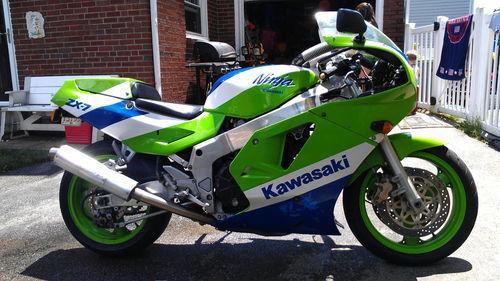 While not a vaunted RR (K1)model, this ZX-7 H2 series bike still looks pretty good. It is 22 years old, after all (and would be able to drink and vote if we gave bikes such priveledges), and still looks every bit the focused sportbike that it is. Some may point to the elephant trunk snorkles leading to the airbox under the tank and laugh, but ram air performance was relatively new back then and the promise of free turbocharging was very real. Since that time, there is no major manufacturer that does not incorporate some concept of ram air on their sportbike. Kawasaki lead the way. 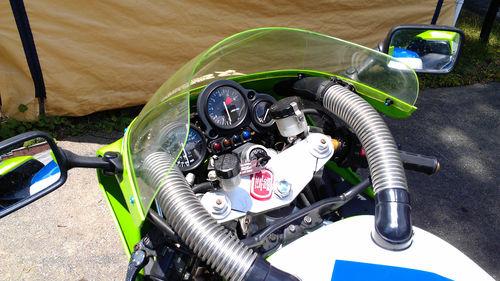 The seller offers some history on the ZX7 line here:

The ZX7 line started with the “H” models. The H1 looked uncannily like the first model of the ZXR-7 racer. The rear suspension was very hard. This was chiefly due to the suspension linkage and, to a lower extent, to the hard rear shock.
The updated H2 inherited most of the Racekit engine mods found on the ZXR-7 Race bike. Although the H2 looks very similar to the H1, both engine and frame underwent a lot of positive changes. A host of carbs, radiator and engine mods mean that parts are often not interchangeable with the H1, and performance was substantially increased. The rear suspension was still pretty stiff on the H2, but now fully adjustable. 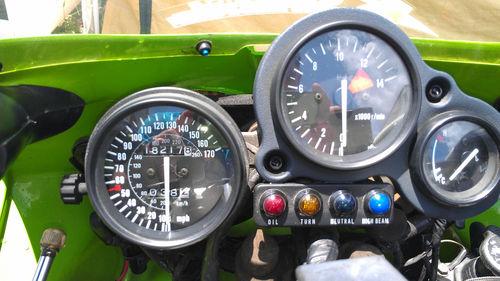 From the seller:
Up for sale is my 1990 Kawasaki ZX7, model H2.
This is a very rare and sought after bike, and the H2 is always more desirable than the H1. (1989)
This bike is in overall good condition, for a 22 year old survivor. Not many of these left, especially in turn key condition.
It has its share of nicks and marks, some chipping on the wheels, etc. Left side fairing has a crack on the bottom, and some clear coat orangepeel in the right side fairing. Seats are perfect, no marks or rips, very nice. All instrumentation works as it should. Bike has just been pulled from storage, oil changed and new battery installed, started right up and runs like a BEAST. Has a steering stabilizer and flush mounted custom blinkers. This ZX7 has a custom MUZZY Race exhaust installed w/headers, and it is not your typical MUZZY pipe, sounds very aggressive and much meaner than the others I have heard.
Bike is a screamer… ~18K miles…
Also, as an FYI, this bike comes fully wired so its a great grab for the racer or track day enthusiast, ready to go!!!! 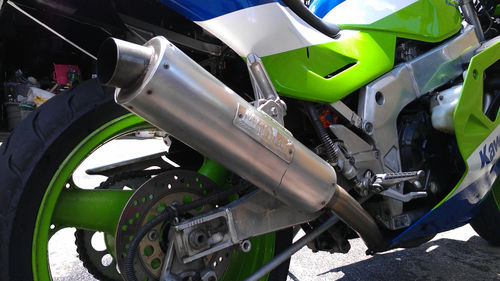 The seller has also included a video of the bike in question. The sound is not the best, but it does give you a good idea as to the overall condition of the machine:

While the market for non-homologation bikes continues to languish a bit, this is a good thing for the nostalgic amongst us; these neo classic bikes can be picked up for a song compared to both the new price as well as the homologation counterparts. For more information and pictures, click the link and jump over to the auction. Good Luck!