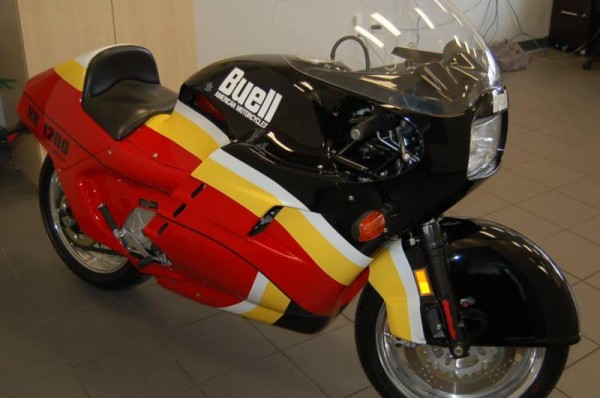 Erik Buell started his engineering career at Harley Davidson, but left H-D to pursue an opportunity to market Buell Motor Company 750cc two stroke racebikes to privateer teams competing in the AMA Formula 1 series. The racebike stint was short lived, as the AMA discontinued the series in favor of Superbike less than a season later.

Buell then turned to streebikes. He obtained a large quantity of XR1000 motors via his contacts at H-D, and he used these to create the RR1000. Between 1987 and 1988, Buell delivered 50 bikes to customers, placing the Buell Motor Company on the map. When his supply of XR1000 motors ran out, Buell adopted the new H-D 1200cc Evolution engine, upgrading the bike and making the necessary changes to package the new powerplant. Through the 1989 model year, Buell created an esitmated 65 RR1200 bikes; this is one such machine. 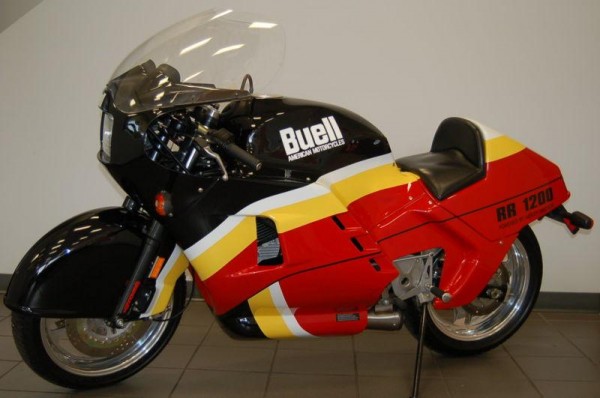 Notice how these early Buells contain many of the iconic features seen on later bikes. The Uniplanar engine mounts – to allow the engine to be used as a stressed member while still isolating the vibration of the big twin – continues to be a patented feature on modern Buells. This bike also shows the under-the-engine suspension and exhaust – both necessary compromises to package the big twin.

From the seller:
The history of this RARE motorcycle is part of Harley-Davidson’s success in Canada. Legendary enthusiast, racer and man behind the largest importer of Harley’s in the world(Trev Deeley) brought this machine into Vancouver as one of only three ever to be imported into Canada. I am sure that Trev did all he could do to promote Buell, simply becauce of Buell’s brillance and innovation as a motorcycle racer. Stories of this RR1200 in the window of Deeley’s east Broadway motorcycle shop are consistant…”so many traffic rear-enders distracted by the Buell in the window”…the machine was removed from it’s display. From the spot light to the warehouse; that’s where the RR1200 sat for some time. One of Trev’s racing pals eventually purchased the RR1200 and moved it into his private collection. 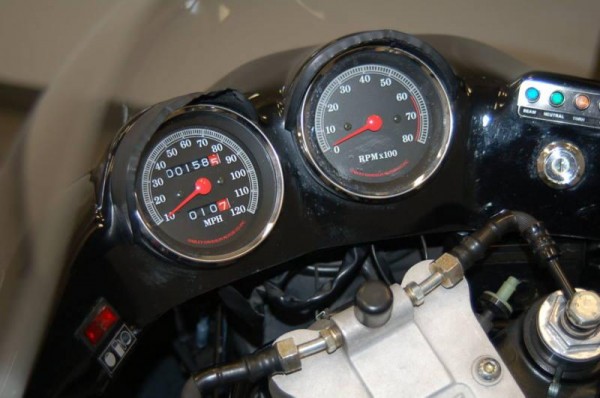 Very rare, very low miles, and never registered – to be honest I’m not even sure where to begin concerning pricing on this one. Thankfully, there are many bidders out there who are currently showing the way. While the auction opened below $1k, bidding has been very brisk; at the time of this writing the price has risen to over $14,000 and the reserve is still in place. This bike is a very unique piece of motorcycle history. With its aerodynamic wrap-around fairing, color scheme straight out of the 1970s, thundering performance and interesting back story, the next owner will be very lucky indeed. To check out the pictures and details or to watch the sprited bidding, . Good luck!