As Laverda rose from the ashes of the 1970s, they saw Ducati as a natural rival, inspiration, and target. Yes, I know that Laverda continued to produce new motorcycles into the 1980s, but those were just 1970s engines wrapped in new clothes, a pattern that would continue when the company was reborn in the 1990s… So as the 750S was intended to target the Ducati 748, the Boys from Breganze needed something to compete with, and hopefully sell as well as, Ducati’s parts-bin success story, the fabled Monster. Enter, the Laverda Ghost Strike. 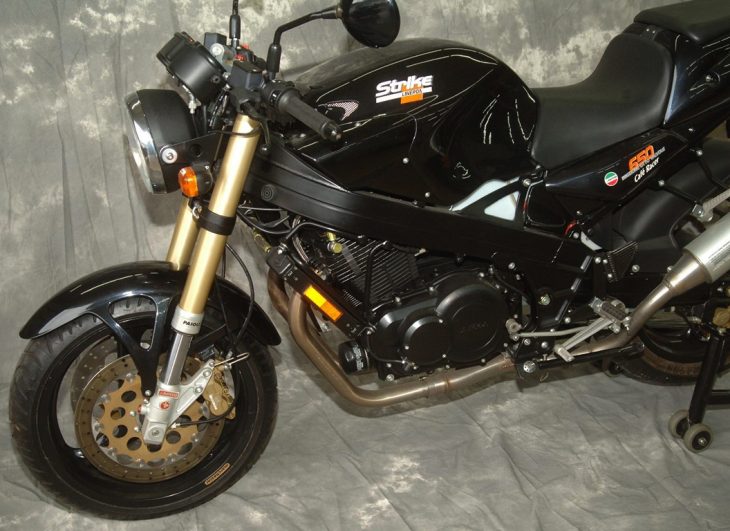 The original Ghost used a trellis-style frame apparently intended to mirror the Ducati Monster, although the restyled Strike version seen here used a beam frame designed by the famed Nico Bakker, along with restyled bodywork and a twin-headlamp setup in a handlebar-mounted bikini fairing. Interestingly, the Ghost was available with both trellis and aluminum beam frames concurrently to suit different stylistic tastes. Fortunately, geometry and weight are identical, so the bike’s excellent handling was unaffected. 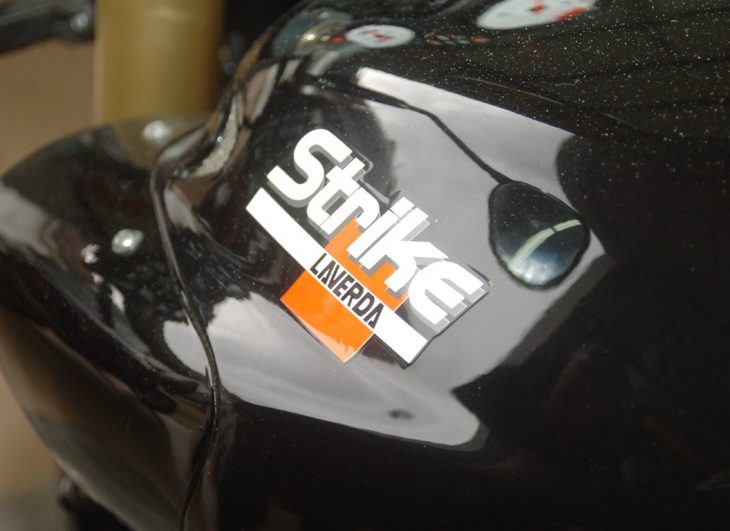 High-quality components like Paioli suspension and Brembo brakes spoke to Laverda’s serious intent, and the bike was one of the first production motorcycles with a centrally-located fuel cell. In this case, the aluminum cell is fitted behind the engine, leaving the “gas tank” to be an airbox, possibly to the confusion on new riders and onlookers since there is no gas cap, just a blank expanse of plastic. The actual filler cap is in the tail, under a plastic panel or a pillion pad, depending on what mood you’re in that day. 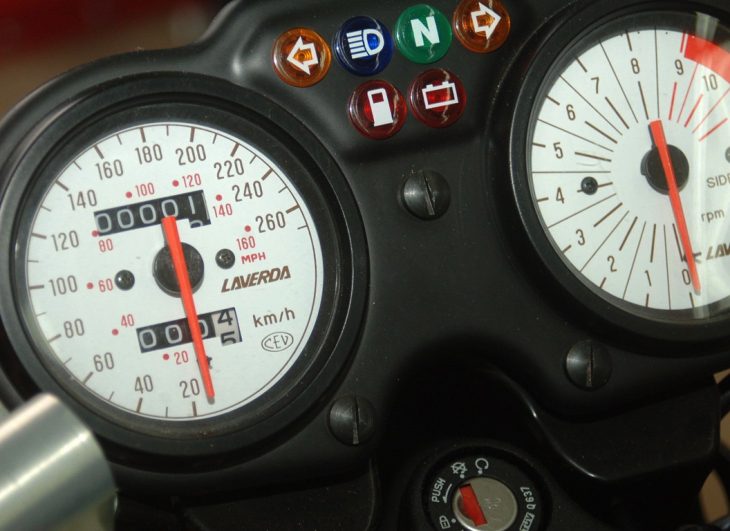 It was the engine, a development of the 500cc parallel twin first seen in the Alpino and introduced way back in 1977, was always the Zanè-era Laverda’s Achilles’ heel. It wasn’t a bad starting point, as it already had dual overhead-cams, four valves per cylinder, and a six-speed gearbox. For this more modern application, the air and oil-cooled parallel twin was punched out to 668cc and fitted with Weber-Marelli fuel injection for a claimed 70hp. 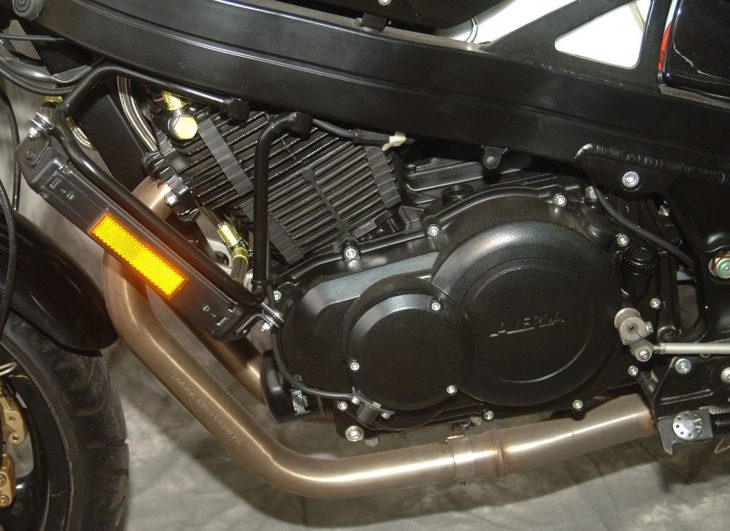 Viewed in isolation, the engine did a fine job: it was naturally compact, liked to rev, and made decent power. Unfortunately, it was up against the torquier, two-valve Pantah in the Monster and needed to be worked harder for the same result. The engine later gained a few cubes and liquid-cooling for the Sport models like the Formula, but that bike was pitched against the Ducati 748 and, while handling as as good or better, the Laverda’s 1970s roots were unfortunately showing by then. 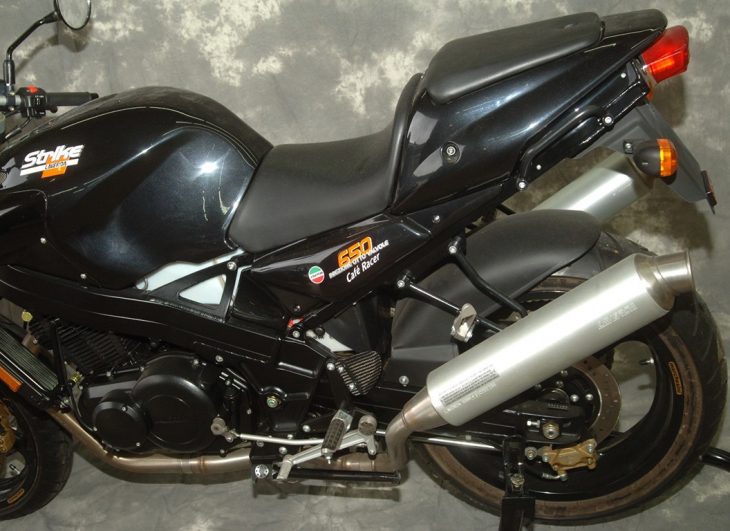 Overall, the Ghost’s styling is… distinctive. It’s not a pretty bike, but looks aggressive and purposeful, a worthy competitor to the Monster. However, while both are designed to provide an Italian bike experience for the proles, the Monster looks like its own thing, but the Ghost hasn’t aged quite as gracefully and doesn’t hide it’s parts-bin origins as well.

If you are looking at this auction, you probably know what this is. This is a Zane Laverda Black Strike Café Racer 650/668. This is an extremely rare motorcycle. Only 50 total were built and only a few made it to the United States. Of these, this one has only 1 true mile on the odometer.

The black strike edition was a kind of a one-off within the Zanè-era lineup and incorporated all the top shelf goodness of the Laverda marque at the time; a Nico Bakker designed frame, 3 sets of Brembo brake calipers, Marchesini wheels and a letterbox gas tank that reduces the center of gravity (which is still pretty advanced after 14 years). And the fact that you can still get a Zanè-era Laverda for reasonable money whereas a lot of Breganze-era bikes have begun to appreciate beyond the reach of us mere mortals is another plus.

The air-cooled 668 engine and Nico Bakker designed frame were from the 668 Sport model, while the seating and gauge clusters where from the the 668 Ghost.The 668 Black Strike was also the first model with the lighter plastic gas tank, straight exhausts without the restricted collector box and also offered a few bits of optional carbon fiber such as exhausts and optional front fender/mudguard.

The Black Strike model was produced in 1997/98 at the number of 50 units and since Laverda is now a mothballed marque within Aprilia Piaggio this is definitely a rare bike.

The story behind this bike supposedly is, that Laverda brought a handful of bikes to Laguna Seca in 1997 to have them tested and rideen by the press. After a couple bikes were crashed by journalists, Laverda pulled the remaining bikes, but instead of sending them back to Italy, they passed them on to selected dealers. This is one of these bikes.

Original owner. Bike purchased from Space Coast Cycle in Coco Beach. It was started by the dealership when bought and never started  again.

Other Zanè Laverdas for sale: 1999 Formula and 1998 Legend. Inquiries welcome.

Buyer to make arrangements for shipping/pick-up 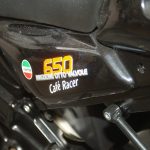 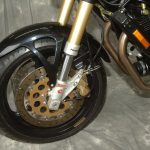 I’d never actually heard of the Black Strike Café Racer before seeing this, which makes sense since they only made 50 of them, according to the seller. A good Monster offers Italian looks, sound, and performance potential with much better parts availability, but the big appeal of any Zanè-era Laverda is rarity: I ran into a nice, yellow Ghost Strike here in SoCal and my riding buddies had absolutely never heard of the damn thing. All “murdered out,” this Black Strike does have a very sinister 90s vibe that I like and, if being different is your thing, you sure as hell won’t see another one at your next bike night. If anyone knows a good Laverda mechanic, feel free to share in the comments… 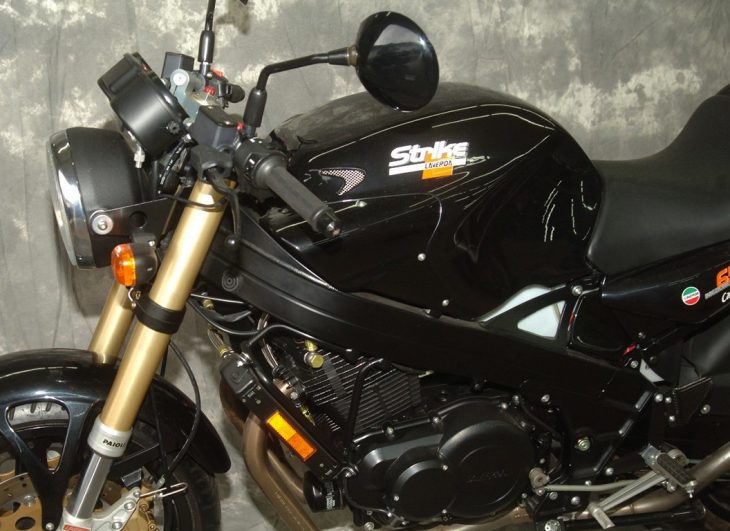