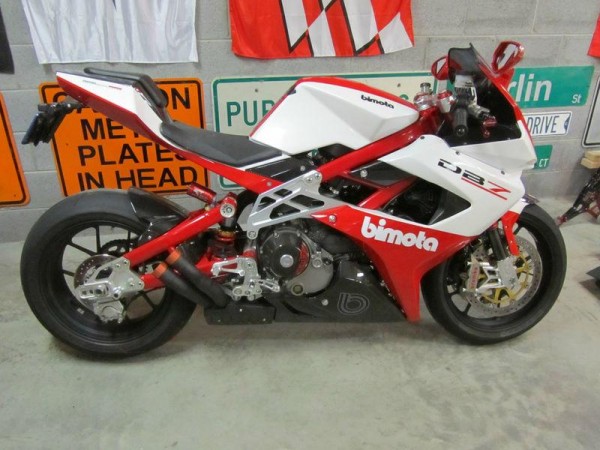 Another day, another piece of artwork from Rimini. This is what keeps me going in to work every day; if I couldn’t dream about owning all of the bikes on my bucket list (of which this is one), there would really be no point in getting out of bed in the morning. Since I am the type to quietly admire art, I will let the seller and his pictures do all of the talking. 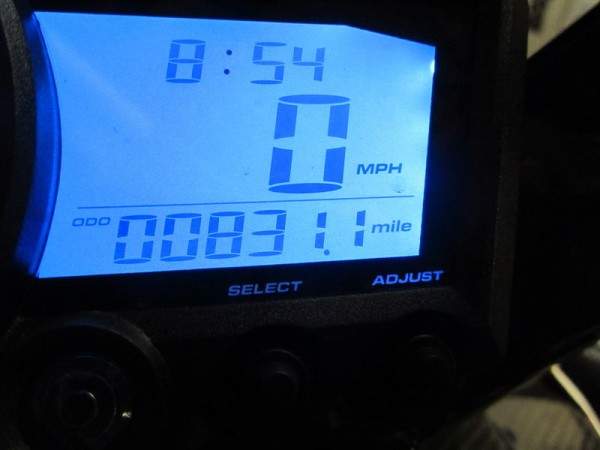 From the seller:
Sad to say, but I have decided to part with my DB7 so I can move on to the next toy. I have enjoyed the bike as well as preserved it. Of all the bikes I have owned (including a Desmosedici, 999R, 999S, 1198S Corse, MV Agusta F4, Aprilia RSV4 Factory, etc) this is by far the most refined amazing superbike of the bunch. Pick the best from the best, machine it and bolt it together by hand and, voila, you have the DB7. The handling is awe-inspiring! The linear power delivery is never abrupt and is always right where you want it allowing entering and exiting turns fast – a confidently controlled experience.

UNFORTUNATELY, the one thing it does not like is gravel in a friend’s driveway when you are trying to avoid being hit by a car!! This resulted in a low-speed low-side and scratching up the fairings with a whole 263 miles on the bike! Good thing they are carbon fiber as there was no structural damage. I did take this opportunity to change the color of the bike. The shade of red it was originally painted did not match the frame. I believe during the original conception of the bike, the frame and the fairings matched. Now the fairings are painted Ducati Red and Ducati Pearl White. The frame and fairings now match and greatly improve the looks of the bike. While I was getting the color combo fixed, I took this opportunity to change the timing belt cover to carbon fiber, added a billet red pressure plate, added a speedy moto water pump cover, installed a custom windscreen from Australia, modified and cleaned up the tag bracket and added CRG levers and better grips. I also had the exhaust black ceramic coated and installed red anodized tips.There is still some small defects in the clear of the fender and nose that I have included in the pictures of the bike. 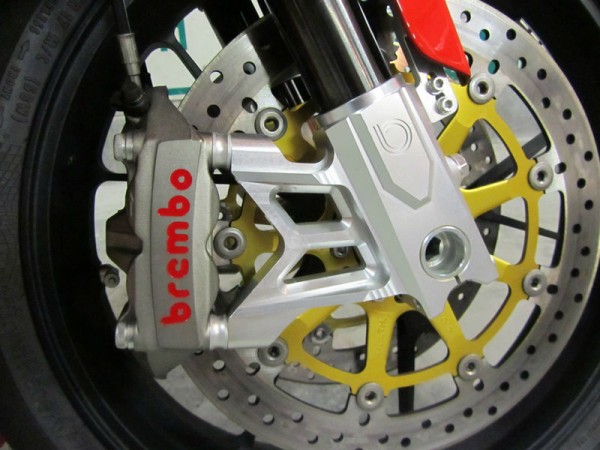 From the seller:
I have took some of the reviews and information available on the bike and put a nice piece together below:

Bimota is the sort of archetypal family-owned Italian company that puts out exclusive hand-built luxury machines. Think Lamborghini and Maserati in the car world and you’ll have an idea.

Nearly 10 years since we saw the debut of Bimota’s last liquid-cooled Superbike, the SB8R. (The abbreviation reads: Suzuki Bimota 8R (TL1000R) in the same way as DB7 is Ducati Bimota 7. The numbers stand for the number of models with a Suzuki or Ducati engine in the hand-built frames.) The latest chapter in Bimota development is the new DB7. Powered by the incredible Ducati 1098 Testastretta Evoluzione engine, the DB7 matches the performance of the Ducati Superbike engine with the innovative Bimota chassis concepts. Bimota technology and innovation has never been more beautiful.

Technical innovation, handcrafting and unrestricted component quality have always been the primary directive and soul of Bimota. Since the rebirth of Bimota in 2003, these priorities remain at core of the company’s philosophy and take form in the new generation models DB5, DB6 Delirio and incredible Tesi 3D. The objective in the development of Bimota DB7’s newest Superbike was to create a motorcycle that is light and powerful with superior road manners, while remaining distinctly Bimota in style and attitude. Furthermore, the new Bimota was to be as capable on the track as it is on the street. With so many Superbike manufacturers, there are also many advanced and extremely capable motorcycles. So for Bimota, simply being fast and race inspired is not enough, a Bimota must offer something more, much more.

Bimota is the only factory in the world allowed to place Ducati’s gem of a 1099cc V-Twin engine in its own chassis. Just to give you an idea of just how exclusive this motorcycle is, Bimota only plans to build 300 DB7s per year, which will be about 50% of the planned overall production in 2008. The eight-valve, 1099cc desmo twin is cut from Ducati’s 1098 and pasted into Bimota’s typically atypical steel-tube skeleton. Salient particulars for the 138-pound lump are the same as you’d find in a 1098S. The 104.0 x 64.7mm cylinders use 12.5: 1 compression to deliver an alleged 160 bhp at 9750 rpm, just under the 10,700-rpm rev ceiling. Elliptical bores in the Marelli throttle bodies flow 30 percent more than an equivalent round inlet shape, which accounts for five of those horses. Bimota have modified the big V-Twin with a different and more efficient side-mounted exhaust system and added a Walbro ECU. This has resulted in a claimed 30% boost in torque between 4-7000 rpm compared to the Ducati 1098. The extra torque in this area of the powerband allows a fantastic corner exit with a wide-open throttle.

The DB7 introduces a new hybrid oval tube trellis frame that utilizes lightweight machined plates in its design. The same engineering solution is used in the unique rear swingarm for a package that not only delivers rigidity and predictable handing, but also lends a harmonized technical look to the bike. The Testastretta Evoluzione twin works harder as a stressed chassis member than it does in Ducati’s 1098. Oval-section 50 x 30mm chromoly tubes form a more rigid lattice than round stock using the same 1.5mm wall thickness. The stiffer skeleton let Bimota shift the engine 12mm higher and 8mm farther vs. its location in a Ducati, shifting weight forward to enhance front tire grip. Side plates are milled from aircraft-spec, Italian Aticorodal 100 aluminum. The net result is 2.6 pounds lighter than Ducati’s 1098 frame.

Upper and lower fork crowns are billet machined and mount fully adjustable Marzocchi Corse forks with 43 mm sliders with DLC (diamond like coating) treatment for smooth and predictable reaction to the tarmac. Bimota uses a 43mm Marzocchi inverted fork, complete with low-friction nitride-coated sliders. Rake is set at 25 degrees, buffered by 3.9 inches of trail. Stout billet triple-clamps keep everything in line. Constructed from the same oval-section tubing as the rest of the chassis, the DB7’s swingarm cues a fully adjustable ExtremeTech 2v4 shock via a 7 percent rising-rate linkage. There’s 3/4-inch worth of ride-height adjustment in there as well.

The narrow fuel tank, with a capacity of 26 liters, has been sculpted to be extremely thin between the legs and matches perfectly the seat to maximize rider control and comfort. With a seat height of only 800mm, riders of all heights can enjoy the performance of the DB7.

Combine all of the DB7 innovations and you have a bike that weighs-in at an incredible class leading 170 kgs. The DB7 bristles with fine CNC machined details including the rear frame plates, engine mounts foot rests, rear swingarm sections, chain adjuster plates and both clutch and front brake levers. The new DB7 charms the heart by combining characteristic Bimota style cues with uncompromised attention to details and unparalleled fit and finish. 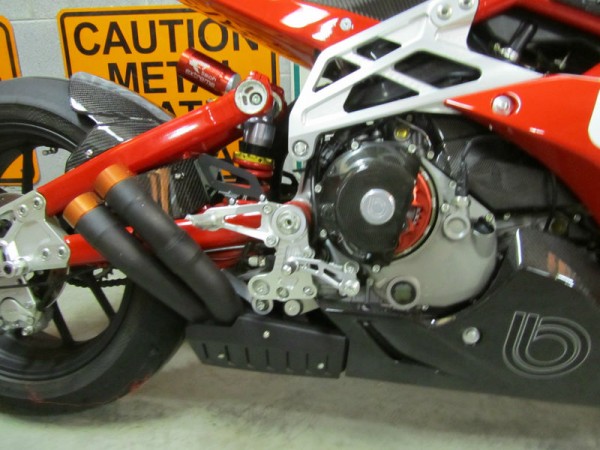 There is also a video walkaround of this particular bike:

How about a few more pictures: 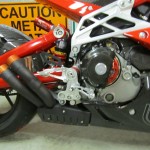 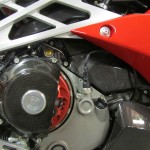 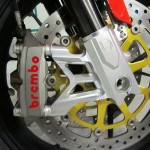 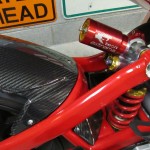 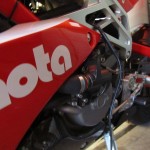 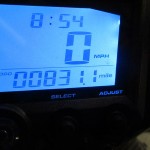 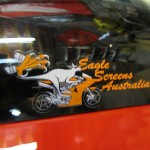 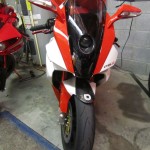 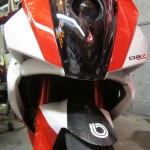 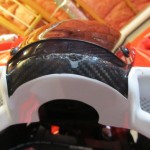 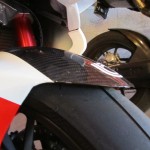 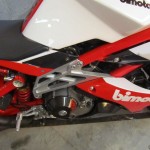 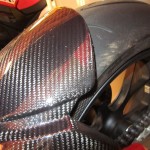 The good news here is that you have an honest seller who is willing to point out the warts on his baby. For so few miles this bike has seen a bit of action. I’m also not sure I’m in love with the exhaust treatment, but then again the HUGE titanium can on the stocker is not exactly subtle. But with that willing desmoquattro motor and the sublime handling of that artful Bimota chassis, who wouldn’t be just a little bit tempted?

The BIN for this piece of sculpture is a cool $26,000. The seller is willing to entertain offers, however, so there might still be a gorgeous DB7 in somebody’s future. History shows past DB7s to all live above the $23k asking price ceiling, so while $26k might be a bit high for a bike with known damage history, it is certainly not absurd. Anyone score large wads of Christmas cash? For more information and pictures, click the link and jump over to the auction. Good luck!