Probably looking better than when it first arrived in the U.S., today’s Goose was recently the subject of an all-pro restoration and has turned just a few miles since.  The classic cafe racer could be put right into service and veritably sings about Mandello del Lario’s glory days. 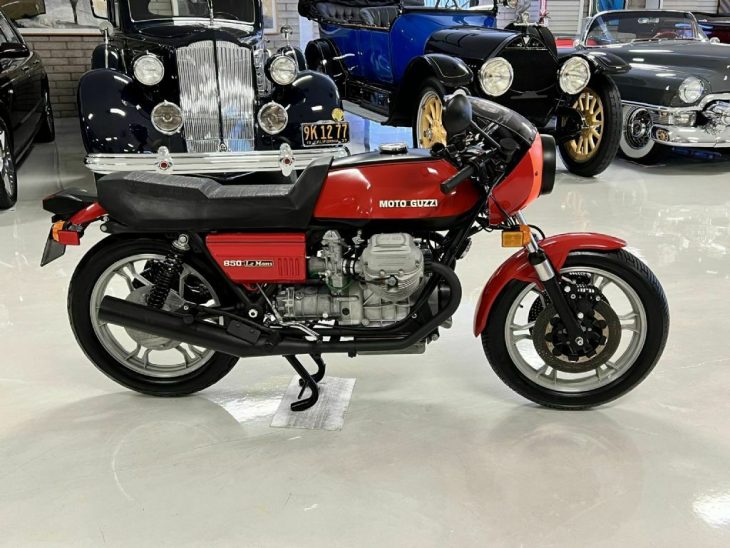 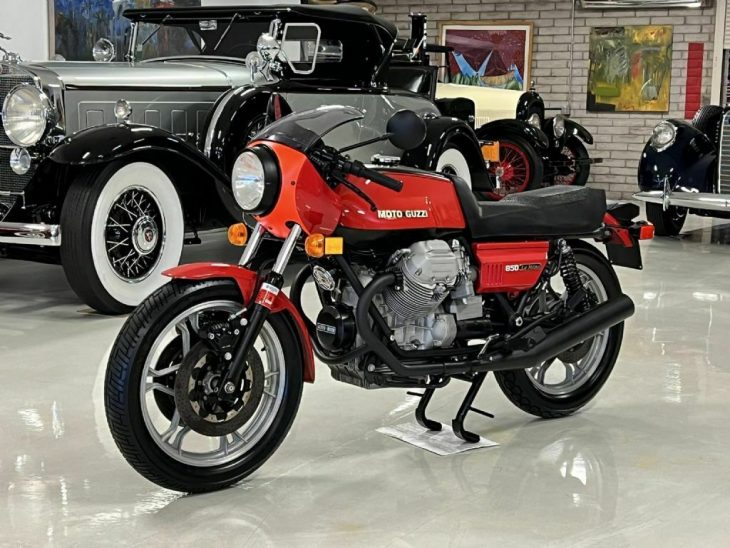 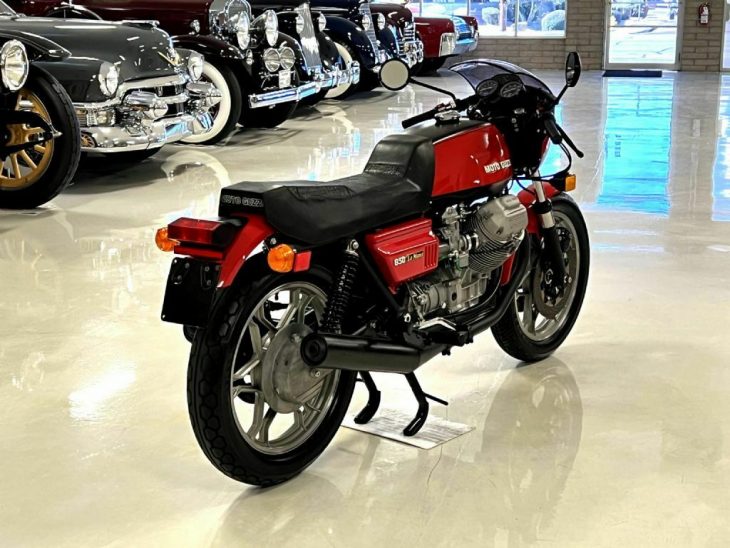 The Le Mans was based on the V7 engine, with a significant displacement and power bump to 80 hp.  Fairly standard Guzzi backbone and downtube frame, with incremental improvements to the forks and dampers.  The upturned V-twin makes for a slim package and reviewed as a smoothie despite some noise from the pushrods and valve train.  Brakes had a then-new linked system, where the right pedal put some braking force into the left front disk, which along with the shaft drive, has become a Guzzi paradigm.  Later Mk.1’s ( sometimes referred to as Series 2 ) had some Ital Design details, like the angular seat and taillight.  High marks were given to the dash and switchgear, and the front quarter view was almost as popular as Cheryl Tiegs. 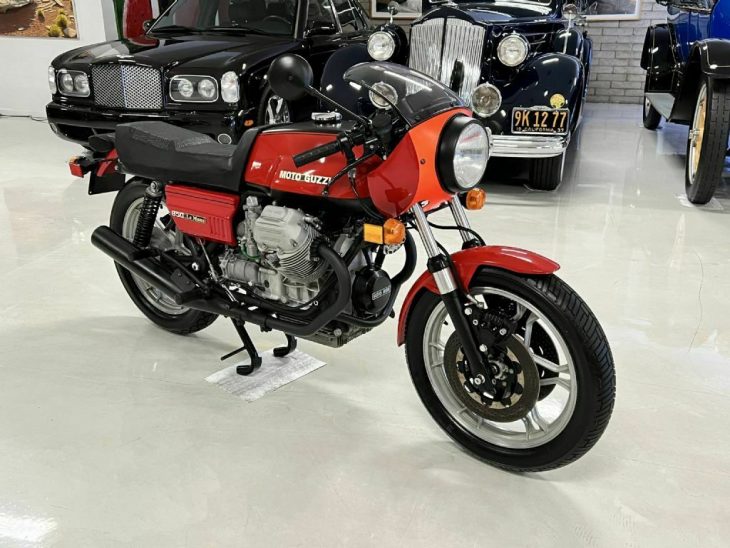 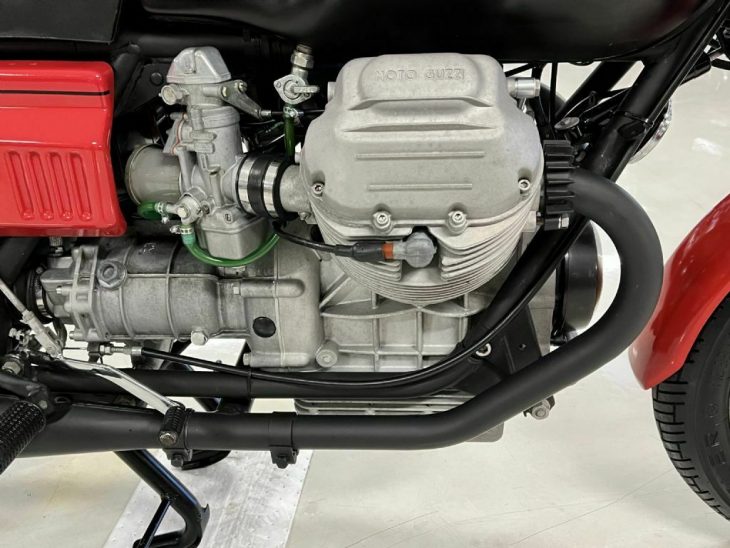 Consigned by a Phoenix classic car dealer, this might be one of the best Le mans restorations out there.  While you can poke around long enough to find a bit of patina on a painted part, the colored bits are great and bare metals look like they were just pried away from the vapor blaster.  Might quibble over the semi-gloss frame paint with the stated restorer, DB Cycles up in the Finger Lakes, who appears to still be in business.  The seller is in debt to Bonhams for most of the notes in the eBay auction :

LM1 that is in nearly showroom new condition today. The Le Mans editions were highly coveted when new and are incredibly rare today. Described by Bike magazine as the ‘sleekest, horniest thing you’ve ever seen on two wheels’, the sensational Le Mans delivered 130-plus MPH performance. It worked well on the racetrack too, with the Le Mans-mounted Roy Armstrong emerging as the overall winner in the 1977 Avon Production Championship. The LM1 was essentially Moto Guzzi’s first attempt at making a cafe racer. Bill Haylock of Bike magazine wrote a glowing review of Moto Guzzi’s Le Mans in the August 1976 issue of the magazine: ‘The Le Mans just looks so goddam beautiful that if I was rich enough I’d buy two of them – one to ride and one just to stand in the living room to admire as an object d’art. It represents the ultimate in motorcycle styling as an art form – the synthesis between engineering and aesthetics in which the Italians are supreme.’  We love the alloy wheels, shaft drive and semi-gloss black exhausts as well as the funky 70’s embossed seating, all correct and exactly as they were sold when new. This example even has the correct LM1 orange safety stripe on the fairing. This particular LM1 was restored in January, 2016 and then decommissioned to be added to a substantial collection of Porsche motorcars and vintage bikes. The LM1 is showing 14,705 miles on the odometer but has just a handful of miles since its complete restoration.  The heart of the LM1 is the 90 degree V twin that is still a hallmark of the bikes produced in Mandello del Lario.  The dual front cross-drilled rotors help ensure adequate stopping power. 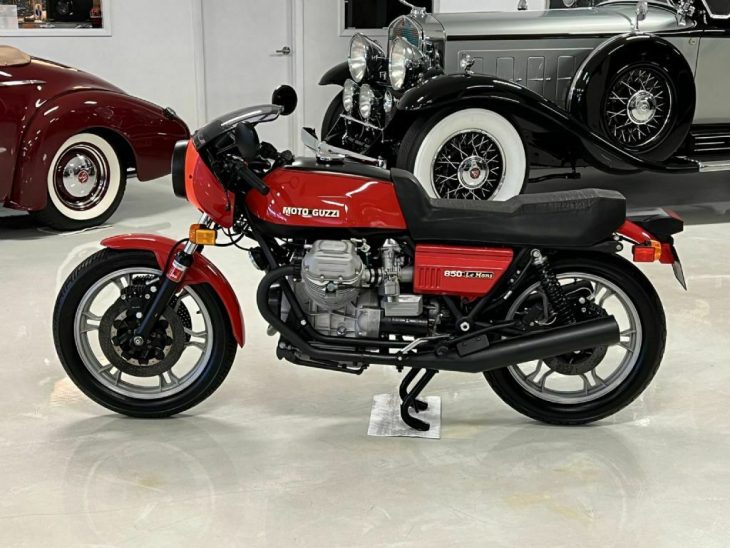 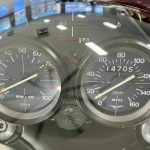 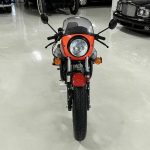 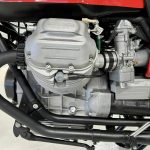 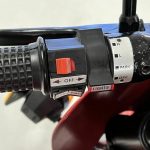 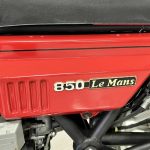 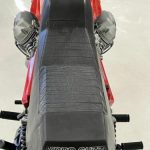 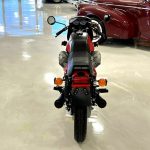 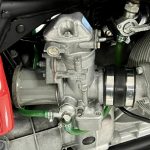 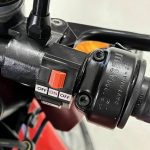 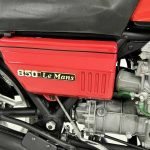 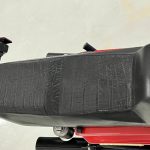 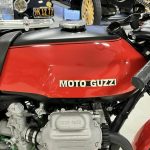 Hard to believe this 850 Le Mans is just shy of 45 years old, but time stops for no bike.  Moto Guzzi has weathered multiple owners and seems poised to continue under the Piaggio umbrella.  A fair chunk of change for an air cooled twin, but now a classic and that condition will never go out of style. 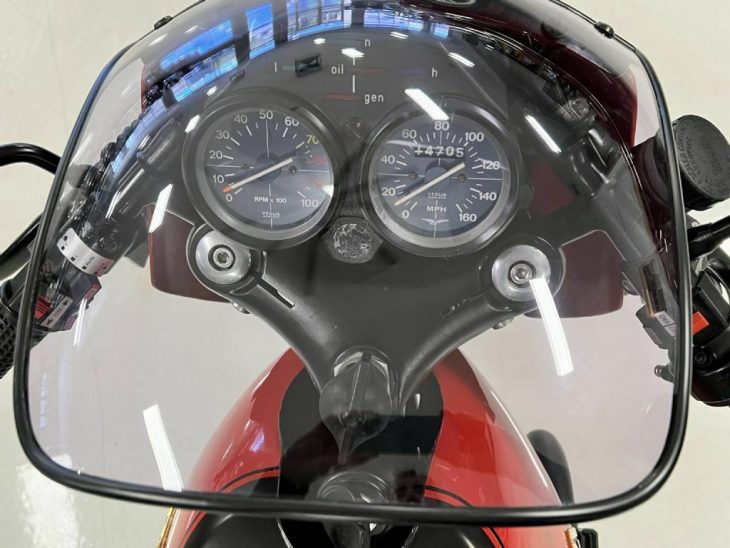