Aprilia’s RSV1000R was built from 2004-10 though its roots go further back to 1998 and the RSV Mille superbike.  The 998cc magnesium-cased twin has gear-driven cams and has proved a reliable mill, this vintage producing 139 hp and 79 ft.-lbs. torque.  The race-only bike presented here was campaigned in ’09 by Chaz Davies in the AMA Daytona Sportbike series, and has some neat “factory” and race-developed details. 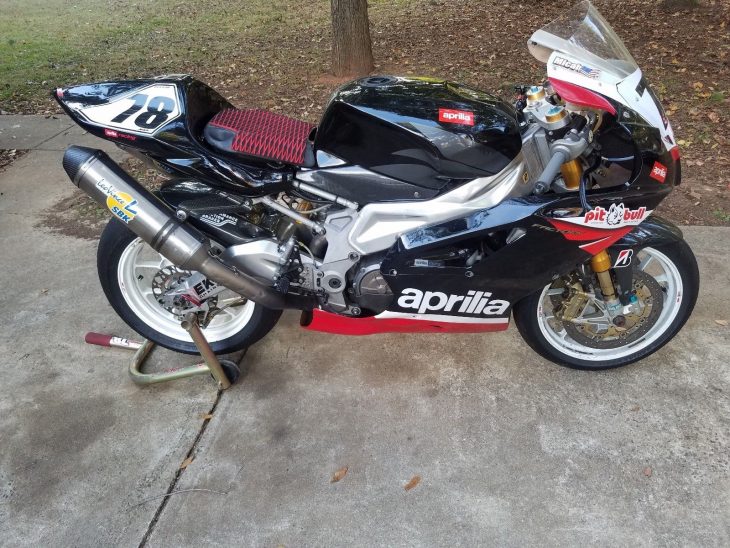 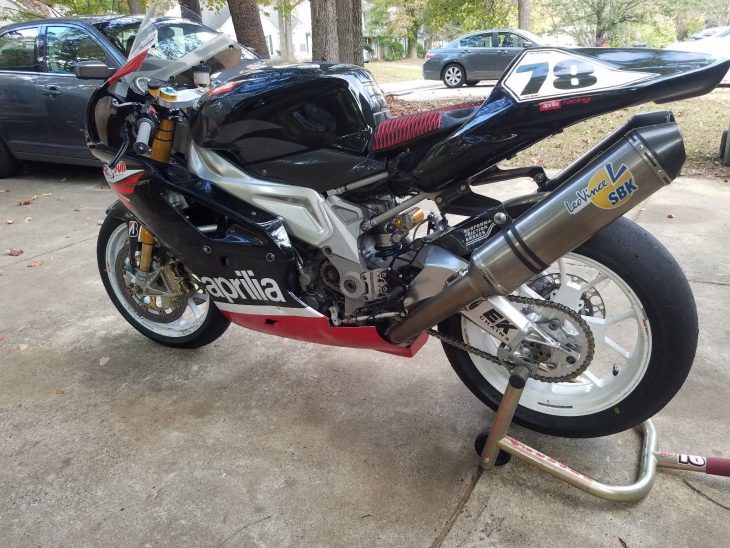 Dollar intensive upgrades like Öhlins dampers for front, rear, and steering, and O-Z forged aluminum wheels set the Factory version apart, along with several carbon fiber details.  An Akrapovic exhaust was an option, but this RSV has a Leo Vince system.  Aprilia literature shows the Factory having gold anodized frame and wheels, but clear anodized frame and white wheels are on this bike.  Brakes are a strong point with Brembo’s radially mounted calipers and braided lines. Never anything but an AMA Pro racebike, this RSV1000R seems like it was spared any high sides, and shows a lot of carbon fiber, safety wire, and billet parts.  At least for this bike, Aprilia’s choice of “Factory” as a sub-model has clouded the factory race bike issue.  Very clean overall, though a pro race bike is out there every week and some wear and tear is expected.  The list from the eBay auction: 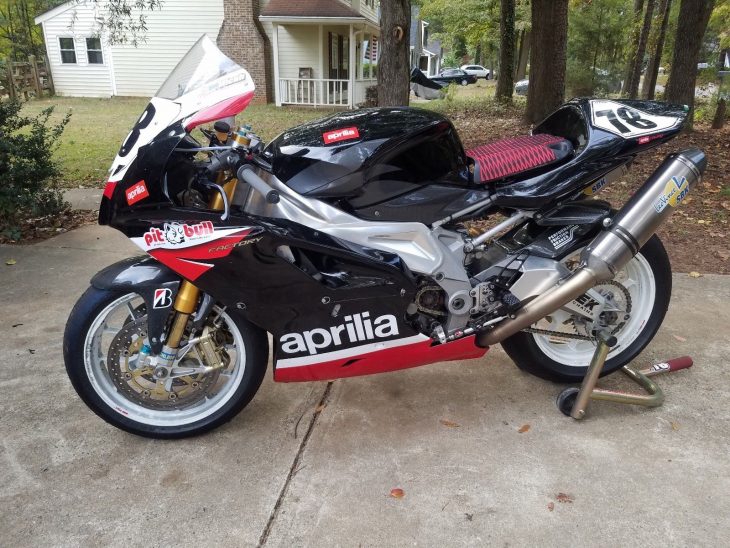 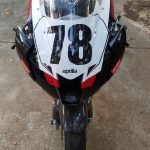 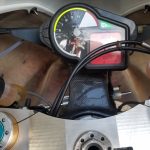 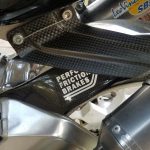 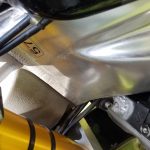 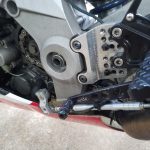 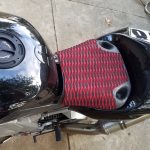 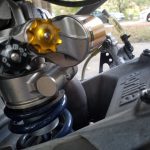 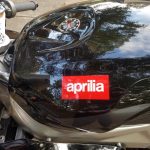 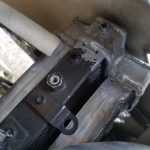 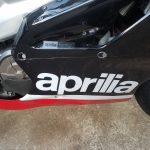 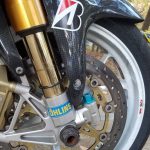 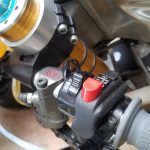 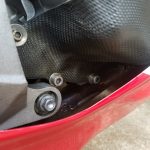 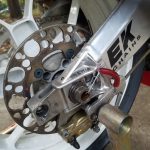 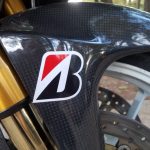 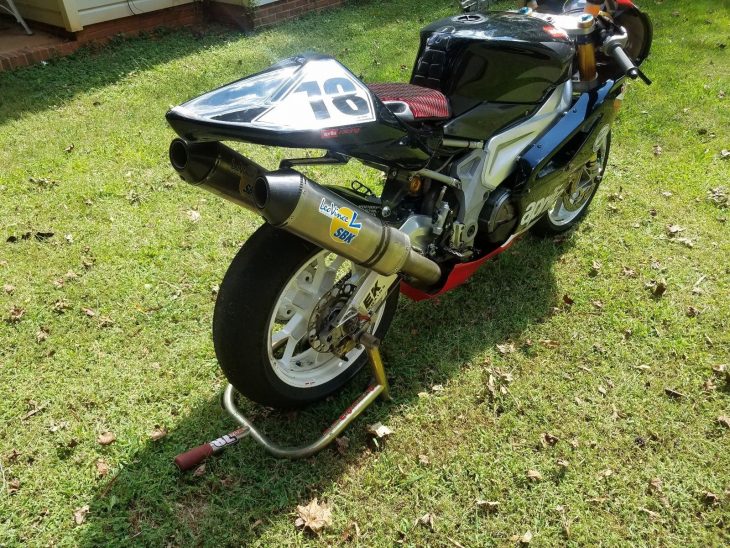 In the mid-2000’s Chaz Davies was a regular on the AMA circuit, rode for the factory-supported Aprilia team in 2009, which led to a factory Triumph World SuperSport ride and the championship for Yamaha in 2011.  Since 2014 he has ridden a Ducati for the Aruba.it team in WSBK, and has been a regular on the podium.  The 2008 edition is toward the end of the run for the RSV, as development of the V-4 was underway, and has all the best of the big Italian superbike.  A club-racing program is just a pleasant daydream for most of us, but this late Aprilia would be a nice choice for an expert rider… 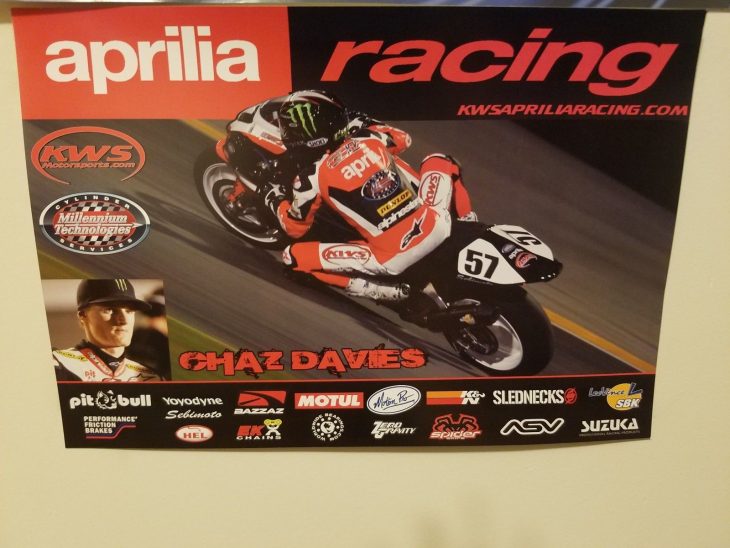 That’s right, you can own the same Factory supported RSV1000R’s that Chaz Davies and Aaron Gobert used in the 2009 AMA season. All three have been gone through with fresh motors and suspension by KWS, and are ready for the track. Make no mistake these are factory race bikes with all the trick components that are not always available to the general public. Some of those components are KWS Super Bike spec motors cranking out 140hp, Millennium Technologies adjustable triple clamps, top of the line Ohlins forks and shocks, Millennium Technologies quick change brake hanger (just in case you need to change your rear tire in 13 seconds), 5.5″ rear wheel, a nice sprinkling of exotic Brembo brake components, Kevlar fuel cell, and some really trick Millennium Technologies rear sets.

The 2010 season is drawing near and I can only imagine Chip would love to move these to a good home. The price is $14,985.00 per bike. If you consider the 2010 RSV4R’s have a retail of $15,999.00 and $20,999.00 for the RSV4 R Factory, KWS is practically giving them away. Imagine showing up at your local track day on a Factory Aprilia racer and blowing past your buddy on his 1098 or pulling the trigger on one of these in a regional Heavyweight Twins race. They wouldn’t know what hit them!

You know the one thing I haven’t mentioned is the super cool paint scheme on these bikes. Can a race bike look any better than these?

Heck, if racing isn’t your thing you can poke around on ebay, buy some stock parts and put it on the street as a sleeper.

There are more pictures available on the KWS Motorsports site and I would recommend checking them out. They are pure eye candy! 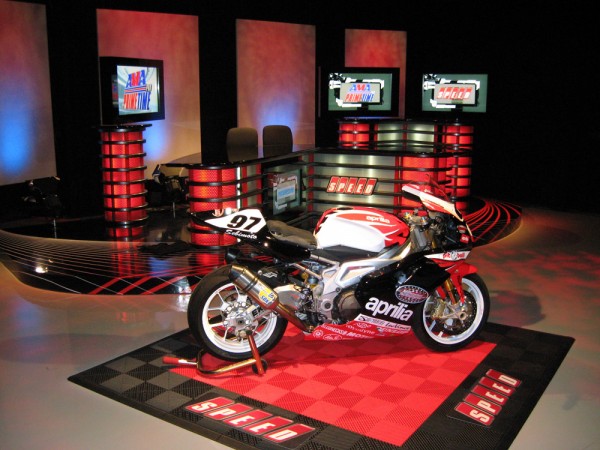 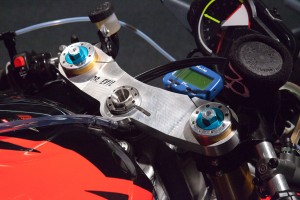 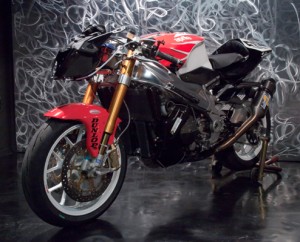 If you’ve got an extra 10 minutes to spare check out this video. You can listen to the guys at KWS talk about developing the RSV 4R into a competitive racer. You can also listen the sweet, sweet music the Leo Vince exhaust makes.

We all know that Doug has a soft spot for homologation specials.  Well, mine is for race bikes like this one:  one of four (or are they selling all four?!) 2009 AMA Pro Daytona Factory Aprila RSV1000R race bike for sale by KWS Motorsports: 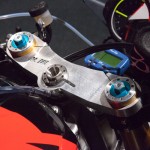 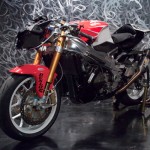 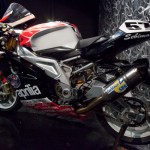 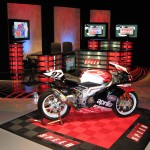 Here’s a partial list of the (very tasty) specs:

KWS Motorsports is asking $17,985 for the bike.  A lot of cash?  Normally yes, but for a race bike with some pretty decent finishes and race history?  Heck no!