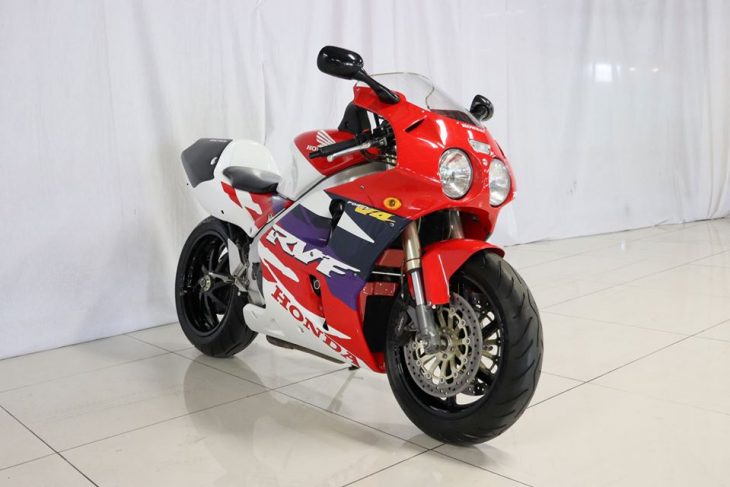 Certainly one of the most sought-after bikes of the 1990s, today’s Featured Listing RVF750R RC45 was the follow up to Honda’s extremely successful VFR750R or RC30. Ultimately, the RC45 didn’t have the same success in racing as their earlier RC30, but it wasn’t for lack of effort. The RC45 was every bit as polished and exotic, and used the same basic formula as the RC30: light and stiff aluminum beam frame, V4 with gear-driven cams, and a single-sided swingarm. The RC45 was powered by a 749cc, 90° V4 with gear-driven cams and the “big bang” firing order that gave the Honda V4s their characteristic sound and improved traction coming out of corners. The cam gears were moved from the center of the engine as is typically seen in motorcycles, including the RC30, to the side of the engine to improve packaging, while sophisticated PGM-FI fuel injection replaced carburetors. Total displacement of the new V4 was almost identical to the earlier bike to squeeze under the limit for to meet World Superbike regulations, but the bore/stroke were changed significantly from 70 x 48.6mm to 72 x 46mm, making the engine more oversquare to reduce piston speed and increase revs. Titanium connecting rods helped reduce reciprocating mass and magnesium castings kept the overall weight of the engine down, while a slipper clutch helped keep the rear tire from locking up during downshifts. 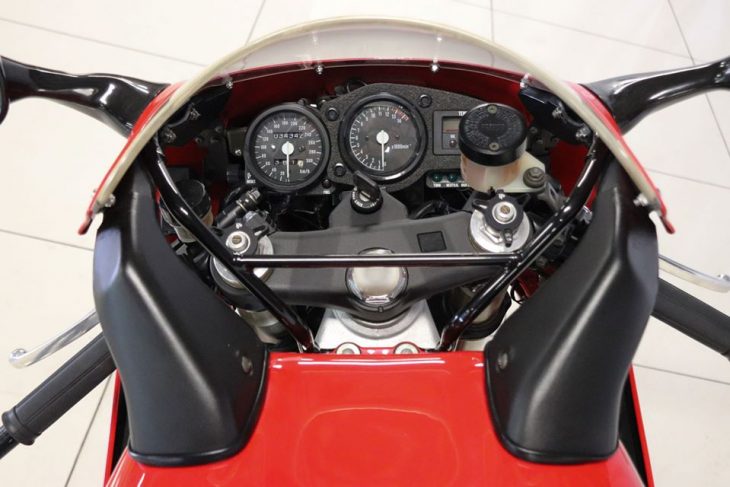 Showa adjustable suspension components at both ends of the aluminum beam frame kept the odd-size 16″ front wheel and 17″ rear wheel in contact with the ground, with the rear hoop mounted to a distinctive, ELF-developed single-sided swingarm that helped ease wheel changes during endurance racing events. So why didn’t the RC45 match the RC30’s success, particularly in WSBK? Well, the RC30 was incredibly innovative when it was introduced, so perhaps the competition from the other manufacturers had just caught up to Honda. I’ve also heard rumor that the new engine was incredibly difficult for privateers to tune. Regardless, it was still an amazing piece of engineering from Honda, and one of the most desirable superbikes of the era. This is the very first RC45 model to be brought into South Africa (one of only 3), it was imported brand new. I bought it from a collector and since then have fitted new tyres, chain, battery and had all the fluids replaced. She rides beautifully and sounds eargasmic, note that this is the full power model as noted by the ED demarcation on the PGM-Fi. 34,000km (21,250 miles). All bodywork and the screen is OEM Honda, and the only aftermarket bits are the Yoshi exhaust, and the indicator deletion. (Which are readily available from Honda, and can be arranged). No rust or oxidation due to our favourable, dry climate, and careful storage by myself and the previous owner. Tool kit and paddock stand will be included in the sale.

A rare opportunity to own, ride and enjoy the ultimate 90s superbike. A reasonable asking price of $35,000 includes free shipping and crating to any location, worldwide. Please contact Justin via email justin@redladder.co.za 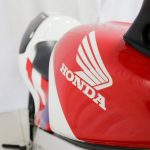 Just 200 were made worldwide, making this a very rare machine. The mileage isn’t barn-find-low, but Hondas are built to last and this still appears to be a very sharp machine. Keep in mind that these are incredibly rare, finding the parts and an experienced specialist to refresh your 0-mile RC45 could be a real headache. This one looks ready to ride and enjoy! 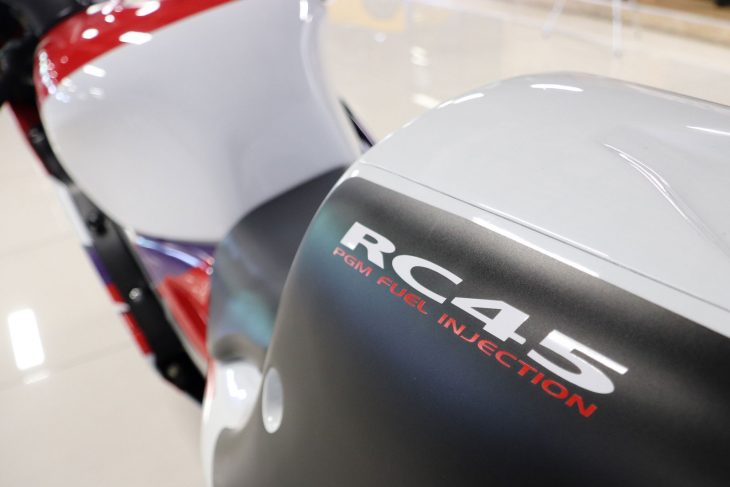