After Carl Fogarty retired his 916 racer with 4 Superbike World Championships, the Ducati factory released a 2002-only Monster S4 commemorative edition which are quite rare with total production of only 300 and highly regarded as the first water-cooled 4-valve Monster. 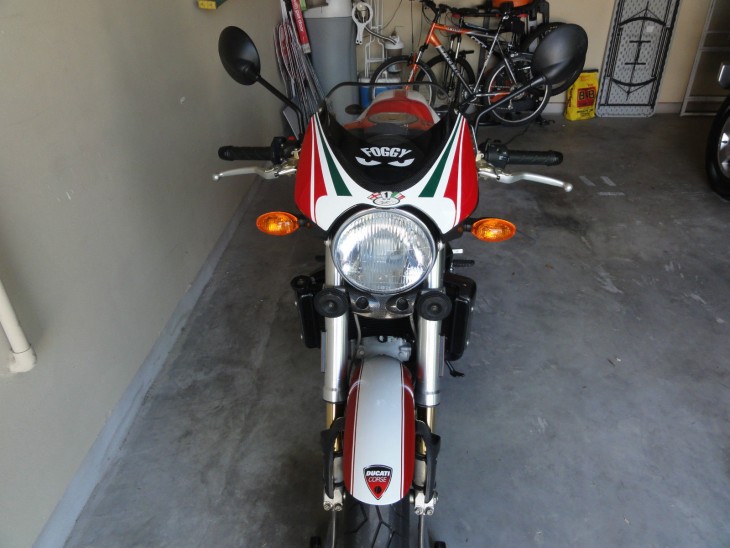 With 101 hp and just a bikini fairing, the S4 is study in contrasts, the short Monster wheelbase but the booming 916 cc engine.  Developed on an ST4 frame, it’s a monoposto but with a relaxed seating position, the bars mounted to the tops of the triple clamp.  A neat carbon chin scoop under the horizontal cylinder, but not much cover for the water pump and radiator.  Running gear is more standard early 2000’s Ducati, 6-speed straight cut gearbox, dry clutch, nice 320mm front disks and 245mm rear.  Almost all the external accessories are carbon, headlight fairing, cam belt covers, side covers, and various guards – even the Termignoni’s  – help keep the weight around 400 lbs. Number 19 0f 300 with just break-in miles, this 13 year-old machine appears super nice.  Only two owners to date, and the sale includes front and rear pit stands, and factory cover.  Red and black keys shown ( plus spare key ), so no immobilizer issues.  From the eBay auction:

#19 of 300. 1 of 300 worldwide and 1 of 75 imported into the U.S. This is 916cc 4-valve water-cooled engine mounted to an ST frame to handle the increased power. 110hp/66 ft lbs torque. 2100 miles since new and in near-mint condition with very minor imperfections as one would expect for a Quality motorcycle. This motorcycle wants for absolutely nothing and is 100% ready to ride..Fresh oil and service 6/23/15. It comes with front and rear stands and the red cover and all three Keys. I am the second owner of motorcycle.

It’s mid-summer and likely too hot for much sport biking, but this would be just the ride across town for an ice cream or down to the beach, while celebrating one of Ducati’s great champions…