Built since 1994 and still in Triumph’s line-up, the Speed Triple is into its third decade of success and this 13 year-old offering looks like it might’ve rolled out of the showroom last week.  An edition with better engine, frame, bodywork, and nicely customized, this Speed Triple has understated good looks and seems ready for a lot more fun. 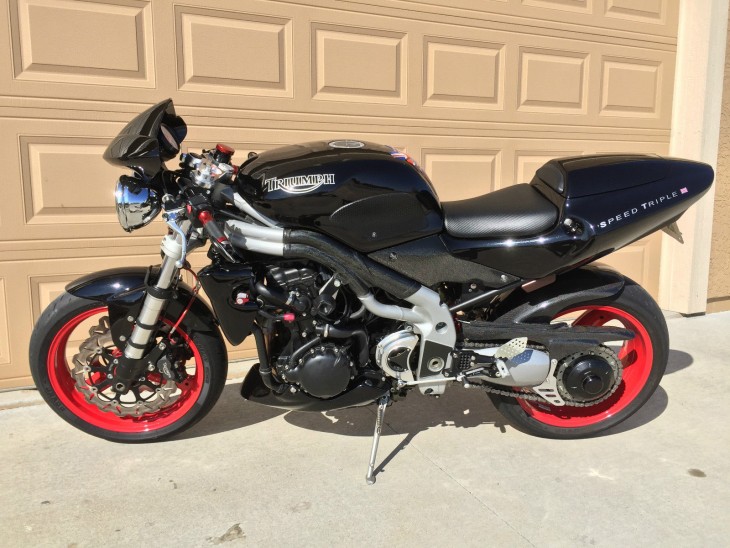 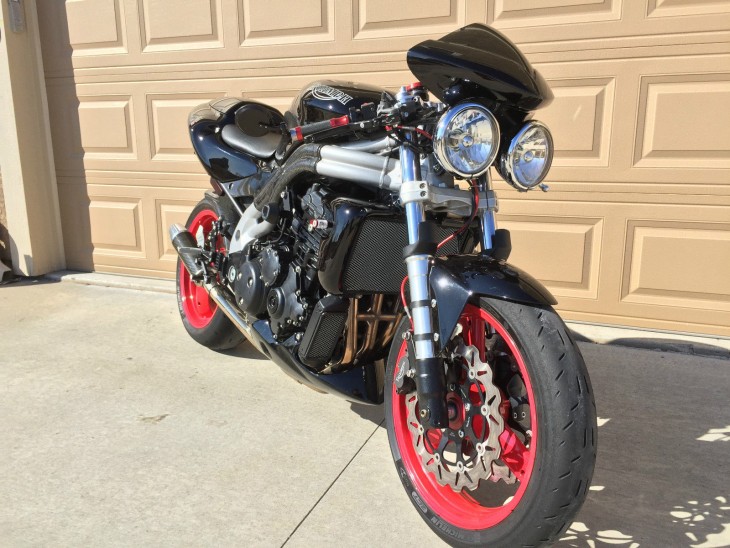 Using the 955 cc fuel-injected engine from the Daytona 955i, the Speed Triple has 120 hp available.  Sporting the double-tube aluminum perimeter frame but new bodywork designed by Gareth Davies, with separate handlebar, engine, and seat fairings.  45mm forks from Showa are adjustable, as is the rear monoshock.  4-piston front calipers grip 320mm disks, with 220mm rear.  3-spoke alloy wheels are lighter than previous years. 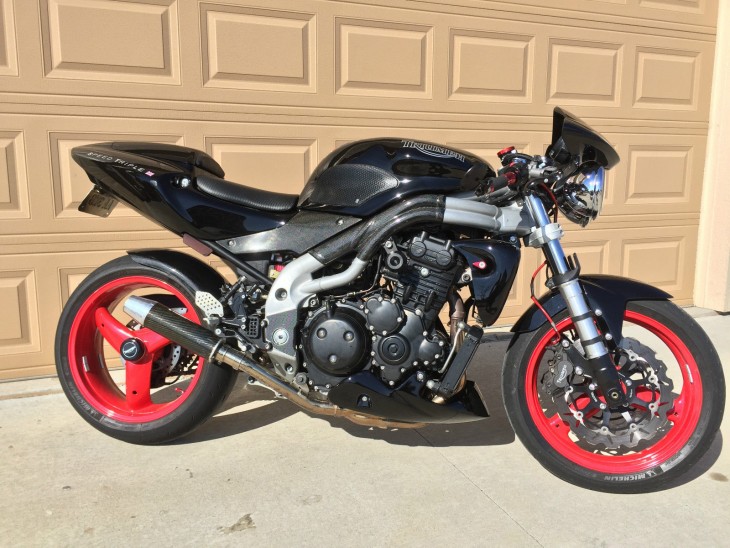 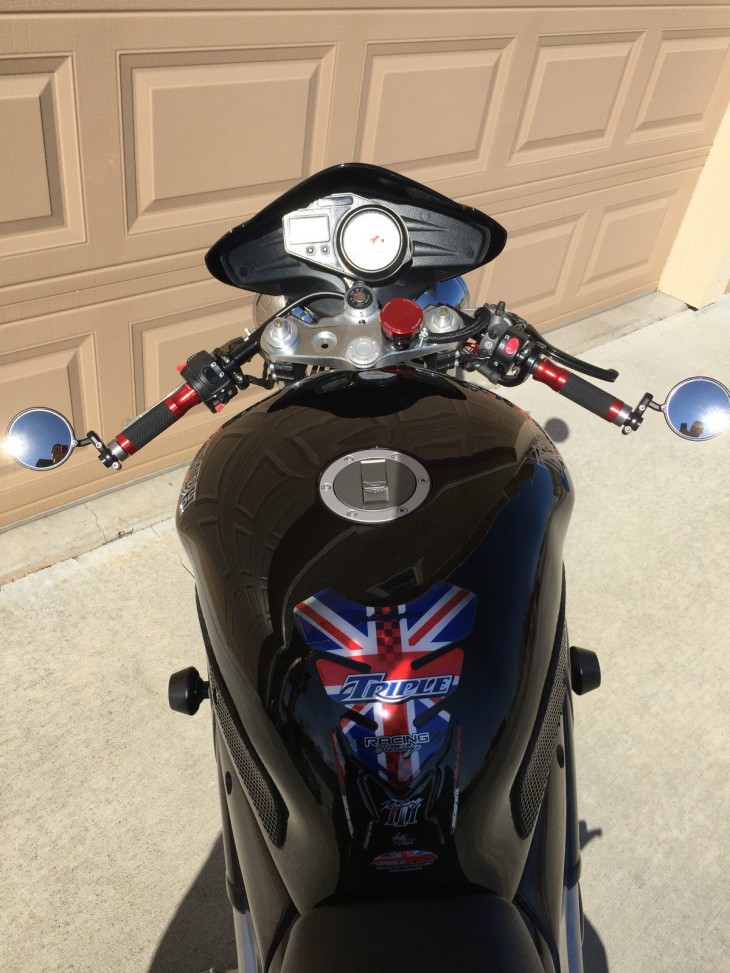 Nothing looks better than black, at least for the first few miles, and this Speed Triple is in super shape for 20,000 miles.  Not much on this bike has escaped update or improvement – from clip-ons to rearsets, and tuned forks to carbon hugger, it’s just about a show bike.  Too much to list, but the eBay auction states:

Two-owner bike, I purchased it in 2008 from the original owner in Arizona and I have a clean title in hand. It has just under 20k miles. I bought the bike basically bone-stock and invested a significant amount of time and money to turn it into this one-of-a-kind head turner. I’ve removed the handlebar and added clip-ons, as well as changing to a Rizoma rear set, which improves the riding position to be similar to a true sport bike. It’s been custom dealer-tuned by Struthers Bros. in Des Moines to best match the upgrades made to the bike. It has an awesome pop and burble when rolling off the throttle. This bike has class and attitude and gets respect from both the sport bike and the cruiser guys. Exceptionally low miles for this model year and mechanically and cosmetically near perfect.   There are no leaks, squeaks or rattles. Always garage-kept and covered.  Never ridden in the rain. 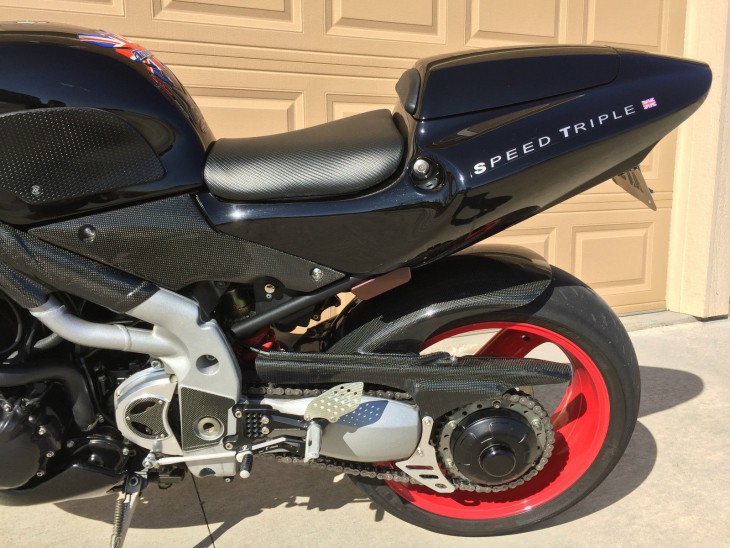 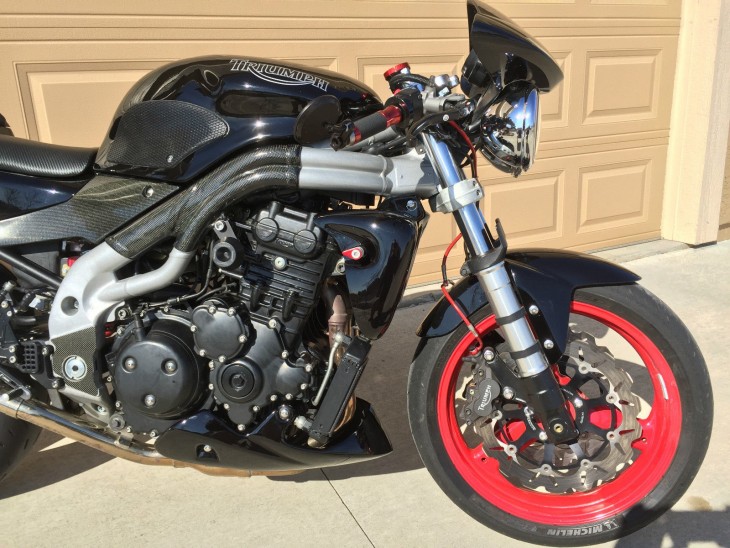 The lack of bodywork that makes it so easy around town collects its due when speeds rise, as rider comfort and stability at speed were not part of the specs.  But for the cafe or the boulevard, this is the fun machine.  The owner of this bike has been all over it, replacing plastic with carbon, chrome with stainless, even updating the headlight lenses.  Not just a cosmetic exercise, the engine has been tuned to the exhaust, suspension tuned, bearings and brakes improved.   A surprising list of included spares and maintenance supplies complete the picture and make this Speed Triple worth a second or third look, maybe after you park it at the show… 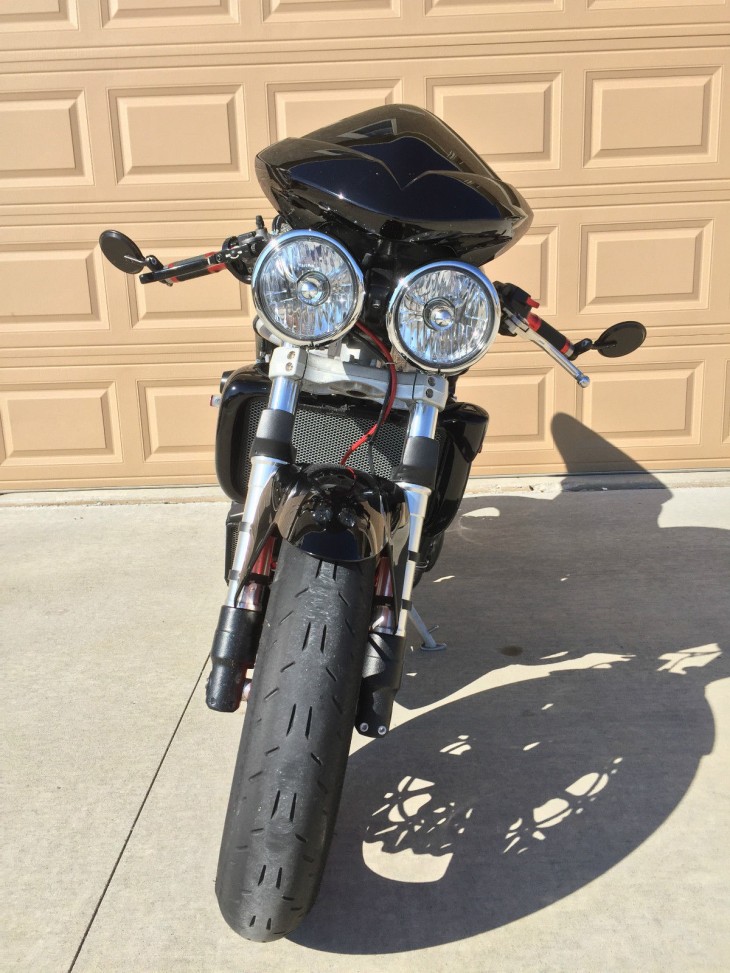