Back to our regular Italian program – a truly rare 1982 Bimota SB3 with history!!

Having answered some of our readers’ request for fewer Italian bikes (well, Ducati specifically), I posted a Honda RVF750R RC45 race bike and a Honda NR750 that generated some interesting comments.  However, I am still an eye-talian bike kinda guy and so before long I find myself Googling “Bimota” and this is what I found: 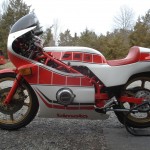 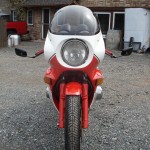 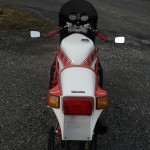 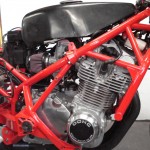 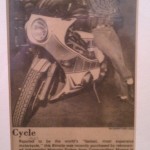 The motorcycle has been in a private collection since new. The bike is almost 30 years old and in beautiful condition, as it should for remaining in a climate controlled environment for its entire life. This is an exclusive and gorgeous exotic thoroughbred. Its craftsmanship and design will grace any collection. The motorcycle was purchased by Malcolm Forbes new, and is being sold from the Forbes collection. It has been maintained meticulously, even being taken back to Italy for a complete renovation at the Bimota factory. Mr. Forbes had a specially equipped 727 for carrying motorcycles; he transported motorcycles all over the world regularly. Here is an article that came out when he bought the Bimota [see photo above].

Look closely at the technology and engineering of this machine. The SB3 showcase’s some radical thinking; particularly in the frame design. The chromoly frame is assembled around the engine and uses aircraft style conical joints to connect the front and rear halves. It also has a perimeter swing arm, which pivots exactly at the transmission sprocket axis, eliminating the need for chain slack. Its modular bodywork and top of the line Italian components made it one of the most, if not the most expensive motorcycle you could buy in 1982. The engine, a Suzuki GS-1000, has been increased in power by adapting a 4 into 1 type exhaust system. Its standard suction chamber [I think he meant the air box – ph] has been replaced with 4 K&N filters on the carburetor horns. Only 402 were made during its production; this bike being a late production model (number 390).

Included in the auction are all of the service records, receipts and paperwork. This Bimota has been ridden regularly over the years; there are not any issues because of the bike sitting for an extended period of time.

The SB3 (like the very collectible SB2) has a modular steel tubular frame joined together by conical joints (you can see this in one of the photos above of the right hand side of the frame) – a very unique and innovative feature even by today’s standards.  It weighted 20kgs less than it’s donor bike (the Suzuki GS1000) and was 20 km/h faster – it even set a time of 1’02″40 at the Monza circuit where 55″ was the record for GP bikes at that time.

There were only 402 SB3s produced in total, with most of them being in a silver grey with paint stripe paint scheme.  Only 9 were offered in white with red speed blocks which makes this one even more rare. Now Suzuki engined Bimotas aren’t particularly collectible (with the exception of the SB2), but with its unique frame structure, colour scheme, combined with the interesting ownership history, I bet this SB3 will be sold for good money when the auction ends.