Air or Water? 2 Zane-era Laverdas in the UK, same seller

The zane-era laverda bikes tick a lot of the Rare Sport Bike boxes; limited production numbers, discontinued marque, italian heritage, smexy looks in an age where eye-bleeding graphics packages were the norm, etc.  The final generation Zane bikes were even recently ranked as one of  the top 5 “future classics” by Bonhams.

Personally I am a huge fan of these bikes; I love their handling due to the Nico Baker frame and top shelf components.  Also the letterbox gas tank  that reduces the center of gravity is still pretty advanced after 14 years.  The only real knocks against the zane-era bikes is 1) owners of the bikes made when the factory was located in breganze don’t consider them “real” laverdas (which is just stupid imho), 2) a lot of people haven’t heard of the brand/marque, and 3) some claim that the air cooled 668 was underpowered and the 750 series was unreliable.  NOTE:  I have found that people who claim this seem to turn out to be the aforementioned breganze-era owners.

As a collector I have had a good opportunity to experience these bikes directly and let set the record straight; the 668 series more than holds it own compared to comparable bikes of the time and looks a hell of a lot better.  As for the 750 series, it is true the 1st run of the 750s had some charging issues and a reputation for blown cranks at high rpms after 25k miles but both of these issues were resolved by the time the final generation was issued in 1999 as the 2000 models.   Sadly, at this point the company fell apart as the relationship between Francisco Tognon and other major investors deteriorated.  The brand was bought by Aprilia which then went bankrupt itself a few years later and both were then bought by Italian scooter maker Piaggio and so far there has been no indication of a revival of Laverda anytime in the near future.

This particular post is for two auctions of zane-era bikes.  While normally these would be two separate posts, they are being combined because both are being offered by the same seller! The first is for a 668/air cooled sport that looks very pristine.  Just look at the area near the footpegs/exhausts/chain…looks brand new!   The seller doesn’t include enough pics in my opinion but from what I am seeing the bike looks to be in simply stunning condition, perfectly clean and has approx 10,000 k on it so its barely broken it.

The 668 sport was probably the most advanced model in the 668/air-cooled range and owners report almost no issues with them other than the occasionally flat battery (which can be resolved by upgrading the battery cables).  I know some people who are fans of the early generation air cooled GSX-R models that tried a 668 sport and was just blown away by how they handled, sounded and looked. This bike has essentially the same styling as the 750 sport/formula so if you like the 750 series but are still concerned about reliability, this would be an excellent choice. 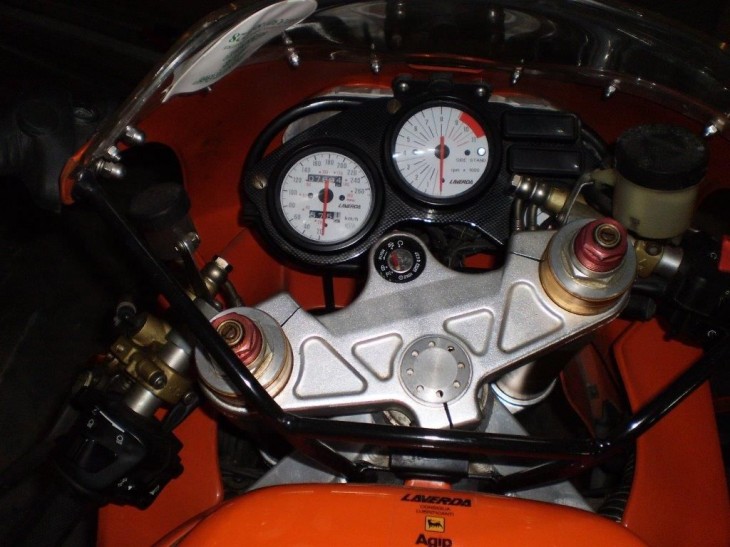 The second is the real gem in my opinion, a 2000 series 750 formula with the ultra-rare silver and orange paint scheme.  The 2000 series had all the upgrades including a new crank design and this bike is a Formula edition. The Formula was the hot/race version of the 750 series with special cams, advanced FI chip and carbon exhausts standard.   This particular one looks like a 1999/2000 series that has the 1998-1999 3 spoke wheels instead of the 1999-2000 lighter  5 spoke wheels but is otherwise correct.   The bikes are already appreciating and regularly win awards, including a recent first place in class at the Goodwin Festival of Speed.

Personally I don’t think the pics in the auction clearly show how stunningly beautiful the 2000 series bike really are so I have also included a link to some additional pics on the web.

This looks like an amazing opportunity that some lucky collector in the UK is going to get.  I think a collector could pick up one of these if so inclined but the smart collector could pick up both of these as a package deal for about 4000-5000 GBP.  As stated previously, the 750 formula has already started to appreciate so perhaps the buyer could tuck it away and let it continue to appreciate while enjoying the hell out of the air cooled 668 sport.  All I know is that even though personally I already own both a 668 sport and 2000 series formula, if I was in the UK I would be bidding.

Post Script:  For any us interested buyers, neither the 668 Sport nor the Silver/Orange 2000 750 Formula were ever offered for sale in the states so if you bought it and imported it you would have an uber rare bike.