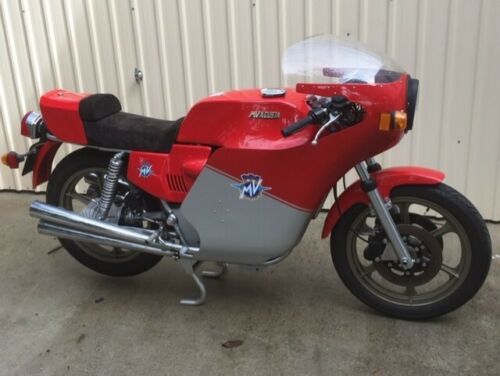 Let’s close out the recent spate of very beautiful MV Agusta models we’ve been posting in the last week or so with this beautiful example of the old school art. Designed before the days of Tamburini involvement, this classic 850 Monza has a look all its own, without the #metoo styling that seems more common today. This was the stuff of legends, the scoot of choice for riders such as Phil Read and Giacomo Augustini. Alas the glorious MV Agusta factory was already in financial free fall when this beauty was built, and plans were in play to exit the motorcycle space entirely. That makes the model among the last of the original MV Agusta line to be built. It took until 1980 for the last of the inventory to go, and with it went the hopes and dreams of the Agusta family. MV Agusta lay in dormant slumber until 1991, when Cagiva swooped in on trademark ownership rights, and set out to revive it with a bang – the new F4 models being introduced fully 20 years after this 850 Monza made its swan song. 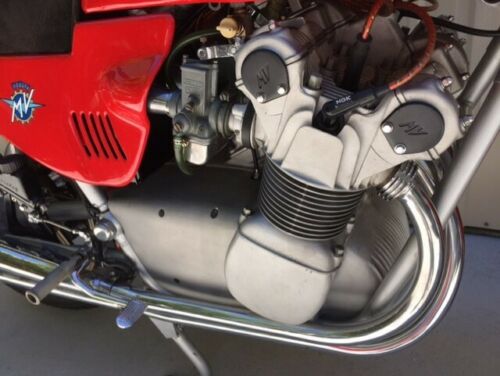 From the seller:
MV AGUSTA 850S MONZA 1978, ONE OF THE LAST 27X TO BE BUILT BEFORE THE FACTORY CEASED PRODUCTION OF MOTORCYCLES. ORIGINAL FULL FACTORY FAIRING. BIKE FULLY RESTORED 9 YEARS AGO WITH VERY LITTLE MILES SINCE. BEAUTIFUL CONDITION. COMES WITH ORIGINAL OWNERS MANUAL AND FULL DOCUMENTATION OF AUTHENTICITY 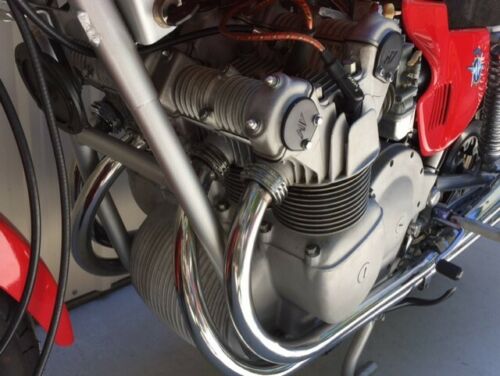 Powered by an 837cc air-cooled, inline four cylinder engine with DOHC, the Monza had but two valves per cylinder (while the Japanese competition offered four). The cylinder block was situated atop sand-cast cases that also housed the 5 speed transmission. Final drive was via shaft – a novelty in the sport bike world. Power was estimated to be in the 80-ish range, while weight was approximately 570 lbs. Perhaps the most interesting part about the 850 Monza is the last-gasp aspect of the design. History shows that the Monza bikes were actually unsold Americas which were tuned and and fitted with optional extras in order to move them. Originally based around the 750cc base design (check out the serial number), the Monza was also sold as an 832cc. Only the final 27 bikes carried the 850 moniker. Nomenclature also varied, as these were known as Boxers in the UK, and Super Daytonas in Germany, while being referred to as Monzas in the rest of the world. From an auction perspective Monzas are rare and valuable. The 832 variants are reliable high five digit sellers. This 850 Monza – the last of the original breed – is located in Australia and bidding begins at $110,000. That is very strong money, but considering this is one of 27 of the final model line, it just might be worth checking out. Pictures are few and with low resolution it is difficult to make out detail; serious bidders might want to request additional images. A fitting close to the flood of MV Agustas posted as of late, this is a nice example of old school art done right. Good Luck!! 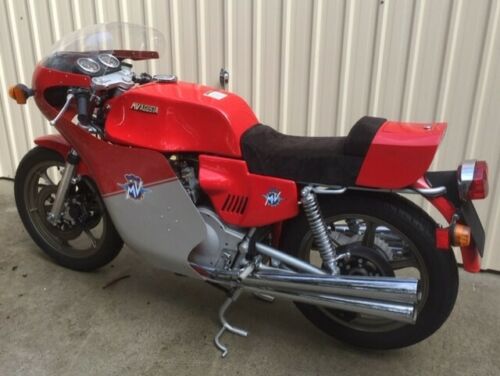