Sounds like a smashing deal, doesn’t it?  I thought so too, until I read that  a.) the bike is “stranded” in Europe  b.) it has been involved in an accident.  Now, before you write this bike off completely, let’s see how bad it’s been smacked up: 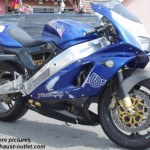 I’m selling this bike for a friend of mine. It was taken to Europe (Austria) 6 years ago and it’s still there since. The bike was involved in  an accident back in 2004 (A car ran over it in a parking lot). All plastic fairings are broken, clutch and brake lever, both handle bars,mirrors, windscreen, left side foot peg bracket, are broken, must be replaced . The gas tank and the frame is scratched and fixable.. Forks, rims, tires, radiator are good.. This bike has only 5630 original miles… it has aftermarket exhaust, carburetors, ignition module, chain and sprockets, new tires.. Florida clean title.. Vin#ZESSB6003WR000018 no warranty.  Runs and drives..

Now let’s look at what it is first: the SB6R is the 7th (I consider the SB6 to be the 6th) Bimota with a Suzuki engine in it, and this time it’s the bullet-proof water cooled GSX-R1100 engine.  It’s got a stout SLC (Straight Line Connection) perimeter beam frame, massive (at the time, and to a certain extent, even today for a RSU fork) 46mm Paoli forks, Ohlins rear shock, Brembo brakes, all nicely wrapped in some sexy clothing.

Building on the success of the earlier SB6 model (a total of 1144 units were built, the most popular Bimota model to date), the SB6R had some minor mechanical updates plus a completely redesigned set of bodywork.  The changes improved the handling and engine response over the SB6, which was already a very fast bike in itself.  The SB6R proved to be a popular model as well with 600 units sold, but to many Bimotistis, the SB6 is the prettier sister and remains one of the prettiest Bimotas ever.

Now, back to this specific crash-damaged, stranded-in-Europe sample: the damage list sounds extensive, but it doesn’t look TOO bad from the photos. Broken clutch and brake lever? Easy.  Handlebars?  No sweat.  Left side foot peg bracket?  Hello ebay! The gas tank and the frame is scratched and fixable.  The most concerning parts are the damaged bodywork, mirrors, and windscreen, but you wouldn’t be needing those for a streetfighter now, would you?

Which is basically how I see this bike as – a potentially very cool streetfighter project.  Of course, you can also rip off all the lights and turn it into a track bike, but I don’t see much point in that.  Or, you can replace the bodywork with a set of SB6 replacement fairings from Airtech Streamlining – that works too. However, for me, the best way is to stick a bikini fairing on it and custom fit a set of cool projectors lights, along with some street bike handlebars and top it all off with a nice subtle custom paint job. What better way to show off that beautiful polished SLC perimeter beam frame?