Ahh the 80’s….. Van Halen, Miami Vice, Parachute pants and don’t forget the “Member’s Only” jacket. I loved the 80’s and still do and in 1984 I was looking to trade in my 1983 GPZ 550 for something bigger. My neighbor, who just happened to own the local Kawasaki shop, was my salesmen. The decision was between this bike and the new GPZ900 Ninja, I really liked the Turbo but something told me he knew more than the press had lead on. He said the Turbo was great but was a bit “undecided” on when the boost would cut in, meaning that you could be in a turn and all of a sudden #$#$%^!! you get an extra 40hp you didn’t want. I took his advise and bought the 900 which ended up in 1985, Bike of The Year. This one’s on Ebay in San Antonio Texas with a “Buy It Now” of $5500, current bid about $2000 and a few days left on auction. It was one of if not THE fastest bike in production that year and got great reviews, even better then their new fuel injected GPZ1100  as it was lighter and a bit more power. 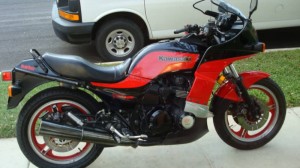 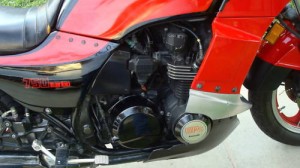 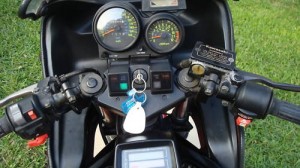 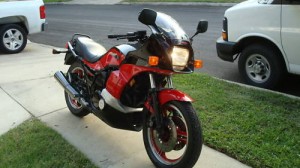 First a little background on the 750 Turbo In 1984 this was the fastest production bike in the world it was more powerful then the GPz 1100 but with the weight of a 750. Although many people refer to it as a GPz and it has the 2 engine emblems it is NOT a GPz the true name is ZX750E1 (E1 means turbo) but Kawasaki referred to it only as 750 turbo. It was basically a street legal race bike it used most of kawis racing technology with its uni trac suspension. They are digitally fuel injected and was built with one thing in mind speed… Check out the Kawasaki 750 Turbo presentation video on youtube

I bought the bike in May ’09 and put about 200 miles on it with no problems, then decided to send it in for a tune up and whatever else it needed to isure it would be reliable and safe for years to come. The work was done at a local shop named cycle rider the mechanic was a old kawi dealer technician that had worked on the turbo bikes since new. Although the bike ran nice and strong I had the entire bike gone through and inspected and had about $2,300 on it Which included: New Bridgestone Battleax Tires front and rear, new brakes front and rear, both new sprockets, new o-ring chain, forks resealed, oil change, air filter, spark plugs, timing chain tensioner, timing chain, valves were adjusted ( these bikes require it as part of schedule maintence), high speed wheel bearings, battery and thats just off the top of my head. since the work was performed ive put over 900 miles on it and still counting bike runs great no problems the only thing that doesnt work is the fuel gauge. I have the original owners manual and tool kit and i also will include a NOS seat cover with the bike.

The bike is All original and is in very good shape for its age just wax it and it looks almost new and the bike has a modern look for its age I get many compliments on its condition and most people dont believe its a 84. The paint is not flawless theres small scratches here and there as usual and some wear on the tank where your legs rub but you have to look close to see. The only visible damage i know of that dont show in pictures are cosmedic and its a small quarter size chip in the upper shroud which can be easily fixed and these a crack in the housing of the boost gauge (no damage to the gauge) all gauges work except for gas. Mechanically i havent had any problems I start it right up and just ride wherever the road takes me the bike runs strong, engine sounds tight and she purrs till the turbo spools its plenty fast and will give u a hell of a ride. I am selling due to slowing work im a contractor and I need the money to finish my GMC Sprint.    I have a clear Texas title in hand … The bike is bein sold AS IS …..the bike is also for sale locally so if it sells i will end the auction.

Conclusion; This bike looks really nice in the pic’s, at 23,000 miles it’s not really collector quality in my mind, but add the fact of how original it is does increase the price. These bikes weren’t that much new ($5500) in 1984, I believe the bike was about $4k-ish at that time. Though it is fairly in line with other cool original examples like the Suzuki GSXR’s of ’86, ’87 the decision really comes down to you. It’s not far off and if it can be had in the $4000 range I think it’s a great value that kept well, will just keep edging up in price. “God Bless Texas”.

Check out these other GPZ’s and parts for sale right now: