Kawasaki’s ZX-9R has always been a bit of mongrel bike; situated between the legendary ZX7 and ZX11 series, the 899cc bike was initially developed as a response to the Honda CBR900 but never achieved top status in the segment.  Although the configuration lasted for nearly 10 years, sales were never huge for Kawasaki and it isn’t considered to be a historically or technologically significant bike by collectors. Still today’s offering is an ultra clean model with less than 7000 miles in its over 23 years, is in the rare for the model candleberry-wine-red color scheme and appears to have all OEM bits available so it seemed worth of a post. 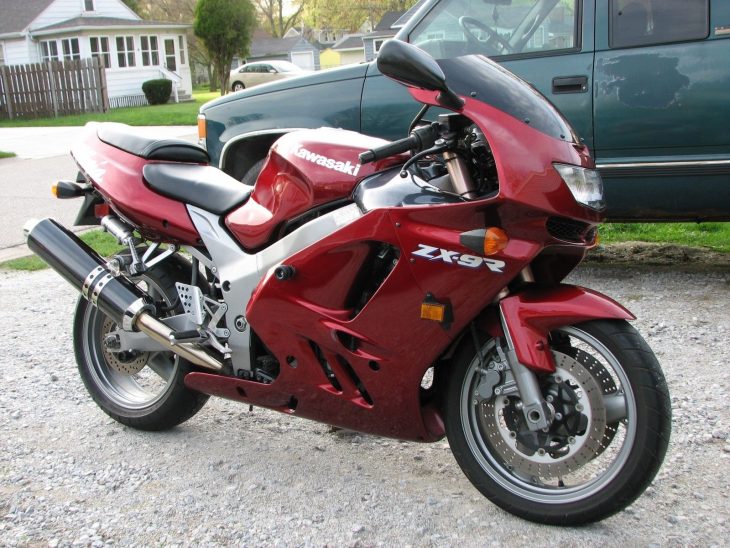 The ZX9R was somewhat hastily developed by Kawasaki as a segment response to the CBR900 Fireblade.  The problem for Kawasaki was that as a smaller manufacturer they didn’t have the resources to launch an all out assault against the class leading Honda (it would take a few more years until Yamaha’s R1 did that).    Kawasaki instead tried to stake out a middle ground, offering a 900cc bike that wasn’t an ultra-light-weight repli-racer fit only for the track but was also not a large capacity “sportbike” touring machine.  To do this Kawasaki essentially took their legendary but now outclassed ZX7/ZXR750 and incorporated a number of ZX11/ZZR-1100 design features.  Suspension was an upgrade over the 750 with fully adjustable 43 mm upside-down KYB front forks and a fully adjustable remote-reservoir KYB mono-shock while the brakes were Tokico front and rear.  The most obvious  change came in the engine but even there parts were shared with the majority of the engine pieces (crankcases, clutch and gearbox) coming from the 750cc while the cylinder head was from the ZX11/ZZR-11100 with different valve actuation.  The result was more grunt and a red line of 12,000 rpm (the Fireblade stopped at 10,500 rpm).  Put it all together and you got exactly what Kawasaki intended – a mid sized bike that existed between the ends of the segment. 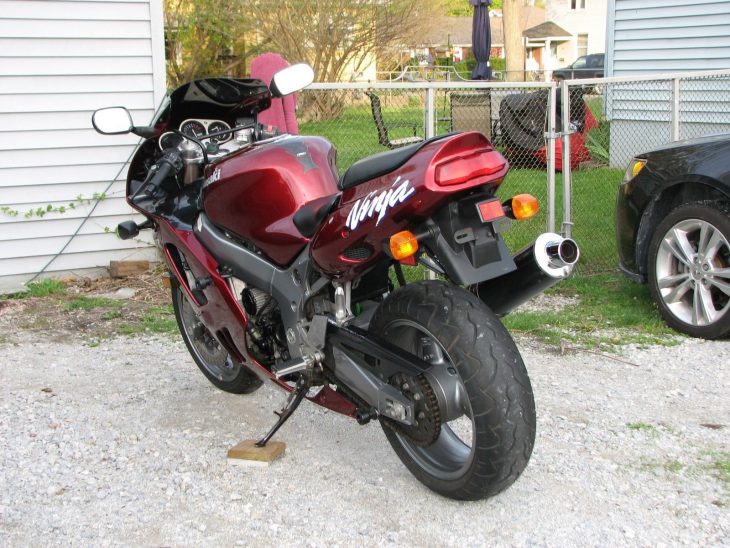 While the ZX9R delivered on its intended purpose, it never really developed a strong following like the Fireblade, GSXR or the soon to follow Yamaha R1.  In retrospect is seems Kawasaki  misjudged the long term impact of the “less is more” movement begun by the Fireblade.  Also the first models of the ZX9R were heavier compared to the competition and had the typical-of-the-time Kawasaki build quality issues, especially with the paint. 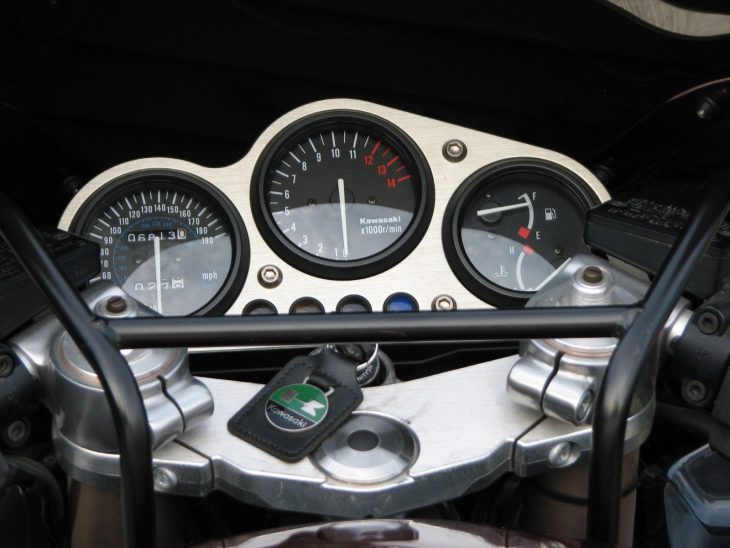 As for this particular ZX9R, the bike looks to almost completely OEM but the pictures aren’t the best…I mean seriously, how hard would it have been to move the truck?  The seller doesn’t give any service info other than “newish tires” so I would expect there to be a need for fresh fluids with particular attention paid to the brake system (a known issue for Kawasaki bikes of this period if left standing for long periods).  On the plus side the bike looks clean with no evidence of indicator or rear tail modifications common of the era and even the exhaust looks OEM and pristine.  The only non-stock item appears to be the windscreen and the seller indicates the OEM unit will be included in the sale. 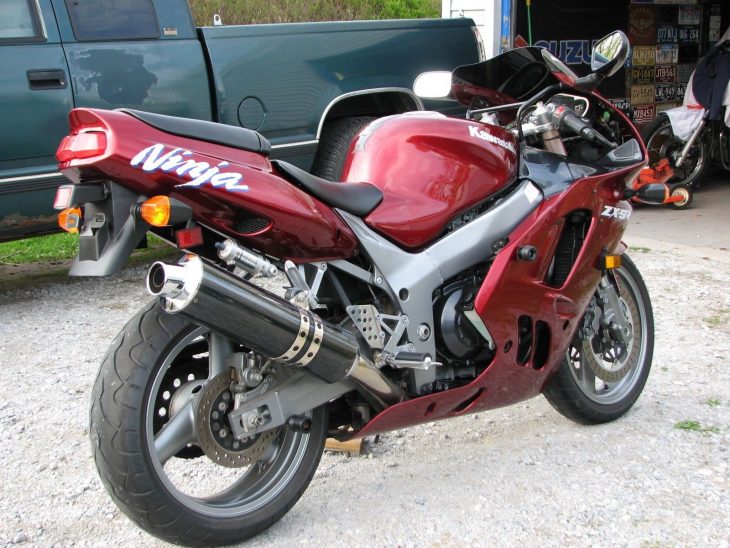 So let’s jump to the question – is this low mileage and apparently almost completely OEM ZX9R worth the current Buy-It-Now price of of $3999 USD?  Well a quick search through sites like Cycletrader show that price to be a bit more than expected but not out of range given the mileage of this bike.   As for value, I don’t think this one will appeal to collectors and will probably never appreciate significantly but it isn’t something you are going to see at your local bike night and might also be a good fit for people who always liked the bigger ZX11/ZZR1100 in this color scheme but found that bike too big to handle easily.  Based on the pics and the mileage the current owner is not a major Kawasaki fan so they might be motivated to move off the asking price, especially if you can offer something Suzuki-related in trade?