Don’t ask me why, but I really have no idea why Moto Guzzi made this bike. The company at the time had just been bought by Aprilia in 2000 for 65 million euros and Aprilia (I guess) wanted to take the company in a little different direction, hence the MGS01. It was 2003 and I was visiting Aprilia and Moto Guzzi factories on our yearly dealer trip. At the Moto Guzzi factory they were very excited to show us the first finished MGS01, sure it was cool but who’s going to buy such an expensive air cooled shaft drive race bike? I remember Doug Polen took the bike for a few laps in California, there was a small press release about it and then the whole thing just died. They were available to US Moto Guzzi dealers via special order, I believe the cost was about $35k.  In 2004 the Piaggio Group buys Aprilia and gets Moto Guzzi in that package, still the brand struggles to keep afloat, kinda sad since the old Guzzi’s from the 70’s and earlier are really cool. My tag line for Guzzi stills stands, “Moto Guzzi, going out of business since 1921”. Here’s the real deal on EBay located in Christchurch (that name just cracks me up), New Zealand. Click for the jump to EBay. 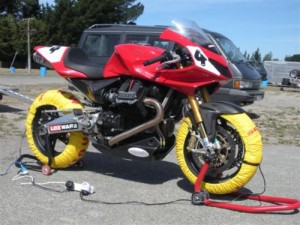 With a starting bid of $39,999 US, the ad reads: Moto Guzzi MGS01 Race Bike. Super exotic racer in top condition. Competitive ‘Sound of Thunder’ racer, rare as hen’s teeth. Most of these are in the hands of collectors and have never been fired up, this one’s a winner. Worldwide freight easily arranged, you could be racing this in a few weeks. All questions answered, cheers Chris.Thanks for looking

I’m not sure if I’ve ever seen a used one for sale so I don’t have much data on pricing. I’m sure it will be really collectable at some point in time but for now since it’s air cooled, makes a killer BOT (battle of the twins) class racer. I remember the bike was very trick for what it is, it’s not something just thrown together, it was well thought out and a full on race bike. Well in any case, let’s all watch and see what this thing does…good luck Chris!