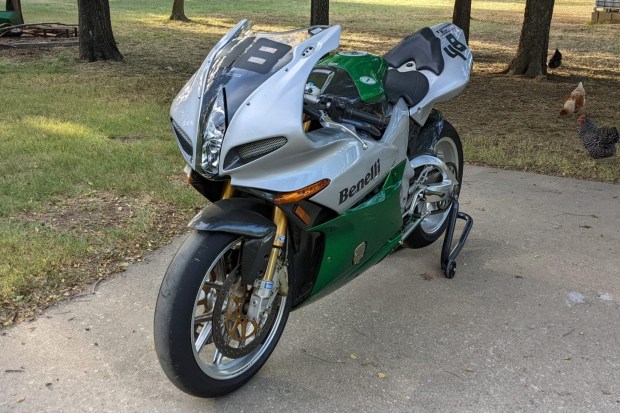 China’s quest for world domination is truly an interesting story. From building strings-attached infrastructure in the third world to selling US companies suspect equipment, they are doing it all. The overall strategy is to slowly sink in their teeth over 20,30,40 years and play the long con. So that begs the question: Was the Benelli acquisition a hope to not only dominate the world economy, but also WSBK tracks? Jealous of the Japanese?

Today’s find is something that pre-dated Benelli’s transition to Chinesium frames and is truly, in my opinion, one of the more interesting bikes to come out of the region for a few reasons: rarity, technology, and looks. 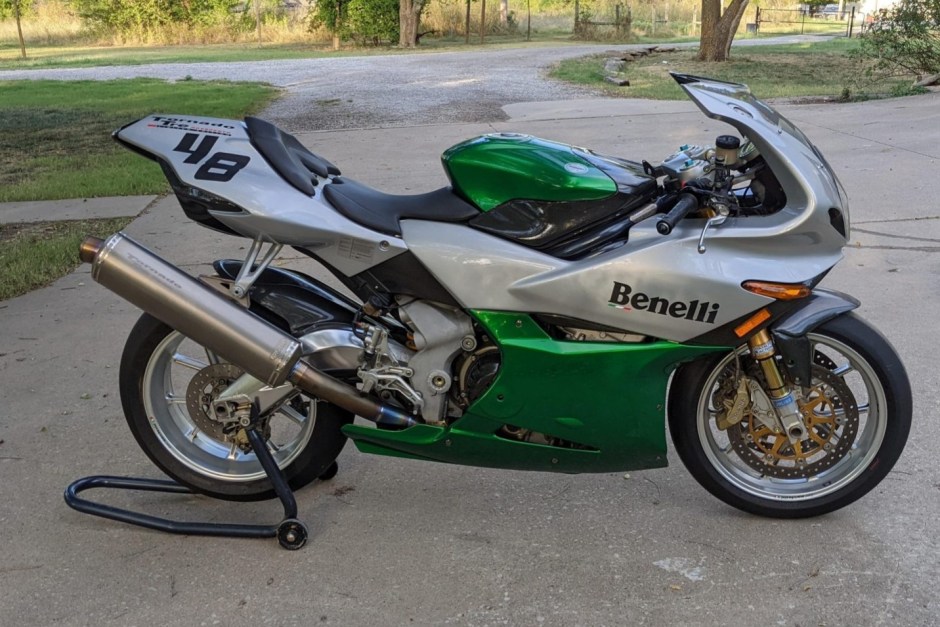 Likely inspired by the racing success of Aprilia and Ducati, the Benelli execs decided they wanted to venture over to the track and enter their own bike in the highly competitive WSBK Championship. Presumably, with the hopes of getting a slice of the exploding sportbike market with a few of their own offerings. With their sights set on WSBK, they needed to build 125 bikes, commonly referred to as homologation specials, for the market in order to gain a spot on the grid. Our seller today has number 107/150 so it is safe to say that there were not many of the much more well-equipped LE models out there.

In 2001, the Tornado did actually debut at Misano under Peter Goddard. Their WSBK hopes faded as they saw little success and the Chinese were looming amidst the lacking sales. 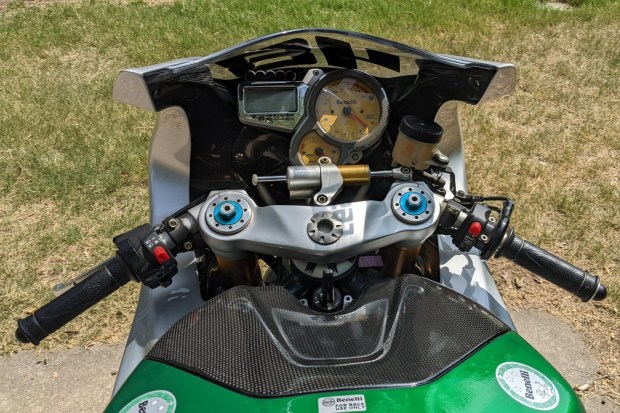 The LE edition has all sorts of special go-fast bits. As seen above, the bodywork is carbon and an ExtremeTech steering damper came standard on the bike as well. Furthermore, you get Ohlins front/rear suspenders, 320mm Brembos,magnesium wheels, and an Arrow exhaust. A couple of design quirks that are not as visible are the glued frame and repositioned radiator. The engineers opted to go for weight savings by not welding the frame but rather using an aircraft-spec glue to hold it together. Many modern cars actually use a lot of adhesives nowadays in order to achieve more rigidity while not compromising on weight. The general idea is that glue can tie together more surface area than a weld. The other interesting design quirk is the positioning of the radiator. The Tornado’s radiator lives below the seat and uses two undertail cooling fans to help flow air through the back of the bike. The reason was to be able to decrease the rake to 23.5 degrees which makes the steering inputs more responsive. 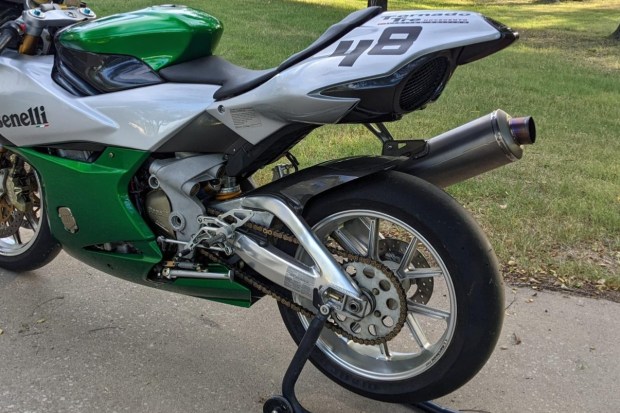 I personally think a lot of the Italian sportbikes from the 2000s are actually quite ugly, except the 748 and 996 of course. The designs just haven’t aged like the Japanese designs have for me. However, this Tornado is something else. All the aggressive lines just seem to work. The polished and gold aluminum mesh really well with the gray/green bodywork to give a fast, exotic look. The undertail fans look like jets too so that’s pretty cool.

“Equipment includes carbon-fiber bodywork and fuel tank, a solo seat, electronic fuel injection, a rear-mounted radiator, electronic ignition, a three-into-one exhaust system with a titanium Arrow muffler, a magnesium lower engine case, Öhlins suspension, triple Brembo disc brakes, a Robby Moto throttle and rearsets, and Marchesini 16″ forged wheels. The alternator gear and shaft were replaced per the Z25 service bulletin, and an oil change was performed in March 2022. This 900LE is offered in Oklahoma with a cover, a suitcase with suspension and sprocket parts, three stands, spare parts, and a clean California title in the seller’s name”

Values of the Tornado have been not been great over the years. However, the homologation specials are definitely the edition to have and would certainly keep up in any collection or bike show. It’s Italian exotica and they’re still relatively cheap as they don’t carry the brand equity today like they used to. The one downside would likely be parts and service as Benelli’s service network (if you can call it that) is likely not well-versed with this bike. The upside is that it’s simple drivetrain that a smart mechanic could probably sort out with the help of a service manual. The engine is also the exact same as the regular Tornado models so you can probably swap parts over except for some special magnesium engine cover parts on the LE model. Great condition. Low miles. Startup and walk around video are on the listing as well. Sounds nasty.

For some reason, of all the bikes I’ve written about here, this is one the that I would ride if I got to pick one. Unmatched cool factor. The bike is being sold on BaT and the bid is currently at $5,500. Good luck!