It’s winter time, at least here, north of the Alps in Switzerland. The roads are mostly wet when not frozen, the sky is grey and the mood is low. The 2012 MotoGP season just ended with a marvelous race of Pedrosa who won this season’s last race starting from the pits. A long wait is ahead of us before we’ll be able to enjoy our beloved bikes by riding them ion the road. While some of us spend winter on their next café racer project or making small repairs, some others look out for the next amazing deal. I find the time between November and February the best to grab a good buy. And this one seems one of those: 1992 Honda CBR 900 RR Fireblade  in its first version white-red-purple color scheme: 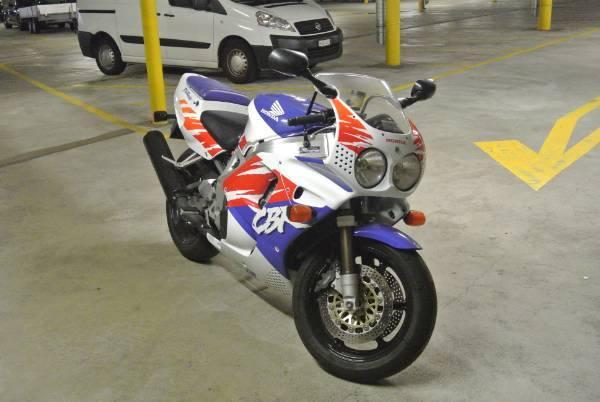 With just 23000 km on the clock and in fully original condition this is a rare find. 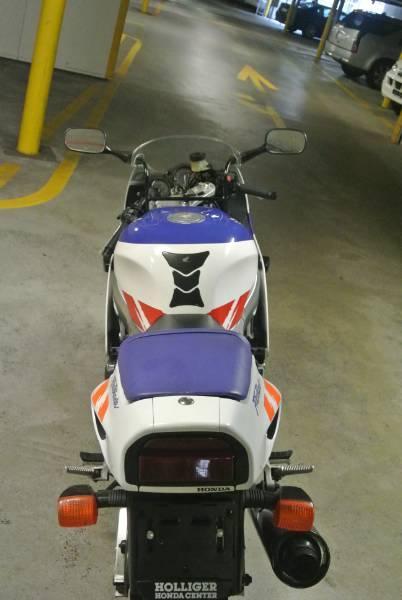 The 1992 Fireblade stormed the world of motorcycles in my modest opinion in a way that might resemble the introduction of the Honda CB 750 (by many considered the first Superbike ever). Anyone should ride a Blade to appreciate what this bike is. The first thing you will notice is its lightweight. Closely followed by the superb refinement of the engine and plenty of very usable torque. In the real life = riding a sport bike on public streets, squeezing between cars in traffic while you are on your way to work  and hit the twisties on the weekend, you will for sure recognize the qualities associated with it. Its smoothness is mind blowing, the clutch operation and performance is great in the traffic, the linear power of the engine from down low, the lightness and quick steering (the first versions had a 16″ at the front and a 17″ at the rear, just like the RC 45), make it a great tool on the mountain roads as well. Choose a road with many corners, stick in 3rd gear for most of the time and 4th when it straightens a bit and you’ll be moving fast and smoothly. When riding the 900RR  nowadays, it’s not about maximum performance that you’ll be after but rather pure enjoyment of flicking between corners in perfect armory between man and machine. This bike really is your everyday do-it all super-bike. I was lucky enough to grab one with less than 5000km a few months ago, and while my garage is busy with quite some exciting bikes I found myself grabbing the first Honda RR most of the times. Once you are on it, you just want to go on and on…The only aspect that  I noticed that could be a bit better is the travel of the gear lever which I found longer than other sport bikes of this time. We all know that prices of Honda RC30s are going through the roof despite the world economic crises but  I reckon that most people are missing out on the real deal. Fireblades are probably the most reliable bikes ever made, they are lighter than an RC30, they have plenty of torque and a full bike will cost as much as a side fairing of the exotic HRC. If you like reading RSBFS you probably share with us a true passion for sport bikes beyond the obvious and glamourous badges. While prices of these machines are at their very minimum, do yourself a favor and look for one of the the early original Blades like this 1992 model: 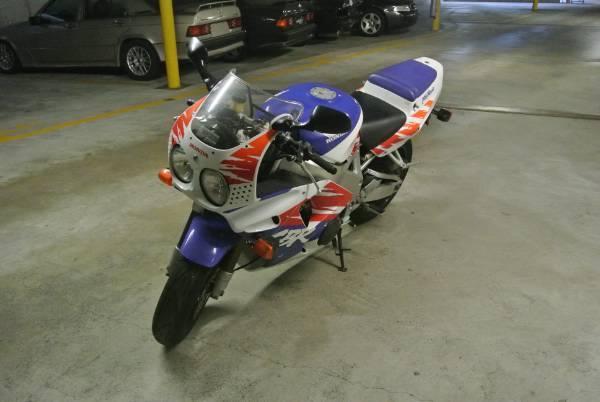 Pictures are few but the conditions seem very good as demonstrated by the absence of a carbon can, the presence of the original turn lights and the low mileage. This is bike is on sale on the Swiss auction website Ricardo.ch at a fixed price of 4200 $ (for details click on link below). While cheaper samples can be found on the market, it will be really hard to find the 1992 version in this condition.