We’ve been having a little discussion within the team about posting foreign bikes for sale, and the general consensus seems that if the bike is unique enough and as long as we don’t do it too often, its OK.  So you may start seeing a few more (but not too many) international listings popping up – which I think is a good thing. A Rare Sport Bike is a Rare Sport Bike no matter where it is, right?

Like this 1986 Walter Wolf edition RG500 for sale in Oakville, Ontario, Canada that our reader Martin sent in (now why didn’t I see this when I was attending high school in Oakville?!): 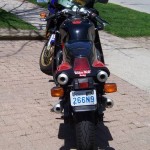 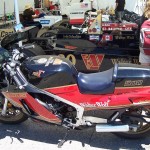 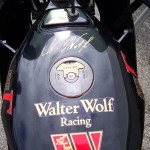 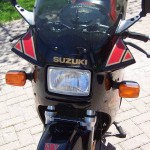 All original Walter Wolf Gamma (Signed in person by Walter wolf himself). Pictures to prove it. This is truly a one and only and is geared toward the true collector. Bike is all original with 38,700kms. Runs and looks great. Signature across top of tank in matching gold paint pen. Bike was professionally appraised in early 2007 at $15,000, prior to Mr. Wolf signing the bike. (Appraisal will go with the bike). It has only grown in value since I obtained the signature. Mr. Wolf claims it is not only the first one he has ever seen, but the first and only he has signed. As with all gammas, there are a few minor spider cracks around some of the fairing connectors. This bike needs to be seen to be appreciated. Never dropped or abused. Very clean and still one of the most iconic sport bikes ever.

The RG500 Gamma is one of the most iconic sport bikes, and the Walter Wolf Racing edition is even more desirable (for me anyway).  Check out this RG400 that we listed before (with RG500 video).

So what is (or rather, who is) Walter Wolf?  Walter is a rich Canadian businessman (I think he is in the oil business) with a keen interest so he set up Walter Wolf Racing and even ran a F1 team from 1976 – 1980.  Here’s more info on this interesting gentleman.

If I have the money to buy an RG500, it would definitely be a Walter Wolf Racing edition.  And while I’m at it, I definitely wouldn’t mind picking up one of them F1 cars in the background to complete the set!