Its well established that the GSX-R 750 is one of the genesis bikes for any serious sportbike collector.  But the GSX-R range also included both the 1100cc and a 600cc series, and each has its devotees.   Here we have a pristine 1998 600cc version, which was the second generation version that that incorporated Suzuki’s radical redesign SRAD functionality. The smaller Suzuki GSX-R had the same basic chassis as the 750cc model which was based on Suzuki’s RGV500 race bike so it’s not surprising the smaller GSX-R rode really well.  As for the engine, the 1996-1997 models were flat at the low end of the rev range but had lots of power at the top of the range.  Fortunately, this is a 1998 model, which is when Suzuki re-tuned the engine to give the 600cc edition more midrange.  Also, for a late 1990’s 600cc sportibke the GSX-R600 was surprisingly comfortable, with a pillion pad hidden beneath the rear cowling and excellent wind protection.  (NOTE:  But like a lot of late 1990’s sportbikes, a forward oriented riding position means wrists can ache after a while).

An excellent series of actual owners reviews can be read at VisorDown.com by clicking here. I can still remember when Suzuki re-launched the 600cc model with the the SRAD/Suzuki Ram Air Direct technology on it.  The GSX-R600 promptly laid waste to the rest of the 600cc class with its combination of light weight (384 pounds) and 96 hp and in some dealerships SRAD wasn’t the only four-letter word the competition was muttering. Basically the GSX-R600 was simply THE 600cc/middleweight sportbike to have. This particular GSX-600R looks to be in really pristine shape but not everything is OEM.   A few non-stock parts are identified, including a double bubble screen, slip on yoshi exhaust and crash protectors.  The seller also states a previous owner cut the rear mudguard which ws a common modification back in 1998.  Also some paint is rubbed of the top the triple tree but otherwise the bike looks pretty much OEM/stock.

On the plus side, the seller appears to be a bit of a collector and is pretty clear in the auction description about the condition of the bike.   Some extra perks include some OEM parts being available and fresh rubber already installed.

Here is a summary of what the seller states 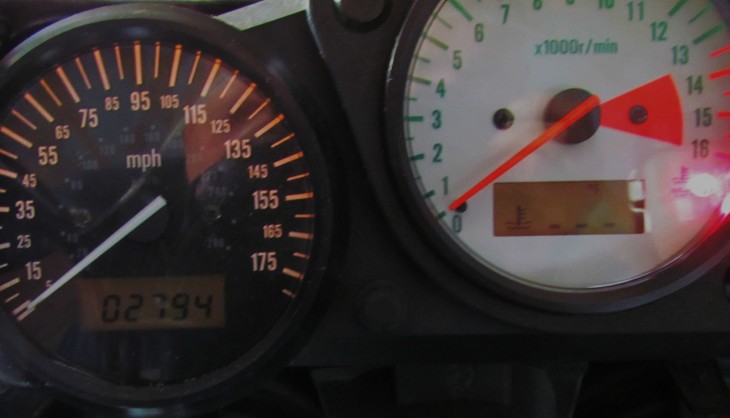 Is the 2nd gen 600cc worht the $3,400 USD asking price?  Well the price is a bit higher than previous 2nd edition GSX-R600’s seem on ebay over the last 12 months.  But its important to recognize that all the 2nd generation Suzuki SRAD editions seem to be jumping up in value lately and the 600cc version is particularly hard to find in this condition.

Personally I think an offer of somewhere between $3000 and $3300 would be fair for both buyer and seller.   The new owner could perhaps relive a bit of their youth (has it really been over 17 years since this bike came out?  yikes!- MARTY) and then easily restore back to full OEM condition and enjoy some price appreciation.