We have 15 years of archives. Please note that posts over a year old may have been updated to point to similar bikes available to bid on eBay.
Bimota January 12, 2015 posted by Marty
Share

1.12.2015: Originally we first saw this DB1 SR available in October of last year. It failed to meet reserve reaching just over $31k. Now back on the market, just after the Vegas auctions, it is listed with a $45k buy-it-now. Thanks for all those who emailed with the heads up. Links updated.-dc

Here is some true unobtanium; a still in the crate 1987 Bimota DB1 SR.

For motorcycle collectors, there are two main types of bikes; the survivor and the New Old Stock (NOS). Survivor bikes can be bikes that weren’t popular in their time but are now desired such as the Honda CX turbo editions . They can also be bikes that that were popular but are now hard to find in good condition such as a 1st generation GSX-R 750 slingshot.

New old stock/NOS bikes are quite a different matter; they seem to either be something a dealership had tucked away or something a collector bought and are usually in pristine condition with very low mileage. While NOS bikes ares rare, we do see them reasonably frequently here on RSBFS. But within the NOS segment there is an even rarer sub-group; bikes that are still in their original crates. There have been less than 10 NOS Crate bikes on RSBFS since this sites inception, so this Bimota DB1 SR is really something quite special. 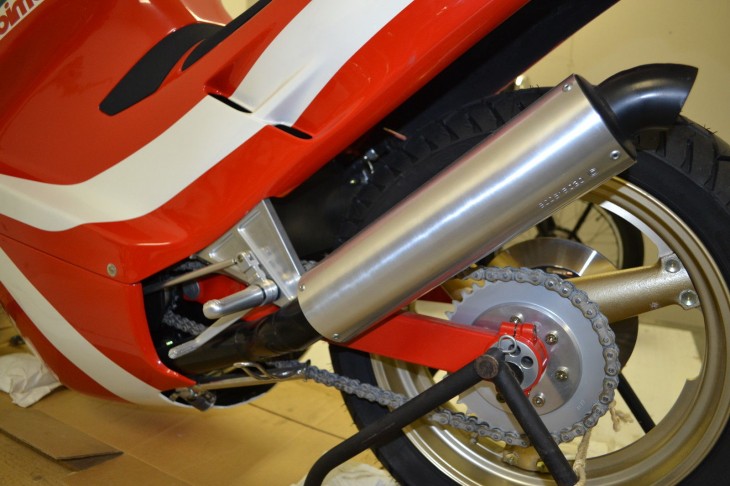 The Bimota DB1 was offered between 1985 and 1990 and was designed by Bimota’s Technical Director and ex-Ducati engineer, Dr. Frederico Martini. The DB1 stands for Ducati Bimota One which makes sense since it was the first Bimota powered by a Ducati engine.

The DB1SR is an even higher performance version of the “standard” DB1. The SR model came with 4-piston front calipers, 41 mm carburetors instead of the standard 36mm, freer 2-into-1 exhaust and more radical cam shafts. The SR model was only made between 1987 and 1989 and in performance it was frequently compared to Ducati’s Laguna Seca/Montjuich/Santa Monica models of the 750 F1s. Confusingly, many of the ealy DB1SRs are labeled “DB1RS” on the fairing. Later models were styled a bit differently with a rear red number plates and correctly labeled “DB1SR”. The DB1SR was successfully raced in Italy by Tiziano Bombardi, winning the 1987 Italian Sport Production Twins Championship, finishing on top of the podium in 8 of the 9 races, with one second place finish. 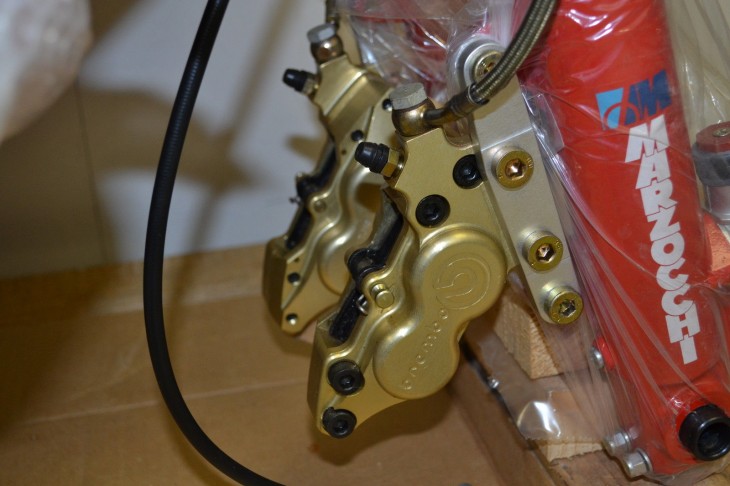 Here is a portion of what the seller has to say:

This DB1SR is quite possibly one of only two still in their original shipping crates. When the current owner received this bike, he raised the crate top off the platform for only the second time since its departure from Rimini, Italy; the first time being at Canada Custom when it first arrived in our country.

It’s still mounted to the crate base and still shows some floor dust on the tires from the manufacturer wheeling it across the floor to be crated. The current owner simply couldn’t bear to have this beautiful Italian gem hidden in the crate, so he carefully removed the top and packaging so the bike could be displayed still strapped to the base. The crate top and packaging have been carefully stored.

In 1987 only 153 DB1SR motorcycles were made – and of these, most went to Japan. Although I’ve seen a pair of the later SR Serie Finale in North America, I’ve not seen one of these on our shores. This amazing piece of performance art was originally imported by the legendary Frank Romanelli – who indicated that this unit was destined for the market in France and should by all accounts, not have been directly exported to Canada. 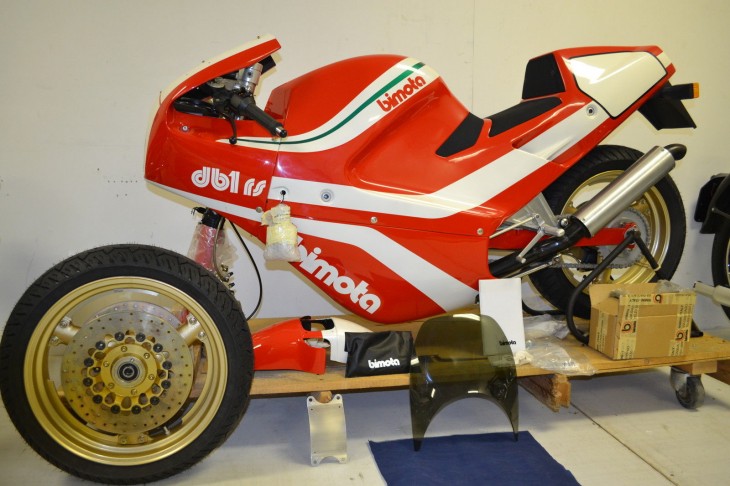 So of course now we come to the big question, what’s it gonna take to get it? Well the DB1 is pretty rare by itself. The few previous DB1’s that have appeared on RSBFS have all gone for between 30-40k USD and given the fact that this is a still-in-the-crate bike, I would expect the ebay reserve to be at the upper end of that range. It is certainly an amazing opportunity for a serious collector to acquire a rare bike and given the recent decline of the Canadian dollar, might even be available at a bit of a discount.

Post Script: The same seller is also offering a nice 1986 Ducati BOTT Racer which can be seen here. 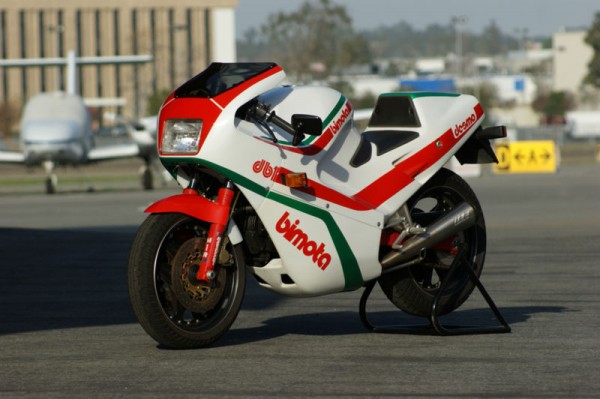 Que the music to Jaws.  After the great Bimota sell off of the Spring of 2012, I wanted to make sure it was safe to post a Bimota again without angering the RSBFS masses.  This isn’t the average Bimota SB so I thought it might be accepted. Before your hot little fingers scroll down to the comments section to tell me these are pictures of two different motorcycles:  pause for a moment.  This is a DB1 with an extra set of DB1SR clothes.

The seller has been kind enough to provide you with this visual aide: 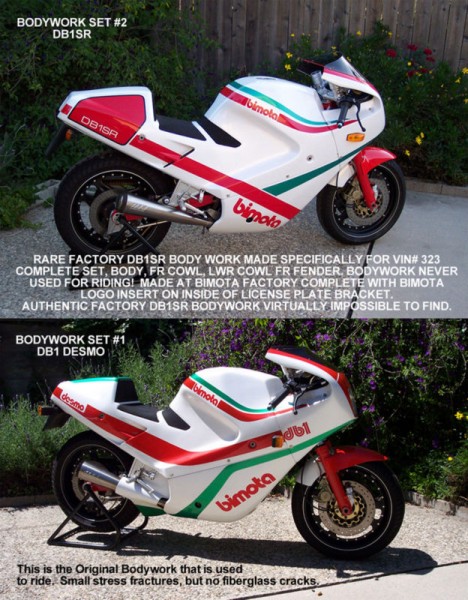 Apparently there was a little damage to the bodywork in shipping and the seller picks up the story there:

After the shipping incident, the Bimota factory was then contacted by the previous owner, and it took Bimota over 1.5 years to find the molds and create a complete new set of bodywork, specifically for this bike.  What makes this DB1 even more rare, is that the Bimota Factory willingly and knowingly, made and shipped a complete set of DB1”SR” bodywork for the “Desmo” DB1 VIN# 323.  The “Desmo” bodywork was on the bike and is in the same condition as when purchased, and holes were never drilled into fairing to accommodate the “Californian” mirrors (current mirror is bar-end mirror only on left side).  The “Desmo” fairing is used for riding.  The DB1”SR” fairing has never been used for riding, only put on bike for pictures by previous owner (see attached comparison pic).  Being 26 years old, the “SR” seat foam, although never ridden, has of course begun to crack.  We will include a new set of foam pads you can replace the old ones with.  New pads will resemble the seat pads seen on in the “Desmo” bodywork pics.   THE DB1”SR” BODYWORK IS NOT A REPRODUCTION and includes a small Bimota logo placard embedded behind license plate bracket. 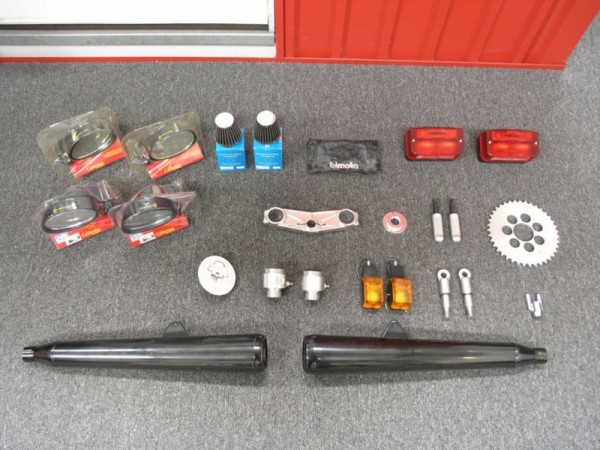 I thought this was a pretty cool extra.

The DB1 is currently tuned with Supertrapp exhaust tips, previous owner took off the original exhaust tips and they were never included when we purchased.  However, it also comes with a pair of rare, BRAND NEW, NEVER INSTALLED — CONTI EXHAUST TIPS — specifically for the Bimota DB1 complete with hardware specific to the DB1 (in original Conti shipping box). 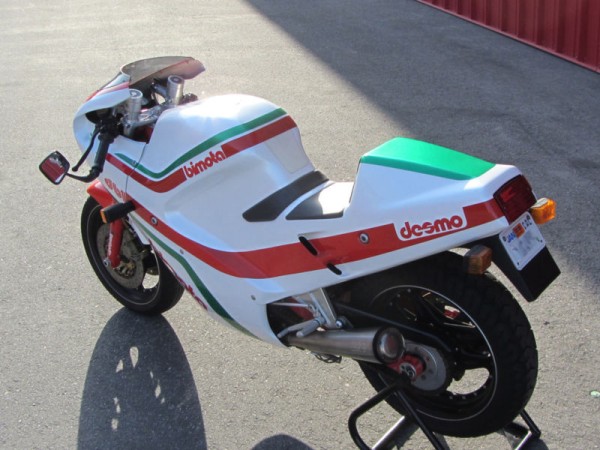 Bimota’s obviously are rare and I think you can argue these are rare amongst Bimota models.  The seller gives numbers of 453 produces and only 12 imported into the States.  I think it is just a sharp little bike that stands out in a sea of ordinary.

Take your shot at the auction here. 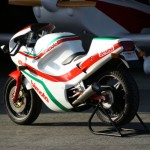 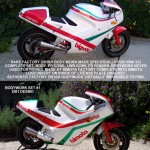 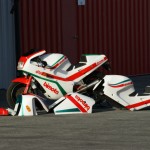 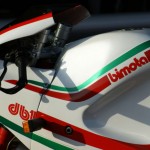 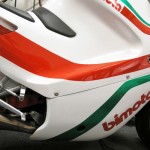 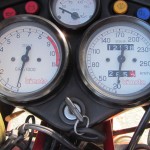 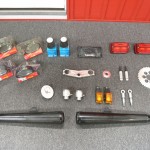 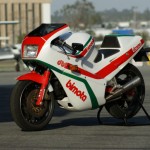 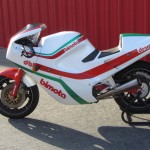 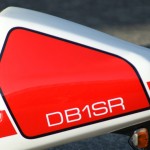 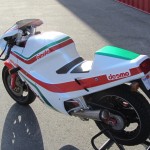 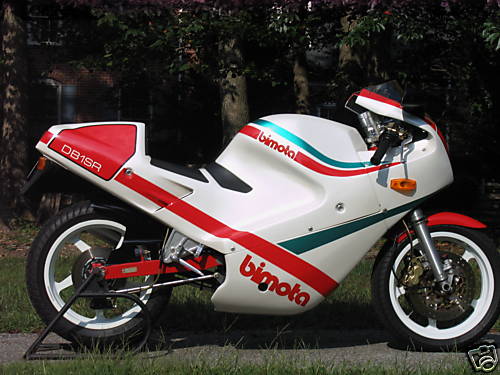 Located in Sliver Spring, Maryland is a very cool 1990 Bimota DB1SR.  This bike is in amazing original condition with 3,475 miles.  The seller states that this is one of only two known to be in the U.S.; also included is a general description of the FE DB1: 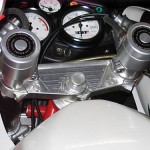 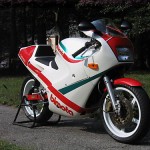 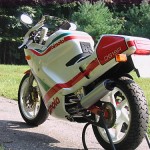 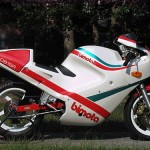 Known as the “Green Stripe DB1SR” (tri-color vs. the two of the regular DB1SR) it is considered to represent the ultimate refinement of the trestle type space tube frame and telescopic fork design. The “Series Finale” is particularly special due to its different forks, wheels, brakes and two into one exhaust. The motor produces 90- 95 hp (*manufactures claim) fitted with 41.5 Malossi carburetors and with a dry weight of 368 lbs and 406 lbs wet, bringing this DB1SR to a level of performance few can appreciate.