We have 15 years of archives. Please note that posts over a year old may have been updated to point to similar bikes available to bid on eBay.
Honda November 16, 2009 posted by Alex
Share

UPDATE: This listing is either a scam or borrowing pictures that aren’t of the actual bike for sale. We know because the bike in the pictures was listed on this site and the actual owner is a friend of RSBFS. Anthony informs me that his bike is not for sale and he’s flagging the listing.

Located in Ballard, Washington is a titled and registered Honda NSR250 MC21.  The seller doesn’t list much information but, if you’re looking for a NSR, you know what this is and where to find him.  Lastly, the asking price seems a fair $5,500 depending on miles and condition–which look to be low and excellent.  See the Craigslist ad here. 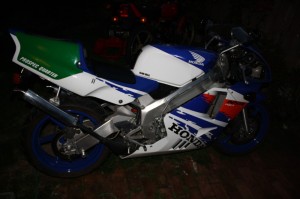 Located in San Diego, California is an untitled 1991 Honda NSR250.  This bike needs a battery and new rings for the rear cylinder (safe to say a whole new top end).  This bike needs work and isn’t titled but it is priced fairly at $2,800.  If you have mechanical and great people skills, this could be the bike for you.  See the bike on Craigslist here. Since becoming an author on RSBFS, I have become more interested in 2 strokes.  I have always been a huge fan of the limited production 4 stroke race bikes, but I can see myself picking one of these up real soon. 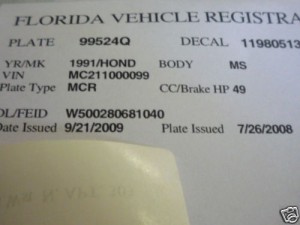 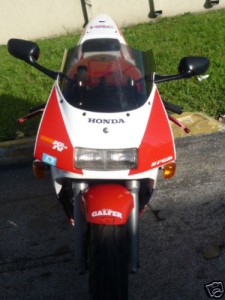 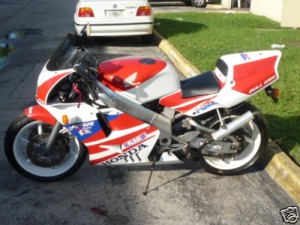 With 12,584 miles on the clock this one is used and ready to ride.  The pictures show some wear and tear, but I did a quick search and the starting price seems to be market correct when considering the condition.  The plus is this one appears to have the ever elusive registration that was current up until yesterday.  The seller posted a lot of pictures on ebay that show some of the age marks; you can  to view them.  This one is not a garage queen so it can be ridden without fear of someone scratching it.

The seller didn’t have much to say about the bike so I won’t post up any quotes, but the one thing I did notice about this particular MC 21 and that is it comes with the aftermarket “go fast stickers!”

Located in Tampa, Florida is a Chesterfield Replica 1993 Honda NSR250.  I’m not aware of an official Chesterfield replica from Honda–someone please correct me if I’m wrong–but it looks like a professionally done replica if it isn’t from the factory and it doesn’t look to be eBay plastics.  The bike looks to be in very good condition except for possibly being down on its right side, however, it could just be in the photo.  The seller doesn’t state if it’s titled, registered, or what kind of money he is looking for.  The seller does have a pretty extensive collection with some decent looking bikes.  See the Craigslit ad here. 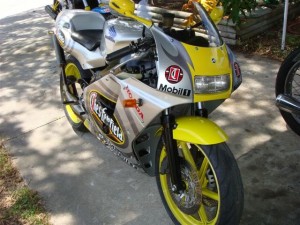 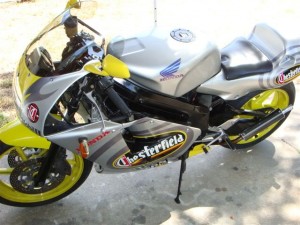 Update: This post is pretty outdated. Check out these NSR’s on eBay right now: 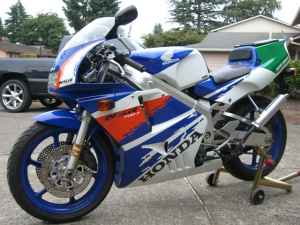 quote from the seller’s CL listing:

1993 Honda NSR 250
9525 miles. Clean title, never down. All original. A very rare bike in the US.
Adult owned and well cared for. Always stored in a dry climate controlled garage. This bike is MINT.

Located in Pasadena, California is a very nice 1991 Honda NSR250R in Repsol Honda colors.  The description is sparse but it does state that this example is California titled and registered.  Regardless of the ad, this looks to be a very nice example, and with an asking price of $6,400, worth looking into.  See the Craigslist ad here. 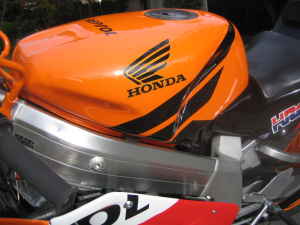 Let me start by wishing all a happy fourth of July!  Located in Mansfield, Ohio is a NSR250 & NSR50 both in good, track condition, but untitled.  The NSR250 has RVF400 inverted forks, Tyga exhaust, and HRC front head upgrade.  The plastics aren’t factory, but said to be in good condition.  The NSR50 is in the process of being converted to a street bike.  Seller states that it has some cracks in the plastics and could use a front tire.  Seller also claims that the NSR50 is on a MSO, so it should be easily titled, but, I wouldn’t guarantee that depending on your state–the fifties were never street legal here.  If you’re interested, see the Craigslist ad here. Update: This bike is mislabeled in the ad as an MC28, but is actually an MC21. Thanks for the heads up in the comments Mick!

I know the blog has been going 2-stroke mad, but with so many exmaples coming out for sale can you blame us?! Check out the latest in this 1994 Honda NSR250R For Sale in Seattle for $5500: 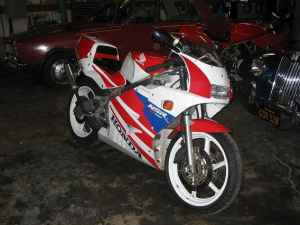 According to this NSR250 historical site, the MC28 has the following updates:

On November 11, 1993 the all new MC28 model NSR went on sale in Japan as a 1994 model. It was completely different than previous models and changed peoples thinking about two stroke technology. The new Proarm NSR’s as they became known in Japan were the ultimate 250 bike for the street. They had PGM IV technology which allowed more accurate1994 NSR 250 R – 57K for more control of the carbs, smooth operation and perfect driving manners unlike past two stroke bikes. The all new Memory card replaced the standard key and made de-restricting the bikes very difficult. The 1994 lineup saw three types of NSR’s for sale once again. There was the standard 250R type model in fighting red and Ross white. They were sold with a regular wet type clutch and non adjustable suspension. They were priced at 680,000 Yen.

A very significant bike, with a title, and in the PNW! I may have to consider selling my 93 Ducati 750SS if these super rare and available bikes keep popping up!