Note:  This listing was removed from ebay (sold?) while in the queue for posting here on RSBFS but the post contains some interesting info so we decided to put it up anyway.  If we hear from the seller as to what price it went for, we will update in the comments.

Here is a zane-era Laverda 750 Formula which is probably the most collectible model of the later Laverda models.  Only produced in 1998 and 1999, the Formula was the top shelf bike in the lineup during the brief-rebirth of the Laverda marque.  This one is especially rare due to its having the updated/Type 3 crank installed of which less than 100 were produced. 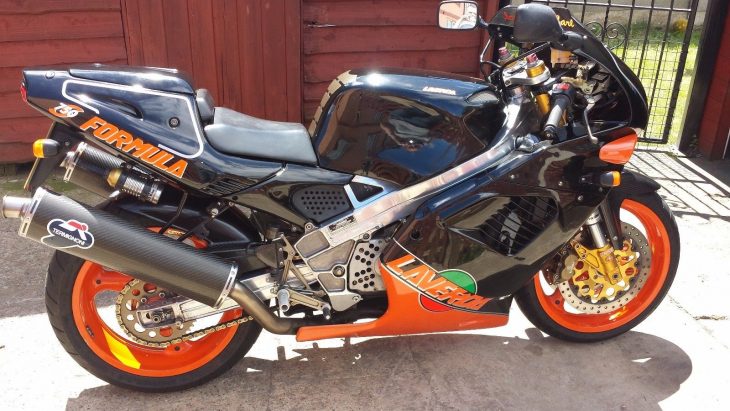 For anyone not familiar with the zane-era of the Laverda marque, its a typically Italian motorcycle manufacturer story.  In the mid-to-late 1980’s Lavera was a small motorcycle company that didn’t have the financial resources to do continuous development.   Instead, designs were evolutionary, focused on the parallel twins and triple engines the company was known for.  In 1992 a new series of sportbikes were designed and ready to launch when the the company hit yet another financial problem which this time proved un-resolvable with creditors.  The result was Laverda filed for bankruptcy in late 1992 but after a multi-year trip through the courts local businessman Francisco Tognon bought the marque and re-started production.  The purchase included the designs for the “new” bikes but this meant that when the Laverda relaunched in 1994/1995 their bikes designs were already about 3 years old.

Note: The motorcycles produced in this post bankruptcy period are often referred to as zane-era Laverdas.  This is due to the fact that while the prior production was at the old factory in Breganze, the new bikes were built in a new factory located less than 6 miles away in Zane Italy. The new lineup included a 650cc trellis framed bike known as the Ghost that was very similar to the Ducati Monster.  Another offering was a 650cc sportbike known simply enough as the 650 and a top shelf racer called the 650 formula that came with a new beam frame designed by Nico Baker.   Regardless of the model, the entire lineup came with the same basic engine (although the formula had upgraded cams and ecu mapping).    The reason for this was that Laverda had decided to follow the business model established by John Bloor’s reborn Triumph motorcycles; offer a series of model options all based around a common engine architecture.  This business model means that no single model can break the company (cough-Bimota VDue-cough) and the monies from these early bikes could keep the lights on and also go into the development of new designs.   The business model actually worked for a bit with updates to the 650 air cooled engine being implemented in 1996 and capacity bumped slightly to 668cc’s.  A new water cooled 750cc parallel twin engine was launched in in late 1997 and the modular philosophy continued with a standard bike known as the 750 Ghost, a street oriented sportbike known as the 750S and finally a “top shelf” 750cc Sportbike known as the Formula or 750SF.  All the new 750cc machines came wrapped up in lots of top shelf goodies including the beam frame design by Nico Baker, Paoli shocks, Marchesini wheels and lots of carbon fiber bits.  The 750SF/Formula edition got some extra bits including hotter cams, revised ECU mapping for better top end performance and termignoni exhausts as an option. 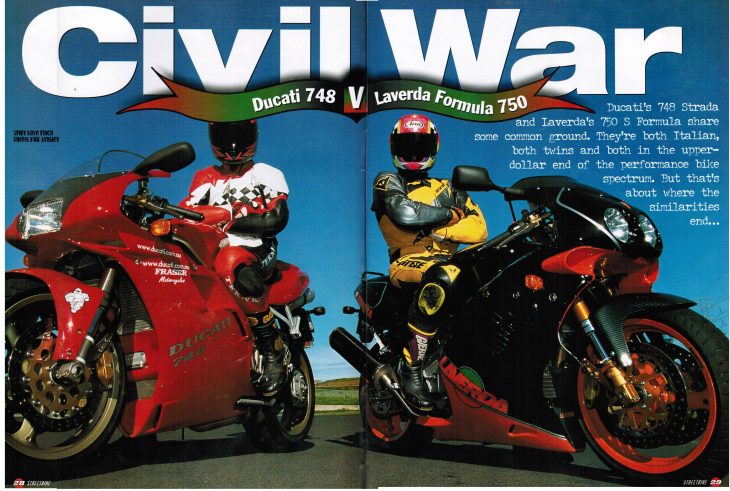 The 750 Laverda Formula was a solid competitor to the Ducati 748 of the era, down on power due to its older engine design but making up for it with better handling due to better suspension, braking and a neat letterbox fuel tank system that lowered the center of gravity of the bike as the fuel tank emptied.   Reviews were positive but not outstanding, with most comments saying the new 750cc model was equal to or slightly better than its Italian competition and a good step forward but not a world beater. Sadly, even with the positive reviews and moderate sales success, Laverda was still a small European maker trying to compete against the well-funded Japanese and a resurgent Ducati (which had just gotten a large influx of private equity investment).  Development of the long-awaiting 3 cylinder engine dragged on and by early 1999 Laverda was again struggling financially.  New financial partners came in with the condition that Franciso Tognon relinquish his majority control.  Tognon instead decided to exit the concern completely, selling his interest but somehow managed to take the rights for the design of the new triple engine with him (which became the new powerplant of the reborn Benelli Tornedo Tre 900) and within a year the entire Laverda concern was bankrupt yet again in 2000.   A brief flicker of hope for a rebirth occurred when Laverda was acquired by Aprilia in 2001 with Aprilia even showcasing a new Aprilia powered SFC model in 2003 but Aprilia soon ran into its own financial difficulties.  The entire Aprilia group, which also included Moto Guzzi, was soon acquired by the Piaggio Motors who quickly made the decision that Laverda was the weakest brand of the 3 and in 2004 the Laverda marque was mothballed. 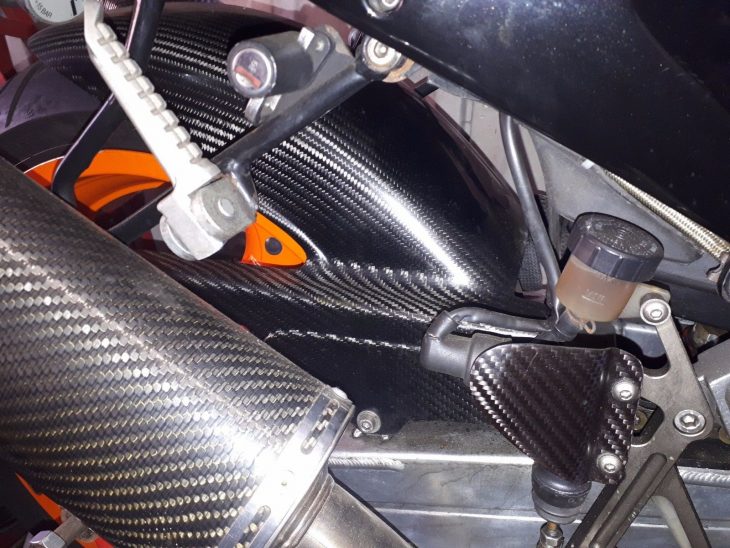 Ok, now that we have covered the history, what does all this mean to prospective collectors?   Its simple; the 1998-1999 750SF/ Formulas can be thought of as the last official development by Laverda, the model that contains all the final updates.  Bikes that represent the last of a marque are sometimes referred to as a “legacy” model and are usually a good investment opportunity, especially if they look as good as the Formula does. 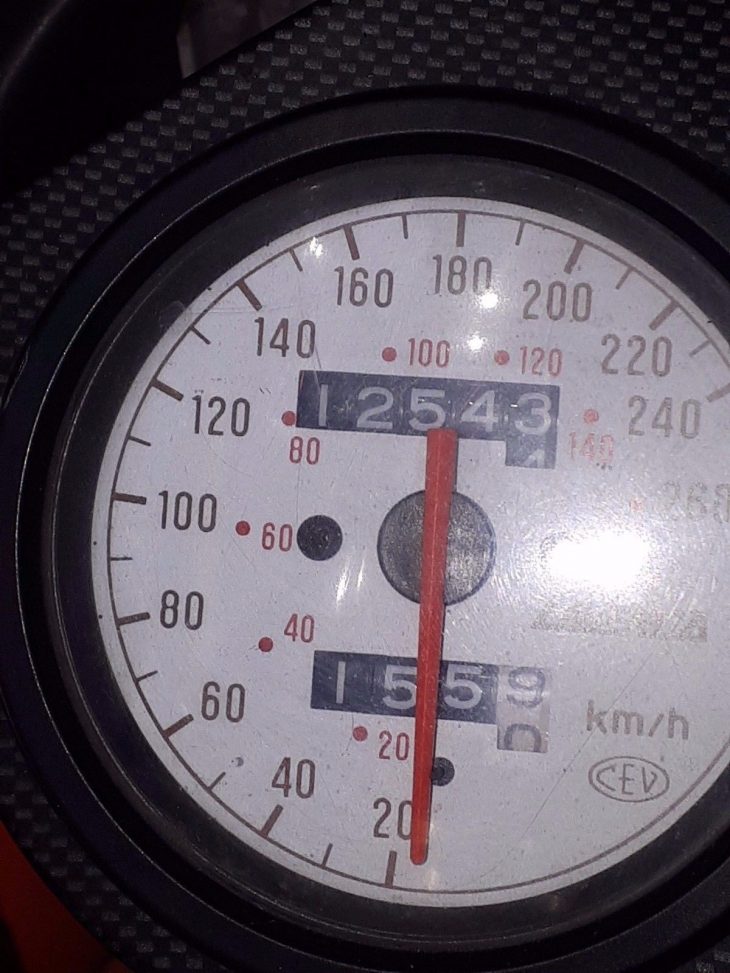 As for this particular Formula, mileage is approximately 12,500 kilometers but the seller indicates it hasn’t run in a few years so a reconditioning might be required.   Condition looks to be good with all the carbon bits in place and while I did notice that some bolts appearing to be non-OEM I don’t see any major damage.  The seller indicates it does come with the optional Termignoni exhaust system including the chip but probably the most important aspect of this bike is the fact that it comes equipped with an updated/Type 3 crank.  This is important because depending on how they were ridden and maintained, the zane-era Laverdas could experience lower bearing failures/oiling issues which could cause engine failure by 25,000 miles.   These problems were most pronounced in the earlier 650/668 air cooled engines and while the risk of this could be partially prevented by an update to a stainless oil filter system and regular maintenance, the company did redesign the crank for the later 1998 and 1999 models to further reduce the chances of this issue occurring.  The seller indicates this bike has been equipped with one of the updated factory cranks which is quite rare and an important value add for the bike. 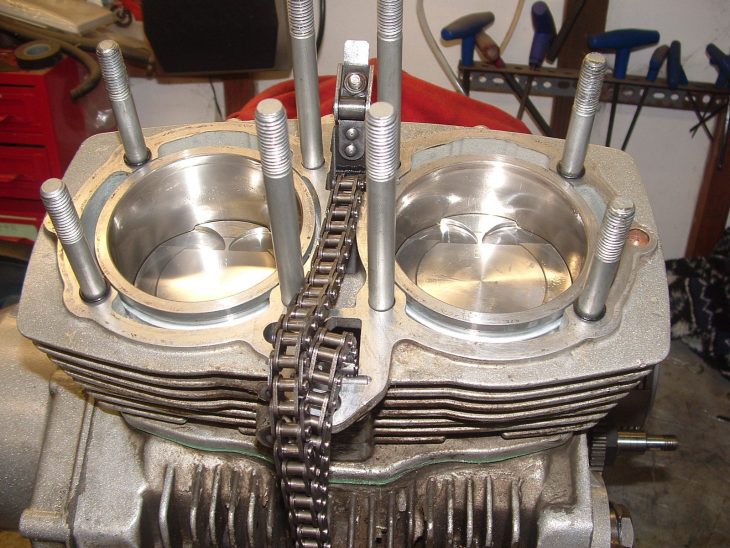 So now to the question – what’s this bit of turn-of-the-century-possibly-tempermental-carbon-fiber-accented-Italian goodness worth?   Well its a 1998 model which means it not quite as desired by collectors as the final edition formulas from 1999 that came in a truly beautiful blue/orange or silver/orange color scheme.   Parts will be a bit of concern, although several suppliers are available and there always seems to be a 750s model being broken on ebay.uk.com.  Givn that only an estimated 600 formula editions were built over the two year model run and the fact that this one has had the crank issue resolved, I would say this is a solid opportunity for a collector.

I would guess reserve somewhere around 4500 GBP/6000 USD.  Value won’t probably shoot up, it will be more of a slow gainer but its still a rare sportbike and probably a solid long term investment opportunity.

Addendum:  I feel its only fair to note that I personally have a zane-era laverda collection and make a bit of money on the side selling parts/doing restorations/helping people mechanic their issues.