I believe it was 1997 or 98, a good friend and I were in Italy livin’ “Large” (god bless the Lire vs Dollar back then) and we knew one of the guys at Bimota  so off  to Rimini we headed for a visit. The V-due , pronounced “Vee-Doo-A” (translation “V-2”), was just launched about a year prior. This was the bike that was going to pull Bimota out of debt and back on the map, hey “what could possible go wrong”  but did exactly the opposite. Following the tradition of the Tesi (another Bimota disaster) the V-due barely ran, had a power band from 9-10k rpm and still wouldn’t pass our EPA standards. With all the bad press  devoted 2-smokers looked the other way and wanted the bike, so at the time I imported about 7-8 of these and promptly sold them. I kept one for myself and rode it for a summer, mine actually ran “okay” but you had to keep changing spark plugs and one time the exhaust got so hot it started melting the tail section. Others were not as good, one seized because Bimota forgot to open the petcock for the oil injection tank and others were just plagued with horrible running problems. Being a fuel-injected 2 stroke was just plain tough and these bikes clearly needed more R+D. Now stacked with a warehouse of unsold V-due’s Bimota decided to sell some as  race bikes, then convert some to carb’s to try to move them but nothing worked. So back to my Italy story, guess what greets you when you first walk in to the Bimota factory….????  That’s right their two biggest failures that pretty much bankrupted the company, the V-Due and the Tesi. I’m serious I can’t make this kind of stuff up!

Located in Ohio on Craig’s List go here for the jump. 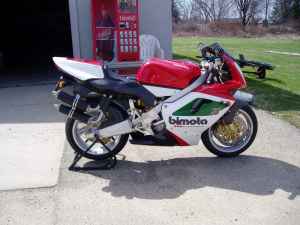 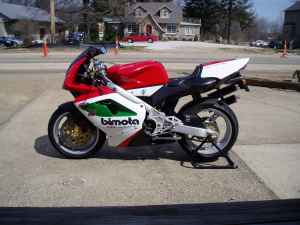 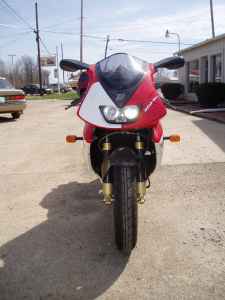 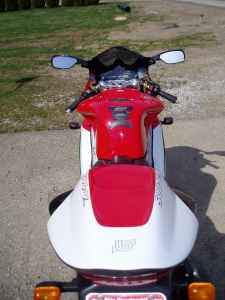 No price, no miles, and it would be nice to claim a year, WTF?? This has the decals of their “Evoluzione” version which was switched to carb’s but again, no indication from the owner. I still think these things are awesome and headed for collector status someday. If  it does have the carb conversion then it probably runs “okay”, the fuel-injected ones though will bring the bigger “collectable” money  in years to come. I sold these things new for about $21k and we’ve seen a few for sale in the $15-$19k range recently so I feel it’s worth whatever you want to pay to really have one. Start flashin’ some dead presidents in front of him!