After the TT1 and TT2, Ducati released the 750 F1.  This particular example appears to be a final 1986 model (the 750F1 was only produced in ’85 and ’86) because it has the Cagiva logos only on the tank and not the fairing which the earlier ’86 models did.  The ’85 models of course did not have any Cagiva logos. The Tri-Colore paint scheme in itself was rather good looking.  This will be one of only 50 produced in 1986 specifically for the US market.  This 750 produces 75 bhp at the crank in the ’86 model along with better handling due to the improved Forcelle Italia front fork. 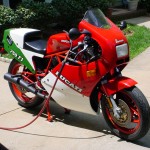 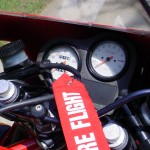 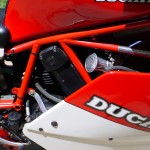 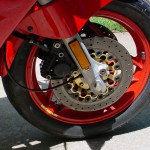 A 750F1 Montjuinch recently sold on eBay for just over $31000, and while this bike is not as rare, the asking price is in the right range for such a low mileage original example.  I do love the fact that the bike is so original which is hard to come by nowadays.