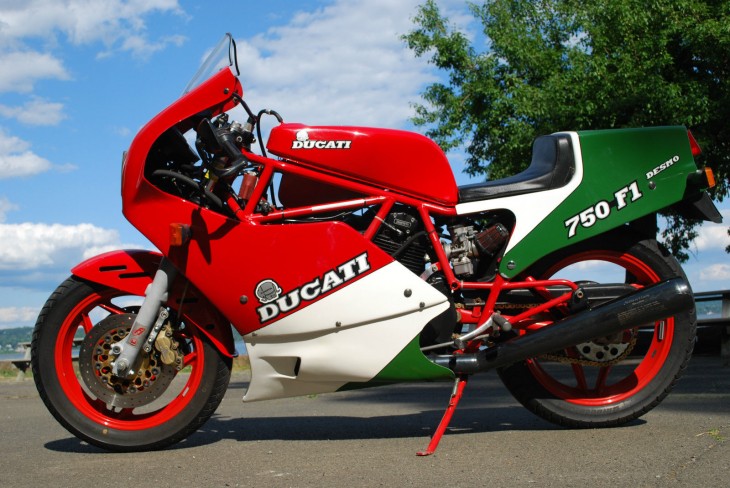 Marty has spotted another sweet, old world Ducati Superbike to share. This example really shines in the photos, wears an appropriate amount of patina, and is wonderfully described in the seller’s description, which I’ll let do the talking tonight. Cheers Marty! 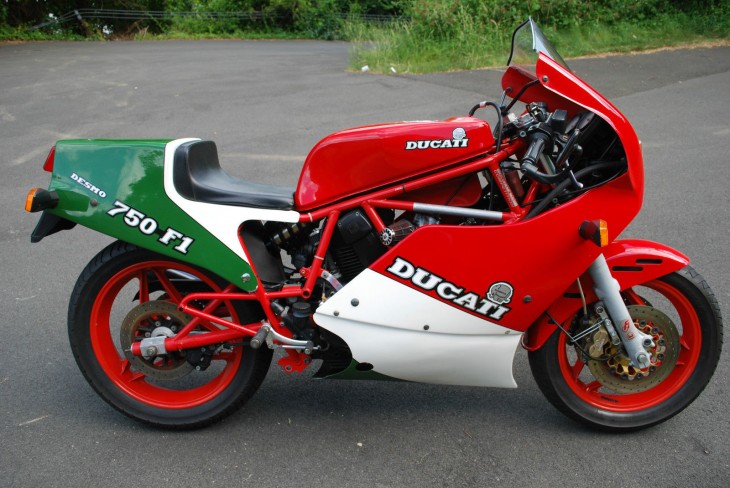 1986 Ducati 750 F1B. Tricolore. Highly collectible and rapidly increasing in value – evidenced by the recent Spring Las Vegas motorcycle auction where similar examples of this bike commanded prices in excess of $20,000. The Ducati F1A and F1B are true race replicas, street-going versions of the first of the “rubber band racers”, the four time world champion TT2. In 1985, the F1A was introduced then immediately followed with release of the F1B in 1986. In appearance the lines of the F1A and F1B bikes are almost identical, the most noted appointment differences being the F1B’s red wheels versus the F1A’s being gold and the Ducati F1B sports the new solid script Ducati logos adorned with the Cagiva elephant while the former F1A has a double outline script logo. This particular bike is an original, unmolested third owner example that has never seen the racetrack nor been laid down. This bike has been ridden, not abused, and shows the normal wear and tear of a 28 year old machine. You will note that the rear seat cowling has some checking and there are also various chips located all over the bike – As stated, it is USED and has been ridden but gently cared for. In the interest of full disclosure – A few of the OEM parts have been upgraded to avoid the minor technical glitches these bikes were known for, however, all are improvements and should be of interest to anyone buying this to ride it. Based on the current condition, it would continue to make a great rider, or, should you be more enthusiastic – it would also be a great rotisserie restoration project for someone wanting to transition this into a pristine vintage show bike.

NOTE: There have been a number of inquiries regarding the condition of the bike’s running condition – At present, the bike runs as it should considering the age with no apparent issues and all recent service work has been noted further in this listing, plus, as added evidence of this we have included recent video of the bike both running and being driven – however, so as to best serve the best interest of the BUYER and to support full disclosure, should any prospective BUYER find need to inspect the bike prior to bidding, please contact us and we will do our best to try to accommodate the necessary arrangements. So as not to complicate this – Let me add this comment, please do not bid if any of the information in this listing seems unreasonable to you or if you in any way doubt the integrity of this listing – At the end of the day, you will find our family likes doing business on a handshake and dealing with people of integrity, so that said, contact us with any questions/concerns and we will work them out.

This bike running. Skip to :35 for the revs: