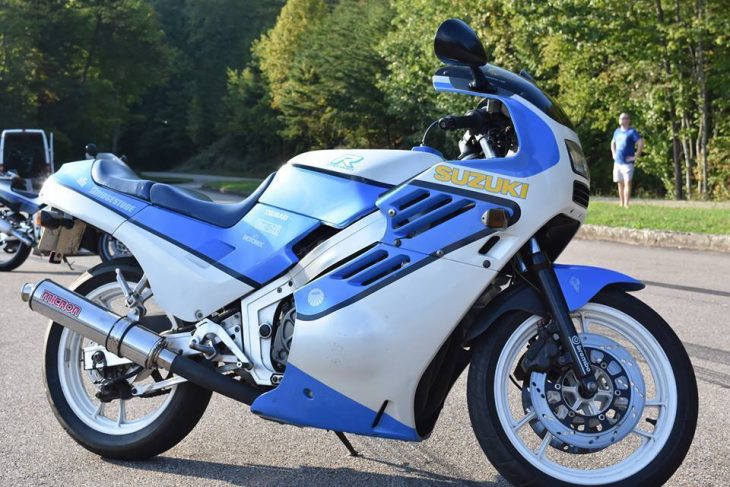 Most times, even if their models share no significant components, motorcycle manufacturers go to great lengths to make sure their bikes all share a strong familial resemblance. In fact, the most recent GSX-R600 and 750 are virtually identical and appear to share their frames and body panels, with only their engine displacements, graphic treatments, and tachometer faces to differentiate them. That makes particular sense at the moment, since the GSX-R750 has pretty much been in a class of one since the the ascendance of the 1000cc machines and developing a bike that shared most of its important components with another mass-produced model was virtually a requirement. Ironically, with the seeming demise of the 600 supersport class, I wonder if it won’t be the 750 that has the last laugh… In any event, the designers of the GK71 version of the Suzuki GSX-R400 clearly didn’t get that memo. 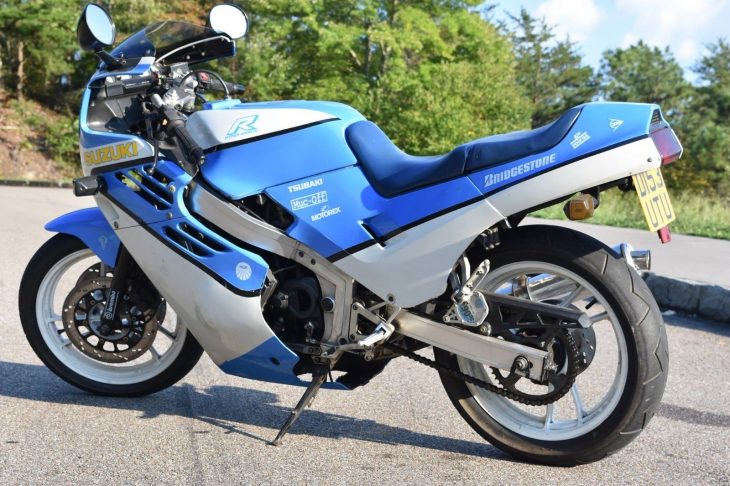 Taking a look at the bigger 750 and 1100 versions of the GSX-R, this 400 looks markedly different. The tail is sleeker, with a pronounced taper when viewed from the rear, the fairing has several rows of gills, like a small, primitive shark, a single headlight in place of its bigger siblings’ round units, and an actual dash, instead of a foam instrument surround. All-in-all, it’s very obviously a Suzuki, but looks very little like the larger GSX-R models. 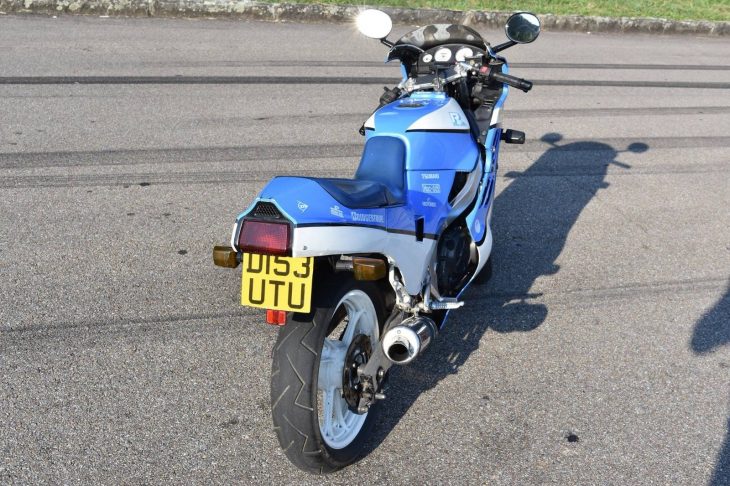 The seller refers to this as a 1987 and a shot of the title confirms this but, supposedly, the 1987 had twin headlamps and gold brake calipers, so this may in fact be a 1986 model year bike, since that appears to have been the only year with the rectangular headlamp. The exhaust pipe would also have more of a perforated style shroud like the 750 and 1100, but the aftermarket Micron fitted here makes it hard to say for sure. Regardless, you’re looking at a 398cc inline four making 60hp and backed by a six-speed gearbox, hung in an aluminum twin-spar frame with a weight of 337lbs dry. 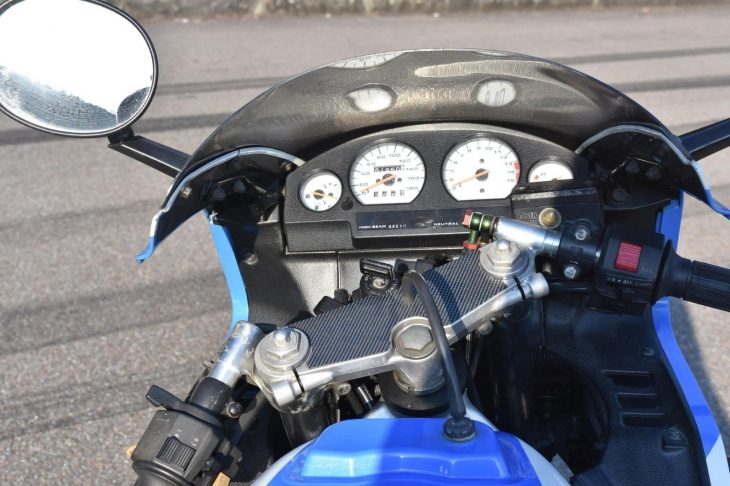 Here we have a rare, well maintained, and super quick Suzuki GK71 GSX-R400. This is a clean machine sporting corrosion free aluminum frame/swingarm, stock fairings, and only minor imperfections. It sounds great, and pulls linearly all the way up to redline. I had great fun running this bike over the mountain during last year’s TT races on the Isle of Man. It ran faultlessly, and was the impetus of many a conversation with other race fans. 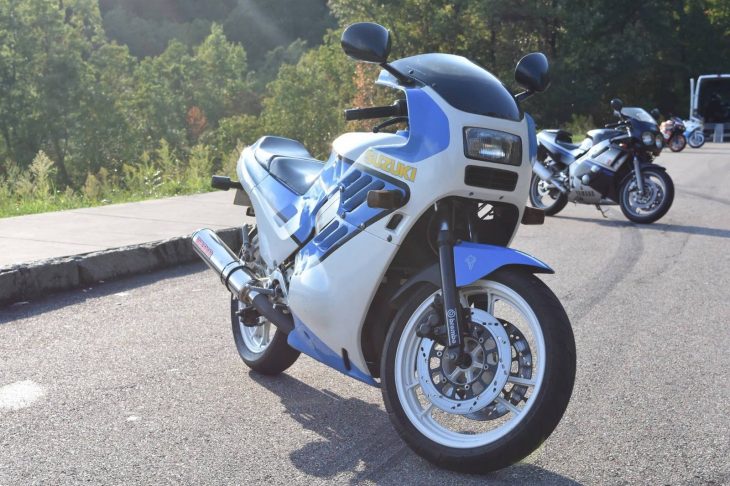 The GSX-R400 was rarely seen outside Japan, and there’s been little interest in the bike for the most part, as it wasn’t nearly as exotic as the Honda NC30, as refined as the CBR400, or as agile and affordable as the FZR400. It was a bit crude in comparison, but was still a very competent, relatively sophisticated machine, and a slight lack of performance compared to rivals shouldn’t discourage anyone at this point. 30,000 miles is on the high end for a collectible sportbike, but assuming it’s been properly maintained and cared for, that wouldn’t put me off too much assuming the price was right. And considering the bidding is up a bit over $1,500 I think you’d have a hard time finding something else that offers this combination of rarity and unintimidating performance. 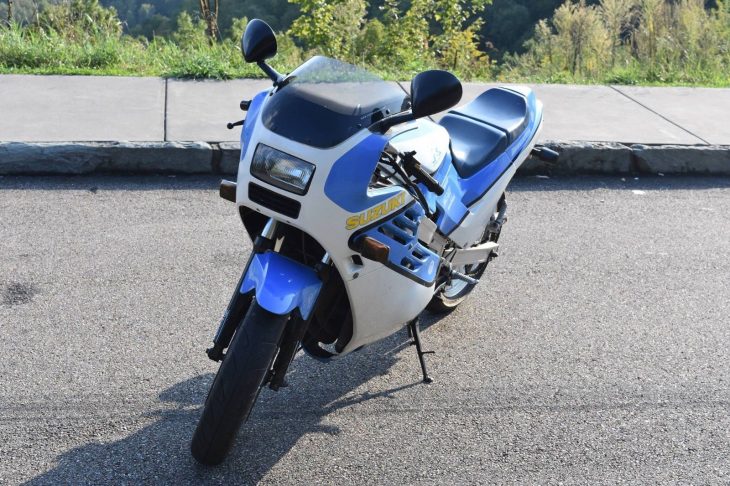 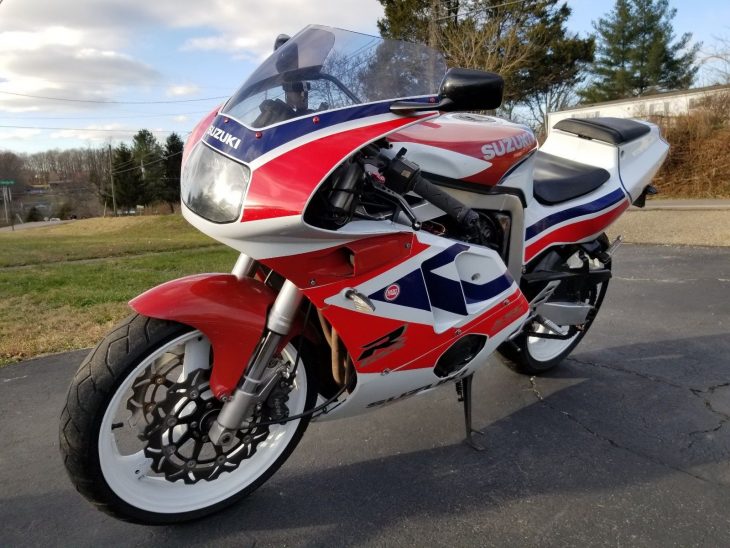 I ran into a nice young rider the other weekend while I was eyeing his flat grey EBR 1190RX. We talked about the bike and all its neato Buell-y features, and he asked me what I was riding, so I introduced him to my Daytona, which also happens to be grey… “Aren’t you a little big for that?” He asked.  Obvious “that’s what she said” jokes aside, it highlighted a common misconception, at least here in the USA: smaller sportbikes are “learner” machines, and serious riders should move up to a “real” bike as soon as possible. Of course, bikes like today’s Suzuki GSX-R400 are an argument that maybe smaller is just fine, and that there’s plenty of fun to be had on a motorcycle that offers serious handling, but only modest straight-line performance. 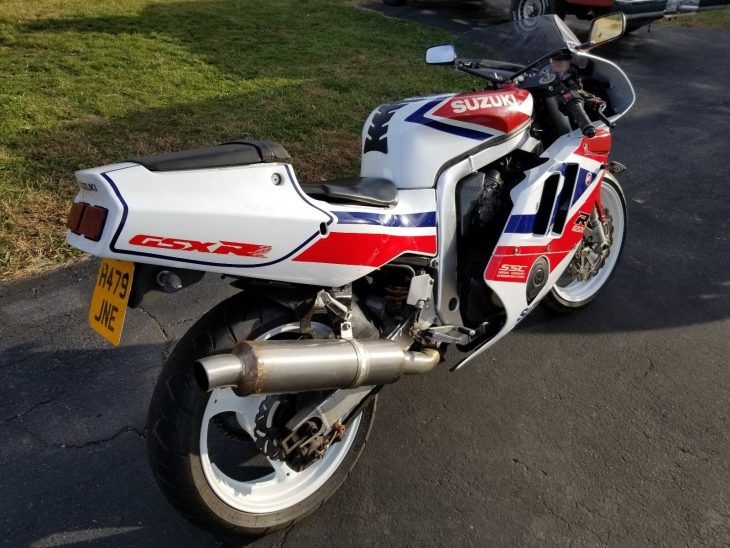 Strict licensing and taxes on displacement mean that bigger bikes can be flat out impossible in many overseas markets, no matter your experience or skill. In those places it was often the 400cc class that was hotly contested throughout the late 80s and early 90s: witness the fact that the FZR600 was the lowest-spec bike of Yamaha’s sportbike range with a glaring, low-tech difference: it used a relatively heavy steel frame instead of a lighter aluminum unit as seen on the 400cc and 1000cc models. In fact, the very first GSX-R was actually a 400cc model, and Suzuki applied the lessons learned to their smash-hit GSX-R750, although many aren’t aware that the earlier bike even existed. 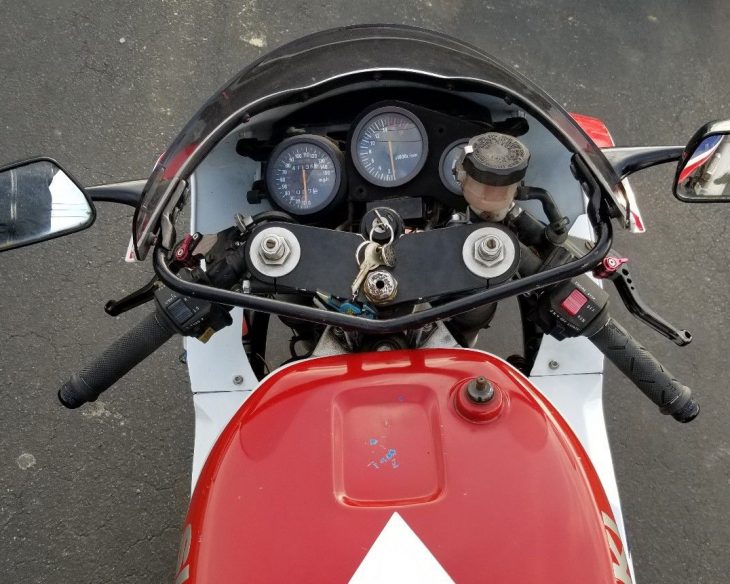 The third iteration of the evergreen Gixxer is also currently the least desirable, and this GSX-R400 is styled to match its bigger siblings. Not only does this generation still exist in that nether region between classic and modern, the bikes were generally heavier than the bikes they followed, with less performance. The Gixxer was peakier and a bit cruder than competitors like the CBR400, and as a result it was a bit of an also-ran, although it should still offer plenty of bang for your buck. Weight for this version of the GSX-R400 was 367lbs dry and the little 398cc inline four made 59hp at 12,500rpm. 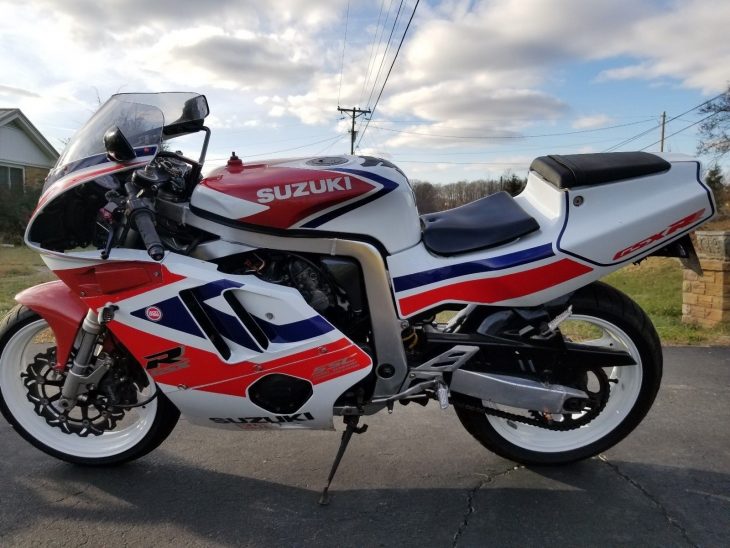 From the original eBay listing: 1991 Suzuki GSX-R400 for Sale

Up for No Reserve auction we have a 1991 Suzuki GK76 GSX-R400. This bike sports slick OEM graphics, and is quite a good looking machine. It has recently been tagged and registered in Tennessee and is ready for the road. On the performance front I feel the carbs would benefit from a good cleaning. With that said, the bike starts up easily enough, idles, and runs right on up to redline. These are rather difficult to come by, and this one will make a nice addition to someone’s collection. 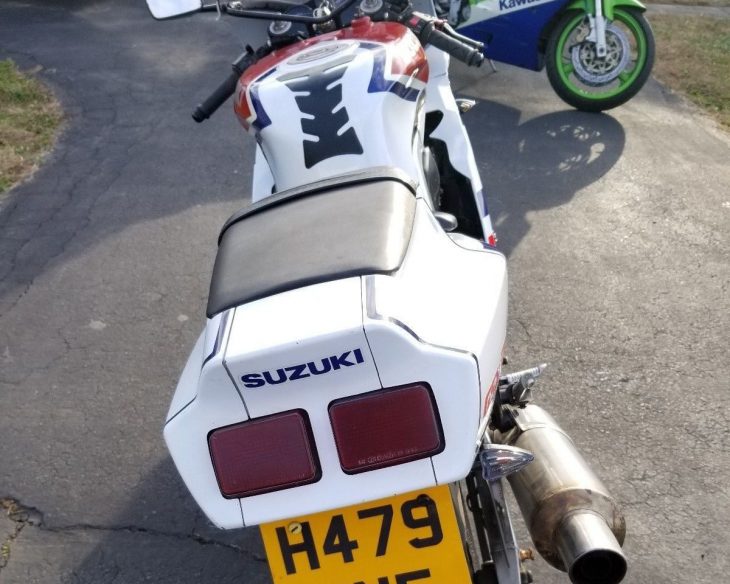 Considering how popular Suzuki’s sportbikes have been worldwide, it’s surprising we haven’t seen more of these up for sale here in the US, now that they can be legally imported. They certainly weren’t the the best 400s but, being a Suzuki, plenty were sold. The seller includes a nice little video of the bike being zapped up and down a backroad, and it’s nice to see that the bike is a solid runner, because it’s not in showroom-perfect condition: aside from some scratches and plastic bits that have naturally discolored with age, the end can looks to be in pretty sorry shape and the non-standard turn signals are small and unobtrusive, but their fake-y “carbon” finish isn’t very tasteful and originals might be difficult to source, depending on whether or not they’re exclusive to this model… But all of that can be overlooked if the price is right, and with just two days left on the auction, that price is a mere $2,225 which could make it a screaming deal of a little screamer, if the bidding stays low. 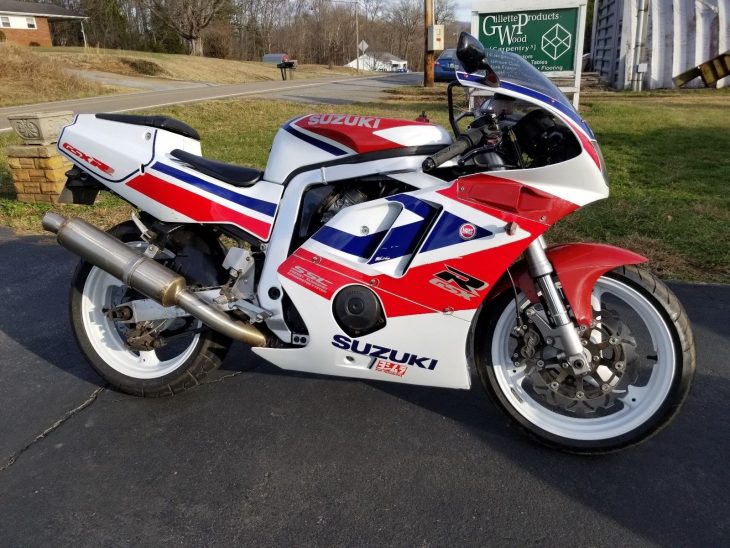 Located in Jacsonville, North Carolina is a 1992 Suzuki GSX-R400R.  This bike doesn’t have a title, it needs the carbs cleaned, and needs the tail plastic.  However, it has some good features:  Only 8k miles, Yoshimura exhaust, and the asking price is only $1,800.  This could be a very good bike for the right buyer.  See the Craigslist ad here. 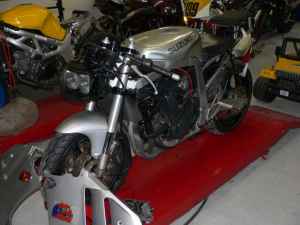 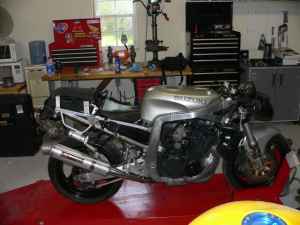 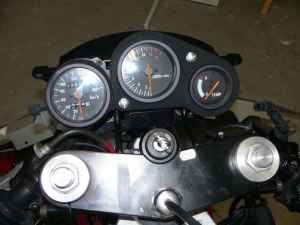 Also, see all the pictures here. 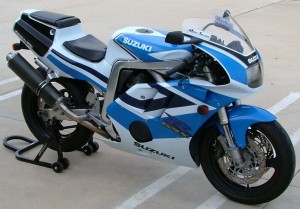 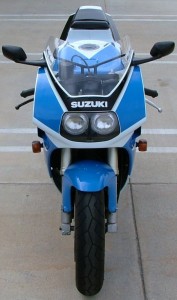