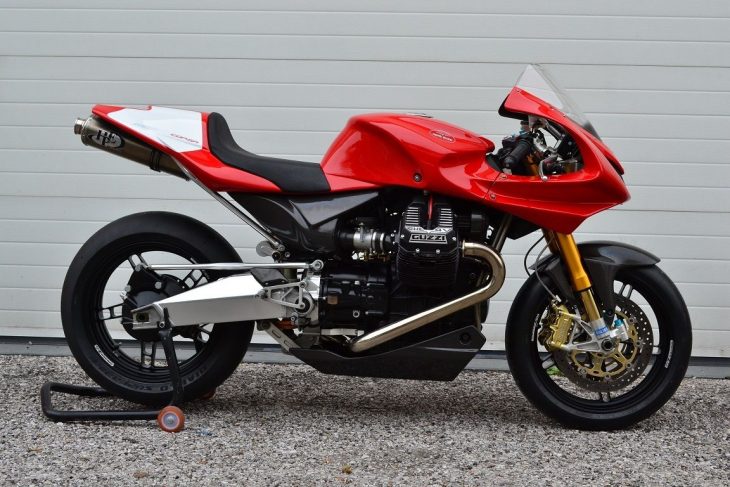 Moto Guzzi is often thought as being a sort of italian Harley Davidson, probably because  both manufacturers have a defining configuration that has long formed the basis of its lineup and neither is really thought of as a sportbike manufacturer.  Moto Guzzi has even used this portrayal in its own marketing, telling would-be owners that a Moto Guzzi is a motorcycle for traditionalists/for people who think the journey is more important that the speed at which they get there.  But back in 2002 Moto Guzzi had just opened a new design center and the company tasked their designers to come up with new designs around existing hardware.  A team of designers led by Giuseppe Ghezzi & Bruni Saturno took up the task and the MGS-01 concept was the result, a V-twin powered sportbike that was unlike anything the company had produced previously or since. 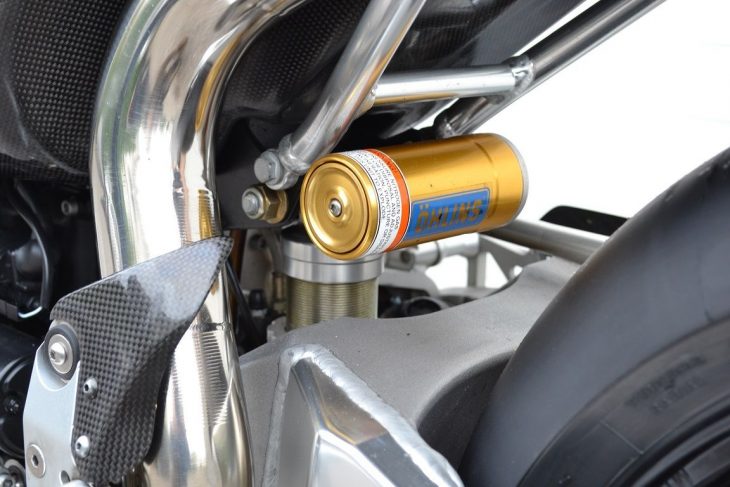 The MGS-01, which stands for Moto Guzzi Sport number 1, was powered by a 1200+cc 8V engine featuring chrome cylinder walls (!!!!), cosworth triple ring racing pistons, nimonic valves and a special lubrication system that sprayed oil under the pistons.  The MGS-01 would also come with an all new six-speed gearbox with reinforced clutch,  an aluminium swingarm, Ohlins for the rear shock, Brembo brakes and OZ aluminium wheels.  All in all, a huge departure from the typical Guzzi offering of the time.

The embedded video below gives you an idea of what this big red beasty looks and sounds like (skip to the 1:50 mark for just the sound).

Sounds like it can’t miss, right?  Sadly, no. The MGS-01 had the misfortune of arriving right when parent company Aprilia was going through some serious financial troubles.  It took until 2004 for the first MGS-01 corsa editions to actually roll off the production line and when the Aprilia group was sold to to Piaggo in 2005 the new owners quickly pulled the plug on what they determined to be an unprofitable “halo” model.  Production numbers are under some dispute but most agree no more than 150 were produced, with the final editions going out the factory door as 2006 models.

For anyone who is interested in reading a very good writeup of the entire MGS-01 effort, click here. 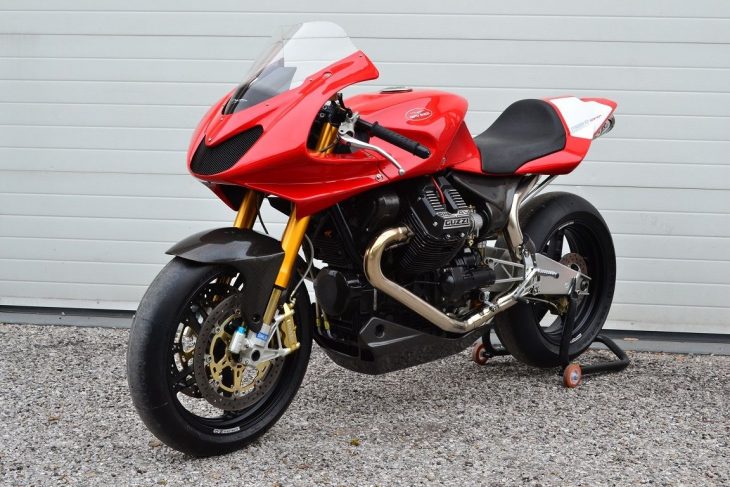 As for this particular MGS-01, mileage is 2460 so its barely broken in.  The current seller does not provide any detailed service info in the Ebay auction so we are forced to rely on the pics which there are a good quantity and quality of but ..uh oh…one of the pictures shows a receipt for a repaired valve and some engine work.  The receipt does indicates mileage of 0 at the time so perhaps it was a factory recall but it it is a concern along with why the paint appears to be flaking off the engine case, the fluid color and what appears to be some sort of fluid on the tires. 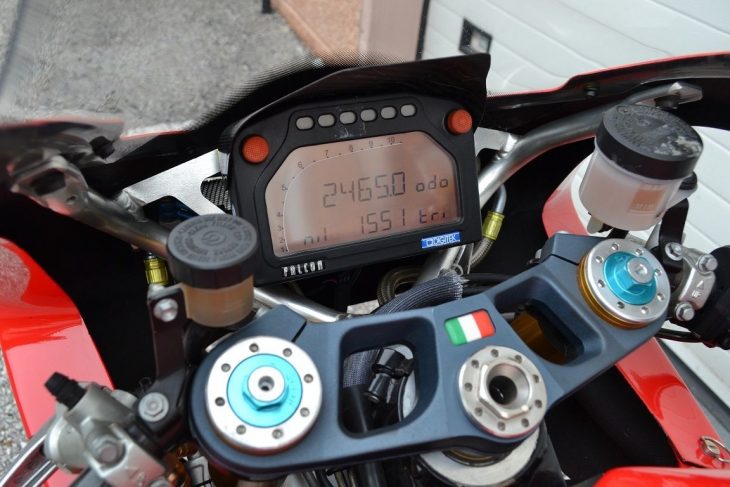 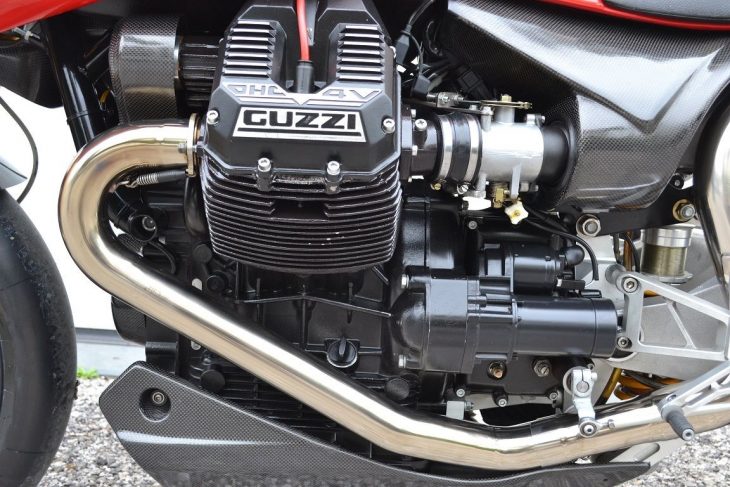 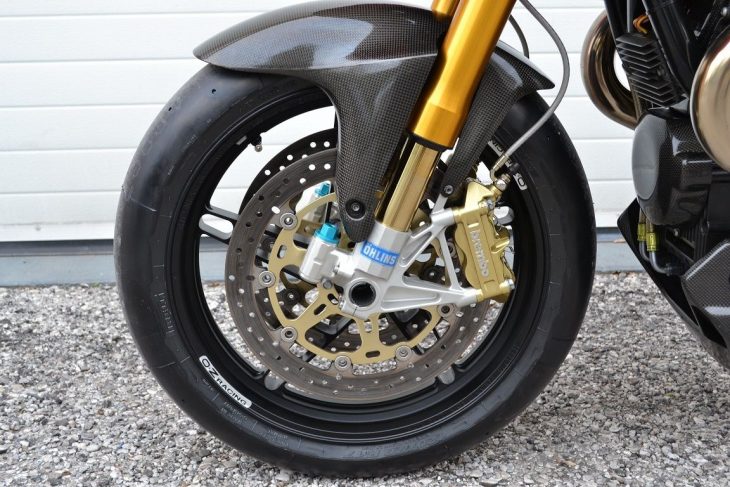 So should you consider this particular MGS-01?  Well on the negative side of the ledger is the previously mentioned valve service receipt and the fact that the MGS-01 was a one-off model that marked the end of production for 8V Guzzi racing engines which means that service and parts would be an ongoing concern.   I suppose if you are really interested you could contact a dealership about parts availability and also the current seller to inquire about the valve service (or try to contact the owner who had the valve work done).   Location is also an issue unless you are willing to pay for import.

On the positive side of the ledger the M GS-01 is probably the ultimate expression of Guzzi’s being used as modern day racers….you can think of it as the ultimate Dr. John Whittner Daytona.  And given its limited production run of 150 units the MGS-01 seems destined to be a rare sportbike that will appreciate in value over time.

As for price, from what I have been able to find OEM price from a MGS-01 was about $37,000 but the few of these we have had on RSBFS have been priced at at least that.  I don’t think I can give an estimate on this one due to the service history concerns but I will say that I wouldn’t be surprised to see it go for right around the OEM price.