NOTE:  This bike probably belongs over on the RSBFS sister website, Classic Sportbikes for Sale.  Also, its an eBay classified ad, not an auction.  But its so amazing that I just I had to ask Dan to post it here -Marty

Imagine for a moment you are at a local bike night/meet up. Probably some classic and recent bikes are in attendance, perhaps there is even some Italian exotica.  And then this pulled up.  No doubt your reaction will be the same as mine; a sudden disconnect between your brain and your mouth causing you to stutter “W..W…W”  as you trying to form phrases such as “Whats THAT?!”, “Wow!”, “Whoa!”, “Wicked!”, and finally “Want IT!!!!” 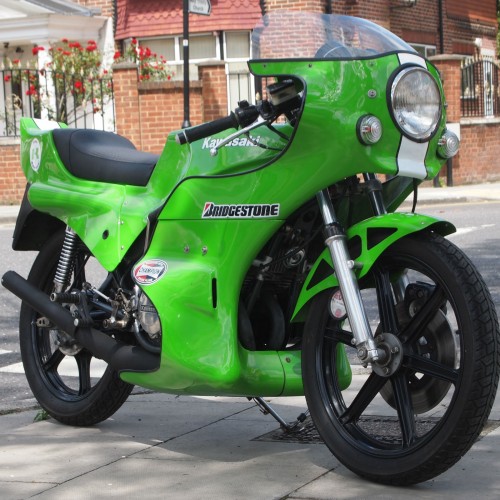 IT is a 1979 Kawasaki KH400 equipped with a Dyson superbody kit.  I will admit I had to spend some time on the web to learn about this bike but from what I have been able to find out, the Kawasaki KH400 was a bonkers bike to start with; engines were air-cooled, three-cylinder, two-strokes.  Can you just imagine what that would sound like? 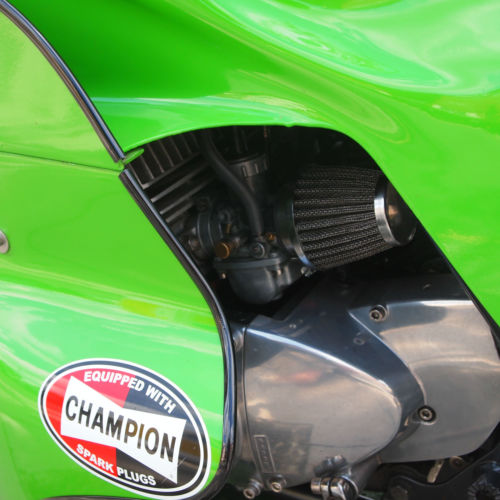 And to top that off  there is the Dyson bodywork.   Back in the mid 70’s Designers Ian and Tony Dyson began designing and selling racing-style-but-street-legal fairing/bodywork kits, which they preferred to call “Superbodies”.  The most common and famous of these was a kit built for the middle weight Kawasaki triples. 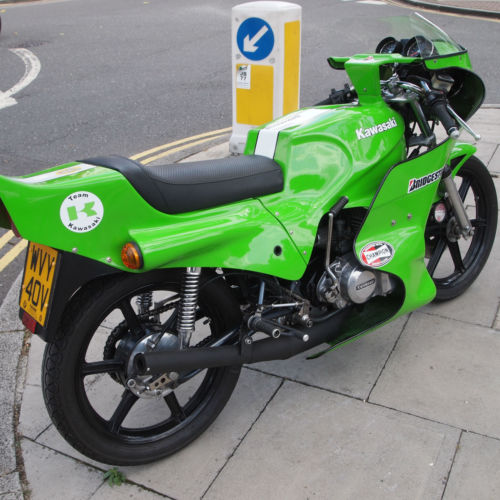 Now before you begin checking your bank balance, take a few deep breaths and consider the following;  the bike is located in the UK, which for those of us here in the US would mean paperwork and fees.   Also, its difficult to find any sales history for bikes like this so a realistic price is tough to come up with but given its outstanding condition, rarity of the bodywork kit and low indicated miles/kilometers there is probably not going to be much negotiating room with the dealer who is selling it.

But can’t you just image the fun it would be to be the one who rides up with this awesomely green three cylinder two stroke making the noises a real motorcycle makes and sees all the jaws drop?  I know I can.