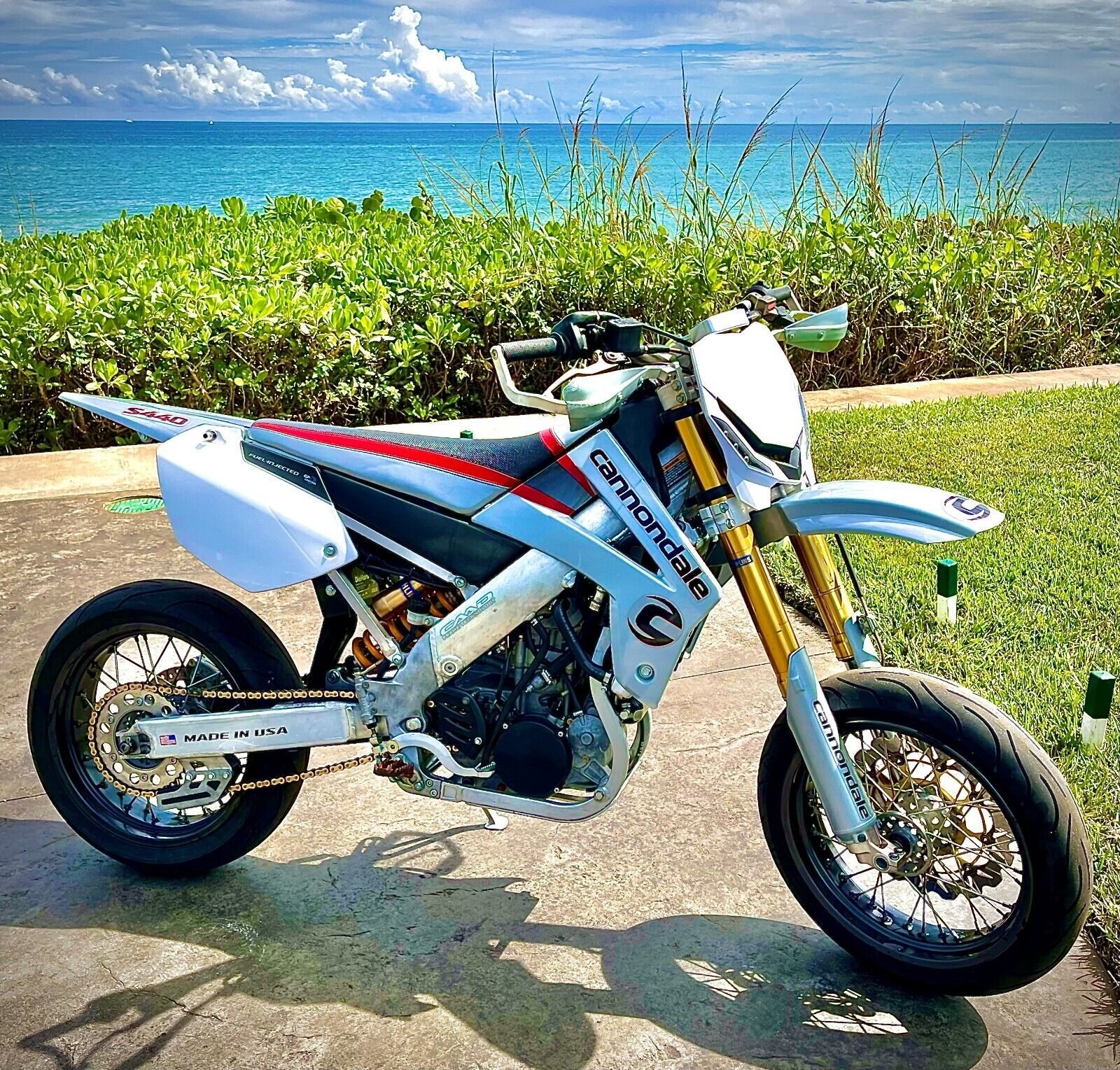 I’m going to guess we’re all in for a bit of a lesson here. Cannondale? Motorcycle? My only initial objection to this is the fact that I really don’t like bicyclists… Especially road bikers who occupy a lane/shoulder and idolize a dude with one nut and a few stripped titles. Move out of the way because there’s a better way to get around on two wheels. Bicyclists also have zero humor. I once summited a Vietnamese mountain peak on a CRF150 and ran into a couple on holiday who had had ridden their bicycles to the top (with a chase van behind in case they got tired). I tried explain to them how the the holy trinity of air, fuel, and spark can go BOOM but got nothing. I think they were European…

The RSBFS audience probably feels that this one hangs on to the niche by the skin of it’s teeth but I disagree and there’s far too much going on here to ignore. For the naysayers, please watch the the extensive S1GP Championships on Youtube and if you’re not convinced these are sport bikes you probably still believe the Earth is round… 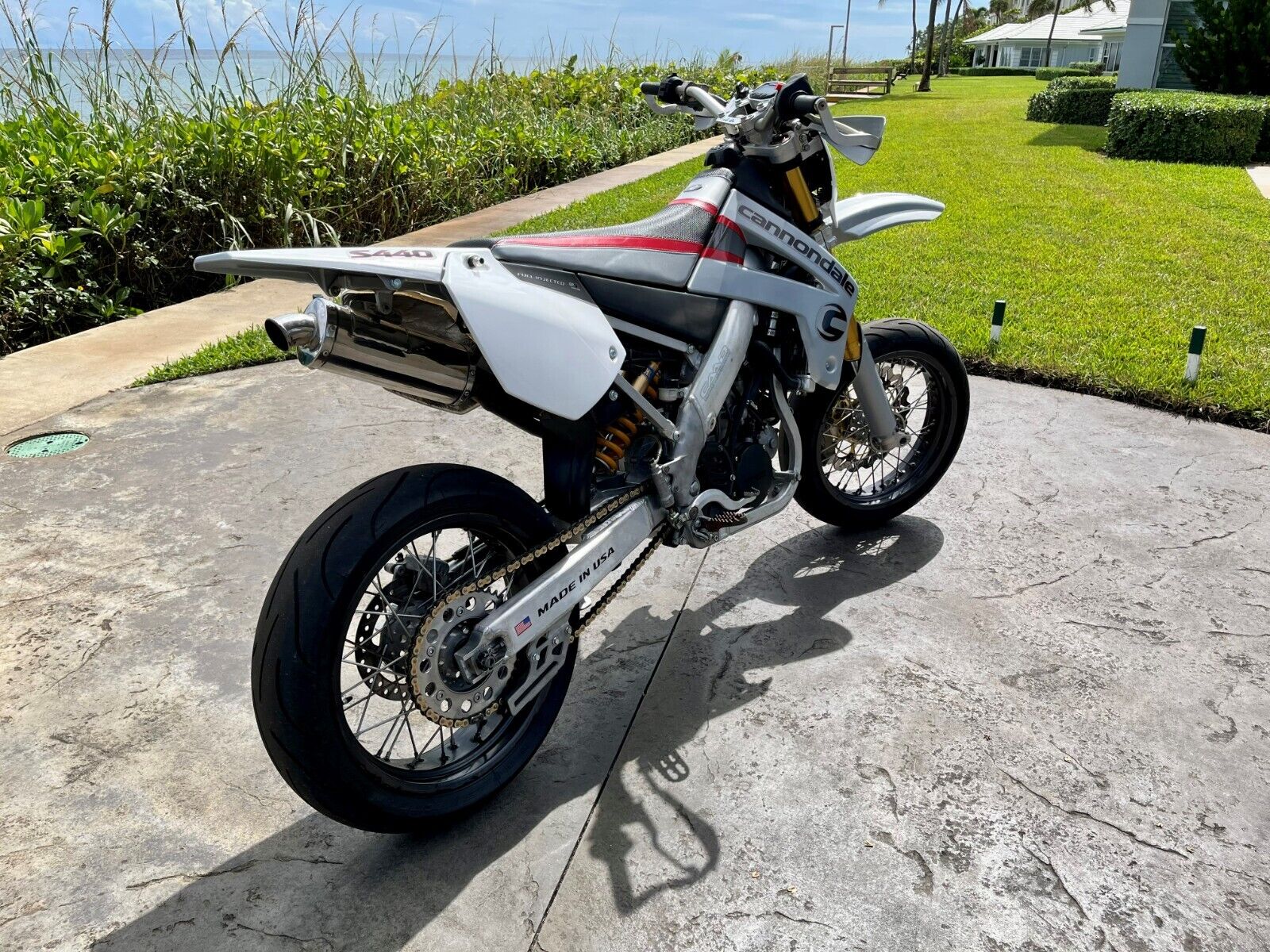 Origins stories are hard to come by for motorcycles. Google is good but it doesn’t have everything about everything. I’m sure word got around paddocks and magazines back in the day but as I’m sitting at my keyboard, my eyes and ears aren’t long enough to read those pages or hear those stories. As any responsible member of the automotive journalism community would do, I shall speculate:

Joe Montgomery, Jim Catrabone, and Ron Davis all founded Cannondale in 1973 as avid mountain bikers. We must give all credit there; It has become a super successful and innovative company. At some point along the way some Chad dirt biker must’ve made a comment or given a look that rubbed the folks at Cannondale the wrong way. The dirt bikers were probably looking down on the “lame” cyclist population and stealing all the girls which left the cyclists angry. Or Cannondale wanted a share of a massive dirt bike market and figured they knew enough about aluminum to make things work. I prefer the former. One thing I can tell you about the origin story is that the S440 started as dirt bike and Cannondale eventually opted to make 52 street or “S” versions. These came with different gearing, Brembos, and a sumo wheel and tire combo. 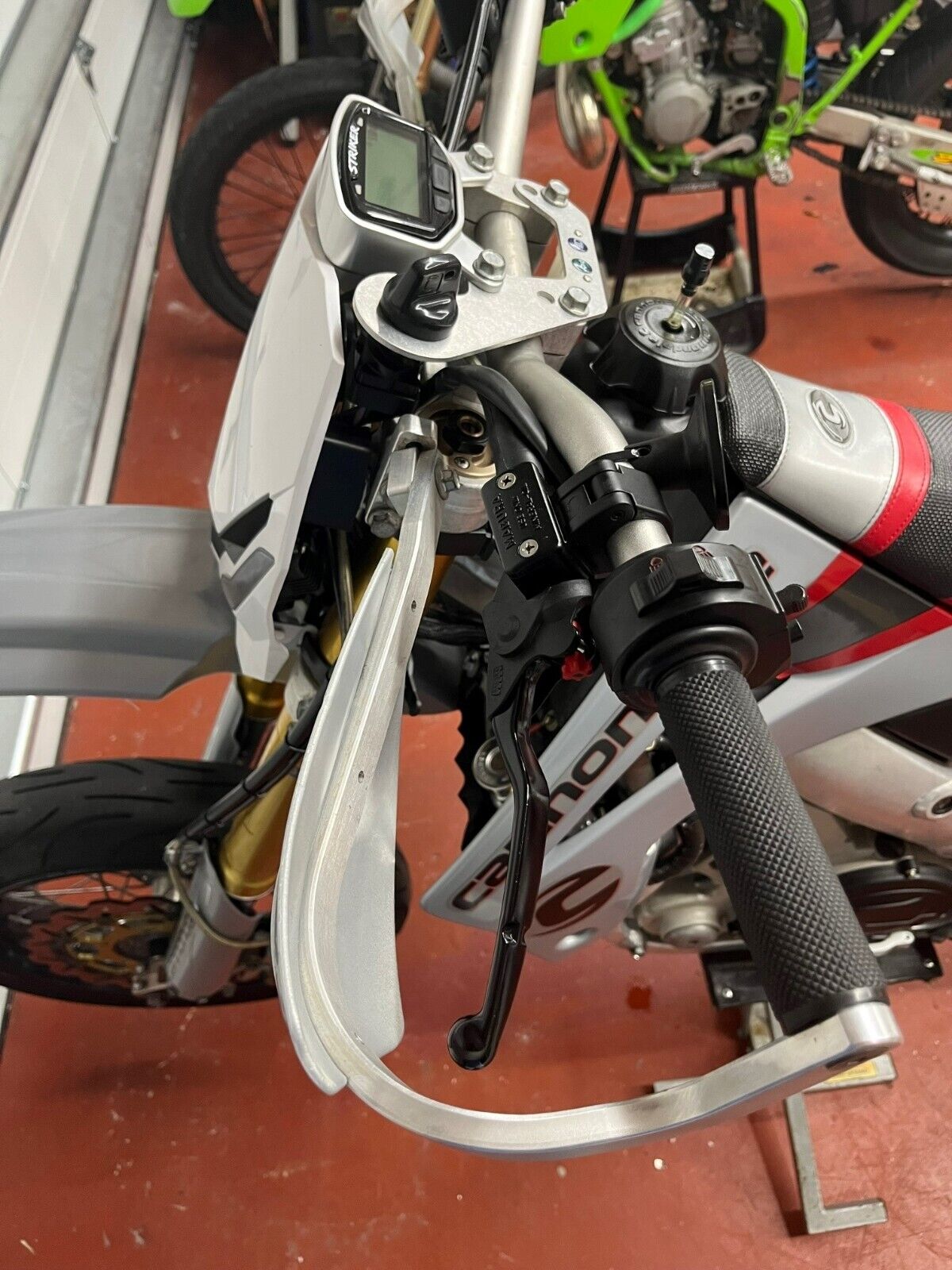 The S440 and X440 had a few new innovations when it came out. This isn’t uncommon for new market entrants. Buell, Ghezzi-Brian, and Bimota are just a few examples but they all entered a competitive market and brought new ideas to the table. It’s a lot easier to get into a creative flow when you don’t have to fend off a bean counter on your way to take a piss. Anyways, aside from the wide variety of high-spec parts tacked on to the bike the main novelty was really the engine which was a new in-house design. Reliability, power, and refinement all ended up being off the mark and you have to make sure you at least have either reliability or power to build trust (or hope) with a customer base. The novel part of the powertrain was the orientation of the engine. Traditionally, MX bikes keep the filter/airbox on the real of the cylinder to avoid dirt inhalation and the exhaust up front. Cannondale opted to stash the filter behind the front number plate where it was supposed to “ram” the air but ultimately struggled to breathe. The American outfit eventually had to add a secondary filter under the tank which complicated a simple filter cleaning job. In theory the exhaust could be shorter and the all the routing would be simpler. However, a short exhaust proved difficult to tune. Yamaha ended up adopting this design but extended the exhaust with a couple turns in order to get adequate power from the system. An electric start was also part of the package but struggled to start the bike after it hit operating temperatures. That would have been harmless except a kickstarter was not part of the package.

Weight isn’t unwelcome on every bike. There are stability and tuning advantages depending on your riding application. A lack of high-level riding experience on dirt bikes was probably missing during the design phase because the 440 was 30-40 lbs heavier than the competition. We all learn to live with a few extra pounds but we all also know that going from 175 lbs to 200 lbs is a lot tougher to stomach than going from 200 lbs to 225 lbs. Riders and critics have other faults with Cannondale’s experiment but I’ll stop ragging now. I’ve never been one to kick a horse while it’s dead. 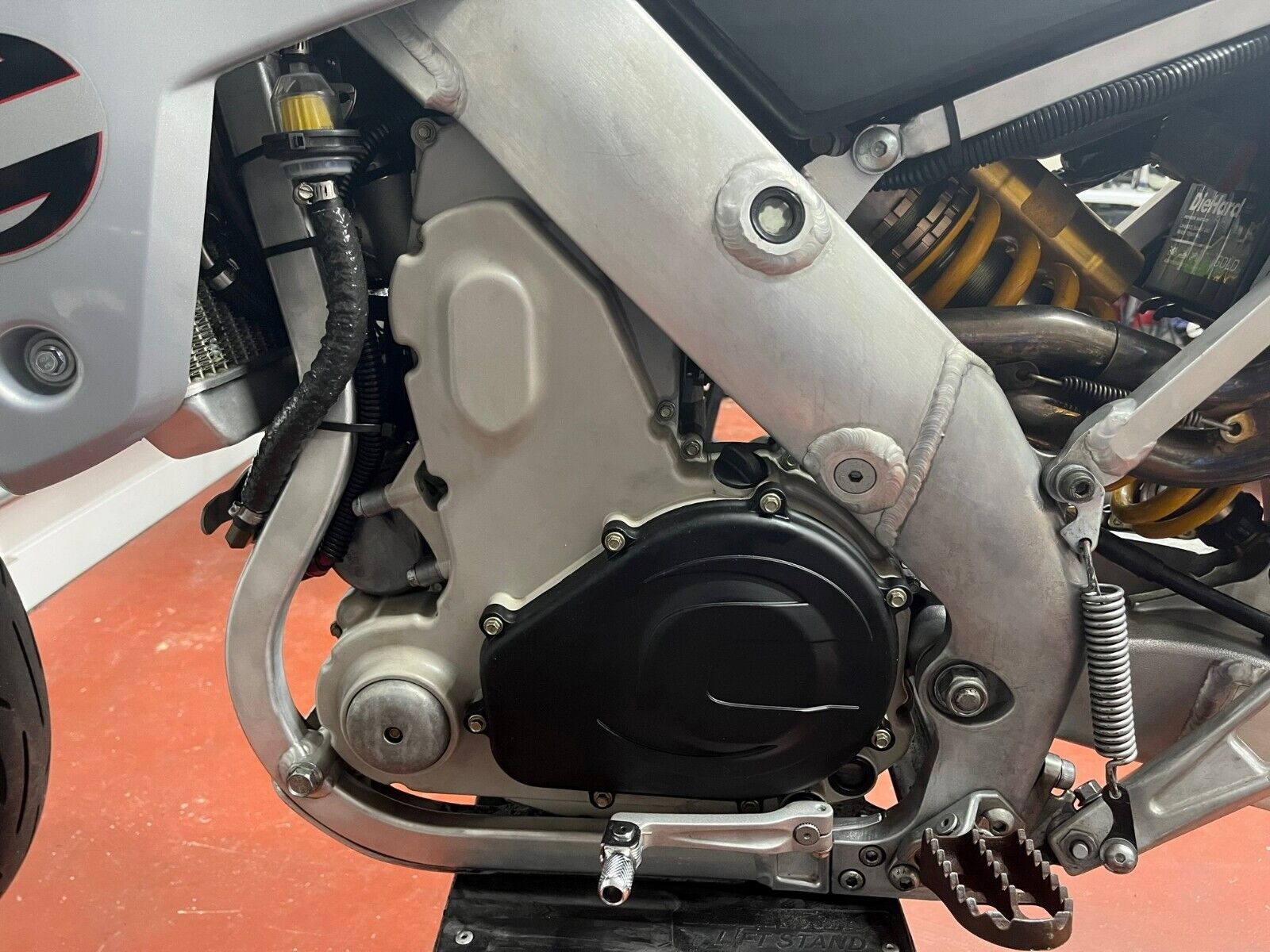 This specific bike seems to have been well taken care of by the seller. A factory odometer didn’t make it’s way onto the 440 so it’s unsure of exactly how many mi or hours are on the bike but this seller has just gotten the motor fully rebuilt by a Cannondale specialist. Any and all known engine reliability upgrades were also completed prior to the seller’s acquisition. The chassis and plastics all look fairly clean so I’m going to guess this thing hasn’t done Goldwing miles or been laid down. Check out the listing here to see a full list of mods and upgrades completed by the seller. A running video can be also be seen here on Youtube.

This summer I discovered this motorcycle in the window of a local bicycle shop.  The owner said he bought it 10 years ago to put in the window of his bicycle shop.  If you search youtube for the term “Deerfield Beach Cannondale S 440” you will find a video he posted from 2012 of the bike at his shop.  If you want to learn more take a look at the facebook groups or contact the retailers for parts on these bikes who are aware of this bike/history.
After buying it this summer and consulting with a Cannondale expert I discovered there are known engine updates that typically need to be made.  I sent the engine to Blackwidow and they informed me the updates had already been done there in 2012.  Since they had the engine and it had been sitting for 10+ years I had them rebuild everything new piston to crank shaft and port the head.  The ECU map they provided they said should be around 50whp but I have not verified that on a dyno.  Invoice is attached.

I don’t want this post or my opinion of this bike to be misunderstood. An American dirt bike that saw production and time on dirt tracks around the country is nothing to be scoffed at. It’s a hell of a story to be able to tell your grandkids at the least which is probably worth more than profit. I’m not saying these guys pioneered the segment or permanently altered it’s course but rather the criticism was too harsh and expectations too high. There must be just a handful of “perfect” first generation designs let alone from new companies. On the bright side, it seems the enthusiasm was there for an American dirt bike to rival the Japanese. Pride in riding American machinery has never been in short supply stateside and this bike even won a “Bike of the Year” award before it was released. This award had no doubt played a part in building up the high expectations and subsequent let down. The performance let down, lack of cash flow, and tarnished brand weighed on the company and ultimately led to the sale of the motorcycle division and end of the 440.  It was no doubt a valiant and exciting effort that earned 440 a place at the Barber Museum but not much else.

So what do you pay? The seller is looking for a $6.5K starting bid. I think you shouldn’t pay that. Used examples have traded for far less over the years but so few “S” models are traded and conditions vary enough to the point it’s hard to pin down value. It’s certainly a rare and interesting piece that will get you an in with the bicycle community but that’s whole different set of risks and is arguably worse than overpaying.