We have 15 years of archives. Please note that posts over a year old may have been updated to point to similar bikes available to bid on eBay.
Yamaha September 7, 2018 posted by Tad Diemer
Share 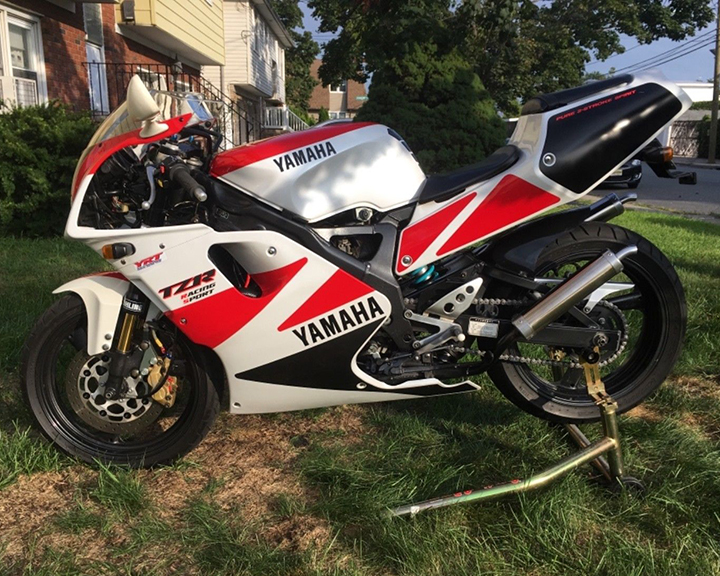 Yamaha’s TZR250 doesn’t seem to command the same prices or attention as Honda’s NSR. Which is interesting, considering it’s similar in terms of weight and performance, and the TZR is generally even rarer in every market outside Japan: both the 3MA and 3XV versions were officially sold in the Japanese market only, although plenty found their way to the UK, Europe, and Canada via “parallel import” laws. 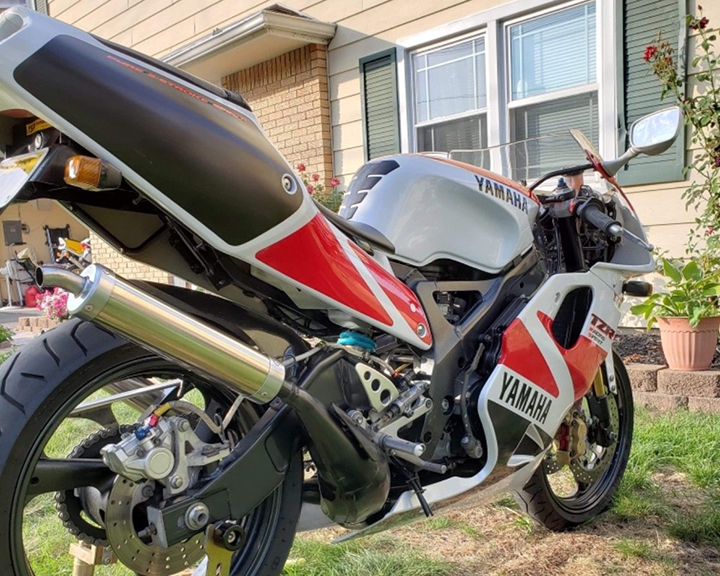 Certainly, the TZR isn’t lacking in technology: the 3XV packs an electronic engine-management system to rival Honda’s PGM-IV that controls the ignition advance, the powervalve, and the carburetors’ fuel mixture. Yamaha’s Deltabox frame is light and stiff, and the RS version seen here adds a dry clutch, close-ratio box, and later models even included fully-adjustable forks. This example goes a step further and has been upgraded with Öhlins forks and a Nitron rear shock. 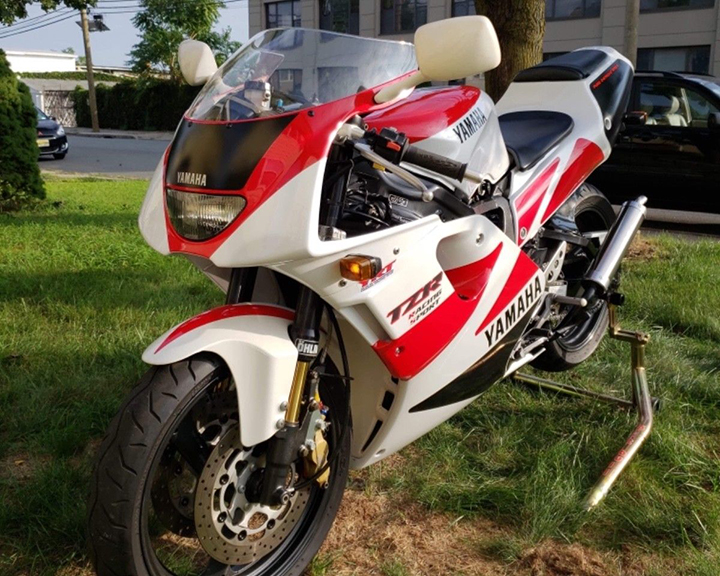 Ultimately, the package closely mirrored the rest of the class: 90° liquid-cooled two-stroke v-twin displacing 249cc, an aluminum frame, a six-speed gearbox, and the de rigueur powervalve to boost the two-stroke’s limited midrange. The seller is asking $11,500 for this updated, well cared-for example. 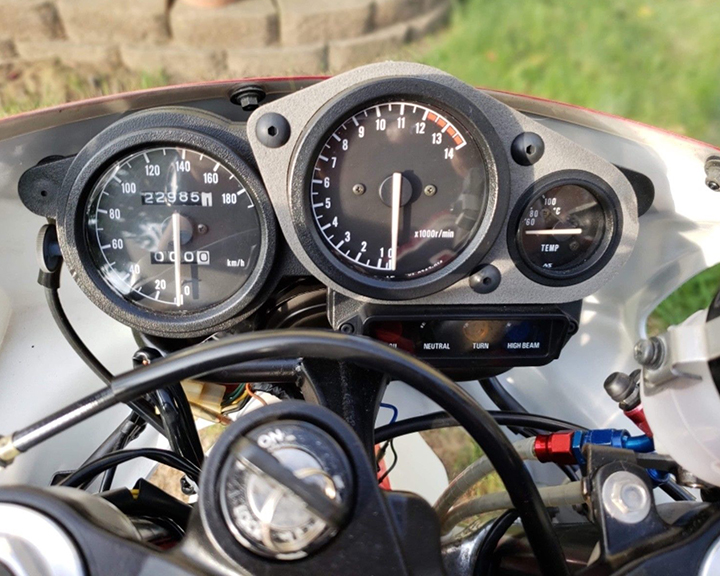 From the original eBay listing: 1992 Yamaha TZR250RS for Sale

You are looking at a super clean, well maintained and a hard to find TZR 250RS. The RS model comes with close ratio gear box, RS paint scheme, fully adjustable suspension and dry clutch. I upgraded the front forks with Ohlins components, Nitron R1 rear shock, Brembo calipers, Brembo pads, braided brake lines and full floating rotors. Maintenance was done which includes fresh Motul fluids (coolant, brake fluid and transmission oil), carbs been cleaned/synced. Bike is street legal, titled, registered and insured in NJ. Everything on the bike is OEM all original with the exception of the upgrades mentioned. You will never find another one in this condition. 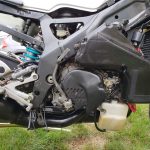 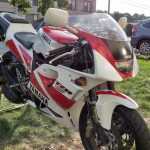 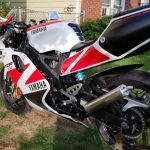 This one has been up for sale more than once in a couple different places, but appears to be very clean and comes with a New Jersey title, which is a nice bonus for anyone looking to ride their stinky little sportbike. The biggest question here is: has the bike been de-restricted? Collectors may not be too worried, but anyone looking to ride this anywhere outside a very tight, technical racetrack or a very twisty back road will want more than the government-mandated 45hp. The Japanese government, obviously: the US government regulates many, many things, but horsepower is not one of them. 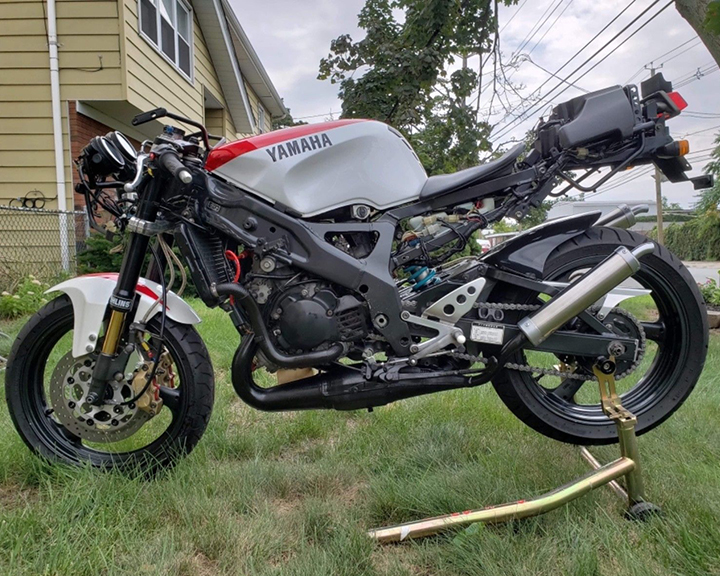 Update: A reader reached out to note that, “The forks are missing the compression and rebound clickers, those are R forks.” Seller replied back to us, “I pulled out the books and it looks like the first year for the RS model was a 3XV8 which had the same forks as the standard R model. The next year, 3XV9 and 3XVA came with adjusters.” Thanks to SmokinJoe B for the note and Gary for the response. -dc 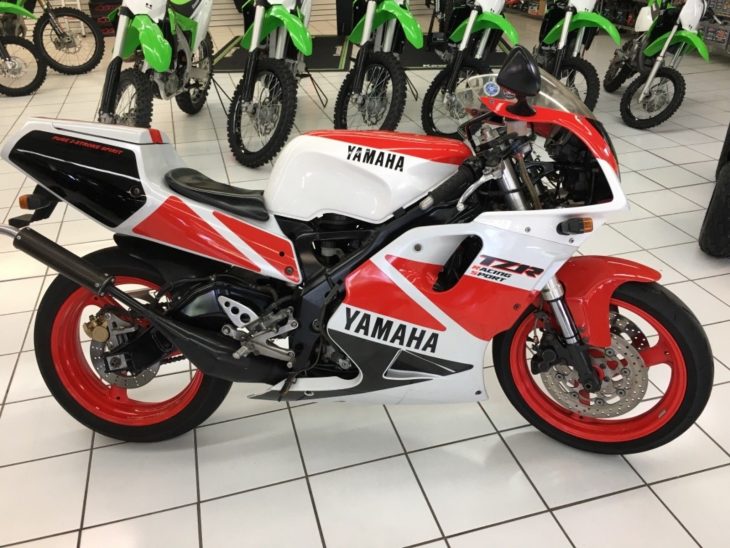 Yamaha’s two-stroke TZR250 was always a bit of an odd duck in the quarter-liter sportbike class. The first-generation TZR was the much more sophisticated follow up to the RD series of bikes and was pretty widely available everywhere but in the US, while later examples like the 3MA and 3XV seen here were only available outside Japan as grey-market or parallel imports and are considered exotic, even in markets where two-stroke sportbikes were common. 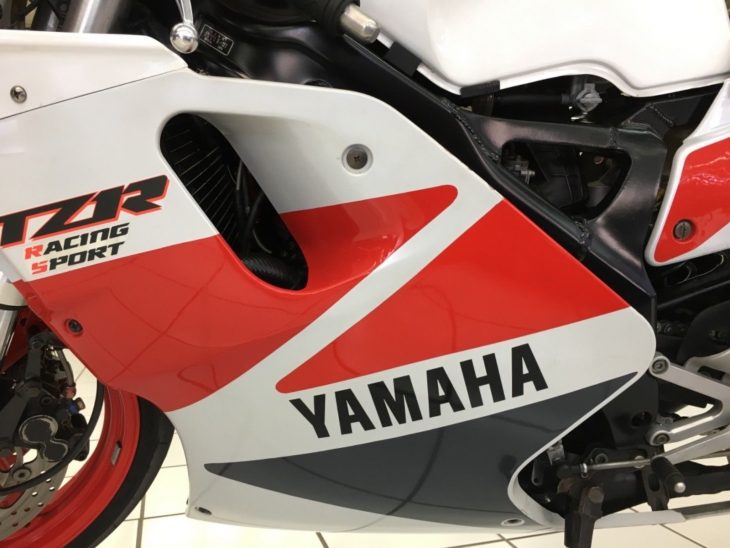 Early 1KT and 3MA TZRs used parallel twins, but the final 3XV version finally adopted an “if you can’t beat them” philosophy and changed to a small 90° v-twin to match the competition from Honda and Suzuki. The new v-twin displaced 249cc and was backed by a six-speed gearbox. Like the NSR, it featured computer-controlled ignition and Yamaha’s YPVS power valve system. In spite of all the trickery, it produced the usual 45hp, limited by the expected Japanese governmental regulations. The rest of the specification was pretty similar to the rest of the class as well: a 278lbs dry weight with a stiff aluminum beam frame like other bikes in the class, in this case an evolution of Yamaha’s Deltabox, with a banana swingarm to allow the bike’s distinctive asymmetrical exhaust to tuck in close to the bike’s centerline. 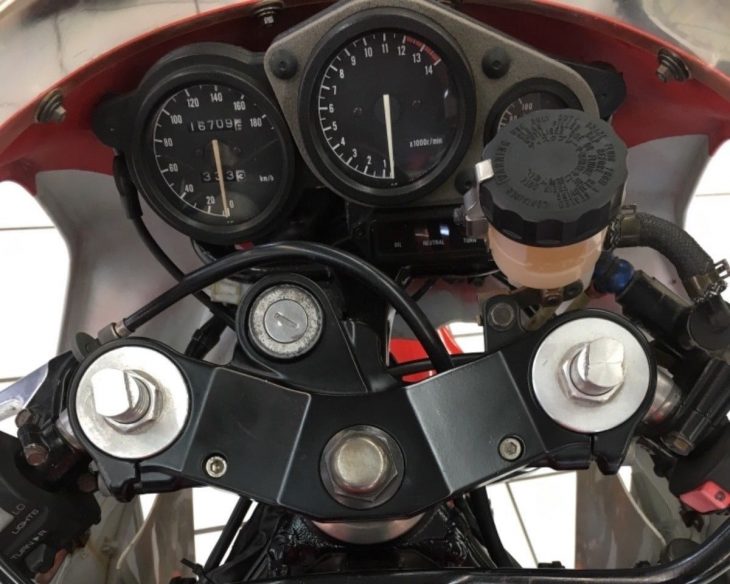 Up for auction to the highest bidder with NO RESERVE is a 1993 Yamaha TZR250RS with 16,709 kilometers (10,382 miles). This is the dry clutch Racing Sport model that everybody wants. Bike is in beautiful condition with a few scrapes and scratches. Tank is in perfect condition. All fairings are 100% genuine Yamaha OEM. Upper fairing appears to have been professionally re-sprayed. Bike has a tremendous amount of curb appeal. This RS is a solid rider and is ready to go. Full service just performed with new battery and fluids. Bike runs flawless. Bike comes with Utah state title and is titled as a streetbike for road use. 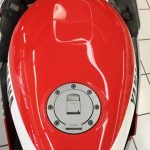 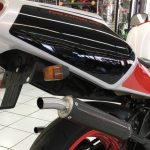 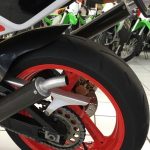 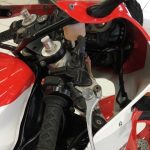 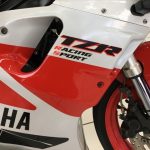 Bidding is up to just $6,100 with a couple days left and the reserve has been met! As rare as all of these two strokes have been up until recently, I’ve seen quite a few Hondas and even a few Suzukis, but the various iterations of the Yamaha TZR are still uncommon here in the US, especially in clean condition with OEM bodywork. I’m not clear what “beautiful condition with scratches and scrapes throughout” means exactly, but I’m assuming it means it’s been well cared-for and the paint looks good, but has the usual minor blemishes a bike picks up through normal use: a scratch on the tank from a belt buckle, a scuff on the tail from a boot while swinging a leg over, a scrape where another bike parked too close at a bike meetup. 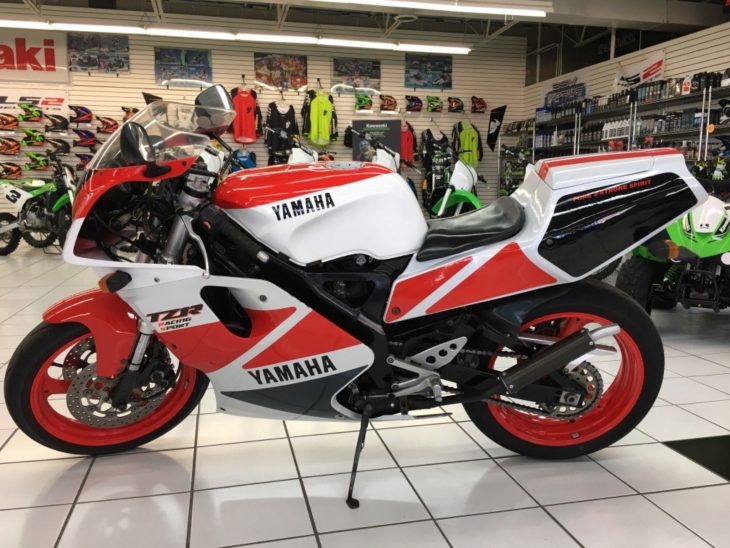