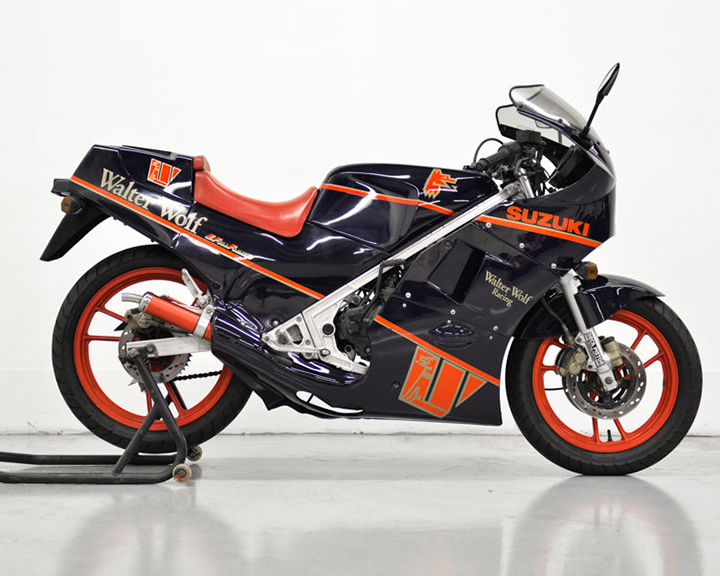 The parallel-twin precursor to the well-known RGV250, the Suzuki RG250Γ “Gamma” was built between 1983 and 1987. Dry weight was a claimed 286lbs, helped by the aluminum frame, so the bike’s 45hp can still move the bike down the road smartly. The little Gamma was styled to match the RG500, and was packed with technology to rival its bigger brother: dual front disc brakes, anti-dive front forks, Suzuki’s Automatic Exhaust Control power-valve, and a six-speed gearbox. Tires are shockingly skinny, especially the 18″ rear, but the low-mount exhausts look surprisingly modern on this classic sportbike. 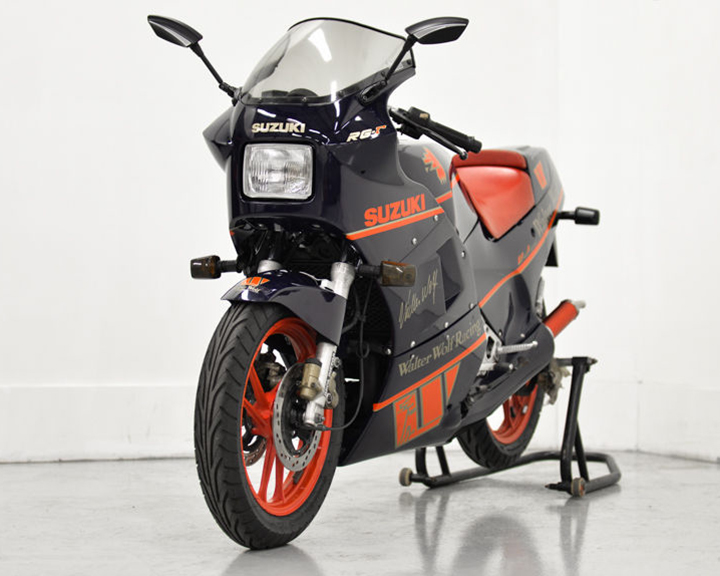 Styling is a bit slab-sided, but is helped here by the dark blue and red Walter Wolf colors, while the “W” branded gauge faces add a bit of flash to the otherwise functional dash. Although he sounds like the villain of a spy thriller, Walter Wolf was an Austrian-born, Canadian businessman who sponsored several Formula 1 racing teams in the late 1970s and then touring cars in the early 1980s. How they thought to use a limited-production motorcycle to advertise the brand is anyone’s guess, but it did make for a good-looking machine. 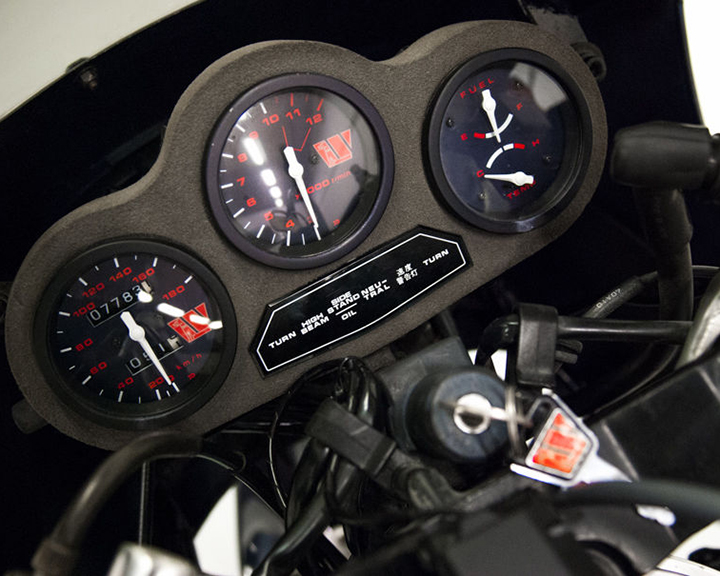 Mileage on this example is very low and, although the bike isn’t perfect, is in very good, original condition, aside from the stingers mentioned in the listing. Even the foam instrument-surround looks solid. The seller has been importing grey market Japanese cars like Skylines and Kei-cars and for a few years now, and appear to have branched out into motorcycles more recently. 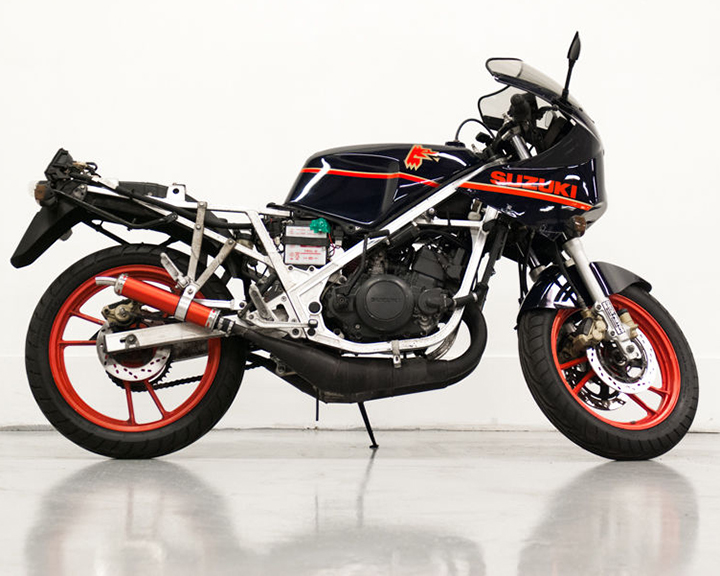 This bike only has 4,836 ORIGINAL MILES! The Suziki RG250 Gamma was never originally offered in the U.S., but now that it’s 25+ years old, we’ve been able to legally import it.   It’s 100% Federally Legal and registration is like any other motorcycle. We have a valid Virginia title that is transferable to all 50 states.

This 1986 RG250Γ Walter Wolf example is in very good condition with just 4,836 original miles. The appearance is correct for the year with a red seat and wheel combination. The wheel size is 16” up front and 18” in the rear which was standard for the 1986 model. The only change appears to be a set of aftermarket mufflers and mirrors. The full aerodynamic fairings and exterior as a whole are clean for a motorcycle this age. There are a few light blemishes and a small crack on the right side fairing

The 247cc parallel twin two-stroke starts on the first or second kick and accelerates well with good pickup. Overall this unique and rare sports bike is mechanically sound and ready for its next owner. ***All of our vehicles come with a valid Virginia title, transferable to all 50 states, and a copy of the U.S. Customs release. All vehicles are located in Richmond, VA and shipping can be arranged to your front door.

You will not be disappointed with this motorcycle! We also have a number of spare parts available with this motorcycle. Including an extra fuel tank, Gold OEM Enkei wheels, brakes, stock exhaust, Solo + Passenger seat, and tail section. All of our vehicles come with a valid Virginia title, transferable to all 50 states, and a copy of the U.S. Customs release. All vehicles are located in Richmond, VA and shipping can be arranged to your front door.

This motorcycle was imported LEGALLY! It was NOT imported under a loophole, so there is no chance that it can be seized by the government. It will come with a CLEAN, CLEAR, VALID VA TITLE, and a U.S. Customs Release. **FEDERALLY LEGAL IN ALL 50 STATES** 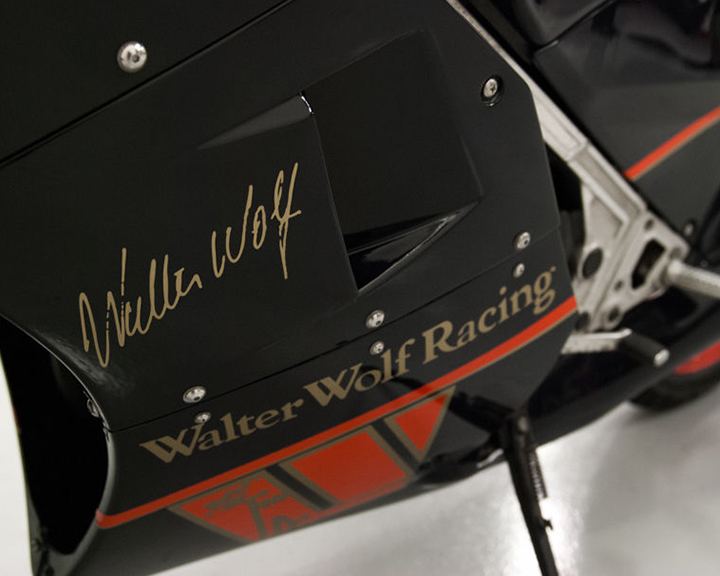 There’s more than a week left on the listing, so there’s plenty of time to snap this bike up at that $6,000 Buy It Now price. If you’re looking for a handler, one of the more modern RGV250s is probably a better bet. But for that unadulterated 1980s experience, that seems like a very good price for such a clean machine. In spite of the sellers assurances, I’d check with my local DMV before bidding, but that valid title should make things a bit easier. 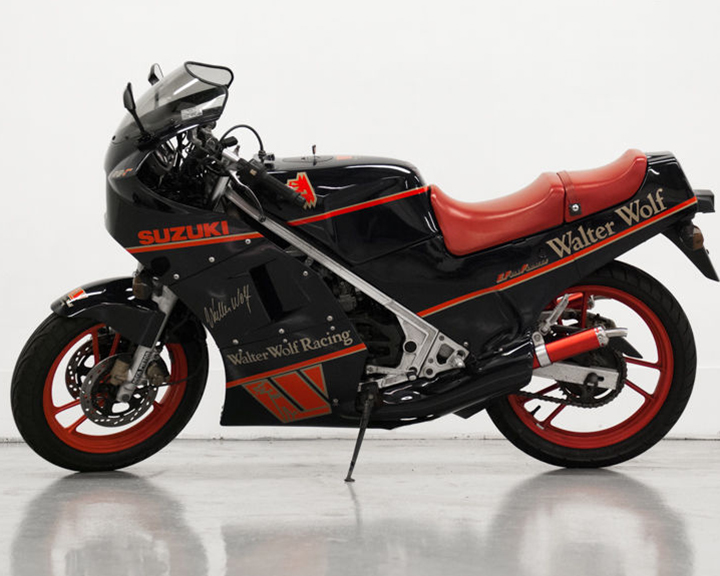