We love Ducati’s MH900e here at RSBFS, but that’s not the reason we posted these – rather it’s because they have got to be the most expensive Ducati’s ever at $497,500 EACH!  Let us see why: 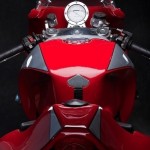 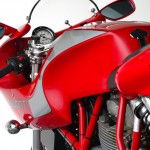 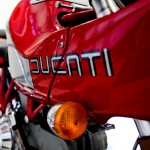 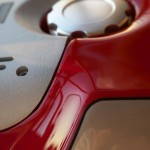 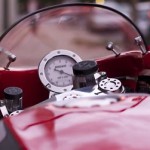 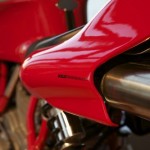 Redheads.  Two examples of the finest contemporary design Ducati has given us in this 21st century.
They are inseparable – for sale as a pair..  #’s 1588 & 1740. They are the two lowest mileage specimens in the US, possibly the world [hmm…possibly, but very unlikely].  With zero and three miles respectively, these two motorcycles are as collectible as can be.

Let me be perfectly clear:  This auction is for TWO MOTORCYCLES.  They are the two lowest mileage examples of the MH900E to be found in the US, possibly the world.

Half of the proceeds of this auction: at least $497,500 – will be donated to charity – I prefer Habitat for Humanity or Feed the Children, but if you have a strong preference, I’ll consider it. [so what happens to the other half of the proceeds from the auction?]

“The Art of the Motorcycle was an exhibition that presented 114 motorcycles chosen for their historic importance or design excellence in a display designed by Frank Gehry in the curved rotunda of the Frank Lloyd Wright-designed Solomon R. Guggenheim Museum in New York City, running for three months in late 1998.

The exhibition attracted the largest crowds ever at that museum.”

The bike that Ducati called the Mike Hailwood Evoluzione is possibly one of the most beautiful motorcycles to be launched in the 21st century.

That this motorcycle was launched and sold out completely on the very first day of the new century, the new millennium, was remarkable.

In a stroke of marketing genius, Ducati offers the motorcycle for one day – January 1st, 2000, to celebrate the new millennium.  The entire production run sells out in one day – gone

The MH 900e is not just unmistakably a Ducati, with the silencers underneath the tailpiece, it’s what Ducati makes when they intend to create a machine as art.  Form does not follow function on this machine.  Form is everything…

We have two MH900e’s for auction here…

Sisters, if you will. One has 3 miles, the other, zero.  It’s a dry bike – uncrated and stored. They are for sale, but only together, as sisters.  I will not separate them. [oh, that’s rich…]

That is what makes this auction unique.  Two..  Delivered…  by Christmas morning…

The shape is neo-classicical.  You can’t tell if it’s a prototype of a bike they might build in two years, or a machine from the 80’s.  The L-twin engine is exposed to view and the curvalicious minimal front fairing is the most beautiful front end we’ve seen in years.

We offer both of our Pierre Terblanche designed Ducati MH900e’s to add to your collection.

These are a museum quality pieces, they are both completely stock, and certain to take center stage amongst any collection.  We imagine them flanking the the Christmas tree…, or arranged in a V at the bottom of the stairs..

We at AteliersVelocette cater to A-list clients.  Delivery is discreet and bonded. Delivery anywhere in the world, by Christmas morning, included in the final price. All paperwork, keys, stands, T-shirts, etc. included.

Half the proceeds of this sale go to Habitat for Humanity, New Orleans, Doctors without Borders, Haiti, or Feed the Children, at your direction.

(This award of 50% of the proceeds will most likely take place in a publicized event after the auction completes, on the Today Show, Good Morning America, Oprah or Ellen by AteliersVelocette’s founder.)

There you have it, but it still leaves me scratching my head why I would want to pay close to a million dollars for two Ducati MH900e’s.  Just in case you’re wondering what the market price is on the MH900e, click here to see previous listings.

Don’t get me wrong, I’m not slagging charitable donations by any means, but by my logic it seems that the buyer (if there will be one) will be paying $497,500 for two MH900e’s and the other $497,500 to appear “in a publicized event…on the Today Show, Good Morning America, Oprah or Ellen…”

What baffles me is that  a.) I can think of much cheaper ways to get a pair of low mileage Mike Hailwood replicas (might not be ‘sisters’ though – heh)  b.) there are other (or cheaper) ways to appear in a publicized event  c.) if I have that kind of money to donate to charity, I probably wouldn’t need to do it through an ebay auction!

But hey, any ebay seller by the name of “worldsbestguy” must surely know more than I do! So if you’re looking to buy a pair of zero miles (well, one with 3 miles) Ducati MH900e’s, have $995,000 burning a hole in your pocket that you want to donate to charity AND appear in a publicized event, .