In many parts of the country, it would appear that a wet winter has relented to an early summer. Warmer temperatures seem to prevail, which leads to more riding, sooner in the year. This particular RZ500 – the model a shoe-in for top 10 bikes searched by RSBFS readers – was a Canadian import now a Florida resident. With importation already taken care of, an avid rider can simply take advantage and shred a knee puck or two. Dragging appendages shouldn’t be an issue, given the RZ’s reputation for outstanding handling; the frame is a basic-yet-stout mild steel box-section affair arranged in a perimeter layout. The rest of the bike is packaged around the fabulous V-4, two-stoke power plant, with the rear shock placed horizontally under the engine. Given the need for expansion chamber space (it is a smoker after all) the under-seat area is chock full of the upper cylinders’ pipes. The end result is more mass down low, and a very transition-friendly machine. 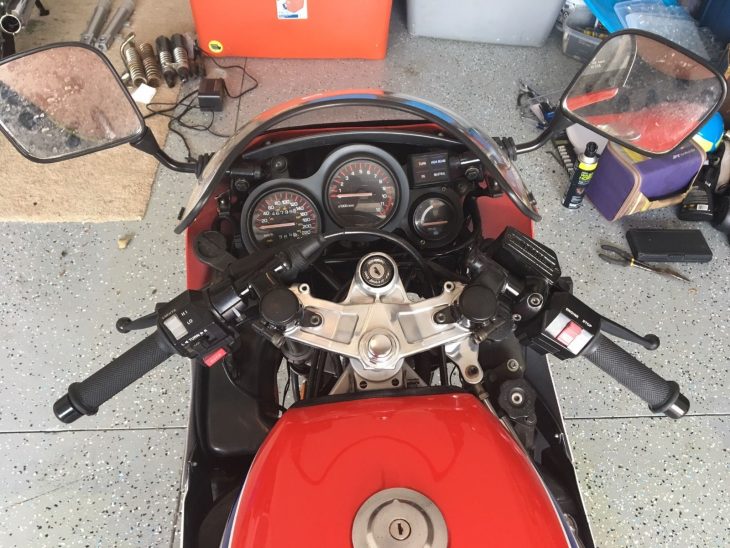 From the seller:
RECENT CANADIAN IMPORT. PREVIOUS OWNER BOUGHT FROM ESTATE SALE. OWNER DECIDED TO POWDER COAT FRAME AND WHEELS AS THESE LET DOWN THE CONDITION OF THE REST OF THE BIKE. THE FRAME AND WHEELS CAME OUT AMAZING.

HE HAD ANOTHER MECHANIC HELP HIM CHECK OUT THE ENGINE AS IT SHOWED 46K KILOMETERS ON THE SPEEDO. ENGINE HISTORY WAS UNKNOWN. COMPRESSION/LEAK DOWN CHK WAS GOOD AND THE ENGINE WAS IN PRISTINE CONDITION VISUALLY WITH NEWLY FINISHED COVERS ETC ALL GASKETS THAT WERE VISIBLE LOOKED NEW AND THEY TOOK CLUTCH COVERS OFF ALL LOOKED GREAT. THE CARBS WERE CAREFULLY TUNED AND SET UP AND THE BIKE RUNS LOVELY. STARTS HOT OR COLD AND REVS FREELY.

A VERY GOOD 9 I WOULD SAY FOR CONDITION PLS CHK PICS AND SEE FOR YOURSELF. From a riding perspective, it is very hard to go wrong with an RZ500. These are performance machines, and provided you are willing to deal with the vibration, smoke and somewhat compromising riding position, you might think you had died and gone to heaven. Power is quite respectable (about 80 HP in stock trim), and weight is nicely managed with a claimed dry weight of 438 lbs. Prices have held strong over the last 5-7 years, making this a model that costs more to get into with each passing year. That is bad news for someone who wants one, but good news for anyone that either has one or has the cash to purchase one. This is a safe investment bet from a two wheeled perspective, although the appreciation may not be as great as with other machines (i.e. RC30). This bike is available in Florida. It is not clear if the seller simply imported the bike, or imported and legally registered the bike for use in the USA. That would be a pretty big decider, as a licensed RZ500 in the US is worth more (considerably more) than a “sold with a bill of sale” example. The seller does claim a mechanic has made an inspection of this approximately 28,000 mile machine, but seal replacement can be critical to a two stroke to prevent air ingestion (and the resultant lean seizure). As always, we recommend that you investigate carefully, as lots of questions, and – if at all possible – see the bike in question in person. This is a popular auction with bidding above $9,000 USD and reserve not yet met. Check it out here, and be sure and share your thoughts on the model. Good Luck!! 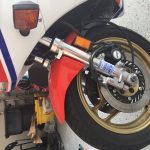 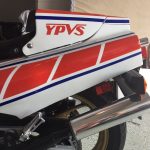 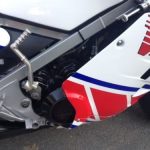 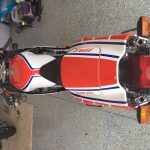 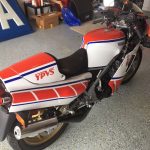 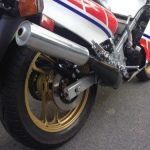