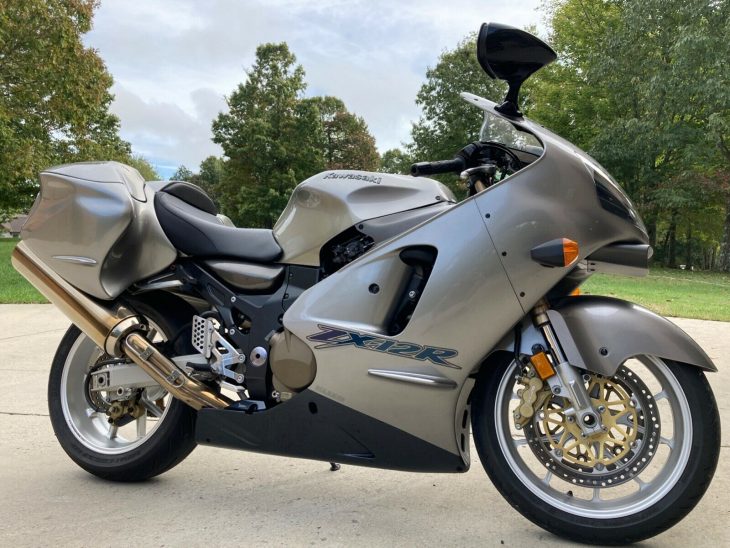 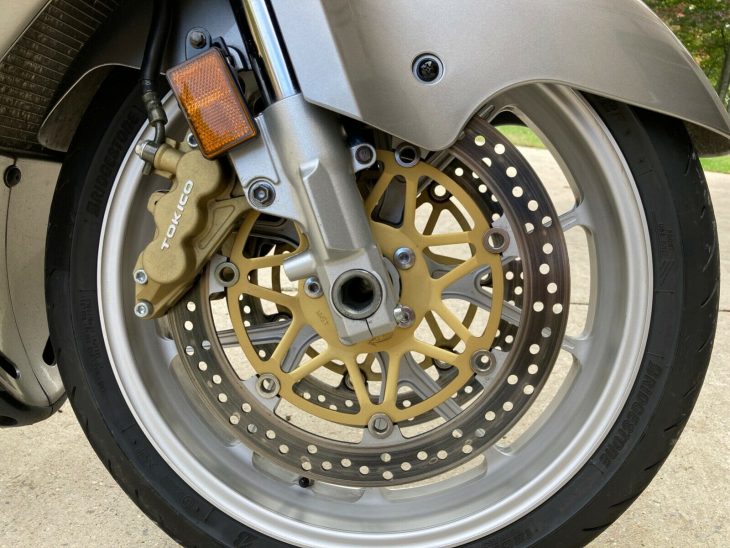 Note:  this photo is a stock photo, not a pic of the actual bike from the ebay auction

Only one modern day motorcycle company has consistently focused on offering riders the potential of “ludicrous speed“;  Kawasaki.  From the GPZ of the mid 80’s to the Ninja/ZZR of the 90’s & early 2000’s to the modern day H2, Kawasaki has staked out a position as the company that offers average folks the opportunity to reach the upper boundaries of speed (even though most riders rarely do this). The ZX12R was one of the the “team green” bikes designed and built in accord with this philosophy.

“There were factions within the company who questioned the need for a machine this fast and powerful.  I had to explain to them that to many riders, a machine´s potential is what makes it so alluring, regardless of whether they themselves will ever exploit that potential.” 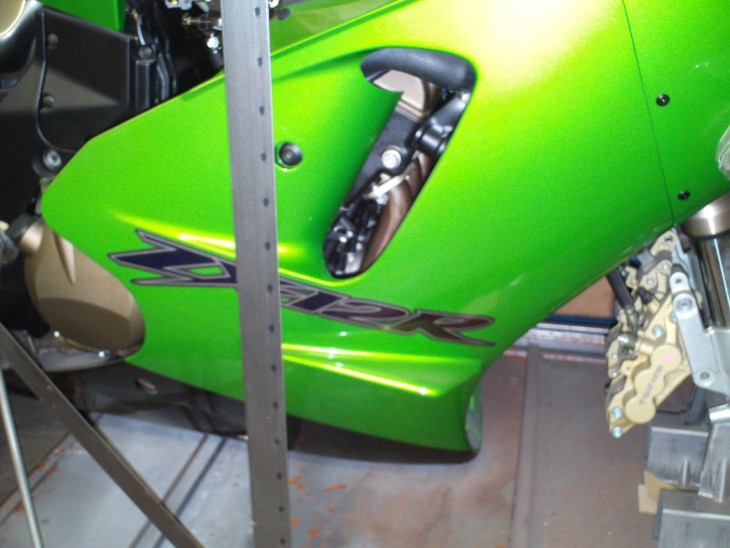 The ZX12R was launched in 2000 to compete against similar 200 mph limit pushing bikes such as the Suzuki Hayabusa and Honda Blackbird. While the ZX12R didn’t quite hit the 2 ton mark out of the box, it did offer something the competition did not; looks and usability.  Like the ZX10 and ZX11 that came before it, the ZX12R was capable enough to use as a sport tourer or daily commuter for larger riders.  Slim by hyper-bike standards (unlike the portly Blackbird) due to an innovative monocoque aluminium frame, the ZX12R came with a handy LCD main dash display, a fuel gauge and clock.  Big mirrors were considered ugly but were effective and there were even built in bungee hooks (though no grab-rail) in the rear fairing.   The somewhat tall 32.3 inch seat was a bit much for anyone under 5’10” but gave larger riders plenty of legroom. 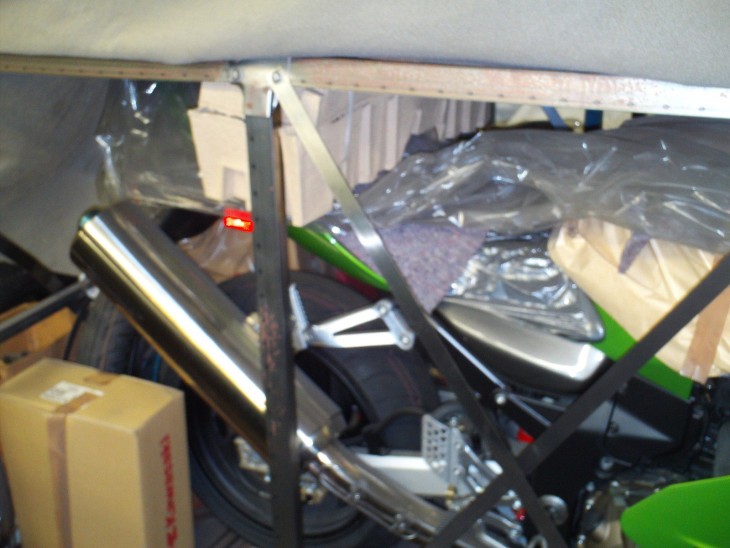 Of course, the real heart of the ZX12R was the powerplant.   In traditionally Kawasaki fashion, the motor was strong over the whole rev range, pulling all the way from 3000 rpm to the 11,500 rpm limit. Reviewers wrote that “the ZX12R is in its element on a fast road with little traffic about; its ability to overtake is so fast that it lifts the paintwork from car doors without so much as a flick down through the slick six-speed box which, gives it an edge even over the Hayabusa.”

Perhaps the real accomplishment of the ZX12R was how well it handled the prodigious power output, especially given the bike weighed over 400 pounds/200 kilos.  Its steering geometry was set up to be significantly sharper than the Hayabusa and Blackbird competition and was combined with a well-damped suspension, resulting in a respectably flickable bike.  It wasn’t a razor ala a GSX-R750 or Ducati 916 but the big ZX12R could hold its line in a corner without worrying about a minor bump and then a simple roll on with the throttle blew the competition into the weeds. 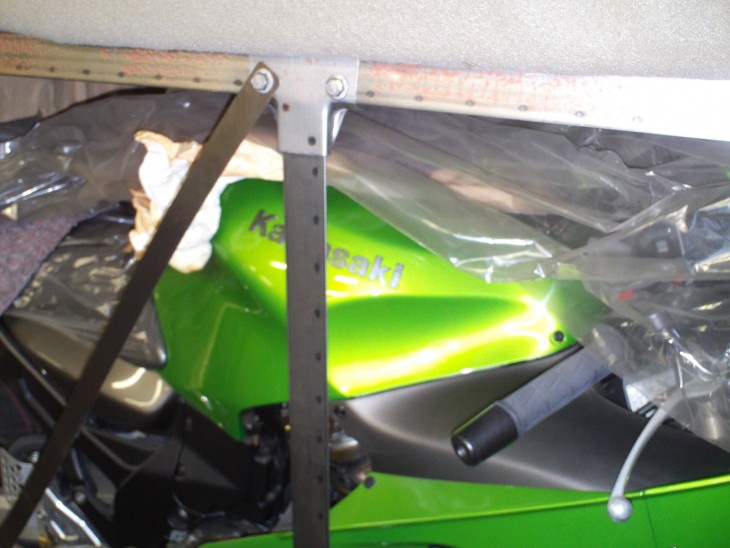 NOTE:  This particular ZX12r is still new in the crate so like most crate bikes, photos dont give a lot of detail.  It would be interesting to know if any fluids were ever installed.  Also tires might need to be replaced if they were not stored properly. 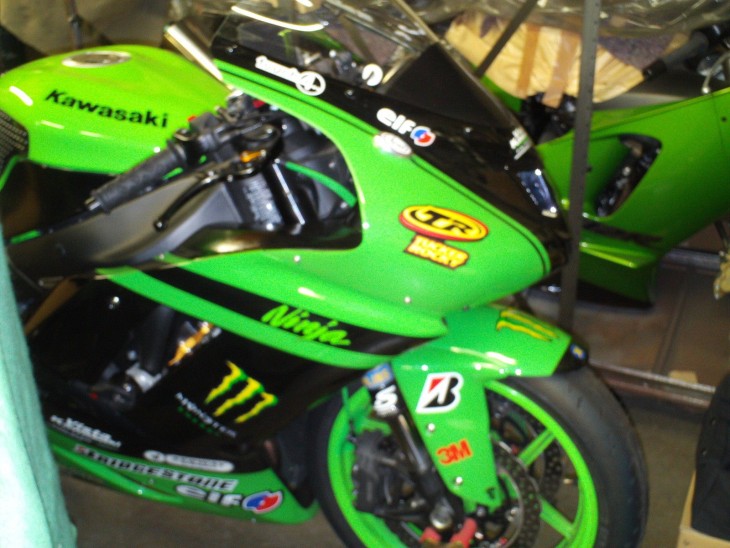 The track bike mentioned in the listed details

Is this ZX12R worth the $9,999 USD asking price?  Honestly, I dont think so.  I seem to be he resident early 2000’s hyperbike fan here at RSBFS and even with this being a NOS/in the crate bike, I think the asking price is kind of high.  The successor ZX14 can be had for less or near the same price and there is always a bit of a risk of the bike having been used as a source for spare parts when the seller also  has the same model in use for racing.

Personally I think this one is worth around $8,000 USD.  I don’t think this one is going to go through a dramatic price appreciation for collectors but it might appeal to someone who missed out their opportunity to get one back in 2000.  Any buyer would be getting a bike that is probably the best looking of the big hyper bikes of the early century.