NSR 250se MC28 with low miles and it looks to be super clean from the photos. Though it isn’t stated in the ad, this one is titled and registered in California 🙂 .

This example is said to be all original and only has around 5,800 miles on it. MC 28’s were in full swing in 94 and the NSR’s were highly developed by this time. The PGM IV carburetor management system worked better than any previous year and was said to be the best to date for street riding. In 1994 the ProArm NSR SE models were equipped with the dry clutch and Showa’s fully adjustable suspension front and rear. They also received upgraded colored front rotor hubs (as if that really matters), but hey, when you are trying to sell 250’s for $8,000.00 usd I guess you need to throw in anything you can to fill up the brochures.

This one is listed for $8,000.00 and considering it’s all original, has low miles, is titled and licensed it probably won’t be around too long. 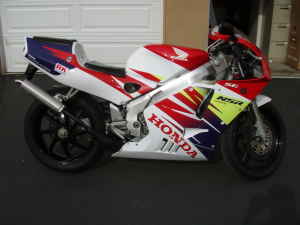 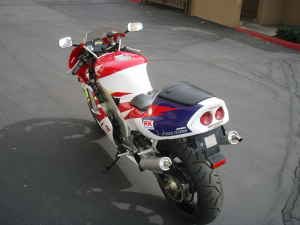 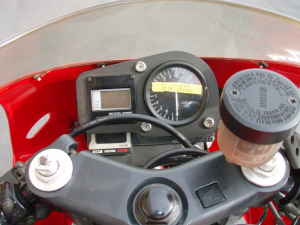 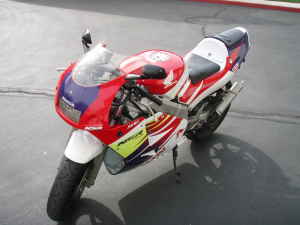 If you want to know more about the history of NSR’s you can view it here.

Not to beat a dead horse, but I wish one (or more) of the major motorcycle manufactures could find a way to produce a sport version small cc bike. Obviously, the problem is pure economics. There simply aren’t enough people, like myself, who want a 60hp sport bike. What fun would drag racing a 60hp bike be? Or can you imagine extending the swing arm on one? HA!

Star light, Star bright, First star I see tonight. I wish I may, I wish I might, Have this wish I wish tonight.

There! Maybe that will help 🙂

This bike is in beautiful, recently restored, condition!  Located in Dover, Delaware is a recently restored Honda NSR250SP Rothmans bike.  Details are still scarce but there are plentiful pictures and a known asking price of $6,000 and the bike shows 11,450km.  If this bike is titled it is a very good price! Details will be updated when/if we get them before this bike sells.  As you should know, this is the only generation to use the PGMIV and the only one with the Pro-arm rear swing arm.  See the ad on ApriliaForum here; and see the detailed photos on Picasa Web here. 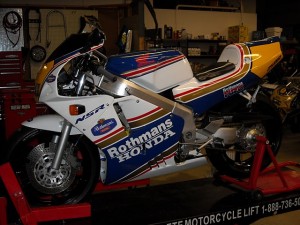 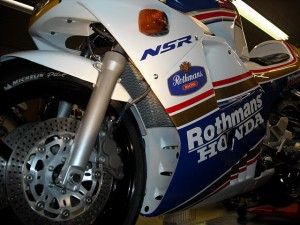 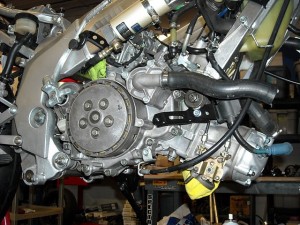 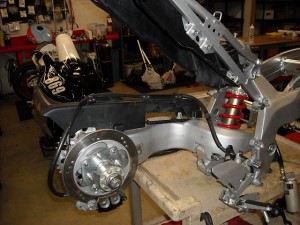 Ah yes… I am always excited to see one of these for sale and this one has me smiling once again.

Located in Baltimore, Maryland with all the cards and manuals. 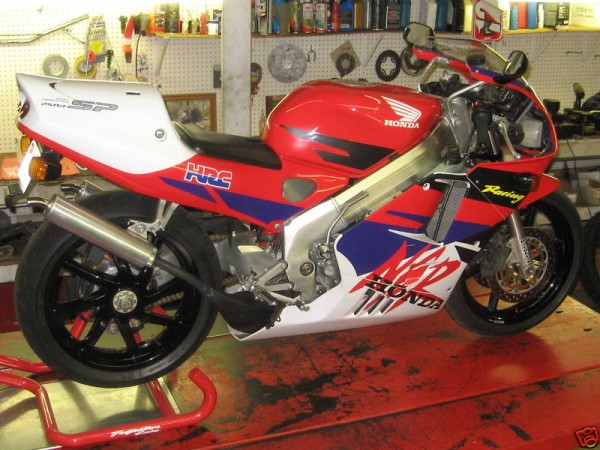 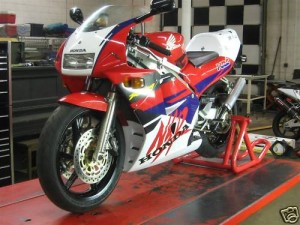 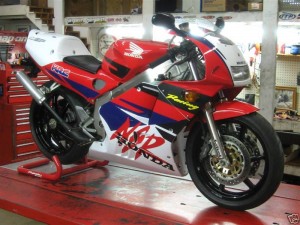 Information from the listing:

This is a 1995 Honda NSR250SP grand prix replica motorcycle. This bike is in excellent condition and runs great. I have babied this bike since I bought it in 2001, and it has never been ridden in the rain or left outside overnight since I have owned it. This bike is tagged and registered in Maryland and has a clear title. This bike appears to have never had any engine work or modifications, and everything is original except for the tires, chain, and steering damper. The tires and chain only have a few rides on them; the steering damper was on the bike when I bought it. A new battery was installed just before this listing was made. The tank has a small dent on the top to the left of the cap, but it is hard to show in the photos. The underside of the fairing has normal road wear, but no cracks or breaks. The sides of the fairing have small scratches on them that are visible in the photos. This bike overall is in excellent condition, and people can’t believe it is a 1995 model when they see it. Please feel free to ask questions or request more photos.
The Two Brothers stand is included. I have both of the original Honda Credit card keys and the factory owner’s manual (in Japanese) and tool kit. I am also including the spares that are shown in the photos, which include a new clutch and front brake lever, new intake manifold, new rear brake pads, new throttle housing parts, new shifter, and some used parts (which did not come from this bike).
This bike has not been derestricted or modified. The SP spec includes the dry clutch, magnesium MagTek wheels, and fully adjustable suspension, and this was the top of the line NSR made. I believe only 1500 of these were made in 1995.

These gems don’t come around that often and this one is said to be unmolested in any way, other than a small dent in the tank. The bike shows well in the pictures and is said to have 11,969 miles on it. Anyone want to buy my 98 VFR and 89 FZR 400 so I can get serious about buying a 2 stroke? Oh, did I mention the owner states he has both of the credit card keys? That in itself is pretty hard to come by much less a pristine looking MC 28.

My fellow RSBFS author Steve was gathering information about this bike when he realized I had beaten him to the punch uh……. I mean post. However, he was gracious enough to share all of his insightful info with me to make it a collaborated post. So instead of me taking his graceful post and butchering it with my Midwestern slang, I decided to put it up as he had intended.

“In November 1993, the first MC28 went on sale. The styling was only subtly changed, with the seat unit and nose fairing mimicing the factory NSR500 and NSR250 respectively. There was one major styling difference though… the Pro-Arm rear swingarm. This swingarm, originally designed and used on the RC30 for endurance racing, was the last word in styling!

The MC28 was also the first and only Honda to utilise the PGMIV, activated by the much hyped “Smart Card”, a device initially marketed as the ultimate tool in engine management! The idea was to be able to use several different cards, each with their own ignition characteristics, for any given track or weather condition. It was also the first production bike to sport a digital display. In reality however, the PGM-IV only served as a clever restriction aid introduced by Honda to comply with Japans ever increasing clampdown on power output and licensing laws. In fact, the PGM-IV makes the MC28 the costliest and hardest of the NSR’s to derestrict.

Although up on weight and down on power, the MC28 still remained the ultimate 2 stroke race-rep’, with only Suzuki’s 1996 RGV250R VJ23 trying to keep pace with the NSR’s ultra high specification.

Throughout its years (1994-1999) the MC28 remained virtually unchanged mechanically, and all three standard models were still available; the R, the SE, and the SP. The 1994 SP was again released in Rothmans colours, with a limited run of 1500 bikes, and in 1995 another 1500 limited edition SP’s were released in HRC Racing Colours.

In 1996 the R model was discontinued, and only the SE and SP were sold. Only 1000 SP’s were built, and were painted in Repsol colours to commemorate Mick Doohan again winning the World GP championship title.”

I couldn’t have said it better myself!

Let the two stroke madness continue! This time we have a great looking MC28 NSR250 in Hilo on Craigslist for $15k: 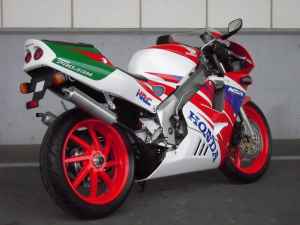 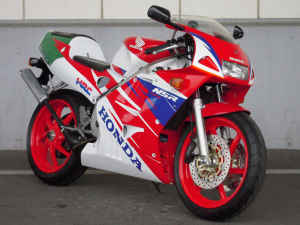 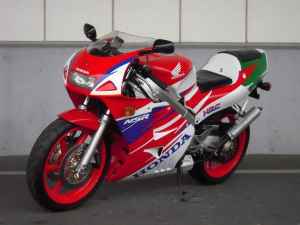 Excelent Condition I bought in japan 1994 in New, and I went japan 5 times to bring all parts to assanble in hawaii
one of the kind in the world . I disply in my room over 10 years. !! Every 2~3 times a month I turn Engine outside of my garaged. Never raced and you can tell that NO scraches No dings Nothing at all !! I just Enjoy for disply in my room that all !! I spend over $7000 for Air ticket fee to japan and cargo charged for all part to bring here . Im certifiled Honda Motorsycle mechanic in japan . so assanble is 100% perfect !! Took 1 week to build the machine !!

By now you know that this site loves the NSR250, but this one really seems to be priced a fair bit above the rest. Then again if you were looking to buy from Hawaii, this one is already nearby and shipping will be cheaper. Maybe it adds up for the right buyer.

Located in Laguna Niguel, California is an outstanding 1995 Honda NSR250 SE.  This bike is titled and registered in California!  The seller does not list mileage but states the bike is in excellent condition as the photos show.  The asking price is $10,500.  Click on the ad just to enjoy the photos!  See the Craigslist ad here. 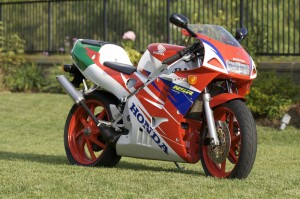 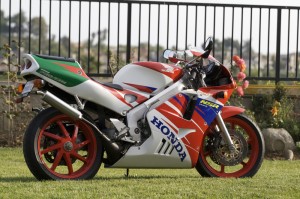 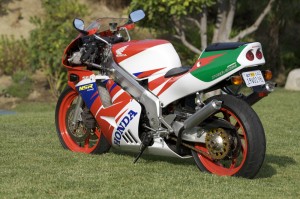 Mark sent me this link to his for sale site featuring his beautiful NSR250 about two weeks ago. My schedule the last couple of weeks has been hectic and I’m just now getting back to getting this one posted. My apologies Mark!

Without further ado, feast your eyes on this rare opportunity to own this MC28 NSR250R2R SE “Special Edition” for $10,500: 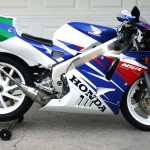 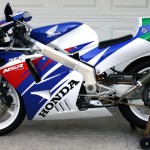 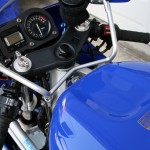 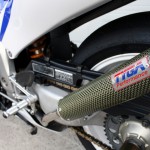 Make sure to check out his site for more hi-res images and a full write-up on what makes this bike special. After you’re done there, check out some of those sweet looking hoops at http://www.forged-wheel.com

Thanks for submission Mark and good luck with the sale! 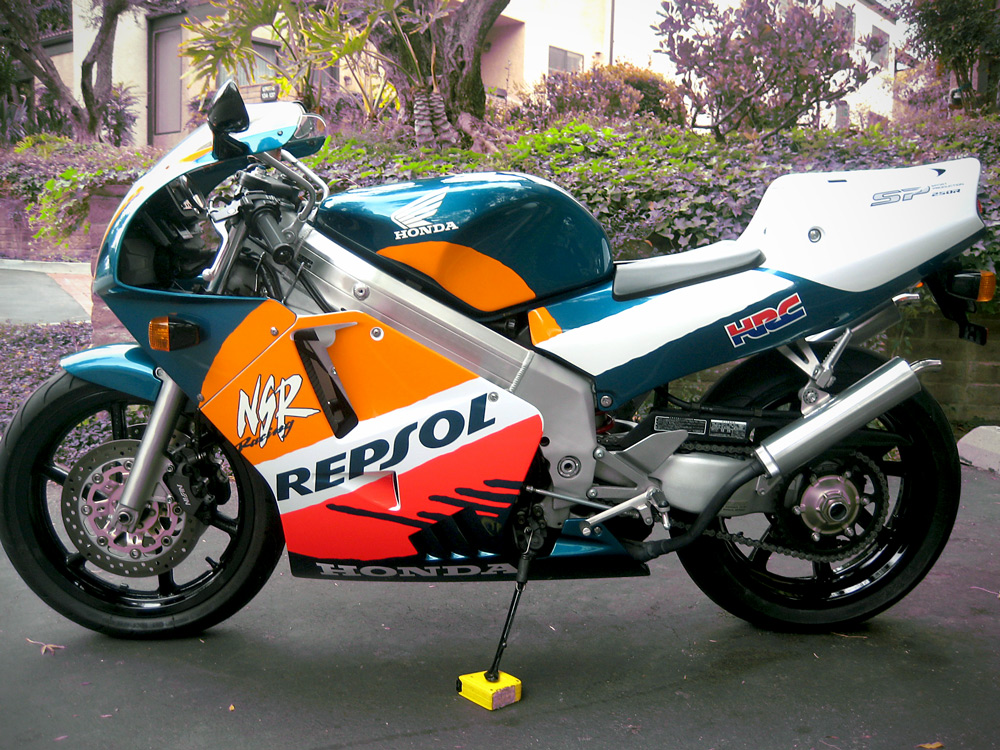 Gary’s 1996 Honda NSR250SP is our first ever featured listing. I’m especially proud to feature this particular bike as it is one of our favorite models on Rare Sport Bikes For Sale. And it is very special indeed with very low miles and no stories. 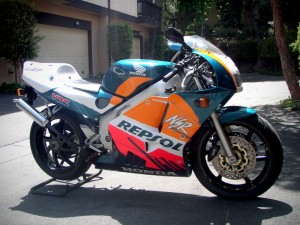 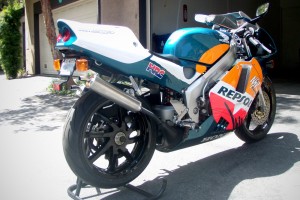 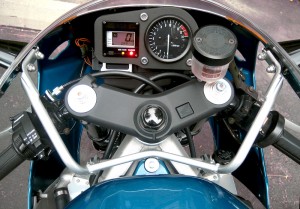 This is a real and very rare (especially the miles) 1996 Honda Repsol NSR 250 SP #143 of 1000 made, the lowest number and last year of the SP. It took me years to find this one and I have never seen another Repsol with this low mileage. About less that 100 made it to the USA, most stayed in Japan or were shipped to the UK because they are legal there. This one runs on the stock card. It does not have the de-restricted wire splice done so the miles are exact at 4,700 miles. Most other NSR listings that claim to have low miles are running the HRC card and miles are no longer accumulated, even though they brag “low miles”, but you may have noticed they have had the top rebuild, new chain & sprocket…

This bike is in excellent condition. I don’t ride it, it’s just for show. Comes with a current Texas registration title 03/2010 and bike is located in Los Angeles. Had the very first tire change in April of 2007 and only has 600 miles on them. Also has the original chain & sprocket, and no top end rebuilds.

When people see this bike it looks brand new. It was the 2008 Woodley Park 2 stroke extravaganza winner for best Honda.

Surely one of the finest NSR250’s ever listed on this blog and a rare opportunity anywhere to pick up a very important and collectible motorcycle. Good luck with your sale Gary!

Located in New York is a clean, and recently serviced, 1994 Honda NSR250.  This bike has 250 miles on a top end rebuild and 18,500 total kilometers.  This NSR has a HRC 030 card and stock card, Tyga exhaust, and an extra set of Repsol bodywork with tank.  Bike is shown US registered and therefore assumed titled.  See this nice example of a NSR on eBay here. 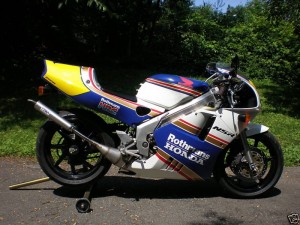 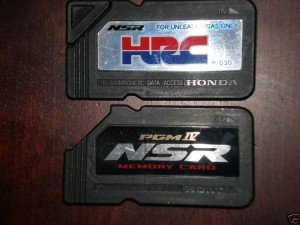