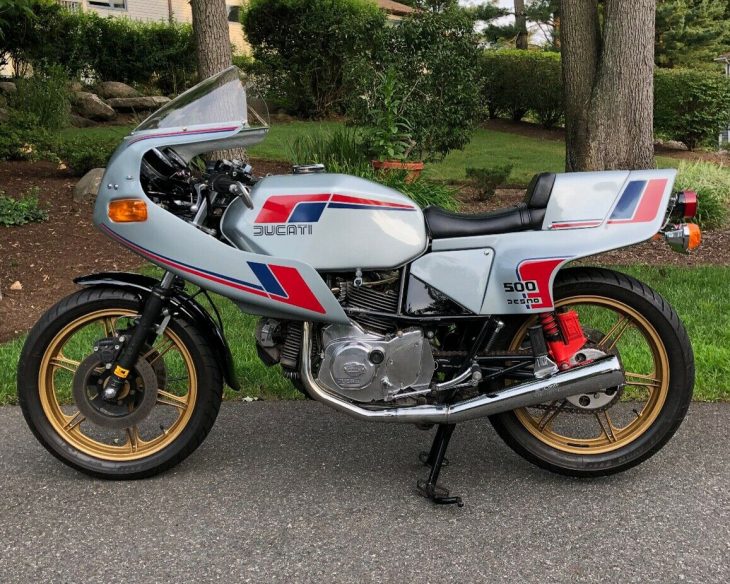 The Ducati Pantah 500SL was a watershed moment for the company, a bike that seems a little underwhelming at first, but actually launched them into the modern era, with practical updates to the classic v-twin engine and striking looks that are hard to date, if you’re not familiar with the bike. Compared to most Japanese sportbikes of the time, the styling is decidedly wild, and the silver/red/blue graphics would look great on a modern bike like the Panigale. 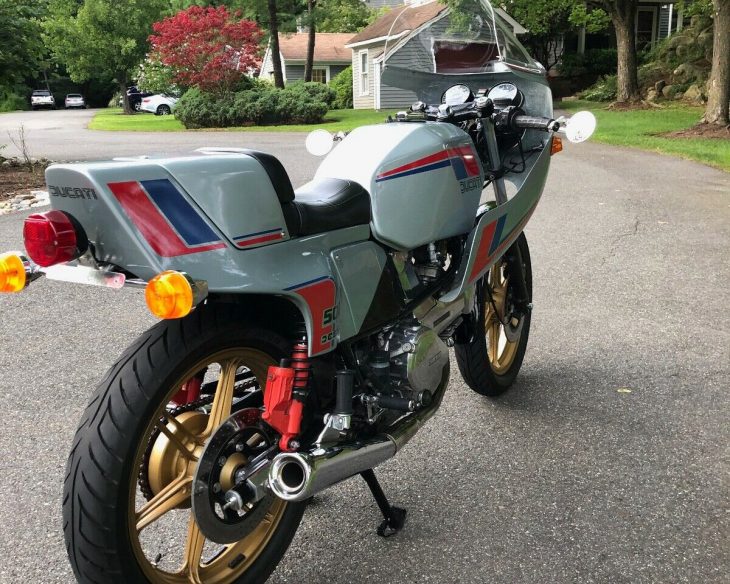 Ducati’s old bevel-drive v-twins were designed to perform and gorgeously hand-crafted, but were hideously expensive to manufacture, assemble, and service. Not exactly a design suited to a company wanting to increase their production significantly. The Pantah took the original two-valve, air/oil-cooled design and updated it with toothed rubber belts to drive the single overhead cams, something that was increasingly common in the automotive world at the time, but largely unheard of in motorcycle manufacture. The Pantah was introduced in 1980 as the 500SL, but quickly grew to 583cc for the 600SL in 1981. Power produced by the 499cc twin was a modest 50hp, but engine loved to rev and the Ducati was light compared to rivals at under 400lbs dry. This switch to the cheaper construction actually brought Ducati’s Desmodromic valve actuation to the masses, since the older bevel-drive bikes mostly used traditional valve springs, and it was only the Super Sport models that featured the race-bred technology. From the original eBay listing: 1981 Ducati Pantah 500SL for Sale

It has come time to sell the last of my collection and this one is it. I’ve owned this bike since about 1996 or 1997 and have meticouluslly restored the bike with all original parts or the best parts available. I use the word restored a bit lightly here. The only 2 parts that have not been restored due to there great condition is the main frame(original paint) and front forks(original paint). Everything else has been repainted, refinished, restored, etc..

First 2 pictures are from a amateur photo shoot with bike from about 2 years ago.. The rest are from last week.

I’m offering this auction at very low starting price with NO RESERVE and hope it goes to the best home possible. Title is clear.

I know I’m leaving out a bunch of things but its just to much to list!

Motor has been completely disassembled and gone through adding all new gaskets and adjustments. All work on bike has been performed by Moto Borgotaro in Brooklyn New York and Moto Pistole (now North Motorcycle). Everything except the blue paint and decals were performed by them. You can check out there websites for there caliber of work.

Anything and everything you can think of has been redone on bike. Please ask any questions.

I will include in sale many extra parts and original owners manual and service manual. Vintage magazine with Bike of the Year from 1981.

Here is a link of the start up and walk around. Also you can see my other vintage Ducatis that I sold in the last few years…

I reserve the right to end this auction early due to its for sale locally as well.

Shipping is the responsibility of winning bidder. I can assist within reason.. 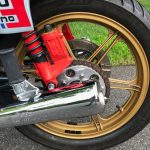 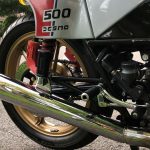 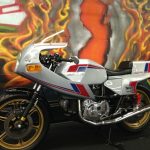 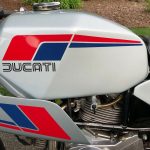 This one is about as nice as you’re ever likely to find, and values of these 1980s bikes are definitely increasing after years, but although this is a No Reserve auction, the starting bid of $11,498 is both oddly specific and very high for a Pantah.. Ducati’s original “round-case” v-twin may be one of the most beautiful engines of all time but, while tower shafts and bevel gears may be a very precise way to operate valves, they sure aren’t an economical one. Think about the shimming that must be done during assembly; it’s a very labor-intensive way to construct an engine, not at all suited for mass-production. The Ducati Pantah that followed showed the way forward, and is the grandfather of all modern Ducatis. Introduced in 1980 in 499cc form as the 500SL, it grew to 593cc in 1981 as the 600SL seen here. The styling is very distinctive, like nothing else being produced at the time, and handling was up to the standards expected of Ducati. 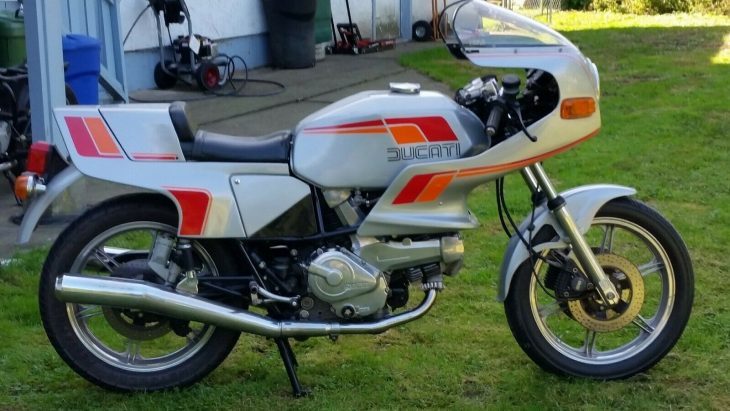 But before the Pantah, there was one of Ducati’s most infamous misfires, corporate thinking that led to a failed experiment with parallel twins. It all made so much sense: a parallel twin has similar two-cylinder character and compact dimensions that improve packaging, while a single head saves production and material costs, as well as weight. What could go wrong? Well basically everything. The 500GTL might have looked like a winner on paper, but pretty much rejected everything that fans of the marque loved, and was famously unreliable as well. Luckily, Ducati engineer Fabio Taglioni had continued to develop a new v-twin, just in case… 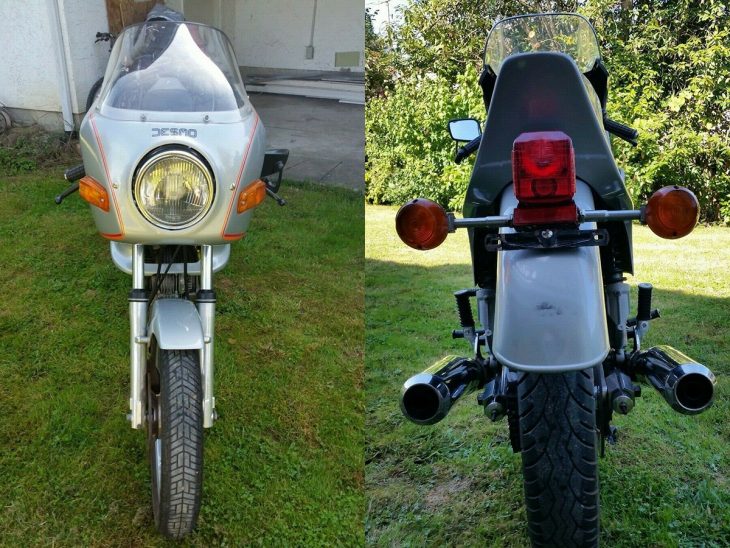 The new engine incorporated toothed rubber belts to drive the overhead cams instead of tower shafts and gears, or the chains that were popular in other high-performance motorcycles of the period. This made assembly and mass production of the new engine a relative snap, but passed the costs on to the owners: regular belt changes are a traditional part of the Ducati ownership experience, although that particular maintenance chore can be handled by a home mechanic, and even the two-valve Desmo valve adjustment isn’t all that difficult. On the plus side: the push towards standardization and mass-production also meant that Ducati’s signature Desmodromic positive valve actuation now appeared on all models, and not just their SuperSport machines, giving the 600SL pretty good power for a two-valve v-twin of such small displacement.

From the original eBay listing: 1982 Ducati Pantah 600SL for Sale

If you are a collector of classic and iconic sportbikes – or would like to become one – here is something you might want to investigate. The Ducati 600 SL Desmo “Pantah” was the first of the next generation of Ducatis, powered by an updated L-twin desmo motor with valve actuation done via toothed rubber belts instead of the traditional bevel drive. The belt driven valvetrain was instrumental to production volume for Ducati, as the older bevel drives required a great deal of time-consuming, skilled adjustment during assembly. Belt driven valves made true mass production a reality.

Was in storage for the past 10 years (with no petrol in the tank). Will need tune up/oil change. Carburetor was rebuilt 2 years ago.

These used to be very affordable bikes, but the seller is correct: these are now definitely collectible and, considering how many were made, you don’t see them up for sale all that often. The $10,000 Buy It Now price is ambitious, but maybe not totally outrageous, considering the general condition. However… this one does have 69,000 miles on the odometer, which means it definitely isn’t low-mileage. The Pantah engine is pretty rugged, and parts should be available to maintain or restore, or you could even box up the original engine and build a hot-rod 900 that should bolt right in with just a few modifications… 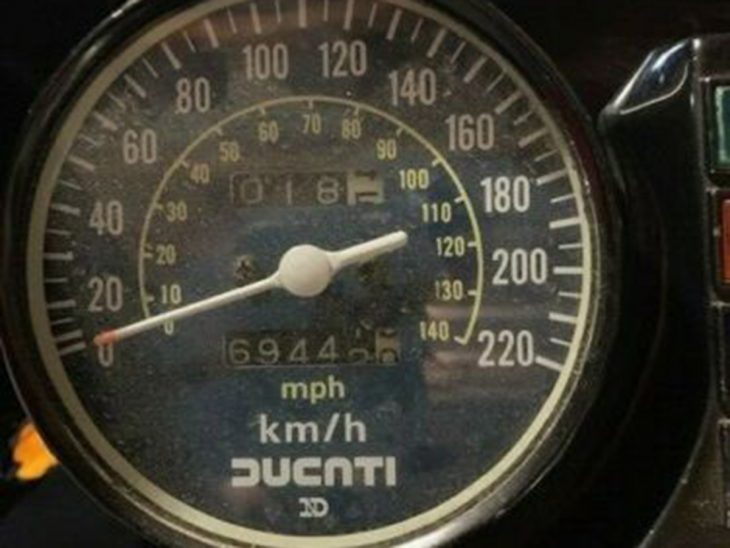