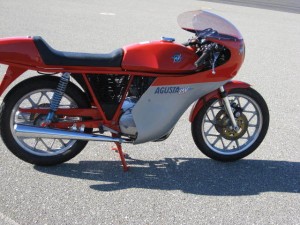 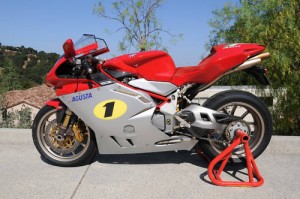 Motorcycles have sure come a long way in the past 30 years or so, haven’t they?  These two beauties represent MV Agusta’s past and present and are currently on Ebay and up for the taking.

First up is this absolutely mint 350 Ipotesi.  If my Google translation is correct that means “hypothesis”.  Maybe not the most catchy name I’ve heard but I can let it slide.  Who cares about a name when you have a bike with that classic cafe racer and GP inspired looks. I did come across an Italian Wikipedia page (I know, not the most reliable source) and it claims Ipotesi production ran from 1974 to 1977.  So, I guess there is the possibility this is actually a 1974.  The page goes on to say the Ipotesi was built to bridge the gap between MV Agusta’s race bikes and their street bikes.  Basically the same marketing we see today with current motorcycles.  This model may be one of the last bikes Count Agusta was involved in producing, as he died in 19971.  His death apparently delayed the release of the bike for over a year.  Soon after MV Augusta began a slow decline with the doors eventually closing in the late 70’s.

Enough with the depressing stuff  because this bike is beauty.  I’m not really into the retro scene but this bike definitely has a certain flare to it.  I wonder what it sounds like with the open carbs.  Is there some nice intake noise to go along with the exhaust note?  I freely admit those tires scare me though.  Thank goodness technology has moved forward in that area. 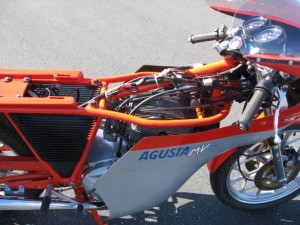 The auction is up and running and there appears to be some interest with several bids placed already.  A reserve is set and I honestly wouldn’t have a guess on it’s value.  All I know is that it appears to be an absolutely clean example of 70’s era sport bike technology.

Reliving the 70’s not your thing?  Well how about a F4 Ago?   Only 300 were produced and this is number #269 of the bunch.  According to MV Agusta’s website the Ago sold out back in 2005.  Of course the Ago is a tribute to long time MV Agusta rider Giacomo Agostini.  Of course it caries the tribute paint scheme.  To go along with that MV Agusta added some carbon fiber, some titanium treatments and some more subtle details to the bike to make it stand apart.  A corsa exhaust and erpom chip give the engine a little extra juice to top things off.

A little about the bike from the auction:

I am the 3rd owner of bike #269 of 300 build worldwide and purchased it about a year ago, from a member of the www.mvagusta.netwebsite. The bike is in pristine condition with 7,353 miles and comes with all the stuff originally shipped with it including, stock and RG3 exhaust (currently on bike), MV overalls and certificate of authenticity, signed by Giacomo Agostini (Ago). The bike also has installed: MV Corsa carbon fiber wire harness cover, heal guards and rear fender and and plate holder, plus has a HID light kit installed from emoto and a clear bra on upper fairing and mirrors. This bike was featured in Cycle World Nov 2008 issue (copy comes with the bike) with Ago and Phil Read (ex-MV racer) at which time he had Ago sign both stock heal guards, which also come with the bike. It also comes with two covers (one new) and a set of spare mirrors that the prior owner bought. Bike is located in the San Francisco bay, can be viewed by appointment, but not ridden. Bike is available for local sale, thus auction may end early. 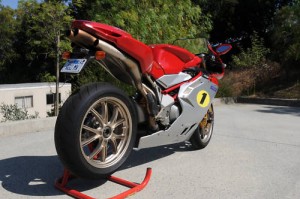 This one has been lurking around on Ebay for a few weeks now.  I’ve followed it and I thought it had sold at one point but it must have never met that pesky reserve.  I’m guessing high teens low 20’s for the reserve.  If you are in the mood for a little modern retro

If you need more of an Ago fix check out this Youtube clip of Agostini in action.  It has some pretty nice footage of him in action.