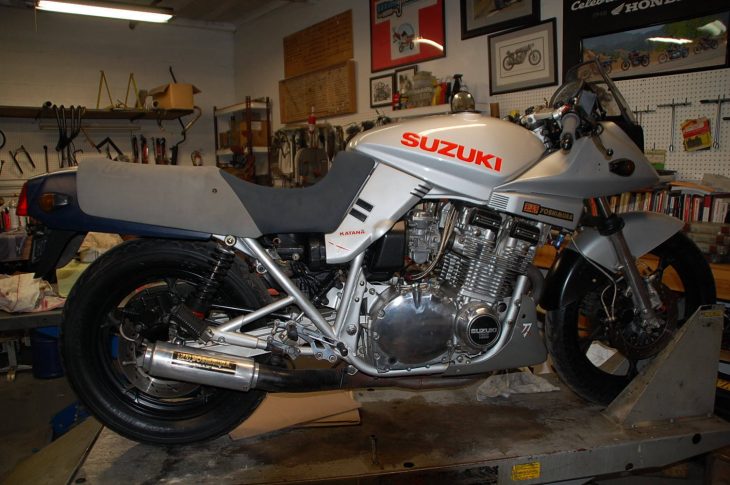 In ancient Japan, the Katana was known as the samurai sword. Smaller than the long broadswords of the day, the Katana changed the art of Japanese warfare; quick to draw, the lighter blade could strike quickly before the enemy could react. When victory depended upon response times, the Katana became the weapon of choice. Sadly, such artistry was eradicated by the rise of firearms technology. But for a period of time, the Katana sword ruled the battlefield. 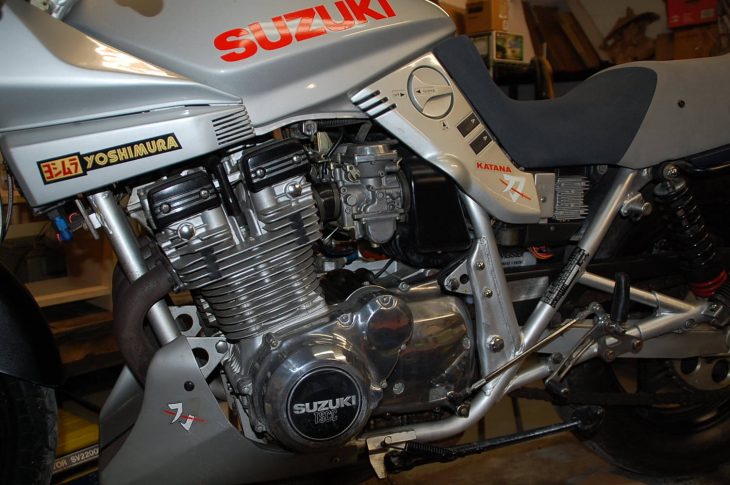 Like the samurai sword, the Suzuki Katana could be written off as a bygone relic of past times. With its air-cooled four cylinder lump displacing 1000cc and breathing through CV carbs, this twin-shock, mild-steel backbone chassis beast would soon be decimated by giant leaps in performance and technology: liquid cooling, fuel injection, single shock suspension with rising rate linkages, aluminum perimeter frames. But for a meteoric moment, the Katana ruled a world that had never seen the likes of its power and beauty. Using a new design language penned by creator Hans Muth, the Katana oozed angular lines and purposeful design. But it was not simply cosmetic; the tiny front fairing and upright windscreen reduced front end lift by a considerable amount (decades before GP machines started using wings). The power plant was more narrow than its predecessors, and churned up an estimated 108 ponies – a magical number in 1982. The riding position was forward canted, expecting a committed rider. The result was a machine that looked like no other, and performed like no other. 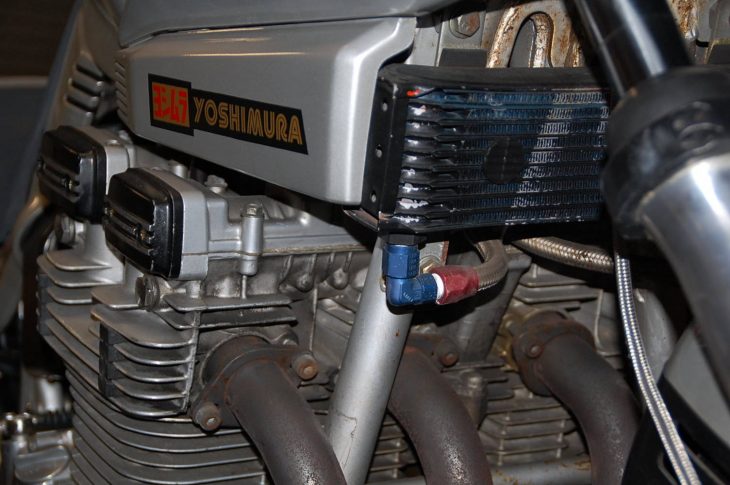 From the seller:
MUSUEM BIKE SOLD AT FIXED PRICE,
RARE UNCRASHED LOW MILES TIME CAPSULE SUZUKI KATANA 1000
1882 MODEL, DRY TANK, ZERO RUST AND SHINEY INSIDE,
THE CARBURETORS WERE DRAINED OF ALL FUEL BEFORE STORAGE IN 1984. THIS BIKE WAS KITTED WITH FACTORY YOSHIMURA REAR SETS, YOSHIMURA OIL COOLER KIT, YOSHIMURA EXHAUST SYSTEM, THE REAR SHOCKS ARE S&W 13″LONG. IT HAS THE ORIGINAL DUNLOP 391 RACE COMPOUND ELITE TIRES STILL. THE SEAT IS SWEET WITH NO RIPS OR TEARS. SOME ONE INSTALLED FLUSH STYLE TURN SIGNALS AND THE STOCK REARS TURN SIGNALS ARE INCLUDED IN THE SALE. THE BIKE HAS 19,559 ORIGINAL MILES 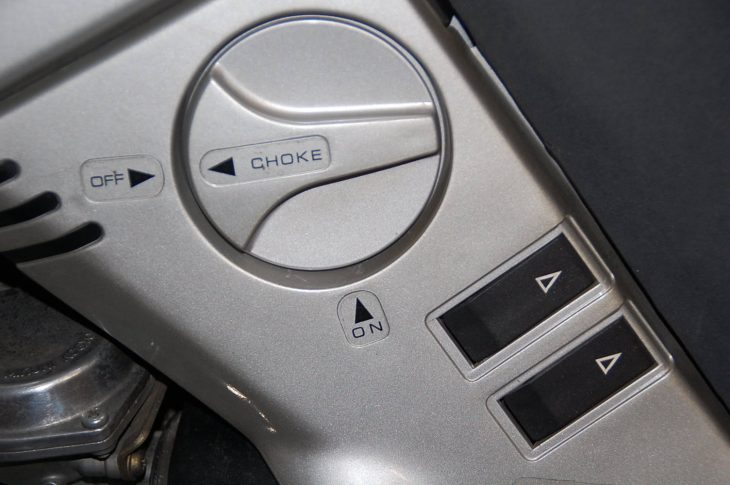 Suzuki produced several Katana models in varying capacities and with different interpretations of the same, angular design (including a pop-up headlight version in 750cc). In an ironic twist, the US saw the smaller of the two one-liter models: The original 1000cc version in the US was actually a de-stroked GS1100 motor to comply with the 1025cc limit for SuperBike racing (Wes Cooley, for one, had good success racing the the Katana). Markets outside the US had access to the original 1100cc motor. 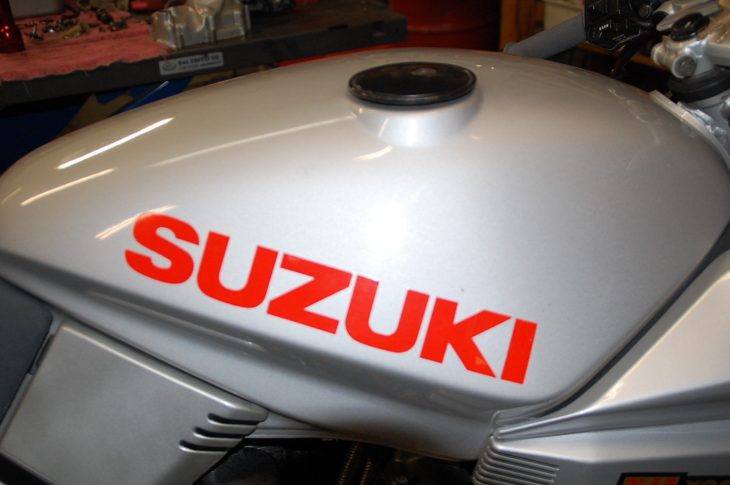 More from the seller:
The Fuel tank has two scratches, not dented or dinded, see photos*** this is the only flaw on the whole paint of the bike. Clear Oregon title from a dealer. You will never get the opportunity to find a better specimen of Suzuki race history to own. check out the specification card on this bike in the photos. NOTE I have never started this bike since I received it from the Sale. It’s a museum piece not a toy for children or commuters 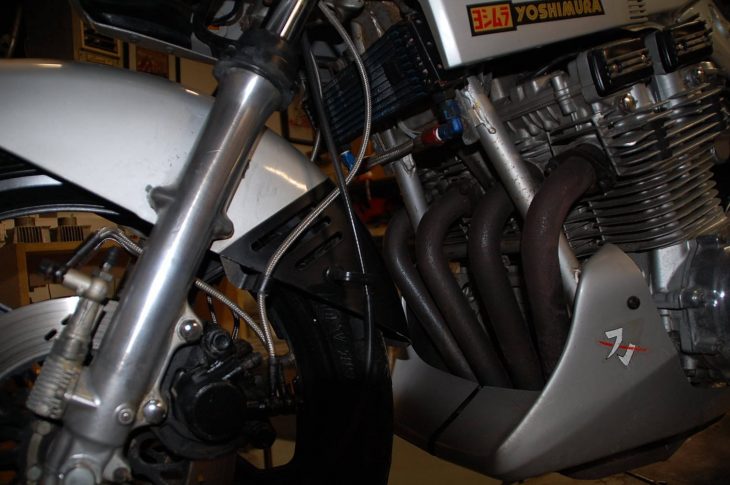 Katanas have steadily risen in value over the years. Perhaps it is the 35 years that have elapsed since this iconic form stunned international audiences. Perhaps, despite the instant-relic status a year or two later (think 900 Ninja or even Suzuki’s own groundbreaking GSX-R), the Katana continues to impress because it made a statement. It changed the nature of warfare – if only for a brief moment – to impress with looks as well as brawn. This example, while emerging as a museum denizen, actually has nearly 20k on the clock. It certainly is not fully stock. The seller is looking for $9k OBO. You can check out all of the details here, and then jump back to the comments section and let us know what you think. Good Luck! 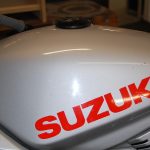 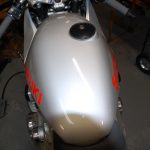 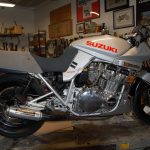 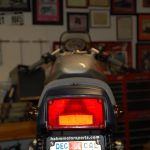 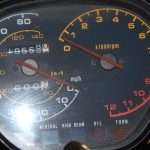 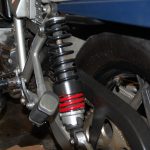 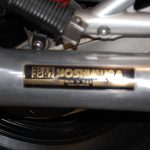 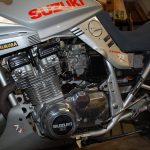 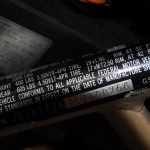 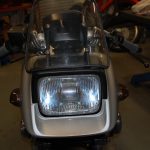 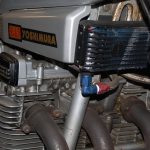 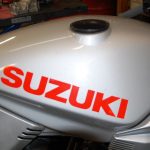 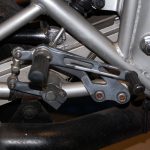 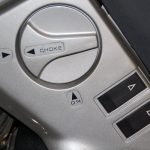 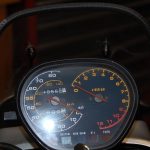 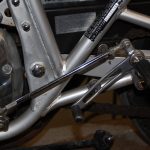 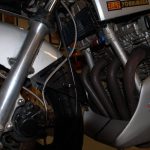