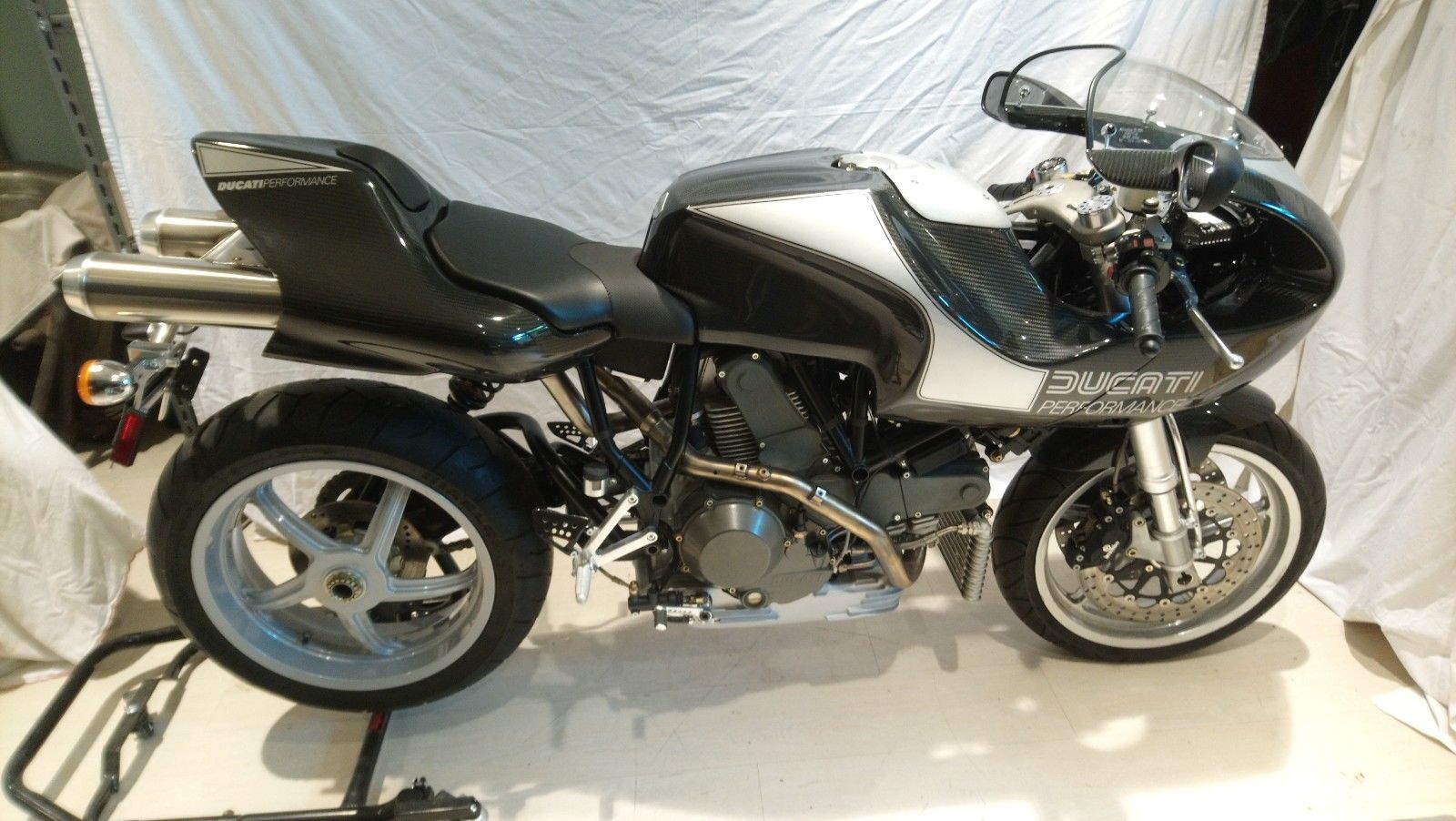 Given the futuristic Star Wars appearance of the bike – as well as the innovative internet-only sales model – I thought the reference to the movie franchise fitting. But what is more amazing is that this bike is purported to be Number One of the two thousand examples created (1k each as 2000 and 2001 model years). With zero miles, a nearly zero serial number and all of the usual fanfare that goes with this rebooted homage to Mike Hailwood, this particular example is rare, special and unique. It is also predictably expensive. 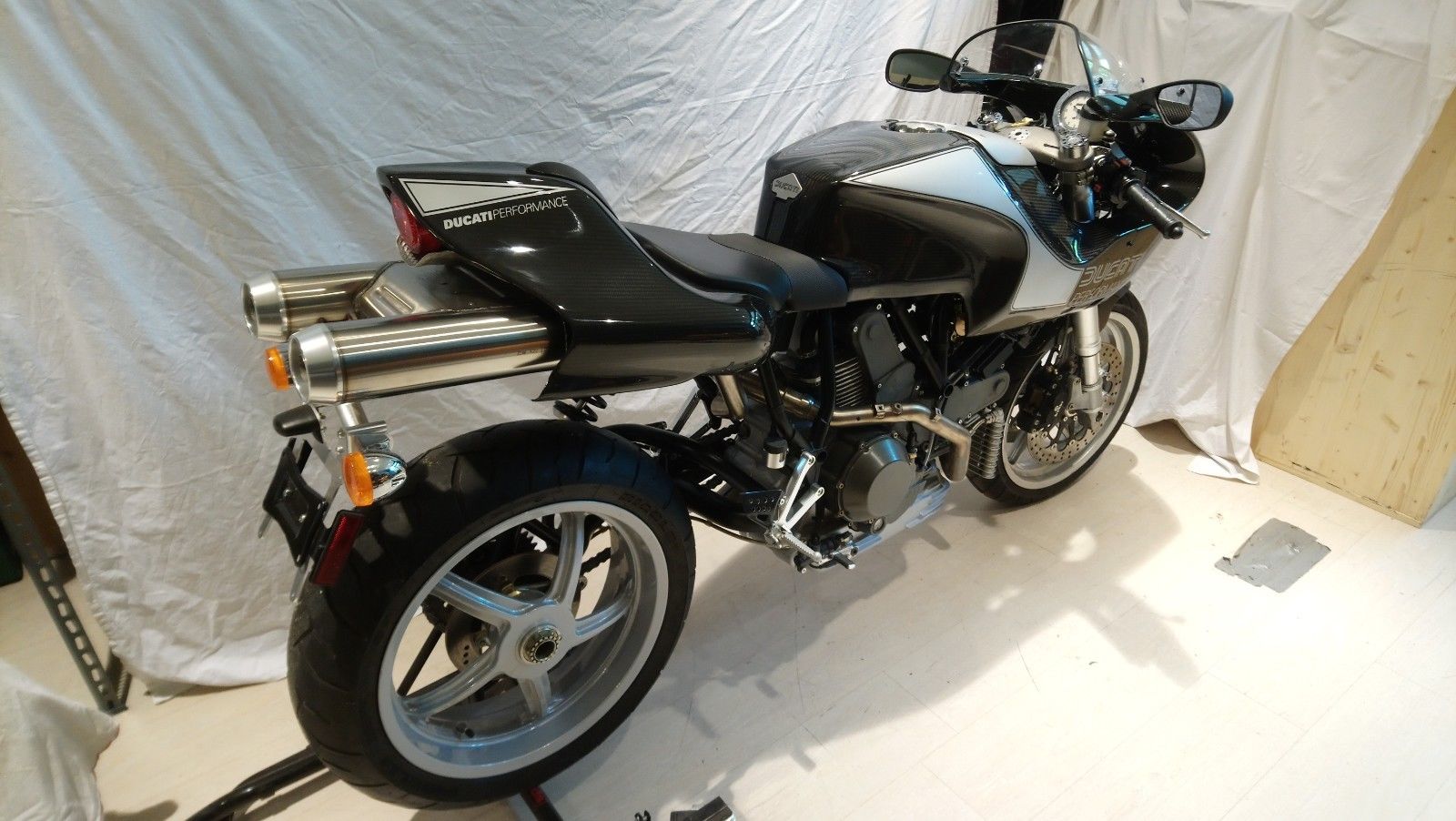 The MH900e is perhaps the most recognizable of the Pierre Terblanche designs. The “e” in the nomenclature stands for evoluzion (evolution in US-speak), referring of course to the Mike Hailwood replicas built on the 900cc bevel drive platform of the 1980s. Taking the spirit of the original but updating it to the new Supersport/Monster/Sport Classic desmodue foundation, the MH900e was part replica, part homage, and part new direction for Ducati. Power was via the standard 900cc, air-cooled, two valve workhorse of the Ducati lineup. Ditto with the gearbox. Major components aside, the bodywork, fuel tank, exhaust and asymmetrical trellis swing arm were pure MH900e. So, too, was the riding position with a long reach to the low bars. But comfort was not the design goal. Creating a sensation was the goal – and on this front Ducati hit one out of the park. Nearly 20 years later these are still coveted collector machines. And what could be more coveted than the very first one produced? 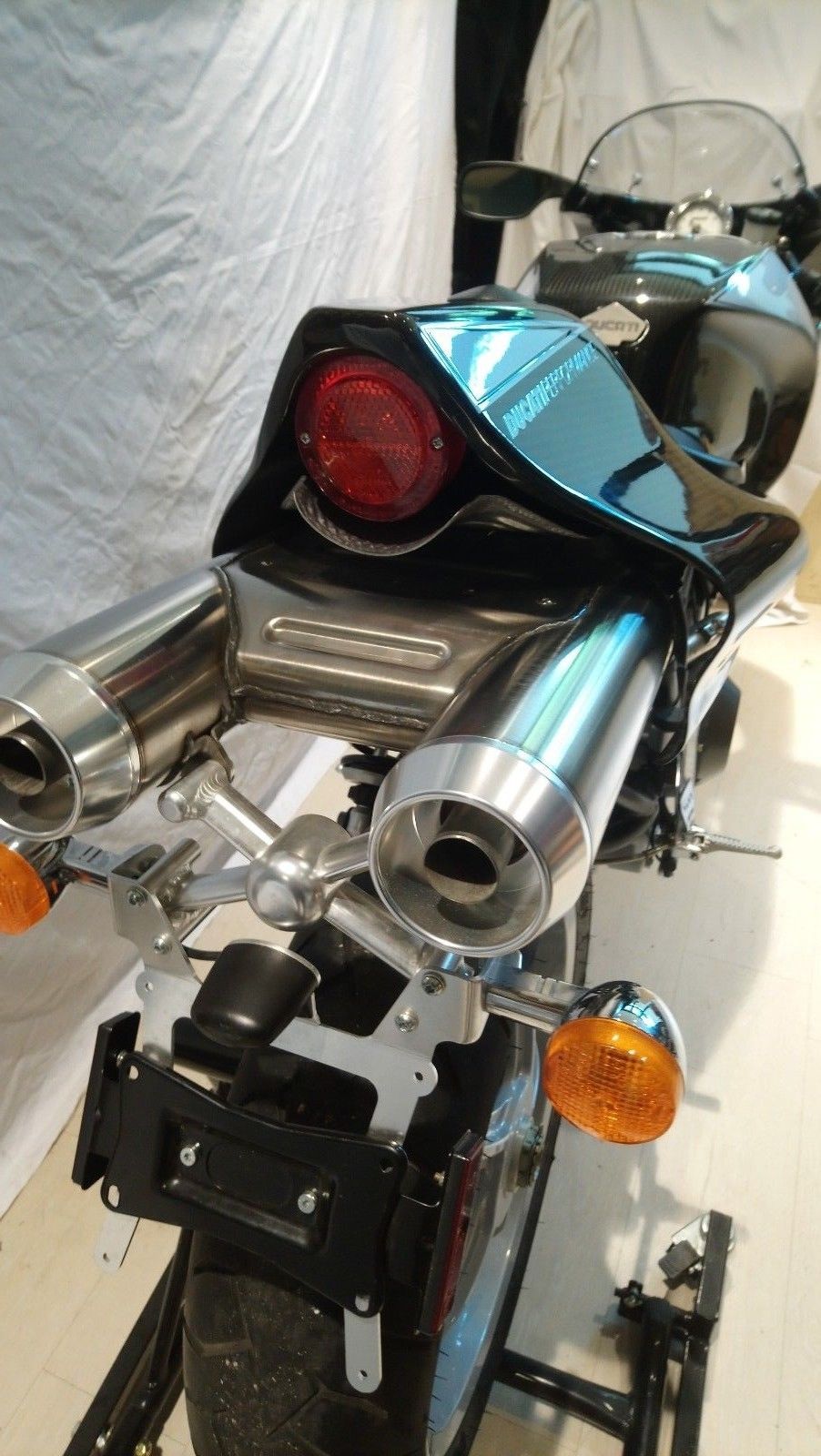 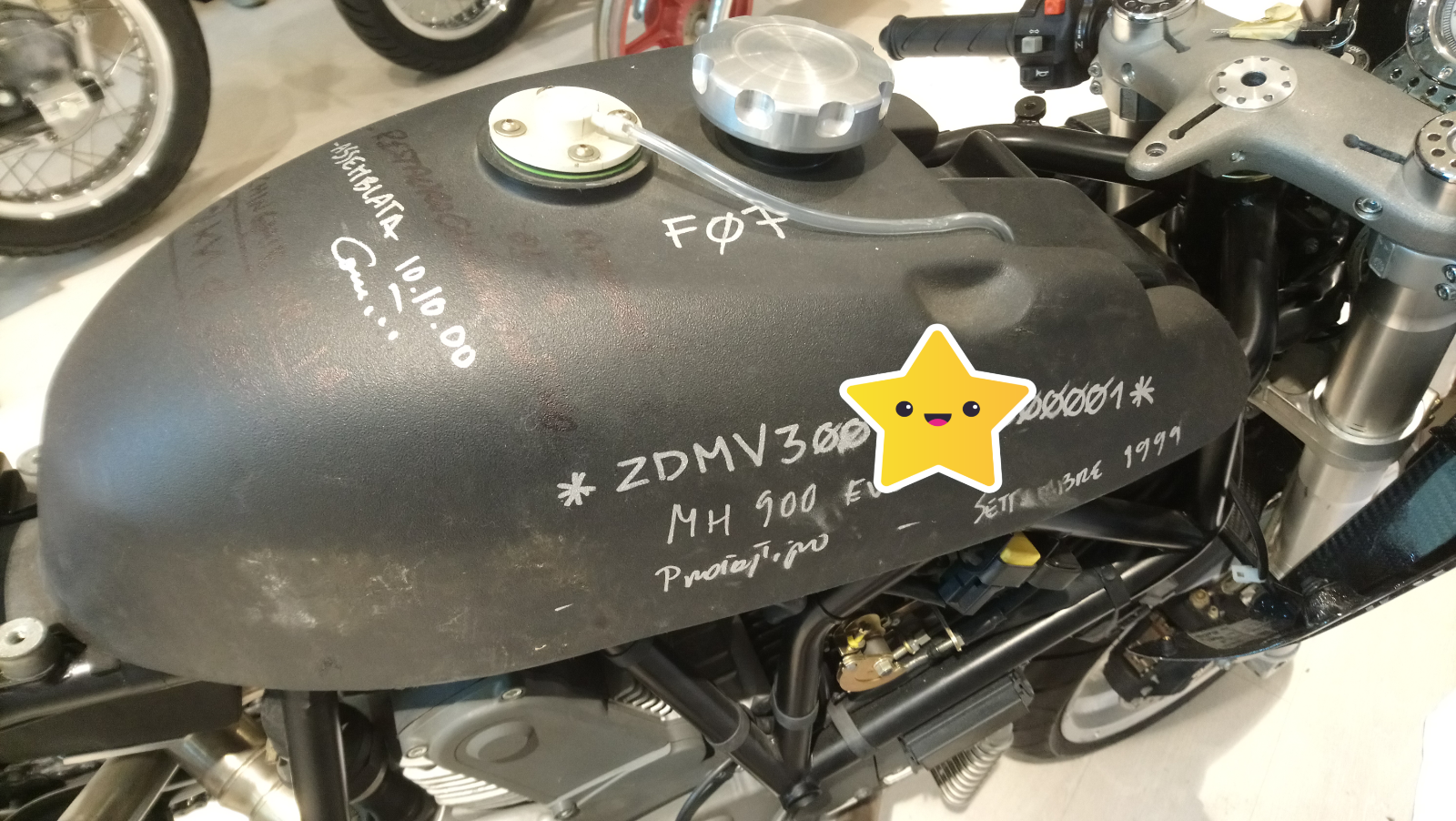 This is not the first time we have seen this particular example. I reference you to Tad’s excellent write up from over a year ago, in which the seller included a significant amount of additional information. Including:

More from the seller:
The bike was acquired from Ducati with a non-production plastic body, painted flat black like the rest of the bike, including frame and swingarm. the exhaust was also custom-made, clearly an assembly try-out, yet perfectly working.

We did a “conservative” restoration on the bike, taking it completely apart, making sure every original bit and piece was kept and restored to obtain this amazing piece. we also decide to maintain the black look that sported when we got it, just upgraded it a bit with proper carbon body and custom-made graphics (Ducati made them for us). 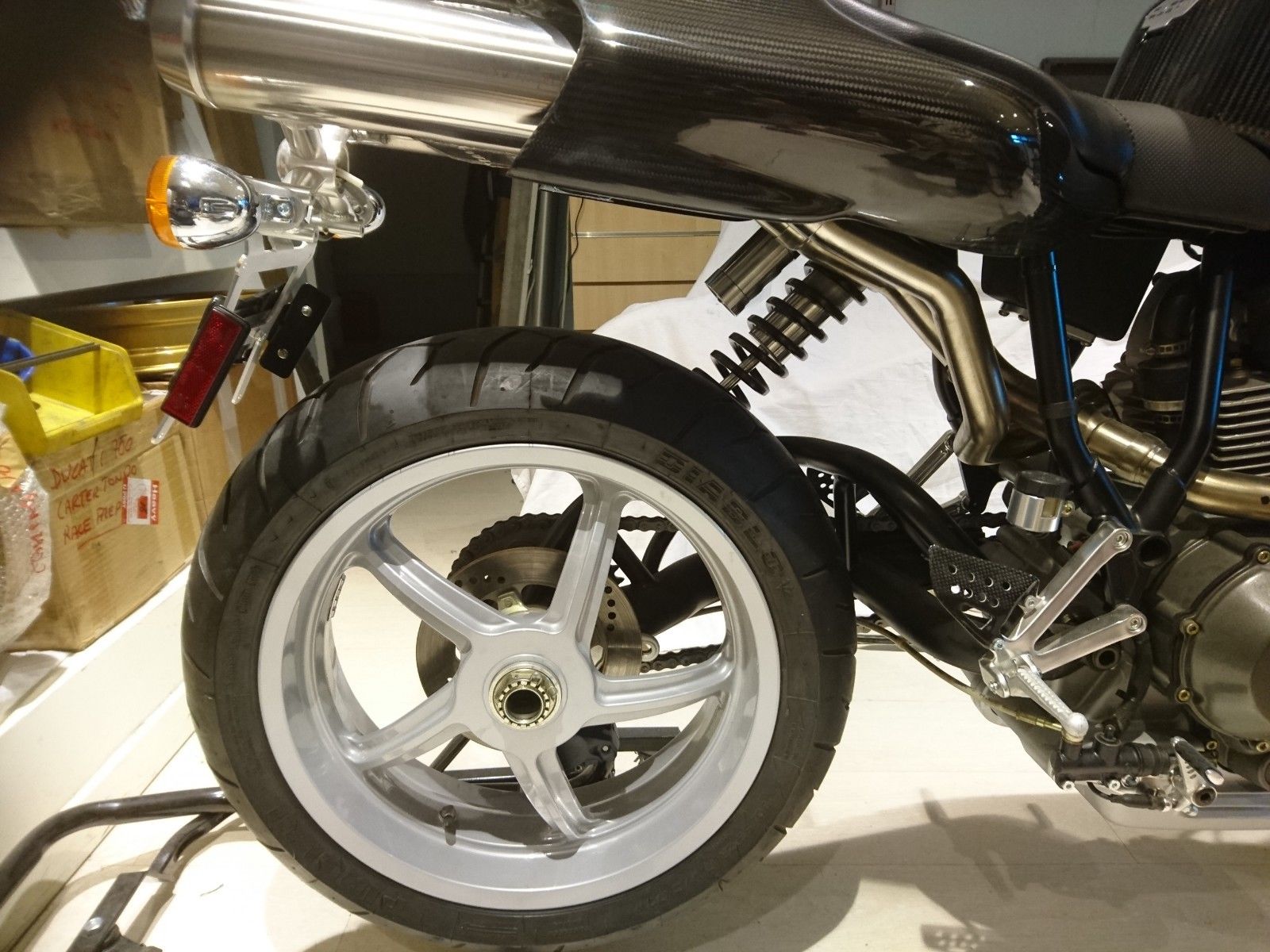 The market for authentic, low mileage (aren’t they all??) MHe models is hot. One only needs to get lost in the details for a few hours to understand why. The swing arm alone is worthy of framing. The oil sump of the Pantah-based engine is recreated to resemble the round case units from the green frame bevel days. The under tail exhaust and intricate snaking of tubes looks impossibly large, yet balances out the aesthetics of the bike nicely. Chrome accents bring light and shine to the shape. Terblanche followed his muse on this one, and the siren song is without equal. If there are whisperings from the peanut gallery they usually form around the relatively low HP of the stock desmodue engine (approximately 75 HP). Comfort is often another low point, although buyers of such exotica rarely mistake such machinery with a Gold Wing. Availability of parts is another fair comment, but such is the price of rarity, and the reason for ever escalating values. Last November this Italian resident was offered with a starting bid of $50k USD and a reserve in place. There were no takers. One year later this same, ultra rare example of Ducati history is back on the block, but this time in a Buy It Now format. The first $49,900 takes the bike (after arranging passage from Modena), although in this round the seller is open to offers. The question remains how much of a premium a zero mile, number one serial number bike can fetch. With MHe examples in the mid to high $20k range, how long would it take for a buyer to earn this back on the investment? Perhaps we are looking at it all wrong here, as this is clearly a collector and art museum filler. At that target, a fair price is not market value but what something is worth to the buyer. Only one owner can claim first status, and this beautiful 1999 Ducati MH900e prototype is your ticket to the holy grail of Hailwood. Overpriced, over hyped or future investment of the century? Be sure and share your thoughts in our Comments section (but keep it civil – no haters please). Good Luck!! 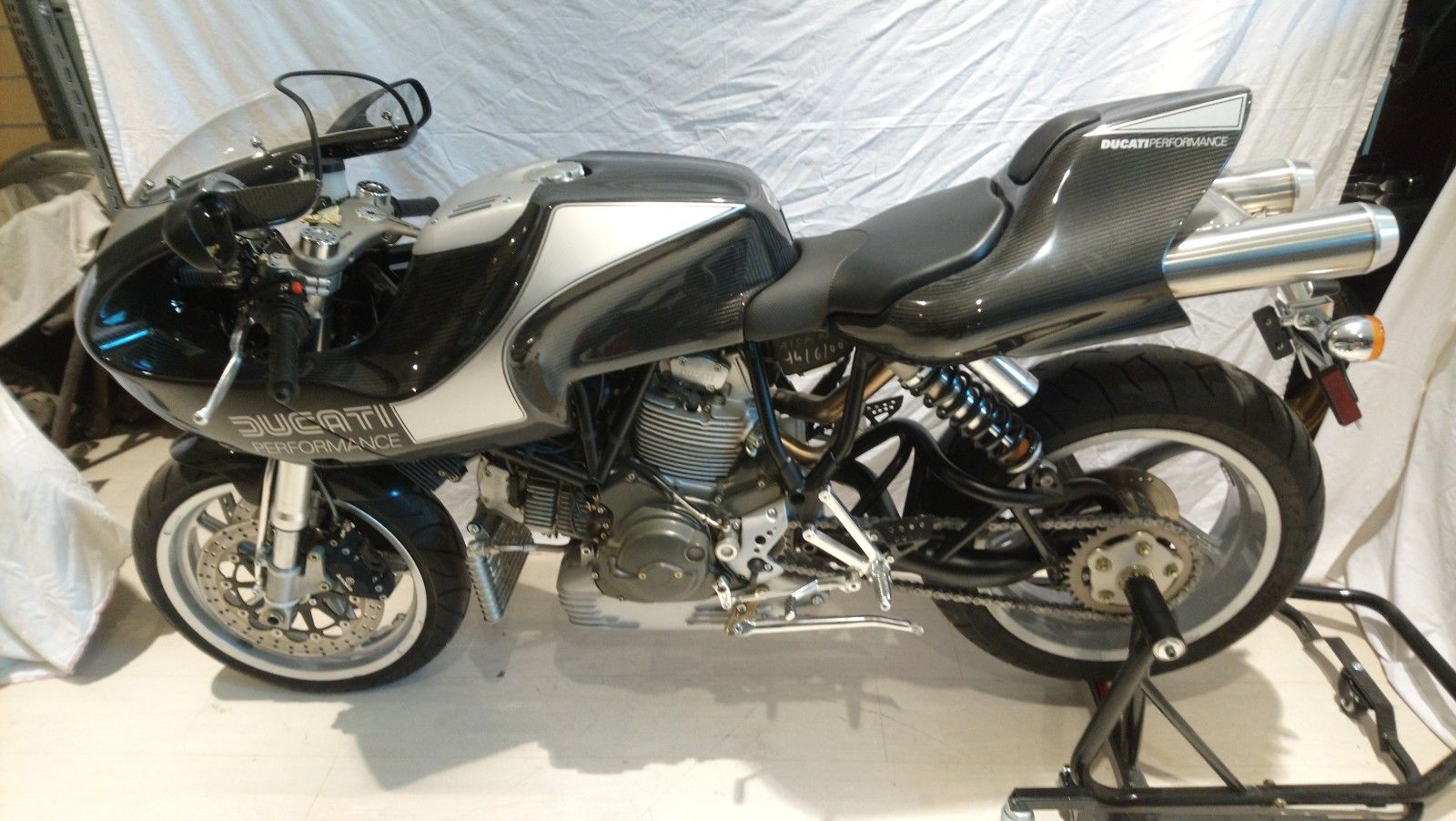 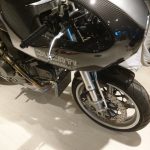 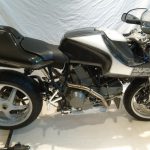 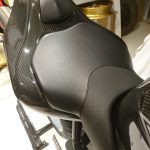 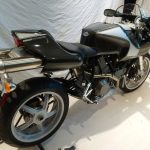 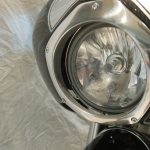 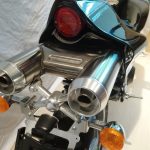 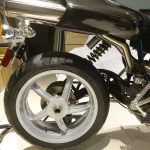 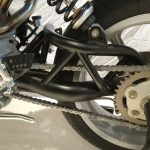 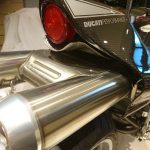 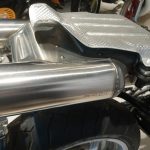