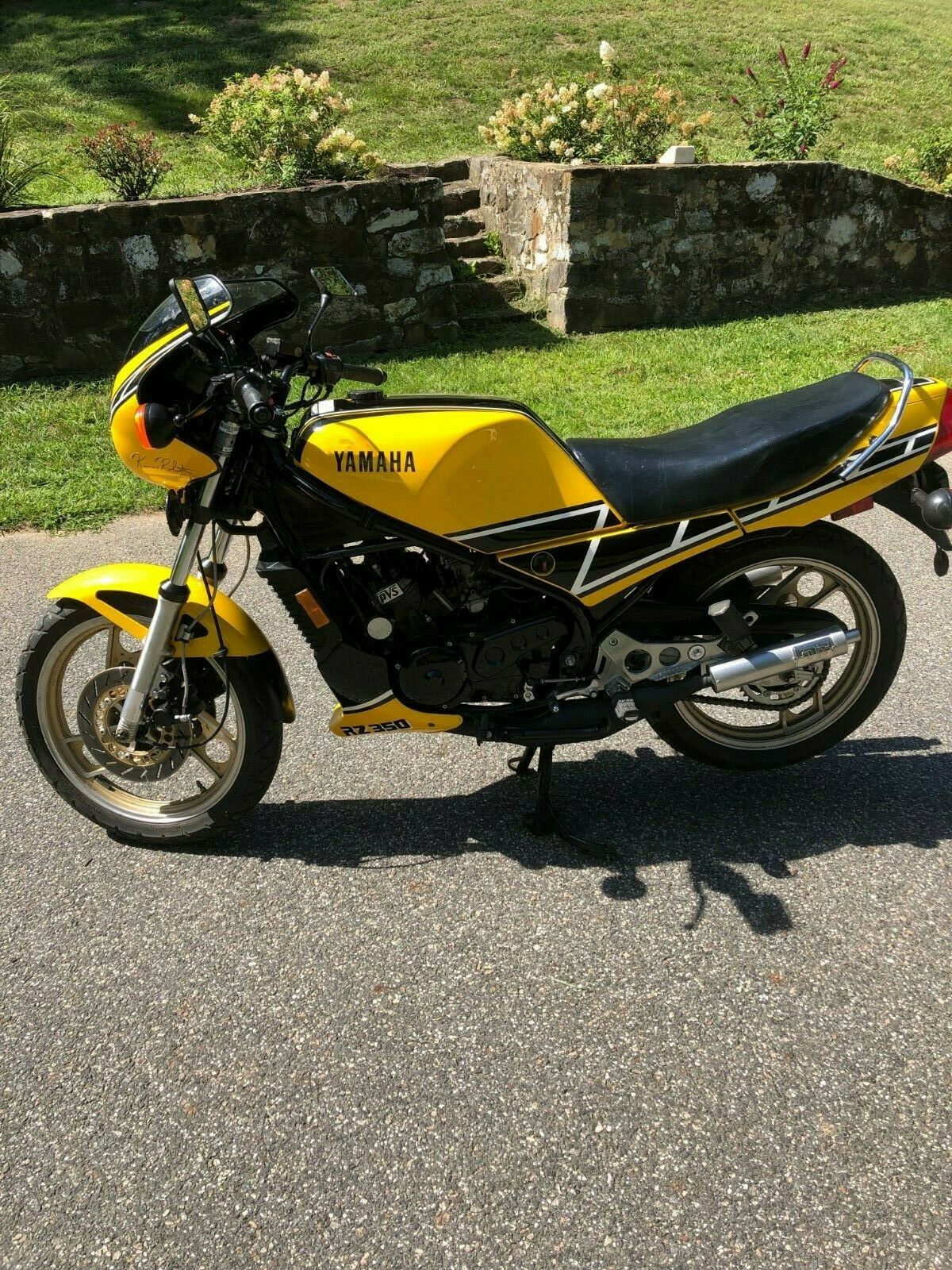 I know that the RSBFS reader loves a good two stroke. And what better to post than a well-kept Yamaha RZ350? The last of the true factory street bike smokers, the RZ was successfully imported into the US – and even California! – for a short while. And so while these are not grey bikes snuck across the border from elsewhere, they are legitimately rare and loved for what they are. And unlike a nearly $20k Gamma or RZ500, the 350 is something that mere mortals can afford, and live with on a daily basis. 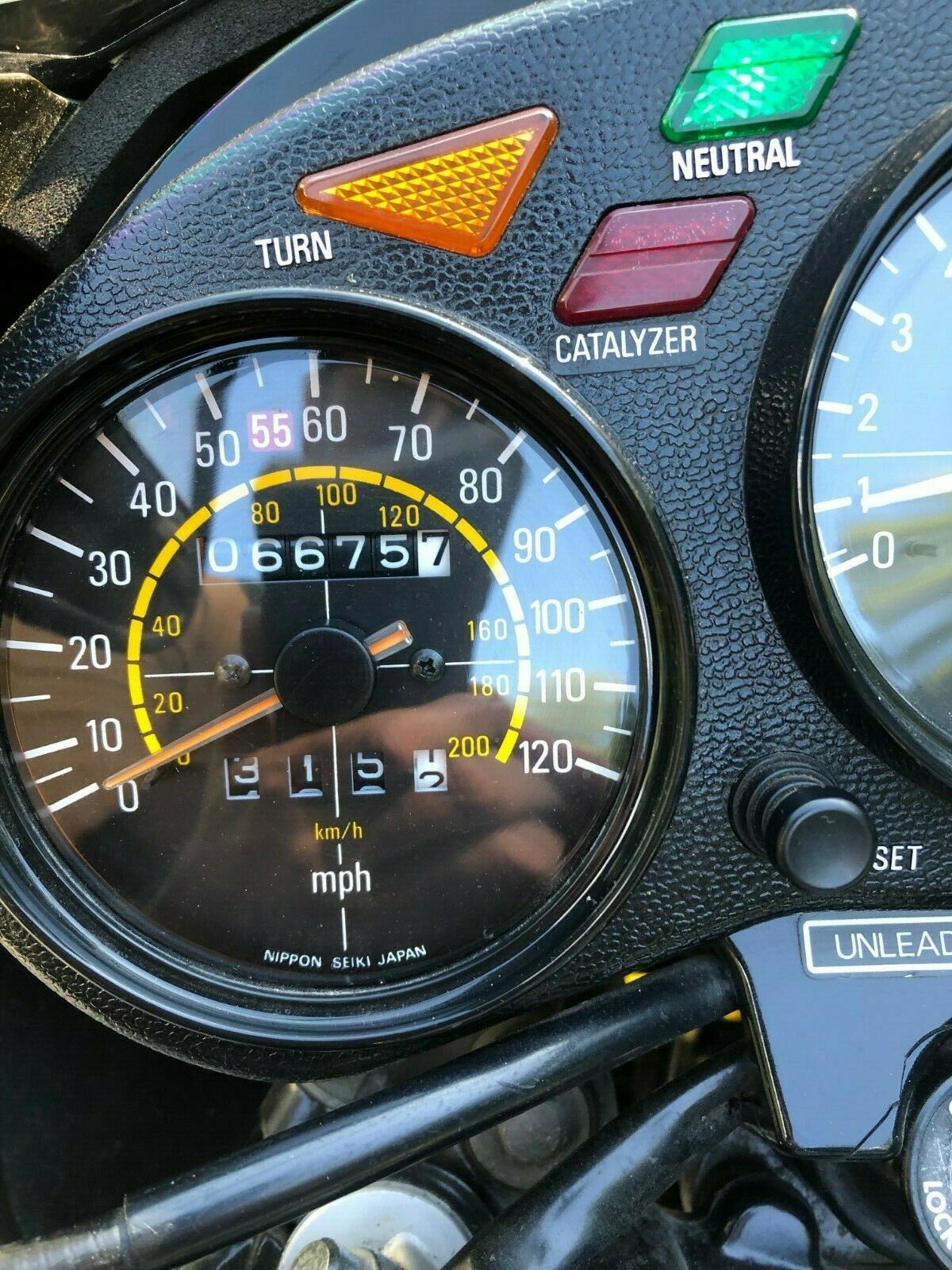 The reed-valve parallel twin that powers the RZ350 is a spiritual successor to the air cooled units on the earlier RD series. Bristling with 1980s technology such as liquid cooling and a power valve exhaust port, the RZ was built to be very robust. Capable of being reliably tuned to significant horsepower increases via compression, porting and bolt-on changes (with requisite carb jetting, of course), the RZ was something that could be enjoyed in stock form and could continue to grow. Today while RZ-specific tuner parts are not readily available (after all, this model has not been sold for many, many years), the aftermarket quad scene is still going strong and there is a lot of knowledge about these motors in that community. 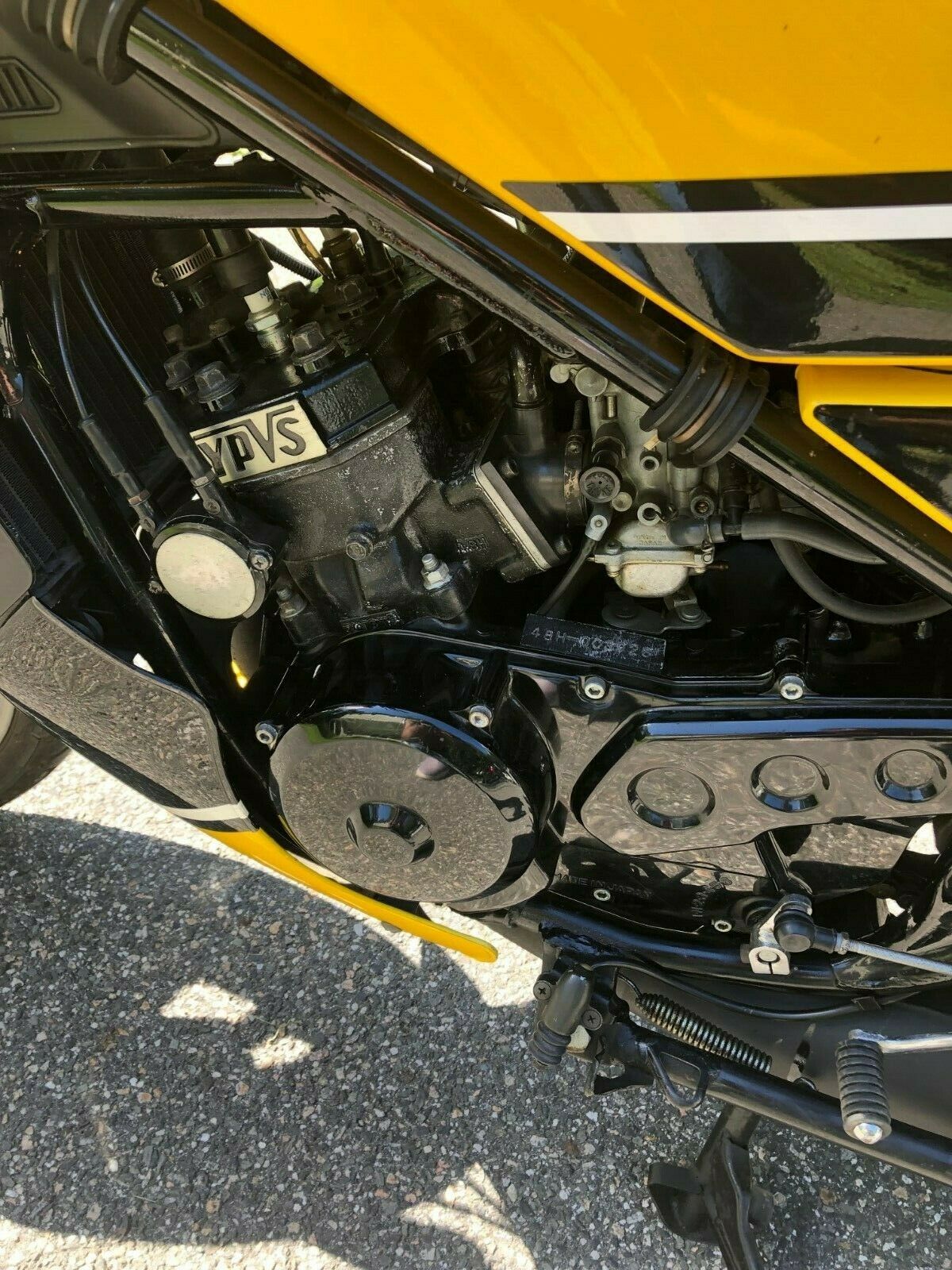 From the seller:
Up for sale today is a very low mileage 1984 Yamaha RZ350. The bike is is very good condition and in excellent running order. It starts on first or second kick every time and everything operates as it should. There are 2 small dents on the left side of the tank about the size of a quarter and nickle respectively that someone touched up and the rest is normal wear in my estimation. The paint shows very well and the only no oem items on the bike are the mirrors,exhaust and air filter ( has a K&N on it now but I have the original airbox that goes with the bike. 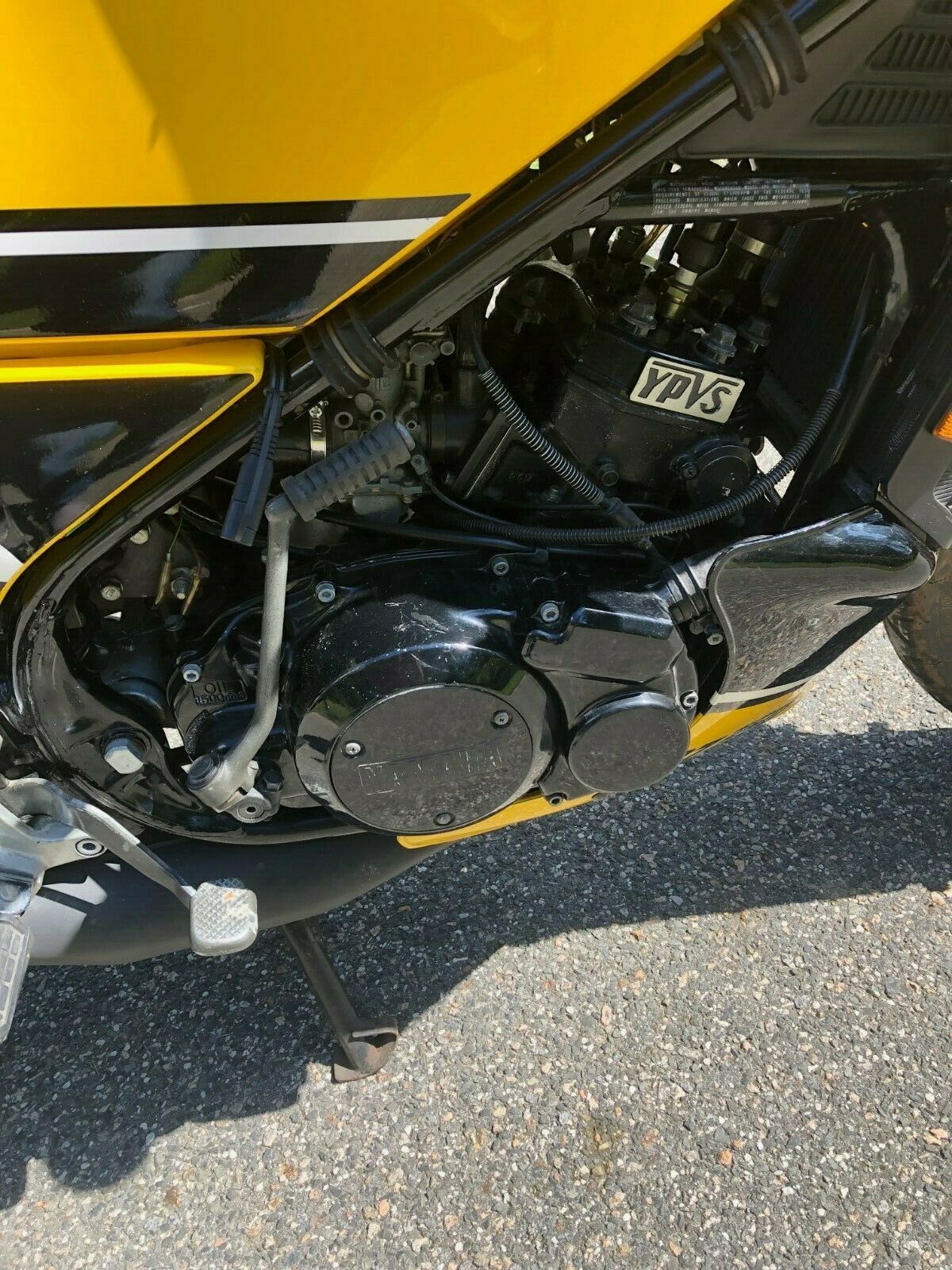 The last several RZs that we saw pass through eBay showed strong bidding and a significant amount of action. That speaks to the popularity of these bikes. This is especially true for those that are in exceptional condition and include the rare – yet power robbing – original parts such as the catalytic converter exhaust pipes. This particular bike appears to be in good condition, and sports period-correct mods such as the airbox and expansion chambers. The seller notes some minor damage to the tank (not particularly well shown in the pics) and non-standard mirrors (the original RZ items are round). But with lower mileage and an overall clean appearance this could be a good buy if everything else checks out. The going rate for a great RZ these days tops the $10k mark, so set your barometers accordingly. This one sits just below $6k with only a few days to go. Check it out here, as we don’t often see these bikes hang around long at auction. If your’re itching for something to collect, something to ride, something to hot rod – or maybe all of the above – you’d be hard pressed to do better than a RZ350. These are still relatively affordable, and all the fun you remembered. Good Luck!! 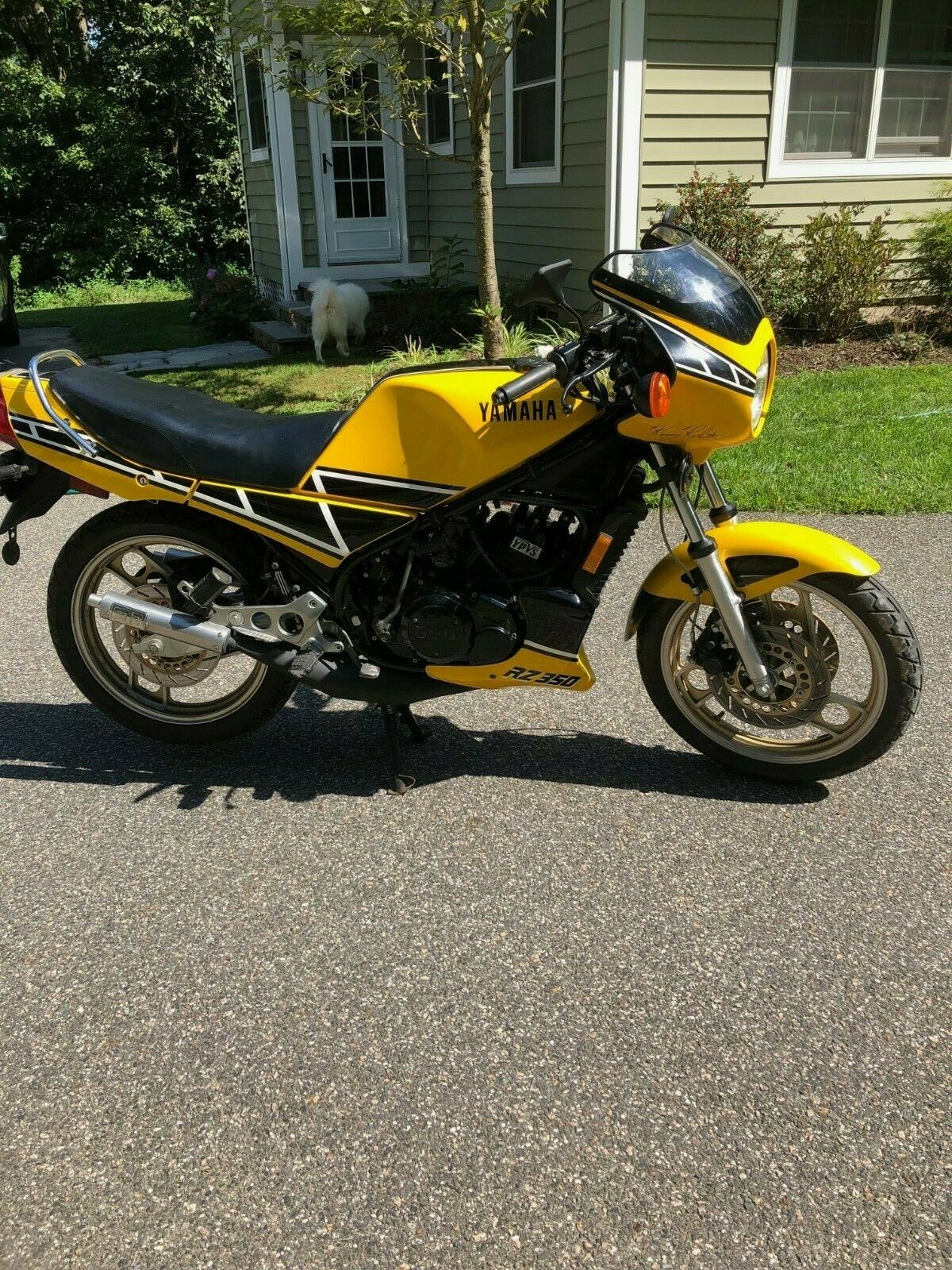 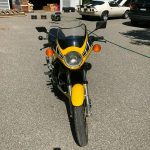 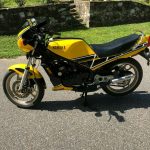 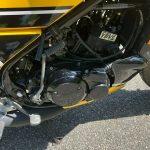 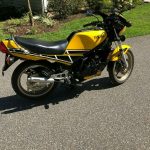 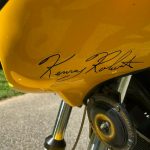 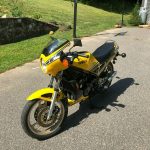 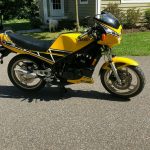 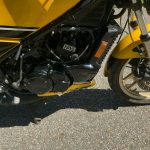 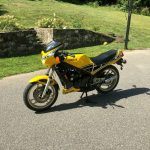 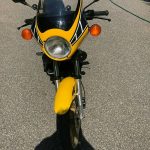