AMA’s Formula Xtreme is now defunct but this Honda is not. It is a 2007 Honda CBR 600RR racebike that was “prep-ridden” by Aaron Gobert and has lots of go-fast goodies. Is :

You might ask, what qualified as a Formula Xtreme machine. Well, here is the answer from Wikipedia:

In order to be successfully entered in a Formula Xtreme event, motorcycles must be homologated. They must also be of a model type that is designed and legal for street use in the United States and is available from retail dealerships in the U.S.

Although liberal by the standards of the other classes in the AMA Superbike Series, Formula Xtreme rules still limit the modifications that may be made to a motorcycle to be entered in a Formula Xtreme event. The rules specify what changes are and are not permitted, including modification or replacement of various engine internals, transmission components, and other non-powertrain components of the vehicle such as the suspension, wheels, frame, swingarm, bodywork, wheels, etc. The rules also specify mimimum weight limits, allowable fuel types, which production components must be left in place and rules for availability of non-stock components from the manufacturer. Lastly, the type of engine (displacement and configuration) is governed by a set of guidelines that attempts to bring technical diversity to the class by establishing technical limitations that allow different technologies to remain competitive. For example, air/oil-cooled twin-cylinder engines are allowed a larger displacement limit. There are also differences in allowed modifications to engine internals depending on the engine configuration, again to encourage technical diversity in the class by ensuring that motorcycles with different engine configurations remain competitive.

Formula Xtreme has since been replaced by the AMA Daytona Sportbike Championship. 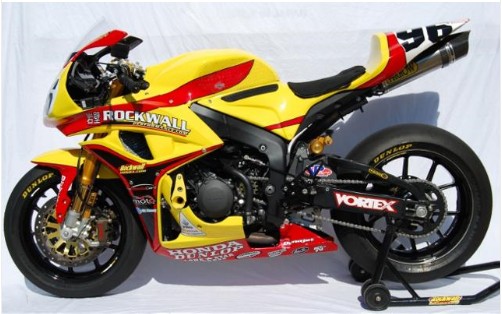 Additional information from the ebay ad:

My opinion is that this is surely a fast track bike and has lots of go-fast goodies. However, think I would rather have the Aprilia racebikes that were recently offered:  https://raresportbikesforsale.com/ama-pro-daytona-aprilia-rsv100r-race-bike-for-sale/