Update 11.11.2011: Back on eBay but with new pictures and a lower purchase price. eBay indicates the last auction went in the $27k range. Thanks to everyone who emailed that this one was back online. Links updated but new pictures can be found with the auction. -dc 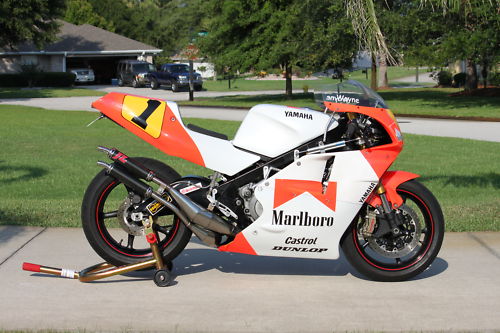 Did you do a double take? Wayne Rainey might have to look closely to make sure something with two wheels isn’t missing from his house. We’ve had a couple of top shelf replica builds on RSBFS and each one seems to get better. This one should be hard to top. 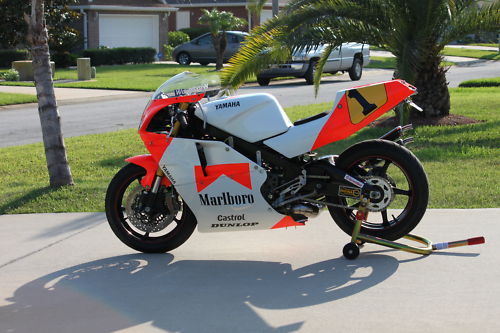 The YZR500 replica bodywork really makes the bike. According to the seller they are an exact copy molded from a set off a YZR500. Nice! Bodywork can be a real pain in the behind when trying to make your project look like something that rolled out of a factories R&D department. 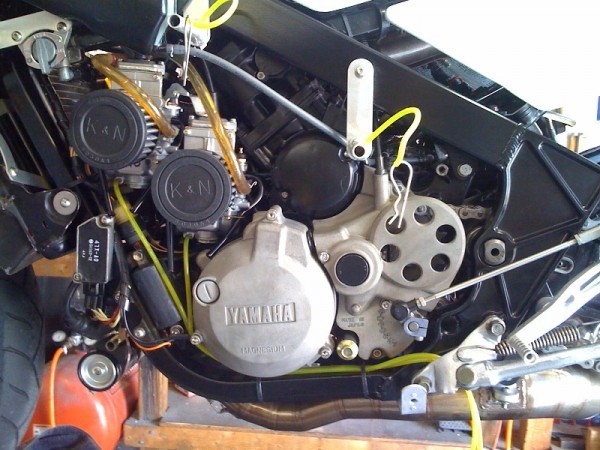 Yep, it has been rebuilt and breathed on. 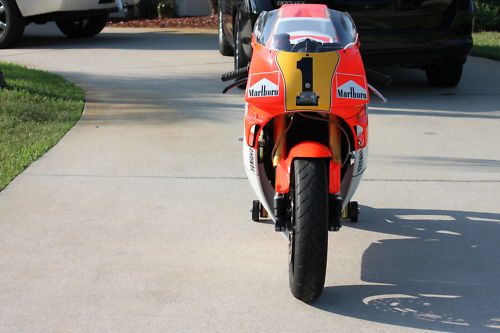 Take a breath, here are the details

As a young impressionable man growing up, I have very fond memories of watching the Moto GP 500cc two stroke Grand Prix racing. The fastest riders in the world on the fastest machines. Kenny Roberts, Eddie Lawson, Wayne Rainey, Kevin Schwantz. It was a special time in racing. My fist bike, a 1984 Yamaha RZ350 was as close as I could get to those incredible machines. Yamaha, of course, never offered the YZR 500 to the public. It was the pinnacle of their race technology.

About 5 years ago I began the project of building a replica of the 1991 Yamaha YZR 500, as raced by the great Wayne Rainey. No expense was spared in this incredible build. What does it take, besides big $$$, to complete such a build.

First and foremost, I commissioned master bike builder and fabricator Wyn Belorusky for the build. Wyn can fabricate just about anything out of billet aluminum. In addition, he built for himself a YZR500 replica which has been featured in several magazines internationally.

Finding a titled frame was not easy, but patience pays off. A real Japanese RZV500 frame, which is the lighter aluminum version of the RZ500 steel frame offered elsewhere. 11 digit VIN, titled in Florida, in my name. The sub frame has been modified by Wyn. He installed custom billet Y supports, eliminating the stock sub frame bracing to clean up the rear of the bike for use with YZR bodywork. After all machine work was complete, the frame was freshly powder coated black.

Aprilla RS250 gull wing swingarm. This is an ideal choice, having the same length as the stock RZV swing arm, with the look of the YZR 500. Extensive modification was performed by Wyn to fit this swing arm to the RZV frame, shock linkage, and rear brake hanger. Once fabrication was completed, the swingarm was also freshly powder coated black.

I started with a complete low kilometer stock RZV500 motor, bench stock from Mr. Belorusky, thank you very much. The motor was crated and shipped to Martin Marino of Madmann Engineering. Along with the motor I purchased and supplied a complete Brand New Yamaha OEM top end, Brand new Yamaha RZV500 cranks, new clutch, and new OEM Yamaha gaskets. Martin did a full high performance build with mostly brand new parts to work with. His porting, milling, and modification to the reed cages makes these motors come alive! Check out his link.

It’s set up for premix in its current state per Martin’s recommendation. I have an oil reservoir and set up to run the oil injection, which will be included in the auction, should the new owner wish to run the injector. It can run safely on 93 octane, but the motor does like the race gas. Additionally, brand new mikuni 28mm flat slides were purchased and installed, along with K&N individual filters, and new throttle cables. The motor makes great power, is jetted just a little rich to be on the same side (I’m at sea level in Florida) and runs cool. The stock RZ has a habit of the rear cylinders running hot. Rick Lance added an accessory radiator to allow additional cooling of the rear cylinders

Jim Lomas stainless steel GP chambers, with carbon fiber canisters. Built to order in Czechoslovakia, the quality and workmanship is amazing. The sound, weight savings, and performance are equally impressive. Wyn did a beautiful job in modifying the exhaust hangers on the pipes to fit with the new swing arm, and the upper pipes were gently molded to slightly point inward to replicate the upper YZR pipes on Rainey’s bike

Many years ago, Wyn was fortunate enough to borrow a set of REAL Yamaha YZR bodywork from a 1991 works bike, just long enough to make molds. Genius! From these very molds comes the bodywork on my bike. It’s the real deal. The custom brackets Wyn fabricated for mounting the bodywork is nothing short of artwork. Additionally, all quick release pins and real Dzus fasteners were used. Careful custom modifications were performed to allow installation of the functional headlight and tail light. A custom windscreen was fabricated as well, which fits perfectly.

I saw Rainey’s 1991 YZR500 in Laguna at the 2005 MotoGP, and took many pictures. This was an invaluable reference point for the build, particularly matching the color and logos. Paint by Paula in Titusville, Florida performed the paint work. She used a very rich pearl white, along with a day glow orange (from the house of color) to match Rainey’s bike. No decals were used; all work was done with paint. It does look sweet, and correct to Rainey’s 1991 YZR500.

The rearsets are custom fabricated by Wyn Belorusky. Included are two separate sets of rearset brackets, one for the stock position as pictured, and a set for the full race position. I initially had the race ones made, but then subsequently had a stock set made as I have only ridden the bike on the street. Again, both sets are included. They are beautiful. Wyn even machined the right side foot peg to fold up, to allow for clearance of the kickstarter when starting (like the stock RZV right side foot peg does). It’s the details that I love!

The dash was a custom fabrication setup with the tachometer mounted, a Daytona digital Temp gauge, and a GPS which can be used as a speedometer.

The sprocket cover was modified, by shortening the rear portion and milling out the holes. It turned out sweet. The right side engine cover, water pump, and left side sprocket cover were also sand blasted to give the appropriate GP look.

Wyn took the wiring harness and stripped any unnecessary wires, then cleanly wrapped and reinstalled all wiring. It’s very neat.

I really can’t even come close to listing all the fine details that went into this incredible build. I have many many pictures documenting the entire build. The bike needs a home with someone who appreciates what went into this project to achieve this final result. It’s awesome.. 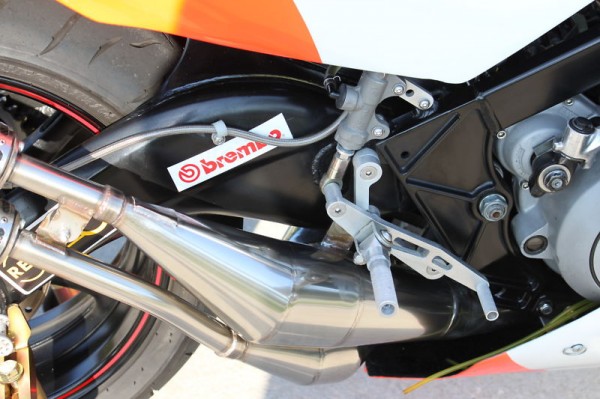 Everyone who does a build should do it for themselves first and foremost. I say that because I will nit pick here. My nit picky point being, if you spent all the money to replicate a 1991 YZR500, shouldn’t the pipes look period? Mild steel (or titanium if $$$ is no question) for the pipes would do the trick. A totally personal choice, just wondering since so much detail went into the bike. 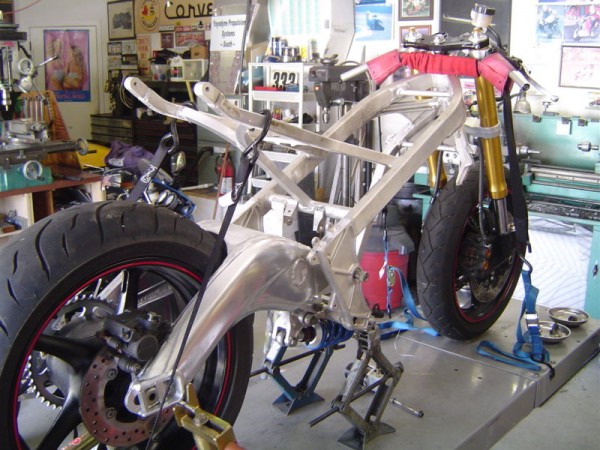 They don’t get built overnight. That’s a RZV frame not the more common RZ500 frame. I’ve always thought it would be cool to track down an old Harris or ROC YZR frame and use that for the base of a YZR replica. If you’d like to drool a little more, check these replicas out of Australia out. I think you can buy the frames seperatley if you are do it yourselfer. 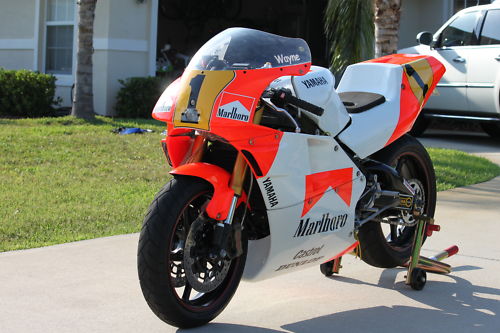 Remember, it is road legal too. I hope all the bargain hunters stopped reading a long time ago. I would be surprised if the reserve on this bad boy isn’t in the mid twenties. On one hand I say it is completely worth it. It is an absolutely beautiful bike that a lot of care, time and money was invested into. On the other hand after you get past the good looks and expert craftmanship you still have a spindly mid 80’s frame hiding in there. When you get into high dollar builds there are options out there, like the Aussie built replicas. Don’t get me wrong, I love the bike, I’m just sayin…… To get in the mix on this beautiful bike, simply click here. 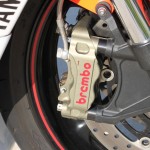 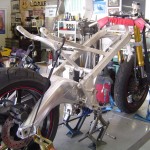 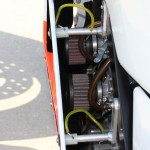 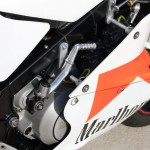 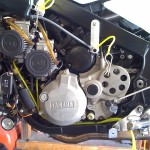 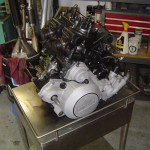 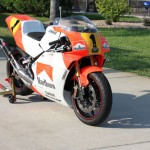 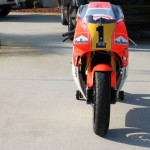 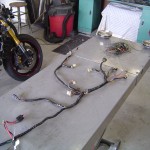 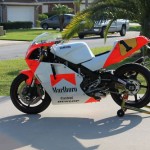 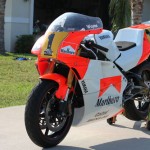 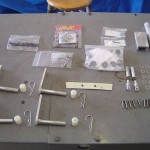 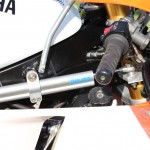 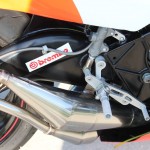 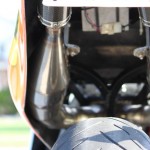 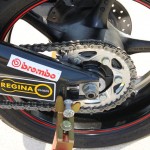 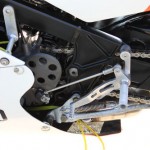 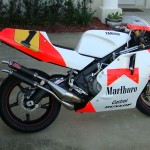 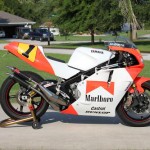 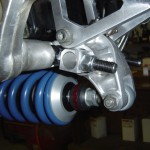 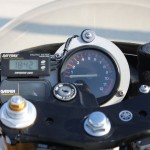