How will the market of Sport Bikes look in the future ? Who will be the target customers ? What should a new generation street motorbike deliver ? I guess this is what many OEM’s  R&D and marketing departments ask themselves regularly. What we know, is that we don’t know. We can only observe the economic development of the globalized market, look at the macro trends, make models…Some important changes have already happened:

– two stroke bikes disappeared and were replaced by heavier 4 strokes
– in urban environments, scooters replaced motorbikes
– Apple invented the iPhone and iPad, somebody invented Facebook and as a consequence, kids now dream of the latest tech gadget and spend their time in the semi-virtual and comfortable world given by social media

I was born in 1974 in Italy and when I was 16 I, like many other teenagers, dreamt of only one thing: a 125cc sport bike. Here I run the risk to become nostalgic and this is not the tone I want to set today. One thing is sure, in some parts of he world and at a given period of time, 125cc street bikes were a huge milestone in motorcycle’s industry and shaped the rider’s of today’s Superbikes. I was reflecting about this last night. Suddenly a rush of memories came to my mind and there is so much I want to say that I promise, I will write a dedicated feature on this topic alone. For the moment, I’ll limit myself by saying that 125cc 2 stroke bikes like the one spotted up North all the way in Norway (thanks Kjartan !) represent the actual boundary of the “real” motorbikes. 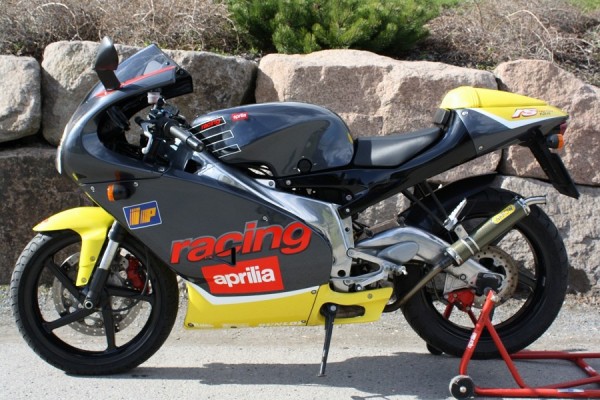 They define the entry into proper sport bikes. In many ways they have nothing less than a 750cc or a thousand Superbike. They are only scaled down, have components dimensioned for their weight and have only one cylinder. This Aprilia RS 125 is one the latest produced. With over 30 hp stock (in countries were this was allowed), and with the possibility to extract an extra 4-5 horses with a bit of tuning, the RS is not a toy. This bike is fast enough to reach speeds above 150 km/h, it has a great chassis and powerful brakes. Put in the wrong hands of a novel rider, who didn’t ride 50cc before and you are potentially putting him at risk. With such a 2 stroke you will discover that trying to impress your mates by giving it a go at WOT (wide open throttle) will soon (well…once the engine speed has reached a certain RPM) catapult you into speeds that you didn’t expect and have never experienced before on your friend’s scooter. If you are not riding this as your very first street bike, then you might dare a bit more. You know that this is a capable little motorbike. You will maintain the engine spinning around the “sweet spot” and enjoy the handling of it by pulling moderate late breaking and huge lean angles into the corners to keep momentum. Riding a 2 stroke fast, is all about understanding the limited power band and exploiting the light weight. If you look at the former 125cc Moto GP bikes, they do not produce much more power than this RS, they are only a lot lighter and totally uncomfortable for anyone taller and heavier than a 12 year old child. 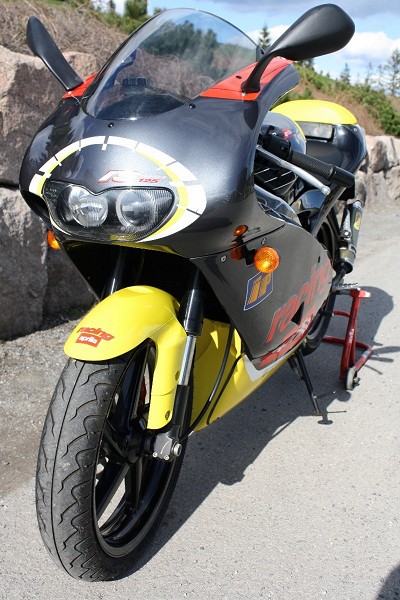 Let’s go back to the Aprilia in Norway and let’s hear it from the seller:

Very rare opportunity!! One owner Aprilia RS 125 full power version for sale due to moving abroad. This bike is shipped from the factory with over 30 excitable HK and is registered as middleclass. Has been in possession of adult enthusiast and has only done 100 mil, there is not a lot of these. If you wish for a spiky middleclass,  try the same type of motorcycle that Valentino Rossi was first championship at the start of his career. Only serious inquiries. Price can be discussed at any prompt decision. I have some extra Aprilia equipment laying around. 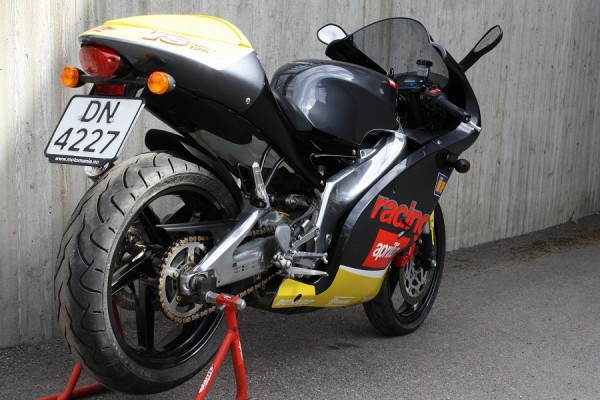 The condition is practically new and the Arrow exhaust is a nice touch that will make the RS sound sharp and serious as it should be. It is available at the price of  … equivalent to about 3900 € and as the seller says, there could be more Aprilia staff for you in case of interest 🙂 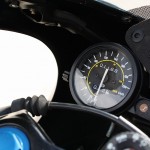 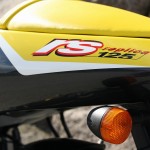 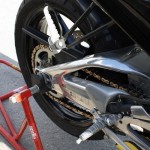 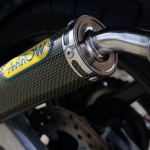 For more details or if you are interested in having it in your garage, please click the link below: