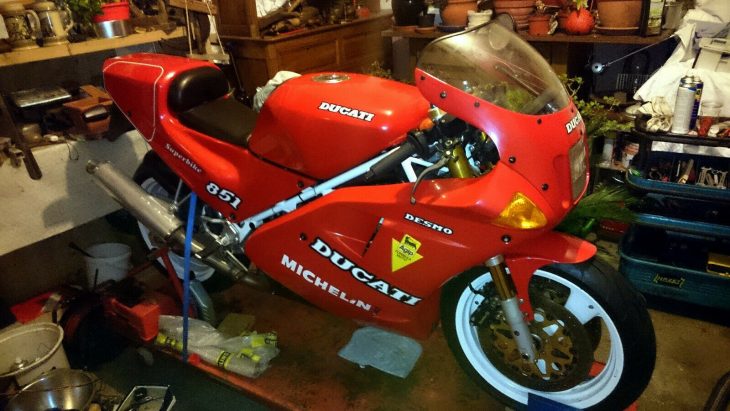 You’d think at a $55,000 ask, it wouldn’t be beyond the pale to ask for more than two photos of a motorcycle, but what do we know? And, be that as it may, most motorcycles are not the 1990 Ducati 851 SP2, a rare-as-rocking-horse-poo repli-racer from Ducati’s renaissance as a superbike racing brand.

As the name implies, this was the second evolution of the 851 Sport Production, and came with bigger valves, a 45mm Termignoni exhaust and fully-adjustable Ohlins suspension on both ends. The four-valve liquid-cooled v-twin in the standard 851 was exotic enough for most, but the SP2 mill was truly special, pushing out nigh on 120 horsepower from two cylinders at a time when that was an impressive figure from four pots.

Unfortunately, the pictures don’t do much justice to this machine, though it appears to be in very clean condition with a set of modern Michelin tires. The shot of the triple clamp matches the description’s claim that this is bike number 250. shipping we inform when real intrest from Ducatisti and real price.(make offer)

The asking price is a little eye-watering, but you’ll be hard pressed to find another 1990 Ducati 851 SP2, and there is no doubting the heritage and provenance the bike carries.