Here is one that will appeal to riding collectors, a 1983 Yamaha RD500LC, more commonly known as the RZ500.  Never brought into the states, this particular unit is listed as having been imported from Australia and appears to be excellent condition, although not 100% OEM. Some readers may wonder why the RZ500 is prized by collectors.  After all, 500cc isn’t a lot of displacement by today’s standards.   But what is forgotten is that the 500cc two strokes dominated motorcycle racing for almost three decades.  Due to the smaller engines, these bikes were fast.  I mean really fast.  Towards the end of the two stroke era companies were building two strokes that weighed about 130kgs (286lbs) and produced almost 200hp.  It should perhaps not be surprising that these bikes developed nicknames such as “the Unrideables”… “Death on wheels”… “The biggest, baddest, most evil racing motorcycles ever to see a race track.” This California RZ has had a startling amount of improvements, engine rebuilt, intake, cooling, and exhaust systems either new or rebuilt, but the whopper is the set of late-model R6 forks and swingarm tailored for it.  With refreshed drivetrain and 30-odd years of suspension and braking improvements aboard, this might be the 500 two-stroke experience without the age-related foibles of a “classic” superbike.  Here is the owner’s list from the eBay auction:

*New radiator and hoses. Automatic and manual fan on switch,

*Newly repainted and braced, side and bottom panels Obviously not meant for the display or museum, this is a rider’s RZ.  The experience of accelerating a 500cc two stroke cannot be replicated, and it’s nice to know this one can brake and turn its way out of a jam.  California registration is just the cherry on top.  Occasionally you hear that a leading manufacturer should re-introduce their classic bike, sports or muscle car with some up-to-date technology – this might be the next best thing… 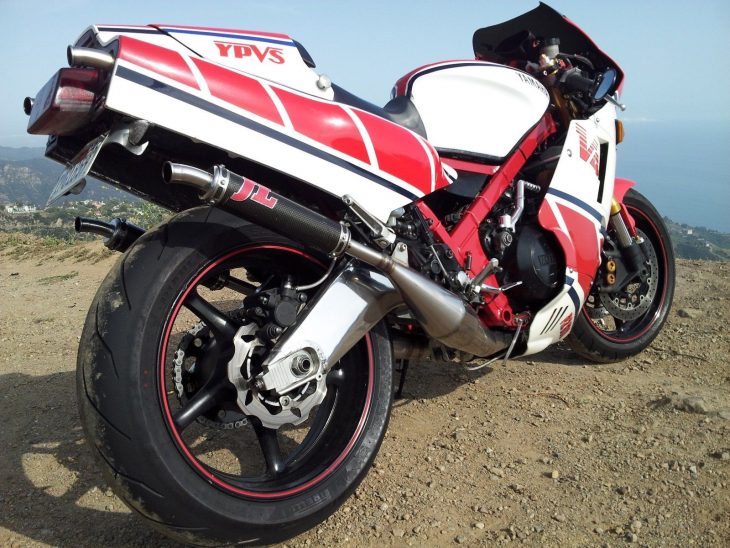