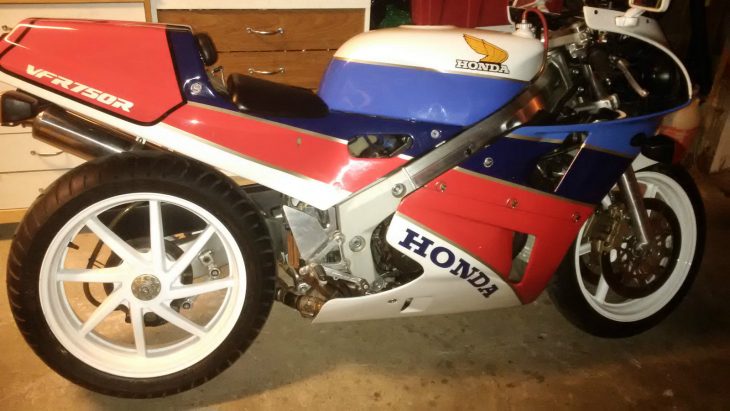 The RC30 is a bike that every serious collector wants to own at one point, and for good reason – it was about as true a homologation bike as was ever produced.  The RC30, also known as the VFR750R, came with what was at the time unheard of specs for a street bike; titanium and magnesium cast components, track-type “slipper” clutch, a first gear designed for track starts up to 80 mph, a single-sided swingarm, etc.

The story of how the RC30 originated usually goes something like Soichiro Honda declaring he wanted to show the world what Honda could do if decided to put all its efforts towards producing a no-holds-barred sports bike and that the mandate was that there would be no compromise, no corners cut, and no bowing to the bean counters.  In short, the mandate was that the bike was to be the best and the result was the RC30, a bike built to win…and win it most certainly did.   The RC30 carried “Flying” Fred Merkel to consecutive WSB titles in 1988 and 1989, and powered Steve Hislop around the famous Isle of Man TT course at a then unheard of/first 120-mph lap.  How dominate was the RC30?  Think of it this way – in 1990 fifteen of the 25 finishers in the top F1 class were on the VFR750R/RC30.

A good review of the RC30 by visordown.com can be read here. 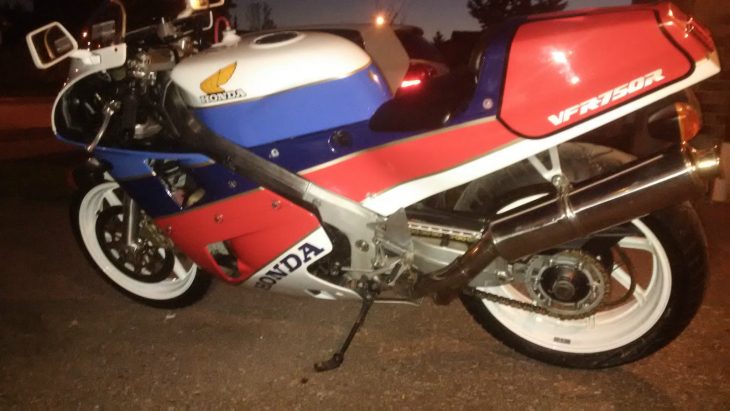 Given its been over 25 years since this bike was introduced, the RC30 ought to look and sound dated, but its elegant lines and tiny size (more like a big 250cc 2-stroke than a full 750cc 4-stroke) produce a stunning reaction even today.  Perhaps what keeps the RC30 an object of lust is the way it puts everything together; incredible feel from the suspension, outstanding build quality, a stupendously wide and usable powerband and the lightest weight in its class allowed the the 750cc powered machine to pretty much make the competition look stupid.  The only downside was that that all this top shelf performance didn’t come cheap. The RC30 was priced at an eye popping $21,000 in 1990 (about $39,000 USD in today’s dollars).

To put it simply, the word masterpiece can be commonplace when describing a rare sportbike, but in the case of the RC30 it was and still is truly justified. This particular RC30 looks to be in good condition but I really wish the seller hadn’t taken the pictures at night, had used a higher quality camera, and somehow changed the flash results.  Overall the bike looks to be OEM with the possible exception of a cut rear fender?  Also the tires look a bit off, perhaps the rear wheel is non stock?

Note:  The RC30 had different trim based on the destination country and while this particular model appears to be the dual headlight US version, it might actually be a bike produced specifically for the Canadian market (supposedly there was about 25 of these).  Unfortunately, the seller is not providing ownership history info and there is a somewhat ominous “rebuilt due to age” reference which could mean anything from a fluid change to a former track bike. 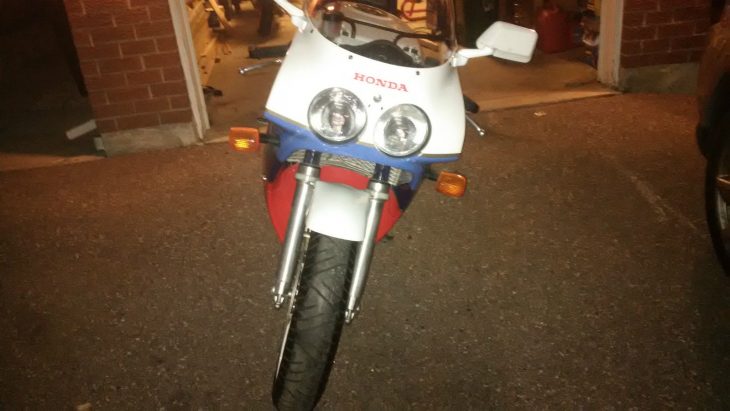 Current bid price on this is only about $14,000 USD but that given that we have seen recent posts range from $22,000 to over $28,000 USD, I expect price on this one to jump.  To be honest I not sure if this is a bike produced specifically for the Canadian market or if this is a US bike (only 300 of these were reported as coming into the USA) but regardless, this one will probably hold its value over time.

Here at RSBFS we have some regular readers who will be able to offer better insight on the current fair price for this RC30, so if its time for you to add one to your collection, I suggest you check out the the comments on this post or the previous RSBFS posts linked above.  But anyone who is seriously interested will want to be quick as eBay auctions of these bikes often end early.   I would also be curious to hear from anyone who has imported a bike from Canada to the USA, suggestions for shipping companies…no reason…nothing to see here…move along now…